Preventing radical Islam from gaining a foothold in North Africa and the Middle East is a matter of survival. 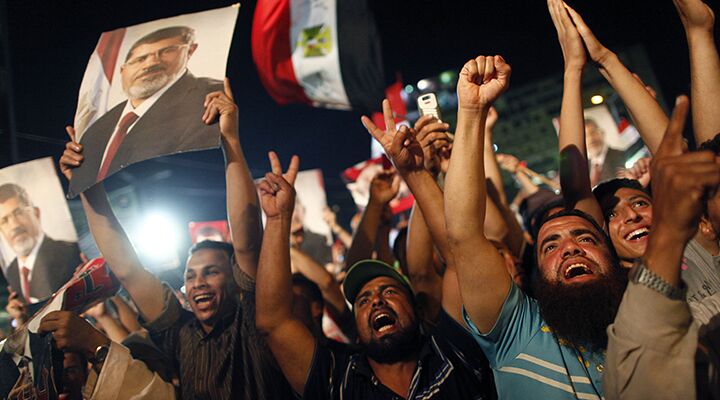 Preventing radical Islam from gaining a foothold in North Africa and the Middle East is a matter of survival.
From The April 2011 Philadelphia Trumpet
View Issue FREE Subscription

In the world of geopolitics, the map is a prophetic instrument.

Consider the political upheavals in Egypt, and the inevitable emergence of the Muslim Brotherhood in Cairo’s new government. More broadly, consider radical Islam’s growing presence and influence in places like Algeria, Tunisia, Libya, Ethiopia, Eritrea, Somalia, Yemen, Iraq, Lebanon and Pakistan. As extremist Islamic forces gain footholds in these countries, will they provoke transformations beyond the Middle East and North Africa? If so, where?

For the answers, we need only study a world map. What quickly becomes apparent is radical Islam’s rise as a potent and controlling force in the southern and eastern Mediterranean. And which region, outside that theater, does this trend threaten more than any other? In virtually every conceivable way—politically, economically, strategically, demographically, culturally—it threatensEurope!

As Egypt exploded in February, the Guardian’s Timothy Garton Ash, in an article aptly titled “If This Is Young Arabs’ 1989, Europe Must Be Ready With a Bold Response,” warned that if violent, anti-Western Islamic forces gain the upper hand in Egypt and throughout North Africa, “producing so many new Irans,” then “heaven help us all” (February 2; emphasis mine throughout). The stakes in the Mediterranean could hardly be higher for Europe, Ash stated: “If that does not add up to a vital European interest, I don’t know what does.”

Shamefully, few other commentators have analyzed the rise of radical Islam in the Arab world in this context. Some of Europe’s leaders, though, know precisely what is at stake. On February 4, for example, former German Foreign Minister Joschka Fischer, in an article that warranted more attention than it received, warned it was time for Europe to think “geopolitically, not just fiscally, about the Mediterranean.”

In a glimpse of how European elites are digesting events in Egypt, Fischer said that “what the European Union is facing in the Mediterranean region isn’t primarily a currency problem; first and foremost, it is a strategic problem—one that requires finding solutions urgently.”

To understand Fischer’s alarm, consider a map of the Mediterranean (pages 2-3). What quickly becomes evident is that radical Islam, under Iran’s direction, is gaining control of strategic assets vital to Europe!

One of Europe’s most important strategic assets is the Strait of Gibraltar. Situated on Spain’s southern tip, dividing Europe from Africa, this sea-lane is the gateway into the Mediterranean Sea. Each year more than 80,000 vessels—many carrying goods to and from the shores of Europe’s largest economies, particularly Spain, Italy and Greece—transit the maritime gateway. The deep-water Port of Gibraltar is one of the busiest and most important in Europe.

From Gibraltar, one can peer across less than 15 miles of ocean and see Morocco, a bustling nation of 31 million, 98 percent of whom are Muslim. Morocco’s government and populace are relatively stable, but experts say Islamic terrorist organizations in recent years have taken root in the country. Some have joined forces with drug cartels smuggling their wares into Europe. Others are actively working to overthrow the Moroccan government.

More worryingly for Europe, radical Islam is gaining power in neighboring Algeria, both as a terrorist force and through various political entities. Following the protests in Tunisia and Egypt, protesters hit the streets in Algeria demanding the removal of strongman President Abdelaziz Bouteflika, who since 1999 has governed under a state of emergency rule. And the country has emerged as a terrorist mecca. According to former cia official and counterterrorism expert Charles Allen, al Qaeda is using Algeria as a breeding ground.

Al Qaeda “functions as an umbrella organization for a disparate collection of Sunni Muslim terrorist elements determined to attack what they see as apostate regimes in Algeria, Tunisia, Libya, Mauritania and Morocco,” Allen said. Another expert said the region is emerging as al Qaeda’s next Afghanistan.

For Europe, the rising dominance of radical Islam in territory adjacent to its most crucial sea-lane amounts to a majorstrategic threat!

A thousand miles east of Gibraltar is Tunisia. Apparently, this country, after the recent ousting of its authoritarian president, is embracing the democratic election of a new government. No one knows what it will look like, but experts expect Islamist political parties to emerge with considerable influence, particularly Ennahdha, the leading Islamist party—known for its anti-Western, extremist roots.

From Tunisia, the shores of Sicily are a little over 150 miles away. That region has historically been a staging ground for armies seeking to invade Europe via the Italian peninsula. For Europe, the emergence of a government in Tunisia that identifies with radical Islam and allows the nation to become a launch pad for radical Islam into Europe would be a strategic threat!

Then there’s the Suez Canal, which bisects Egypt, connecting the Mediterranean with the Red Sea and Indian Ocean. Each day, 2 to 3 million barrels of oil and fuel products pass through the canal and the energy pipelines that transit the Suez desert, which is controlled by Egypt. About two thirds of that energy ends up in Europe, where it accounts for 5 to 7 percent of the Continent’s oil consumption. If radical Islam, via the Muslim Brotherhood, gains power in Cairo, it could shut down the Suez.

For Europe, the transfer of the Suez Canal into the hands of radical Islam would be a strategic and financial catastrophe!

But it’s not just the Suez that poses a potential vulnerability for Europe. Radical Islam has also established a presence, in most cases decisively, in Eritrea, Ethiopia, Somalia and Yemen. Except for Ethiopia, each of these countries is adjacent to the Red Sea or the Gulf of Aden, the vital sea-lanes connecting the Arabian and Mediterranean seas—connecting Asia with Europe. In addition to their role as maritime highways, the Red Sea and Gulf of Aden contain vital ports from which Middle Eastern oil is shipped to the world.

For Europe, the thought of the entire Red Sea region falling under the control of radical Islam is a strategic and economic nightmare!

Another sliver of territory crucial to Europe is the Dardanelle Strait and the Sea of Marmara, which connect the Black Sea to the Mediterranean. Historically, these have generally marked the line between Europe and the Middle East. Today, these vital sea-lanes are controlled by Turkey. Since World War i, this nation has been a secular state nurturing warm relations with the West, especially Europe. As long as Turkey remained a secular, pro-Western state, Europe had no need to worry about the sea-lanes.

In recent years, however, Turkey has raised concern in Europe. Hardline Islamist forces have gained greater religious and political influence. More worryingly, Istanbul seems to be losing interest in its relations with the West, including Europe, and instead prioritizing its relations with its Muslim neighbors, particularly Iran. In February, after Iran and Turkey concluded discussions and deals further strengthening ties, Iran’s parliamentary speaker Ali Larijani gloated that “strategic cooperation between the two countries contributes to regional and global peace and stability.”

Europe doesn’t believe that. For Europe, the thought of Iran’s mullahs exploiting relations with Turkey to meddle in the Dardanelles and the Black Sea is deeply alarming!

Furthermore, as Turkey continues to gravitate toward Iran, expect tension between Europe and Turkey over control of Cyprus to intensify. The island nation is a member of the European Union, but over a third of it is controlled by Turkey and considers itself a separate Turkish republic.

Europe recognizes Cyprus’s strategic position—at the crossroads of the Aegean and Mediterranean, and adjacent to the volatile Middle East—and its crucial role in past European ventures into the Mideast and North Africa.

As Turkey slides toward Iran, expect Europe to step up efforts to reclaim the whole of Cyprus!

In recent months, radical Islam has intensified its attacks on Christians around the world, particularly in Muslim nations. Most people in the West have only recently woken to this war, and largely as a result of the brutal bombing of Coptic Christians in Alexandria, Egypt, on New Year’s Eve. But in the last few months, hundreds of Catholics have been killed or injured by radical Islamic terrorists, from Russia to the Philippines, Nigeria to Pakistan. It is reaching the point where Pope Benedict xvi and Catholic Europe are bound to respond forcefully to these attacks!

Second, the growth inside Europe of Muslim communities, many of which shelter small but dangerous radical Islamic camps, is impelling Europeans to look for ways to preserve European culture and institutions. The last few months have witnessed a noticeable rise in anti-Muslim attitudes throughout the Continent. In February, several European leaders, including French President Nicolas Sarkozy and German Chancellor Angela Merkel, declared publicly that multiculturalism in Europe has failed. After visiting Europe in February, Daniel Pipes, an Islamic affairs expert, reported, “Perhaps alone in the coterie focused on the Islamist threat to Europe, I am cheerful these days. That’s because I see the anti-Islamist reaction growing even more quickly than the Islamist threat itself.”

The Time Is Right

Truly, when you look at the map and consider the rise of radical Islam, it’s difficult to exaggerate just how much is at stake for Europe in the Mediterranean. Historically, the Mediterranean Sea belongs to Europe. Strategically, the Strait of Gibraltar, the coast of Tunisia, the Suez Canal and Red Sea, the Dardanelles and Cyprus are vital to Europe’s national security.

Since the start of this year, it has become obvious that radical Islam—a vehemently anti-Western, violent, aggressive and uncompromising force—is campaigning to seize control of Europe’s southern flank. Iran is at the vanguard of this uprising.

As reality sinks in, Europe is realizing: Inaction is not an option!

This explains why Joschka Fischer is imploring Europe to seriously engage governments in North Africa and the Middle East that have yet to come under radical Islamic influence. “European officials in Brussels and the major European Union governments should not go for political and economic half-measures when it comes to the Mediterranean states,” he wrote. The EU is certain, sometime soon, to heed Fischer’s advice. It has too much at stake not to!

More significantly, the rise of radical Islam in the Mediterranean—the region Winston Churchill termed Europe’s soft underbelly—will serve as a powerful impetus for Europe to continue to forge itself into a streamlined and dominant political, economic and military superstate. Be assured, events in Egypt are showing Europe that if it wants to survive as a unified power—if it wants continued access to energy and resources from Africa and the Middle East—if it wants to stop radical Islam’s war on Christians—if it wants to purge Islamic extremists from the Continent—then it must summon the political and military will and might to confront Iran and its radical Islamic proxies.

Watch Europe closely. It knows the window of opportunity to tackle radical Islam’s mounting armies is closing. It is about to reclaim the Mediterranean!