Regime change is the answer. But not as most may think! 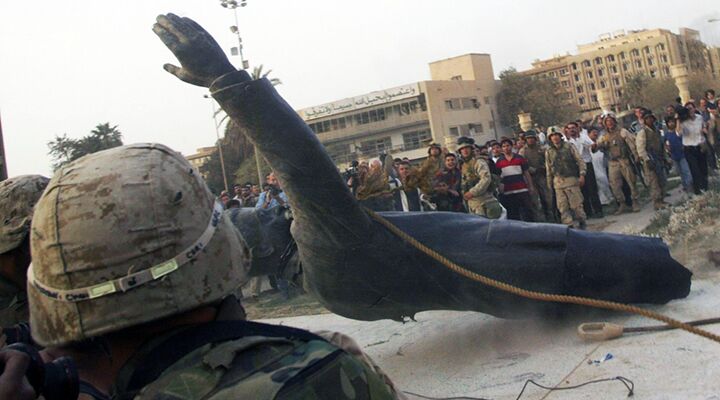 Regime change is the answer. But not as most may think!

There have been few moments in televised history like it. After the months of weapons inspections, diplomatic spats, anti-war protests and the inevitable military campaign, finally the ceaseless press coverage climaxed with historic footage—scenes of a toppled dictatorship. Not only were Iraqis defacing icons of the previous regime, they were cheering for the American-led coalition. Iraqis young and old waved crude drawings of American flags, pictures of President Bush and signs of gratitude at coalition troops.

At last, it seemed, Iraqis had the hope of freedom and democracy.

But is that hope rooted in stable ground?

Winston Churchill called democracy the worst form of government, except all the others that have been tried. Granted, anything would be better than the terrifying tyranny of Saddam and his cohorts, but what’s next? Is there now hope for Iraq?

Is the democratization of a country the sign of ultimate progress? Countries in the Middle East with a form of democracy, like Turkey, don’t necessarily use that democracy to further relations with the U.S. or the West. The Muslim majorities have used democracy to bring in leaders who represent the growing right wing of the Islamic world, something many suspect will happen in Iraq.

How will Iraq use its political freedom? How will it use its liberation? The pro-U.S. celebrations quickly gave way to severe looting and, soon after, anti-American protests—some even ending bloodily. The euphoria was replaced with the stark reality of a tough road ahead to restore order to this troubled nation.

No one doubted the outcome of the U.S.’s military campaign—but the post-victory plan remains hopelessly vague. The power vacuum—with the American military and Iraqi civilian authority awkwardly fidgeting over the balance of American influence and Iraqi leadership—has created division and chaos. New political parties are trying to fill the void. The Kurds in the north are complicating issues as they strive to create their own state, while the majority Shiites are making their religious resurgence—warning Iraqis against collapsing morally before “the Great Satan.”

The U.S.’s responsibility is to establish a democratic government that represents the current hodge-podge of groups currently competing for power. Iraq may be better off than under Saddam, but how much better? Will Iraqis ever experience real prosperity and peace? Can they afford real hope?

As rich with biblical history as Iraq is—being the birthplace of Abraham and the center of the world-ruling empire of Babylon—its land will also showcase the fulfillment of some of the most dramatic biblical prophecy ever. When Jesus Christ returns, He will face severe opposition from world rulers (Rev. 11:15, 18). The “nations [will be] angry.” Armies will gather at Armageddon to meet Christ and His spiritual hosts. Revelation 16:12 says a supernatural plague will dry up Iraq’s Euphrates River to make way for an Asian conglomerate to meet at Armageddon.

Project your mind ahead to this time. When Christ returns, He will end, once and for all, six excruciating millennia of man ruling over man—which will have culminated in humanity’s worst time of suffering ever. The world will have just been ravaged by nuclear world war, brought to the brink of self-annihilation (Matt. 24:21-22) and trampled by a massive geopolitical beast (Rev. 13 and 17) led by a tyrannical madman who will make Adolf Hitler and Saddam Hussein look like spoiled children.

Christ’s return will be the real “Operation Iraqi Freedom”—to rid the world of all dictators, set up a perfect government based on His law of love, and show the entire world what true freedom and liberation really are. Isaiah 11:4 depicts this: “But with righteousness shall he judge the poor, and reprove with equity for the meek of the earth: and he shall smite the earth with the rod of his mouth, and with the breath of his lips shall he slay the wicked.”

He won’t set up a democracy. He won’t install Iraq’s former political outcasts into the top positions. He won’t set up the nuts and bolts of the new regime and then leave it to men to maintain it.

After the initial anger and rebellion from the world’s rulers at His return—which will be quickly squelched by the ultimate “shock and awe” of the supreme power of God (Rev. 19:11-16)—the people will rejoice at His return! The images we saw of Iraqis cheering for Bush and waving American flags were only a hint of the real joy that will begin to permeate the lives of those who live under Christ’s perfect, loving reign. As Proverbs 29:2 states, “When the righteous are in authority, the people rejoice: but when the wicked beareth rule, the people mourn.”

When Christ returns, He will bring true liberation and freedom to the entire world! He will come with His government already in place—a government being prepared right now within His true Church. His ousting of man’s pathetic regimes will leave no power vacuum—no room for looting or protests.

Man will finally learn, under God’s righteous rule, what true peace, liberty, freedom and happiness are.

What hope we can have in this great vision! This is the real hope of the Iraqi people—and the only hope for all mankind!