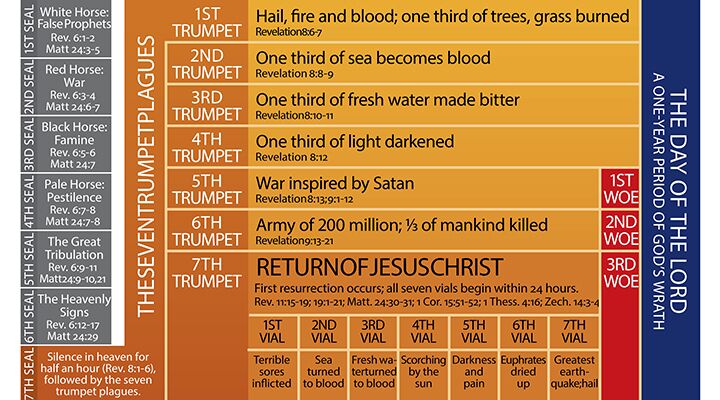 The Philadelphia Trumpet, in conjunction with the Herbert W. Armstrong College Bible Correspondence Course, presents this brief excursion into the fascinating study of the Bible. Simply turn to and read in your Bible each verse given in answer to the questions. You will be amazed at the new understanding gained from this short study!
From The February 2011 Philadelphia Trumpet
View Issue FREE Subscription

The state of our world was prophesied and written in advance. About 2,000 years ago, the greatest “newscaster” the world has ever known foretold today’s chaotic world conditions. He foresaw today’s scientific discoveries and technological advancements, and the radical changes they would effect on humanity. He foretold the wars, famines, disease epidemics and natural disasters now increasingly occurring before our very eyes.

This famous newscaster knew that men would produce the destructive forces that now threaten cosmocide! He warned: “For that will be a time of greater horror than anything the world has ever seen or will ever see again. In fact, unless that time of calamity is shortened, the entire human race will be destroyed” (Matthew 24:21-22; New Living Translation).

This great newscaster was Jesus Christ of Nazareth—the same Jesus who is coming again to intervene at the last moment to save humanity from extinction and establish world peace!

But before He intervenes, a number of catastrophic events that will impact all humanity must first occur.

These events are outlined in the book of Revelation. In the last two installments, we have learned that this last book of the Bible details “seven seals” that reveal events to occur in the years leading up the return of Christ (Revelation 5:9). The seventh seal contains seven symbolic trumpets (Revelation 8:1-6) that represent consecutive punishments from God on a rebellious mankind. And, as we saw last month, the fifth and sixth trumpets are also known as the first and second woes, signaling warfare between military powers in Europe and Asia.

Next in the sequence of events described in Revelation is the seventh trumpet.

1. What will happen when the seventh trumpet sounds and the third woe begins? Revelation 11:14-15. Who will then be given the kingdoms, or governments, of this world? Verse 15.

Comment: On the climactic day of Christ’s return, a myriad of events will take place at whirlwind speed. The very first event that occurs at this time is the coronation of Jesus Christ (Daniel 7:13-14), followed by the announcement at the trumpet blast that His government will finally replace those of Satan and man. Other events will take place at the moment of the seventh trumpet’s blast as well, as we will see later. But first, let’s notice what happens as Christ’s return to claim the Earth is noticed by the people of the world.

2. What will be the reaction of the nations of this world? Revelation 11:18.

Comment: Jesus Christ, the new world Ruler, will not be automatically accepted by the warring nations as the King of the Earth. The nations will actually gather their armies to challenge Christ. They will consider Him their common enemy, and will rage against Him for coming to take control of all earthly governments. They know that with Jesus Christ ruling, their human schemes can never be completed.

It is this climactic battle that will determine the outcome of World War iii, and who will rule the world!

3. Because men refuse to repent, will God continue to send each plague in sequence? Revelation 16:9, 11.

Comment: Despite the plagues, the majority of mankind will not turn to God in repentance right away.

4. How long will it take for all seven plagues to be administered? Revelation 18:8.

Comment: All seven vials against the disobedient will begin in one 24-hour day—the day ushered in by the blowing of the last trumpet. Some of these vials of wrath will continue to be administered beyond this 24-hour period. The combined power of these plagues will devastate the disobedient.

5. With the sixth plague, will God prepare the way for the kings of the east and their armies to cross the Euphrates into the Holy Land? Revelation 16:12. Is this part of God’s plan to gather the armies of all nations that remain rebellious to His government into one place for the final battle of World War iii? Verses 13-14. See also Zephaniah 3:8 and Joel 3:9-14.

Comment: Recall that the fifth and sixth trumpets are also called the first woe and second woe. In the first two woes, the beast power will attack, then be devastated by a counterattack from the kings of the east. But on the day of the seventh trumpet, when Christ returns to Jerusalem, both armies will unite to fight Him!

6. Will Christ make war in righteousness against those nations that fight Him and His armies? Revelation 19:11; Isaiah 11:4-5. Is Christ going to smite the nations with His sharp sword, symbolic of His divine power, and rule them with a rod of iron? Revelation 19:15.

7. Who will be defeated in this climactic battle of World War iii? Verses 19-20.

8. After all organized military resistance to the Kingdom of God has been crushed, will Christ then punish the leaders of this world’s political and religious system that warred against Him? Verse 20.

1. Are God’s angels who will pour out the seven last plagues upon Earth clothed in white linen, a symbol of righteous judgment? Revelation 15:6.

2. Does God have to punish mankind because their sins would eventually lead to the destruction of life on Earth? Zephaniah 1:17; Revelation 11:18.

Comment: God is love (1 John 4:16). God and Christ love all of humanity (John 3:16). But Christ will be angry at the sins of mankind when He returns. He is coming to punish—in love! Otherwise, man would destroy all life upon the planet! Power-mad politicians at the helm of human governments will have already destroyed much of the Earth, and unless God intervenes with force to stop warfare, no human would be left alive (Matthew 24:22).

3. Will the nations finally accept God and repent, and seek to learn His way? Isaiah 2:1-4.

Comment: The glorified Christ is coming in all the splendor, power and glory of God to stop escalating wars, nuclear mass destruction, human pain and suffering. He is coming to usher in a radically different, utterly transformed global order. God’s laws will be taught, embraced and enforced worldwide, which will result in peace, abundant prosperity, happiness and joy for all mankind.

Meanwhile, each of us can receive the blessings of God’s way of life and His protection now. But first we must come to see the catastrophic effects of sin as God does. Left unchecked, man’s sins would lead to the destruction of humanity. The events that occur at the seventh trumpet show how much God hates sin—and what He will do to finally eradicate it in the world. We must have this same attitude toward sin. That means coming to have a sincere willingness and earnest motivation to completely eliminate it from our own lives, just as Jesus Christ will utterly destroy the sin in the world at His return.

Those who turn to God and seek to do His will, instead of following the sinful ways of this world, will be given divine protection (Revelation 3:10; 12:14-16). You need not suffer any of the coming plagues!

This short study is a sample of the method employed in each lesson of the free Herbert W. Armstrong College Bible Correspondence Course. Over 50,000 people have enrolled in this exciting, dynamic course. Ordering information is on the back cover of this magazine.