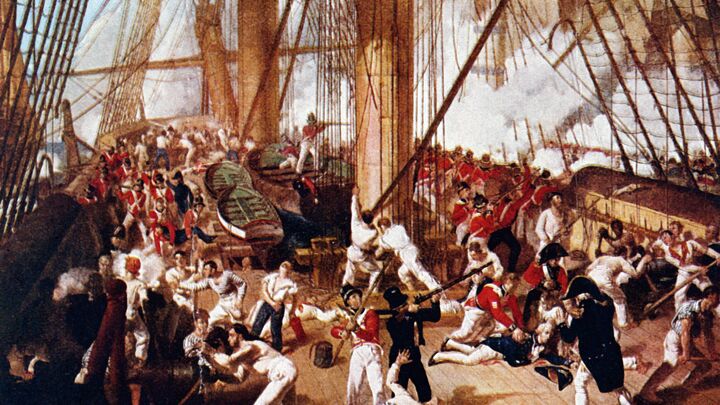 Britain’s history of miracles made it great. Its faith in Europe signals the end of its faith in God.

No nation outside of ancient Israel has experienced more cases of divine intervention than Great Britain. Just try to find one. And not just “little” everyday miracles either—although there have been plenty of those too—but history-altering events. Events that have no explanation but that of divine intervention. Miracles without which the nation would have ceased to exist.

Britain is turning its back on those miracles. Its people have forgotten, and its politicians are signing away the sovereignty of a nation that is only independent and free today because of those many miracles.

Remember the “Invincible Armada.” 1588: Only England stood in the way of Philip of Spain and his domination of Europe and the New World. The Spanish Armada was termed “invincible” for a reason: It was the most powerful military force in the world. Philip had 149 ships of the line. Britain had 80 ships total, of which 50 were volunteer vessels and some not much bigger than yachts. Even of the queen’s 30 warships, only four were equal in tonnage to the smallest Spanish galleons.

Against these overwhelming odds, the British fleet desperately engaged the Spaniards in an attempt to prevent a landing on the English coast. During the first major engagement at Calais, with the tide and wind in its favor, the British fleet performed amazingly. Three Spanish galleons sank and three others helplessly grounded on the French coast. The victory, however, came at a cost: The bulk of the Spanish fleet remained intact and the British were out of ammunition. The Brits had to return home for reinforcements; the English Channel was clear for the Spanish attack.

But the Channel crossing and attack did not come. Just six measly kilometers separated Britain from the Spanish invasion, but a work of destruction came from a force far greater than Britain’s navy. Severe wind and storm suddenly materialized, scattering and wrecking the Spanish ships. By the time the retreating Spaniards made it back to Spain, only 50 ships carrying a few thousand sick and disease-stricken men remained. The Spanish threat to Britain was over, and so was Spain’s era as a global power.

Remember Quiberon Bay. 1759: The French fleet was marshaled to invade England and the British fleet again was forced to sail to its defense. The battle began and again a heavy gale erupted. Some French ships were driven onto the shoals, others were sunk and captured, and the French Navy was massively defeated. Britain was saved once more.

Remember Napoleon. “Fifteen million [Britons] must give way to 40 millions,” Napoleon uttered in frustration. He assembled a massive fleet of transports and an army of 100,000 soldiers at Boulogne. Over 100,000 troops were readied elsewhere. “Let us be masters of the Channel for six hours and we are masters of the world,” he declared. But the date of invasion was delayed by the death of the admiral chosen to lead it, postponing departure just enough so that on Oct. 21, 1805, Nelson gained his astounding naval victory at Trafalgar against staggering odds—utterly shattering Napoleon’s plans for invasion.

“The Force Which Is Above Man”

Remember Waterloo. Author Victor Hugo observed that “the shadow of a mighty right hand is cast over Waterloo; it is the day of destiny, and the force which is above man produced that day.” “If it had not rained the night between the 17th and 18th of June,” noted Hugo, “the future of Europe would have been changed.” A little rain, during a time when rain was not expected, and an empire was overthrown.

Remember the miraculous appearance of the “White Cavalry” at Mons in 1918 that turned a rout into a victory.

Remember the miracle at Dunkirk and how, after a national day of prayer invoked by King George vi, the impossible happened. Surrounded and trapped between the Channel and German troops, the retreating Allies prepared to be slaughtered; meanwhile, Hitler commanded his Panzer tank divisions to hold off so that the Luftwaffe could have the honor of attacking the withdrawing Brits. But again, intervening weather including violent rain and wind grounded the German Air Force while wondrously leaving the Channel calm until the evacuation was complete. The water, uncannily smooth, allowed even small motor boats to rescue stranded soldiers. In Winston Churchill’s words, 335,000 British troops were delivered “out of the jaws of death and shame.”

Remember Operation Sea Lion and how, when Britain had an army without arms, it was protected from invasion.

Remember the Battle of Britain and how Hitler boasted he would “erase” British cities. More than a thousand German bombers and fighters pounded London during one night alone. The Royal Air Force was outnumbered by more than two to one, yet shot down more German planes.

Remember the sinking of the Bismarck.

Remember how Britain received its most bountiful harvests in 1942, when it faced shortages due to wartime interference with its offshore supply lines. R.S. Hudson, the minister of agriculture, said, “Some power has wrought a miracle in the English harvest fields this summer, for in this, our year of greatest need, the land has given us bread in greater abundance than we have ever known before.”

Remember the epic defense of Malta, Britain’s military base in the Mediterranean, and how that tiny island nation survived 2,000 bombing attacks over two years, holding out against all Europe and enabling the defeat of Rommel’s Desert Corps in the process.

Remember the miracle at El Alamein in Egypt, a time when, according to historian W.B. Grant, “all Islam and Christendom held its breath.” Churchill called the last-ditch stand at El Alamein a “moment in the presence of a recession of our hopes and prospects in the Middle East and in the Mediterranean unequaled since the fall of France.” But Rommel stopped just a few miles from defenseless Alexandria. Why? His water and fuel had run out. Had he reached El Alamein two days later, he would have found a completed water pipeline filled with fresh water. Instead he found the newly constructed water pipeline being tested with salt water; his men died of thirst. “Before El Alamein we never had a victory,” said Churchill. “After El Alamein we never had a defeat.”

Remember the miracle of D-Day and how, at the last possible moment during the windiest month in Normandy for 20 years, a break in the weather occurred that allowed the Allies to launch the invasion of Europe—and how, against fierce opposition, General Eisenhower took the risk. Had he delayed, as he was vehemently encouraged to do, the next launch window would have been June 18. June 18 began as a beautiful, calm day, but ended in a storm so fierce that the invasion could easily have been wrecked. Because of the predicted stormy weather on D-Day, the Germans were caught off guard.

“This day eight years ago, I made the most agonizing decision of my life,” Eisenhower later recalled. “If there were nothing else in my life to prove the existence of an almighty and merciful God, the events of the next 24 hours did it …. The greatest break in a terrible outlay of weather occurred the next day and allowed that great invasion to proceed, with losses far below those we had anticipated ….”

There is much to remember.

No modern nation has had as many life-preserving miracles as Great Britain. British history is filled with irrefutable examples of God-given deliverance and preservation. It should be so clear that even the blind can’t help but see.

Yet today, British politicians turn their back on that history and the countless miracles that have preserved their nation’s freedom.

Sadly, in what amounts to a treasonous act—at least by the spirit of the law if not the letter—UK politicians have signed away British sovereignty without even permitting a national referendum on the issue! On Dec. 13, 2007, Prime Minister Gordon Brown signed the constitutional Lisbon Treaty—a treaty that, in fact and in law, consolidated the transfer of British sovereignty to the European Union that was embedded in the earlier Maastricht Treaty.

British freedoms are vanishing as fast as the past miracles.

On September 6, Chancellor of the Exchequer George Osborne agreed to relinquish even more sovereignty. British national budgets will now be submitted to the European Union for review, and Britain is preparing to subject its banks to a European tax that will be collected in Brussels.

Will Britain ever remember its history?

The British people are now entering the most critical phase in their history. Stripped of empire, devoid of much of its material power, plagued by economic problems, its place as a great power lost, Britain—instead of looking to the God who miraculously ensured its freedom so many times throughout history—is looking to Europe for safety and security.

There was a time that Britons recognized the source of those miracles—and sought to obey their Author. Churchill believed that; Montgomery and Eisenhower believed it; the Sunday Times in 1945 believed it, as did the Daily Sketch in 1946, and the Daily Telegraph in 1947; so did untold thousands of British soldiers who experienced the miracles firsthand.

The Telegraph wrote on April 7, 1947: “And miracles happen still. How many of them have we not seen enacted before our very eyes in these past few years. The history of them is now in the writing ….”

Wake up, Britain! Remember your history!