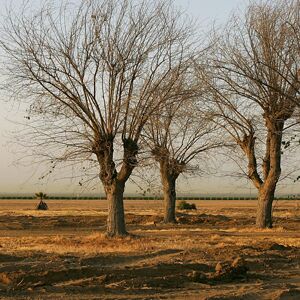 Just one bad harvest away from the unthinkable

This is an important question because more than ever the world is depending on America to feed it.

According to the Daily Mail, panic buying from Middle Eastern and African importers rocketed wheat prices up 70 percent and even risked sparking food wars.

Russia confirmed the fears of many: The world’s food supply is unnervingly precarious.

Yet, America’s foremost experts—at the Department of Agriculture—still claim that world wheat production will reach the same level as last year. Have no fear, American wheat is here! A projected bumper harvest in America will offset shortfalls almost everywhere else. Let’s hope they are right.

But the reality is, even if the Department of Agriculture experts are right, food surpluses in America are not something the world should count on.

Here is a statistic that should give everyone cause for concern. Donald Coxe, the chief strategist of Harris Investment Management, says that North America as a whole has experienced uncharacteristically good weather for the last 18 consecutive years, which, combined with improvements in agriculture, has resulted in near-record harvests.

In fact, Coxe says, you have to go back hundreds of years to find a period of such favorable weather for so long a time.

Actually, paleoclimatic data indicates that during the last 400 years, the U.S. has probably received some of the best weather North America has had to offer over the past 2,000. Even considering the Dust Bowl of the 1930s, which sent over 1 million people fleeing, the last 200 years have been exceptionally good in comparison to historical norms, according to a report titled “2,000 Years of Drought Variability in the Central United States,” by Connie A. Woodhouse and Jonathan T. Overpeck (1998).

Four hundred years ago was the time British colonization of North America got started in Jamestown (1607). And despite the general greening trend beginning at that time, historians know how close that colony came to starvation. And just over 200 years ago was when America gained control over a huge chunk of probably the choicest agricultural land in the world—the Louisiana Purchase.

But the Louisiana Purchase wasn’t always such a breadbasket. Several lines of evidence show that the last 400 years have been abnormally green. Tree rings, archaeological remains, historical documents, lake sediments, and geomorphic data from across the U.S combine to support Woodhouse and Overpeck’s findings that the droughts prior to 1600 “significantly exceeded the severity, length and spatial extent of 20th-century droughts.” And other droughts between the years a.d. 1 to 1200 also “occurred on a scale that has not been duplicated since Europeans came to the Great Plains.” The researchers concluded that judging from past occurrences, droughts more severe than the 1930s and 1950s are “likely to occur” again in the future.

How dry could it get?

Well, if you thought the 1930s were bad, consider the “mega-droughts” of the 1500s. Two massive droughts spanning a cumulative 43 years blanketed the U.S during this pre-British colonization century. For 25 consecutive years (1539 to 1564) a “very severe” drought dried lakes and baked clay into bricks. Then, just when the land was beginning to recover, the heavens again dried up and a second mega-drought scorched the Central U.S. for another 18 years (1587 to 1605).

These droughts were so severe that the report’s authors say they probably cleared vast areas of all vegetation. Extensive sand-dune fields emerged, and as regions were stripped of their topsoil, other areas were buried by wind-borne sediments (creating many of America’s super-fertile Aeolian soils being farmed today). As year after year of drought took its toll, levels in groundwater aquifers dropped, smaller rivers dried up, and evidence indicates that the massive Colorado River’s flow rates plummeted. Widespread crop failures led to starvation and ignited mass migrations.

Yet, as severe as these 16th-century droughts were, there may have been even worse droughts in the 13th century (at least in the California Mountains and the Great Plains regions). Evidence suggests, according to the above-mentioned report, that “many droughts prior to the late 13th-century drought were at least decades in duration.”

Decades of drought! What would America do if it was hit with a drought encompassing California and the Great Plains—America’s breadbasket—that lasted for multiple decades? The 1930s drought, as terrible as it was, was actually four distinct droughts, none of which was much longer than two years. In addition, some of those dry years were separated by one or more years of normal rainfall.

Could America even survive a drought spanning multiple decades? Society would face collapse, but not one that is unprecedented.

Thousands of tourists each year gaze with wonder upon the massive cliff cities in the Southwest United States. Yet, the people who built them are long gone. When the first European explorers discovered the deserted castles, they asked the Navajo who built the great towers of rock. Because the Navajo did not know, they referred to the vanished former inhabitants as the Anasazi, meaning “the ancient ones.”

The Anasazi Indians in New Mexico vanished with barely a whimper around a.d. 1200. Yet at their peak, the Anasazi were a complexly organized, extensive, regionally integrated society that erected the largest stone buildings in pre-Columbian North America. In fact, their five- and six-story towers stood unrivaled until the Chicago steel-framed behemoths of the 1880s.

At its height, Chaco Canyon, the seat of the Anasazi civilization, may have contained 15,000 permanent inhabitants. A 9-meter-wide road connected multiple outlying communities, which provided corn, squash and other crops to the approximate 1,200 inhabitants of the capital city of Pueblo Bonito. Pueblo Bonito’s 800 rooms, some of them multiple stories, can still be observed today. Chaco Canyon flourished until sometime between 1150 and 1200, when it mysteriously and rapidly collapsed.

From tree-ring dating, it is known that a period of great drought came upon the Chaco area around a.d. 1130. This is confirmed by preserved remains of human waste that indicate a deteriorating diet. Jared Diamond, author of the book Collapse, reports that the first evidence of cannibalism and intensifying warfare appear shortly after this time.

But overall, cannibalism and warfare didn’t become all that pervasive. For the most part, it is as if the Chacoans just swept up and left. According to Diamond, it was a widespread planned evacuation because most rooms at the Anasazi sites lack the pottery and other useful objects that people would be expected to take with them but would be left behind if the unfortunate occupants were killed by invaders.

After Chaco was abandoned, some Anasazi seem to have temporarily flourished until the late 1200s at Mesa Verde, located somewhat to the north in Arizona—until they too were hit with an even bigger drought. According to Woodhouse and Overpeck, this time period, often referred to as the “Great Drought” in the Southwest, was contiguous with 38 years of drought shown in Nebraska tree-ring samples (1276 to 1313). The drought’s effects actually spread all the way into Minnesota. Consequently, by the end of the 13th century, the whole Anasazi area of the Colorado Plateau was being abandoned. Mass migrations took place as populations left their homes in search of food and to avoid war.

The lesson for us is in how quick these societies collapsed. After reaching its peak, the most advanced civilization of the time in North America (Chaco Canyon) lasted only 10 years before it completely collapsed and disappeared.

A drought of the scope and duration that befell the Anasazi would have “book of Revelation”-type consequences. If prices are as high as they are today, in relatively good times, they will dwarf the imagination when America experiences its next mega-drought.

And the consequences will be global.

America is not just the “breadbasket” of the world, it is the “cornbasket,” “soybeanbasket,” “oilseedbasket,” and many other baskets as well. Drought spillover effects would quickly go global.

But how is it that the United States came into possession of so many agricultural blessings in the first place? And is it coincidence that at the same time America was just being settled, the climate turned the vast savannas and windswept deserts of the Midwest into an agricultural superstore? Does it seem probable that so few could be blessed with so much?

In his 1863 address advocating a national fast day, Abraham Lincoln pointed to why America has such vast wealth, and also why America could lose this wealth. Lincoln stated,

It is the duty of nations, as well as of men, to own their dependence upon the overruling power of God … and to recognize the sublime truth, announced in the Holy Scriptures and proven by all history, that those nations only are blessed whose God is the Lord. … We have been the recipients of the choicest bounties of heaven. We have been preserved, these many years, in peace and prosperity. We have grown in numbers, wealth and power as no other nation ever has grown; but we have forgotten God. We have forgotten the gracious hand which preserved us in peace, and multiplied and enriched and strengthened us; and we have vainly imagined, in the deceitfulness of our hearts, that all these blessings were produced by some superior wisdom and virtue of our own.

President Lincoln knew that America’s agricultural wealth was a gift from God. You too can learn about God’s great gift of wealth to America by requesting your free copy of The United States and Britain in Prophecy.

Abraham Lincoln knew these great material blessings had not been earned, but had been given to our people by the God of Abraham, Isaac, and of Israel.And we should face the facts today and know that we were given all this vast unprecedented material wealth because God promised it, unconditionally, to Abraham. And He promised it to Abraham because Abraham obeyed God, kept God’s laws and commandments.

America’s unprecedented agricultural wealth is a result of our patriarch Abraham’s obedience. The root cause of food shortages and skyrocketing prices is America’s failure to recognize that its wealth was given to it by God—which has led people to vainly disregard the laws outlined in the Bible. For this cause, the blessings are being removed today by supernatural intervention!

That is the one major factor that climatologists leave out of the picture. They tend to look to so-called natural phenomena as reasons for Earth’s current climatic variations. Yet God has already predetermined that great weather fluctuations will impact the U.S., Britain and other Anglo-Saxon nations due to their rebellion against the Most High! “And I will break the pride of your power; and I will make your heaven as iron, and your earth as brass” (Leviticus 26:9).

As Coxe indicated in 2008, over the past 18 years America fed the world. But if America were to ever have a drought, who would feed it?

History shows, the mega-droughts are on their way—and this time, it won’t be a casual 1930s-style walk in the park.