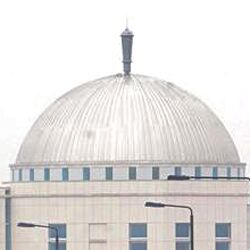 Why the president’s stance foreshadows a much larger clash.

For months, the right-wing blogosphere has been buzzing with outrage over the prospect of an Islamic cultural center being constructed just two blocks from Ground Zero in New York. Last week, while hosting a Ramadan sunset dinner at the White House, President Obama inserted himself into the middle of the controversy by offering his unequivocal support for the building project.

“Let me be clear,” Obama carefully noted, reading from a speech he prepared in advance. “As a citizen, and as president, I believe that Muslims have the same right to practice their religion as everyone else in this country. And that includes the right to build a place of worship and a community center on private property in Lower Manhattan, in accordance with local laws and ordinances. This is America. And our commitment to religious freedom must be unshakable” (emphasis mine throughout).

The next day, after igniting a firestorm of criticism, President Obama backtracked ever so slightly. He told reporters during a visit to the Gulf of Mexico that his Ramadan address was only meant to remind Americans of our ideals—that everyone be treated equally. “I was not commenting, and I will not comment, on the wisdom of making the decision to put a mosque there,” Obama said.

Yet polls have clearly shown that most Americans oppose the project, not because they see it as illegal, but because they view its location as being inappropriate and insensitive.

Even some Islamic moderates have expressed concern about the project. “Some Muslims will consider that building a mosque on this site immortalizes and commemorates what was done by the terrorists who committed their crime in the name of Islam,” Abdul Rahman Al-Rashid wrote in the Arab daily Asharq Al-Awsat.

Many have also raised legitimate concerns about the true intentions of the man behind the proposed Islamic center—Imam Faisal Abdul Rauf. Less than three weeks after 9/11, Rauf told 60 Minutes that the United States was an “accessory” to the attacks against New York and Washington, d.c. When asked how that could be, Rauf said it was because the U.S. had been responsible for the deaths of many innocent lives around the world.

“In fact,” Rauf said, “in the most direct sense, Osama bin Laden is made in the USA.”

Here is a man who blames America, in part, for 9/11, who won’t reveal the nations responsible for funding the $100 million mosque and who insists on building his mosque near Ground Zero, where the Muslim population happens to be around zero—and yet the president of the United States, after offering enthusiastic support for Rauf’s plan, only clarified his remarks by saying he would not comment on the wisdom of building a mosque so close to what many Americans deem to be hallowed ground.

What a contrast this line of thinking is compared to the intimidating pressure President Obama has applied on Israel to discourage Jewish construction in the West Bank and East Jerusalem, even though it’s entirely legal.

“It is time for these settlements to stop,” Obama said in his Cairo speech in June 2009. This, Secretary of State Hillary Clinton added forcefully, meant “a stop to settlements—not some settlements, not outposts, not natural-growth exceptions.” Israeli communities, in other words, should be prevented from growing naturally in territories that might someday become part of a Palestinian state.

Earlier this year, after Israel announced a plan for 1,600 housing units to be built in a Jewish neighborhood in East Jerusalem while Vice President Joe Biden was visiting Israel, President Obama upbraided Prime Minister Netanyahu for nearly 45 minutes over the phone. David Axelrod, Obama’s senior White House adviser, called the housing construction announcement “an affront” and “an insult” to the United States.

Netanyahu apologized profusely for the ill-timed announcement, but then defended Israel’s right to build in its sovereign territory. “No government of Israel for the last 40 years has agreed to place restrictions on building in Jerusalem,” Netanyahu said.

But the legal right for Israel to build has never stopped President Obama or his administration from commenting on the “wisdom” of various building projects.

As columnist Caroline Glick recently noted, “Obama is so firm in his belief that Jews should be denied civil rights in Israel’s capital and in the heartland of Jewish history that he has provoked multiple crises in his relations with Israel to advance this bigoted view. Almost from his first day in office Obama has struck out a radical position in which he has insisted that Jews must be prohibited from building anything—synagogues, homes, nurseries, schools—in Judea, Jerusalem and Samaria on land they own. Jews—Israeli and non-Israeli—should be barred from exercising their property rights even if their construction plans have already been approved ‘in accordance with local laws and ordinances.’”

Last week, according to Glick, Mahmoud Abbas described his Jew-free vision of a future Palestinian state: “I will not agree that there will be Jews among nato forces and I will not allow even one Israeli to live amongst us on the Palestinian soil.”

Yet these are the kinds of partners the United States assiduously courts, even as it tramples on the civil rights of Israeli citizens and utterly disregards the valid concerns of two thirds of Americans.

Of course, the White House and its surrogates in the media would have us believe the Ground Zero controversy is purely a matter of civil rights or religious tolerance. They would also insist that helping to build an anti-Semitic Palestinian state adjacent to Israel is an indispensable step to establishing lasting peace in the Middle East.

What these events actually reveal is a shameful and dangerous double standard that, as Glick pointed out, favors Muslim rights over the values of most Americans and turns a blind eye to Palestinian racism while denying Jews their civil rights.

The prophetic significance of these events is undeniably clear. As we have been proclaiming for many years, the Bible has prophesied of a latter-day division between the United States and Israel (see Hosea 5:13 and Zechariah 11:14). This is why the Jewish nation will soon turn to Germany and the European Union for help in countering the threat posed by radical Islam.

As for the United States, our regular readers know theTrumpet.com has often highlighted the many prophecies pertaining to America’s fall to the European beast power. Before that occurs, however, America’s strength will very likely be sapped by Islamic terrorists. In Leviticus 26, God says He will break the pride of our power (verse 19). In the end, it says in verse 37, “You shall have no power to stand before your enemies.”

This is why the clash that triggers World War iii is between the German-led European Union and Iranian-led Islamic extremism (Daniel 11:40-41). To learn more about these end-time prophecies, study our free booklet The King of the South.