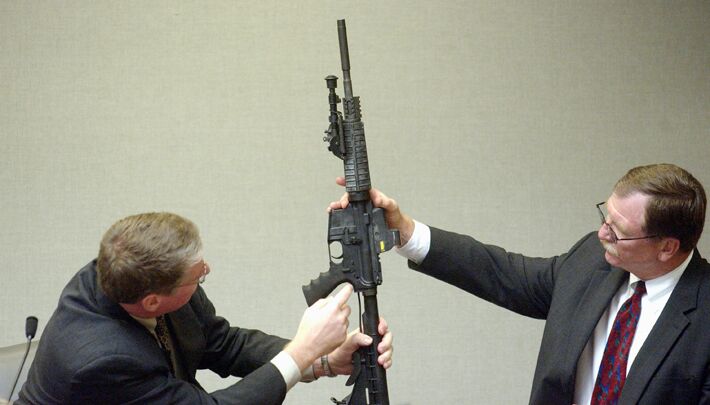 The Washington sniper is caught. But why is America becoming so violent?

From the December 2002 Trumpet Print Edition

America heaved a collective sigh of relief at the capture of the two Washington d.c. sniper suspects. With heavy hearts, the families of those who were the targets of the insanity tried to go on with their lives.

It was a fearful time. During the manhunt, one writer described his 6-year-old grandson as being afraid to leave the house. Leonard Pitts Jr. wrote, “He’s scared of being shot. Sign of the times. … He used to run out every morning to get the newspapers. Now he pauses at the front door, peers in every direction, darts to the tree in the middle of the yard, looks carefully around its trunk, then makes a dash for the end of the driveway” (Charleston Gazette, Oct. 19). Eric was assured by his grandfather that the sniper would not get him, although Pitts knew it was a “crazy promise” to make.

Now, October’s horror has begun to blend into the past. Joggers have gone back to their routine, sports teams are competing back at their usual locations, shoppers fill the malls (just in time for the holidays), and people can drive into filling stations without fearing for their lives. It looks like the terror is over—or is it?

Even as the shooting suspects were placed under lock and key, new reports of violence appeared: A student at the University of Arizona-Tucson school of nursing opened fire, killing three people before taking his own life. He was angry because he couldn’t take a midterm exam. An Oklahoma high school senior, after getting scolded for driving his pickup truck recklessly near children, broke into his father’s house, took a 20-gauge shotgun, and, as neighbors came to the door to talk to him, opened fire on them. He then went on a spree, shooting six more people. In New Jersey, someone walked into a high school, shot a student in the stomach and walked out. These shootings all occurred within a four-day period at the end of October.

The desperate truth is, the signs of the times are more and more violent! USAToday reported that crime percentages were up in 2001 for the first time in a decade: “Murder, rape and every other violent criminal act except aggravated assault rose last year, the fbi said Monday in reporting the first year-to-year increase in overall crime in a decade. … The 15,980 murders represented a 2.5 percent increase over 2000, while forcible rapes were up less than 1 percent and robberies rose 3.7 percent” (Oct. 28). Nationally, as well as internationally, violence is on the rise.

In His day, Jesus Christ rebuked the hypocritical Pharisees for not being able to read the signs of the times: “He answered and said unto them, When it is evening, ye say, It will be fair weather: for the sky is red. And in the morning, It will be foul weather to day: for the sky is red and lowring. O ye hypocrites, ye can discern the face of the sky; but can ye not discern the signs of the times?” (Matt. 16:2-3).

The signs of the times reveal increasing violence. Today, no grandfather can give a real guarantee that his grandson will not be attacked. Law enforcement cannot guarantee the safety of the community or the nation.

The Prophet Ezekiel warned of these days: “Make a chain: for the land is full of bloody crimes, and the city is full of violence” (Ezek. 7:23).

Why is our land so violent? Why is there terror in the land? That is the question we need to be asking. It is a mistake to accept this as normal.

God records this promise to all who respect Him and obey His commandments: “Thou shalt not be afraid for the terror by night; nor for the arrow [or bullet] that flieth by day …. A thousand shall fall at thy side, and ten thousand at thy right hand; but it shall not come nigh thee. … Because thou hast made the Lord, which is my refuge, even the most High, thy habitation; There shall no evil befall thee …” (Ps. 91:5-10).

Can it be that the people of this nation have not made God their habitation? Could there be any other reason?

We live in an age that increasingly stresses to our young people, Do your own thing, without a godly system of values or virtues. If this does not change, the signs portend that events will only get worse. God has this warning for us: “Wherefore I will bring the worst of the heathen, and they shall possess their houses: I will also make the pomp of the strong to cease; and their holy places shall be defiled. Destruction cometh; and they shall seek peace, and there shall be none” (Ezek. 7:24-25).

We are told that unless we turn to God in repentance, destruction comes! That is the sign we should be seeing. God is talking about national calamity of unbelievable proportions.

Humans cannot promise safety, but there is a way of protection. You, individually, can receive the protection you need. You need not fear “the terror by night, nor … the arrow that flieth by day.” God is the only guaranteed source of safety for you and your loved ones. For all who turn to Him, God has another promise: “I will say of the Lord, He is my refuge and my fortress: my God; in him will I trust. Surely he shall deliver thee from the snare of the fowler, and from the noisome pestilence. He shall cover thee with his feathers, and under his wings shalt thou trust: his truth shall be thy shield and buckler” (Ps. 91:2-4). If we turn to Him, we will not be victims of the times.