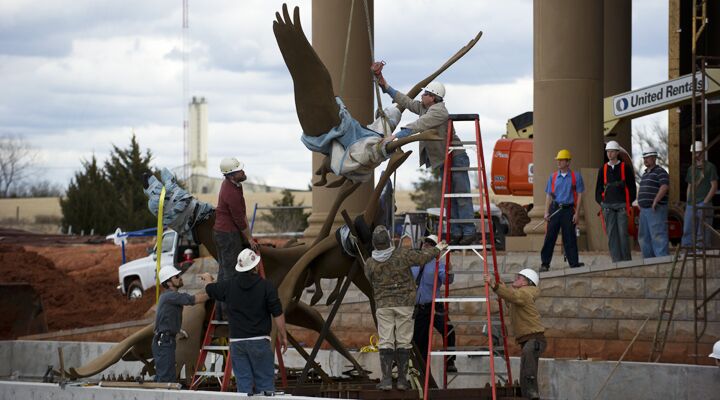 From the April 2010 Trumpet Print Edition

The sound of diesel motors, hydraulic pistons, power tools and voices brought the work site to life the morning of March 9, just before the day’s most important piece of equipment arrived: a 100-ton crane. The crane would make possible the auditorium’s interior and exterior centerpieces: three crystal chandeliers and Swans in Flight, a sculpture by Sir David Wynne.

As the crane began hoisting equipment to the roof of the auditorium, quickly became the center of attention of workers on the site and in the adjacent offices where the Trumpet is produced. By 10 a.m., the crew had set the hoist apparatus that will be used to secure three important parts of the Armstrong Auditorium lobby: two 10-foot side chandeliers and one 12-foot center chandelier. Then the crew repositioned the crane and began to secure lifting slings and straps to the birds.

Swans in Flight was commissioned by Herbert Armstrong—after whom Armstrong Auditorium is named—in the late 1960s. Renowned British sculptor David Wynne created the piece for the Ambassador College campus in Big Sandy, Texas. The iconic form depicts the five stages of a swan in flight. Wynne was knighted in 1994 by Queen Elizabeth II for his body of work, which includes Boy With Dolphin near the Tower Bridge in London and the royal seal on the gates of Hyde Park honoring the Queen Mother’s 90th birthday in 1992. Wynne’s work appears all over the world and includes numerous commissions by the royal family.

After Mr. Armstrong died, Ambassador College eventually failed, and the campus was sold. The campus’s new owner, the Institute in Basic Life Principles, subsequently announced that the Wynne sculpture was for sale.

Gerald Flurry, editor in chief of the Trumpet and pastor general of the Philadelphia Church of God, authorized the purchase of the sculpture in April 2009. The sculpture was disassembled at Big Sandy on August 11 and transported to a foundry in Norman, Oklahoma. After repairing the sculpture and applying a refinished patina, the foundry delivered the birds to the PCG campus in January 2010, where they awaited installation.

After the crane operator relocated four of the birds, the heaviest of which weighs approximately 1,600 pounds, the crane swung back to bring the final stage—the swan with its wings in an upstroke—into place at the top of the sculpture, about 12 feet off the ground.

As he waited for the foundry workers and his crew to unsling the bird, crane operator Rick Church commented about the sculpture. Church, who has worked cranes for 15 years throughout Oklahoma and Texas, said he looked forward to seeing the finished product, which will feature a 120-foot reflecting pool and water jets spraying toward the birds, simulating motion. “I’ve seen a lot of fountains,” he said over the growl of the crane’s idling diesel engine. “But you’ve got something real special here. This is rare.”

The swan sculpture will be unveiled by David Wynne at Armstrong Auditorium’s official grand opening ceremony this summer.