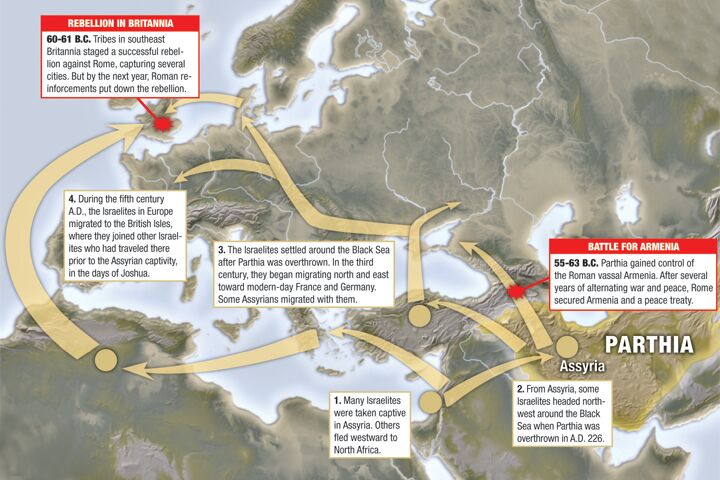 After Acts 11, little is mentioned about their whereabouts.

Most people misunderstand prophecy because they can’t identify the modern-day descendants of ancient Israel—the 10 tribes that revolted against King Rehoboam’s burdensome regime. As I explained in this column, when the 10 northern tribes seceded, they selected Jeroboam as their king, moved their capital from Jerusalem to Samaria and retained “Israel” as their namesake. The two southern tribes, headquartered in Jerusalem, became known as Judah.

During Shalmaneser’s three-year siege of Samaria in the eighth century b.c., the Assyrians uprooted the Israelites from their homeland and deported them as slaves into the land of Assyria, then located between the Euphrates River and the southern shores of the Caspian Sea (see 2 Kings 17:23-24).

After this event, many historians and scholars lose track of the Israelites. Some assume that the 10 tribes vanished from off the Earth!

But they didn’t disappear. They just lost their identity, as Jesus plainly confirmed a full eight centuries later. As a direct descendant of King David, of the tribe of Judah, Jesus had been born in a Jewish colony that was subordinate to the Roman Empire. “He came unto his own,” it says in John 1:11, “and his own received him not.”

The Jews rejected Jesus and so He turned to the Gentiles instead, some assume. But he didn’t! Notice what Jesus said to a Gentile woman in Matthew 15:24: “I was not sent except to the lost sheep of the house of Israel” (New King James Version; emphasis mine throughout).

What an illuminating scripture! In one simple verse, Jesus said His mission was to reach the house of Israel (not the house of Judah) and that Israel’s identity (obviously not Judah’s) had become lost.

How then—since Christ’s life was cut short soon after He made that statement—was that divine mission fulfilled? Read it yourself in Matthew 10:5-6. In that account, Jesus commanded His disciples not to preach the gospel in Gentile regions (Paul would take care of that—see Acts 18:6), but to go instead to the “lost sheep” of the house of Israel.

In Jesus’s stead, all the original apostles were sent to the lost sheep of Israel.

This is why, after Acts 11, you read very little about the original 12. Once they went to the lost sheep of Israel, history lost sight of them.

And that’s the way God wanted it! It wasn’t time for Israel’s identity to be revealed to the world.

Notice the way the Apostle James introduced his epistle: “James, a servant of God and of the Lord Jesus Christ, to the twelve tribes which are scattered abroad, greeting.” James didn’t even address the Gentiles. Nor is his letter exclusively directed at the house of Judah. His target audience was primarily the tribes of Israel that had been “scattered abroad” during their Assyrian captivity eight centuries earlier!

God could have easily inspired James to include more details about the whereabouts of the lost sheep. But He didn’t want their identity revealed yet. So the book of James ends without any closing salutations about the people he was writing to. It’s one of just three New Testament books (the others are Acts and 3 John) that abruptly finishes without so much as an “Amen”!

In looking at the content of James, however, there is one important clue that sheds light on the location of the lost sheep during the first century. It’s in James 4:1: “From whence come wars and fightings among you? come they not hence, even of your lusts that war in your members?” While this passage has a spiritual application that applies to God’s people today, in James’s day, he was speaking about literal wars that were raging in the areas where Israelites had been scattered.

James wrote his book around a.d. 60, about 10 years before the Roman Empire sacked Jerusalem. It was a relatively peaceful time in the world, with Rome towering above regional powers. At the time, Rome was engaged in just two major skirmishes—one in Britain and the other in Parthia, located around the southern shores of the Caspian Sea!

These were the wars going on “among” the Israelites James addressed. What a fascinating bit of evidence as to Israel’s whereabouts!

Parthia has an intriguing history. They suddenly appeared around the Caspian shores soon after the people of Israel had been exiled there as slaves in the eighth century b.c. According to historian George Rawlinson, the meaning of the name Parthia is “exile.”

In fact, these exiles who rose to power and prominence in the land of Parthia around 250 b.c. were none other than the “lost” tribes of Israel! They remained in the land of their captivity until the early part of the third century a.d., when the Persians drove them northwest into what is Europe today.

Josephus, the prominent first-century Jewish historian, was well aware of Israel’s settlement into the land of Parthia. In his history about the days of Ezra and the construction of the second temple, Josephus declared, “But then the entire body of the people of Israel [the lost sheep] remained in that country [they never returned to Samaria]; wherefore there are but two tribes in Asia and Europe subject to the Romans, while the 10 tribes are beyond Euphrates till now, and are an immense multitude, and not to be estimated by numbers.”

So much for disappearing! Evidently, the multitude of scattered Israelites was so immense that Jesus commanded Peter, James, John and the rest of His disciples to go to these “lost sheep.” If you have a collection of maps at the back of your Bible, look at the one that illustrates Paul’s territory. He was the apostle in charge of the Gentile region. His area basically covers northern Palestine and every region that touches the northern border of the Mediterranean Sea, including what is today southern Turkey, Greece and Italy. He also pastored congregations on the islands of Malta, Crete and Cyprus. And in Romans 15:24, Paul said he intended to visit Spain as well.

That is a huge territory! But not as large as the regions the “lost sheep” of Israel had been scattered into. For those territories, remember, had been reserved for the original 12. And there was very little territorial overlap, as Paul confirmed in Romans 15:20. Paul worked in his assigned territory—and the other apostles worked in theirs.

Now consider Peter’s assigned territory. One of his regions, judging by the opening remarks in his first epistle, was northern Turkey. “Peter, an apostle of Jesus Christ, to the strangers scattered throughout Pontus, Galatia, Cappadocia, Asia, and Bithynia.” Peter didn’t use the word “strangers” in the sense that they were Gentiles. It comes from a Greek word that means resident foreigner or alien.

Peter was fulfilling his Christ-given commission. He was addressing Israelite “strangers” who were dwelling in Gentile lands. And where? Throughout Pontus, Galatia, Cappadocia, Asia and Bithynia (see map included in this article). Whereas Paul was expressly forbidden to enter the northern half Turkey (Acts 16:6-7), Peter was commanded to reach the multitude of “lost sheep” that had been scattered in that area.

Just as there was an immense multitude of “lost sheep” to be reached beyond the Euphrates in the land of Parthia, so there was another multitude—one that Josephus was unaware of—that had migrated northwest of Samaria into the region of northern Turkey.

And these are the territories we can pinpoint after examining just two epistles, one of them written by one of the original 12 disciples.

Think about how far the others must have gone. And what about the other war that was raging in Britain at the time James wrote his epistle? Could it be that some of the apostles made it as far as the British Isles?

It all makes for a fascinating study that can’t possibly be concluded in one short column. That’s why The United States and Britain in Prophecy is an absolute must-read.

Now is the time that God has chosen to reveal Israel’s true identity!