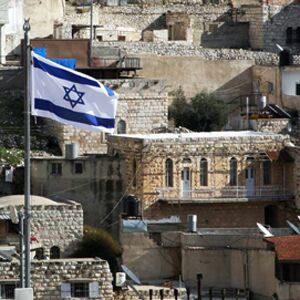 How Palestinian leaders made conflict in this East Jerusalem neighborhood inevitable

Tension is mounting in East Jerusalem—again. On Tuesday, Jerusalem’s Mayor Nir Barkat unveiled plans for the construction of an impressive new tourist park in the neighborhood of Silwan.

Should Barkat’s vision become reality, Silwan will eventually become a mecca for tourism and a cash cow for Silwan’s Jews and Arabs. Situated in an area of Silwan that officials are calling “king’s park” (after the biblical King David), the leafy development will consist of souvenir shops, artists’ workshops, restaurants and commercial facilities, as well as a world-class archeological museum. Construction would include overhauling infrastructure in some parts of Silwan and revamping large swathes of the dilapidated Kidron Valley. According to the official website of Jerusalem, “The Gihon Spring will once again flow along the Kidron Valley, the orchards will be replanted, and a blooming garden will be grown, which would be open to both visitors and the neighborhood residents” (March 2).

Thing is, the construction of beauty is often an ugly process. In Jerusalem this week, Palestinian leaders made it clear that if Mayor Barkat’s plan is implemented, things will get ugly. “Nir Barkat will bear the responsibility for the conflagration that will occur in the city if his plan is carried out,” Hatem Abdel Kader, a Fatah leader in Jerusalem, said. “[I]f this is what the Israelis want, we will not run away from this confrontation, and this is what they will get” (emphasis mine throughout).

After this week’s unveiling, many believe Jerusalem city officials will soon set about implementing the plan, which will include bulldozing at least 22 illegally constructed Palestinian homes—a move that would likely spark a major confrontation between Palestinians and Jews in East Jerusalem. With a potential conflict in East Jerusalem brewing, the question is, just who is responsible for the tension between Palestinians and Jews in Silwan?

For years Silwan has existed as a run-down, overbuilt, overcrowded Palestinian neighborhood with narrow, trash-filled alleys. Some parts have no running water or electricity. Many buildings are crumbling around their inhabitants. Lacking playgrounds or sports fields, Silwan’s children are confined to playing on dirty streets. Their parents are poor and often unemployed.

If we believe the mainstream media, Israel’s national government and Jerusalem city officials are primarily responsible for Silwan’s woeful state and the mounting tension in the neighborhood. Lost amid all this anti-Israel hoopla is the truth: The crisis brewing in Silwan was created intentionally by Palestinian leaders to undermine Israel’s stature in the international community and ultimately help forge Arab control of a neighborhood that is intrinsically Jewish in nature!

The issue of illegal construction by Arabs in Jerusalem has been well-documented, albeit under-reported. In 2005, camera noted that “[t]hrough natural growth, and immigration (both legal and illegal) from the West Bank, Jerusalem’s Arab population [grew] from 25.8 percent of the city in 1967, just after reunification, to more than 33 percent” at the end of 2003. Between 1967 and 2003, Jerusalem’s Arab population increased by 233 percent, while its Jewish population increased by just 129 percent. Today the Palestinians make up 35 percent of Jerusalem’s population.

One outgrowth of this population growth has been the rapid construction of Arab homes and facilities, both legally and illegally, in Jerusalem. In East Jerusalem in particular, Arab construction was fast and furious. Khalil Tufakji, a Palestinian demography expert, admitted as much in an interview with cnn in 1998: “We can build inside Jerusalem, legal, illegal—rebuild a house, whatever, we can do. Maybe we lose 10 houses, but in the end we build 40 more houses in East Jerusalem.”

“Since the establishment of the Palestinian Authority in 1994, the PA, Saudi Arabia and the EU have spent millions of dollars in financing illegal construction in Arab neighborhoods of Jerusalem, often on state and privately owned lands,” reported Caroline Glick in the Jerusalem Post (May 14, 2007). Evidence shows that Arab illegal construction in Jerusalem has been part of a long-running political and strategic agenda hatched in the minds of the Palestinian leadership. According to reports, Iran has donated up to $300 million for Arab construction in East Jerusalem. In 2005, an Arutz Sheva report revealed that Saudi Arabia had secretly been financing the “PA building campaign for political reasons in strategic areas in Jerusalem and other parts of Israel.”

For years, Palestinian leaders, in cahoots with Iran, Saudi Arabia and other Muslim states, have been devoting time, coordination and money into planning precisely where the Arab illegal homes and structures should be located. Why?

Glick answers: “In an effort to degrade the Jewish character of [Jerusalem]” (op. cit.).

By directing and financing illegal Arab construction, the PA, with assistance from Muslim states, actually made conflict with the Jewish government inevitable.

Illegal Arab construction has been endemic to Jerusalem for years, says Justus Reid Weiner, author of the 2003 book Illegal Construction in Jerusalem. “In the Arab sector … illegal construction often takes the form of entire multi-floor buildings with 4 to 25 living units, built with the financial assistance of the Palestinian Authority on land that is not owned by the builder.” Construction in one neighborhood reached “epidemic proportions,” Weiner noted, with one “Palestinian official boasting that they have built 6,000 homes without permits during the last four years, of which less than 200 were demolished by the city.”

Guess what neighborhood that was: Silwan!

But why would Palestinians and supportive Muslim states promote such illegal construction? Simple: To extinguish the presence of Jews in a suburb of Jerusalem that is fundamentally Jewish in character. The name Silwan is derived from Siloam, the water pool discovered in 2004 in the southern part of the City of David, referred to by Christ in John 9 when He instructed a blind man to wash in the “pool of Siloam.” The Gihon Spring, situated in Silwan in the Kidron Valley, is first referenced in Genesis 2, and was the primary water source for early Israelites settled in the City of David. In the 10th century b.c., David’s son Solomon was anointed king of Israel near the Gihon Spring. Silwan also includes Hezekiah’s tunnel, a 1,700-foot tunnel that tourists can walk through today, cut out of bedrock by the residents of the City of David to bring water inside the walls of Jerusalem in anticipation of an Assyrian siege (2 Chronicles 32).

Silwan also encompasses the City of David—the ancient site of the original city of Jerusalem, named after the legendary Jewish king responsible for transforming Jerusalem into the capital city of the ancient Israelites. The City of David, situated in the heart of Silwan, is the essence of Jewish character!

Stunning archeological evidence has surfaced in recent years revealing the Jews’ glorious past in the City of David. In 2005, archaeologist Eilat Mazar uncovered a small section of what she thought might be King David’s royal palace during an excavation there. During the winter of 2006/2007, Dr. Mazar’s speculation was confirmed when she uncovered a massive wall, 5 meters wide (indicating this was the home of someone prominent), on the eastern side of the royal complex.

In November 2007, in a speech at an archaeological conference at Bar Ilan University, Dr. Mazar told 500 attendees that she had discovered Nehemiah’s wall, dating back to the 5th and 6th centuries b.c. Then, in the autumn of 2008, Mazar announced the discovery of a tunnel dating back to the 10th century b.c., stating that the “tunnel’s characteristics, date and location testify with high probability that the water tunnel is the one called tsinnor in the story of the King David’s conquest of Jerusalem.”

Last week, Dr. Mazar made headlines again when she revealed that during a recent dig in the Ophel (which is situated in Silwan, between the City of David and the Temple Mount) she had discovered a section of a massive wall dating back to the 10th century b.c. Uncovered in the city wall complex—which was quite possibly constructed by King Solomon—were an inner gatehouse for access into the royal quarter of the city, a royal structure adjacent to the gatehouse, and a corner tower that overlooks a substantial section of the adjacent Kidron Valley.

Among the various flash points between Jews and Palestinians, reported United Press International last week, “it is the discovery of the ancient stone fortifications in Jerusalem by Israeli archeologist Eilat Mazar that is likely to cause the biggest storm in the unfolding conflict over both sides’ claims to historical legitimacy as possessors of the disputed land.” Is it coincidence that Silwan is emerging as the convergence point of the rising tension between Jews and Palestinians?

Not if you’re aware of the Arab strategy of illegally settling Palestinians in areas of terrific historic relevance to the Jews! Fact is, by condoning and even facilitating the settlement—much of it illegal—of nearly 40,000 Palestinians in Silwan, Arab leaders are largely responsible for making the coming clash between Jews and Palestinians in East Jerusalem inevitable.

Events currently unfolding on the ground in Jerusalem make it imperative that you learn more about the future of this city. To do so, read Jerusalem in Prophecy.