Only if you ignore what he did, Vatican says. 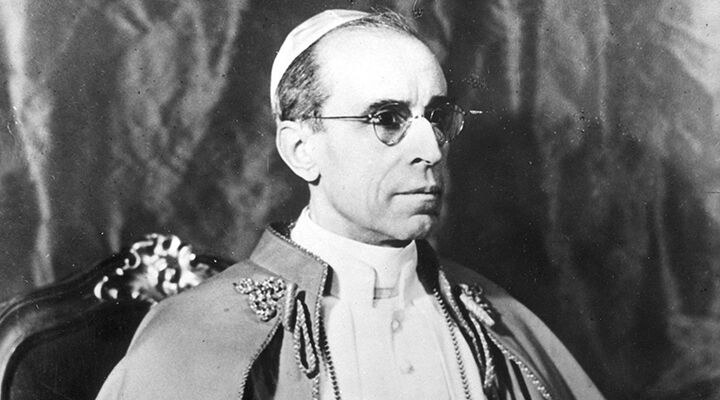 Only if you ignore what he did, Vatican says.

Hitler’s pope is one step closer to sainthood. In December 2009, Pope Benedict xvi issued a decree proclaiming the “heroic virtues” of the 20th century’s most controversial pope. Prior to World War ii, the cardinal who later became Pope Pius xii successfully negotiated the Reich Concordat with Adolf Hitler in 1933, which effectively removed all political opposition to the growing Nazi movement in Germany.

During the war, Pius turned a blind eye to Hitler’s barbarous campaign to exterminate Jews. In October 1943, Hitler’s SS troops entered Rome’s old ghetto and rounded up more than a thousand Italian Jews to be transported to death camps. Before their deportation, these Jews were held captive for two days in a building located less than half a mile from the Vatican. Pope Pius was one of the first to be made aware of the Jewish arrests. Yet he did nothing to prevent them from boarding cattle cars bound for Auschwitz.

Even after the war was over, Pius intervened personally to help Nazi criminals go “underground” in order to escape punishment.

Today, Pope Benedict has placed Pius on the fast track to sainthood. By issuing a decree on his virtues, Benedict moved him closer to beatification, which is the first major step toward sainthood. But this should not in any way be seen as a “hostile act” toward Jews, said Vatican spokesman Federico Lombardi a few days after the pope’s move.

The Jews, of course, disagree, especially since the decree was made several weeks before the pontiff visited Rome’s synagogue. Jewish organizations and historians have led an effort over recent years to stop the beatification process—to no avail. Benedict’s decision to recognize Pius’s “heroic virtues” sparked an outcry from Jewish groups, some of whom pointed out that the Vatican still has not opened up to the public its archives from the time of Pius’s pontificate. “I can’t understand the rush [to beatify Pius],” said Abraham Foxman, a Holocaust survivor and the Anti-Defamation League’s national director, “especially while there are still survivors who are alive who feel the issue very, very deeply and are being told the files need time to be processed. What’s the imperative?”

Incredibly, the Vatican doesn’t see how the historical record matters much when it comes to Pius’s qualifications for sainthood. Lombardi believes Pius should be evaluated by his Christian life and “his intense relationship with God and continuous search for evangelical perfection”—not “the historical impact of all his operative decisions” (Vatican Information Service, Dec. 23, 2009).

The Vatican, Lombardi seems to be arguing, is quite all right with whitewashing the dubious acts of its most celebrated popes. He offered this quote from Pope John Paul ii as further support for Pius: “[T]he church does not celebrate the specific historical decisions he may have made, but rather points to him as someone to be imitated and venerated because of his virtues, in praise of the divine grace which shines resplendently in them.”

Never mind what he actually did—just know that he was virtuous.

Can you imagine Jesus Christ ever reasoning in that manner? Your religion, Jesus taught, is what you do! “And why call ye me, Lord, Lord, and do not the things which I say?” (Luke 6:46).

While in Athens, the Apostle Paul scolded the educated elites of his day for their rampant idolatry, saying that in Christ “we live, and move, and have our being” (Acts 17:28).

Yes, indeed. Think on these heroic virtues. But that’s not all. True religion can’t stop there. Verse 9 completes the thought: “Those things, which ye have both learned, and received, and heard, and seen in me, do.”

Think on them—and do them! That’s the hallmark of a true Christian.

Pope Pius xii’s virtues, or lack thereof, can hardly be determined by words alone—not if we take the Bible at its word.

If there be any virtue, what did he do?