The U.S. takes on yet another impossible task. 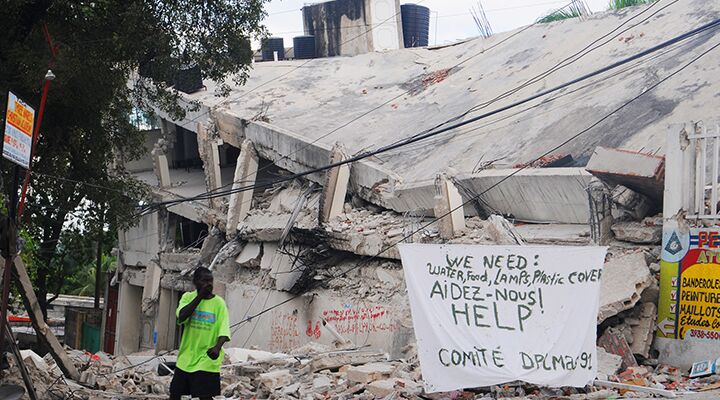 The U.S. takes on yet another impossible task.

In January, America added a long-term nation-building mission to the top of its ever expanding “fix it” list. Haiti, the Caribbean nation that was leveled in a catastrophic earthquake on January 12, is now a ward of the United States.

This comes in the midst of a near-total collapse of America’s economy that began in October of 2008. It comes at a time when deficit spending and federal debt have skyrocketed to levels not seen since World War ii. It comes during a painful recession where 17.3 percent of the American workforce is either unemployed or underemployed. And it comes as America’s military might is stretched paper-thin across Iraq and Afghanistan.

Now the U.S. is taking on the impossible task of fixing a nation that was, by all accounts, broken long before the devastation it suffered on January 12.

During two centuries of “independence,” there have been at least 34 coups d’état in Haiti. This nation’s litany of despotic governments has been rife with incompetence, cronyism, corruption, gangs, drug trafficking and violence. As recently as 2006, according to the Corruption Perception Index, Haiti’s governmental effectiveness and stability ranked dead last in the world.

It’s one of the worst governments this world has ever produced. And Haitians have endured generations of misery and suffering because of it. Haiti is the poorest country in the Western Hemisphere. Most of its 9 million people survive on less than $2 per day. Only 10 percent of Haitians have electrical service. Fifty-four percent live in abject poverty, many of them without access to potable water or sanitary facilities.

Life expectancy is low, infant mortality is high and disease is widespread. Only sub-Saharan Africa has a higher rate of aids cases.

This was Haiti before the earthquake. Now add tens of thousands of rotting corpses, 3,000 prisoners on the loose, pillaging and looting what’s left of Port-au-Prince, and an obsolete government that disappeared overnight.

This is the next big project for the United States of America.

As with many unnatural disasters, the magnitude of the devastation in Haiti wasn’t fully known until after the dust began to settle. When the massive scale of the tragedy began to emerge the morning after, President Obama directed his administration to put together an “aggressive effort” to save lives. He mobilized forces needed to assess the overall damage.

At a meeting with his national security team on Thursday, January 14, the president made it clear that Haiti must be given “top priority.” The United States, he said, had coordinated relief and rescue operations with an international coalition, including the government of Haiti, the United Nations and countries across the Americas and beyond. He told Americans to view his $100 million pledge to help relief efforts as an investment.

On Friday, President Obama told Haitian President Préval that America was committed to the Haitian people. That same day, the aircraft carrier uss Carl Vinson anchored off the coast of Haiti.

The next day, on January 16, President Obama met with former presidents Bill Clinton and George W. Bush to lock down his new mission statement for the United States. At the Rose Garden, just after their meeting, President Obama announced, “At this moment, we’re moving forward with one of the largest relief efforts in our history—to save lives and to deliver relief that averts an even larger catastrophe. The two leaders with me today will ensure that this is matched by a historic effort that extends beyond our government, because America has no greater resource than the strength and the compassion of the American people” (emphasis mine throughout).

This will be a long-term effort, he said later, that will not be measured in days or weeks, but in months—“even years.”

President Clinton, since the days of his honeymoon with Hillary in Port-au-Prince 34 years ago, has always been fascinated by Haitian culture and has championed democracy for the island nation. He sees this extraordinary catastrophe not as a drain on American resources or a financial albatross, but as a tremendous opportunity.

Haiti, President Clinton said on January 16, is “one of the most remarkable, unique places I have ever been. And they can escape their history and build a better future if we do our part.”

Hillary Clinton’s entourage landed in Haiti the same day her husband made that head-spinning statement. She became the first White House cabinet member to arrive at the catastrophic scene.

The United States “will be here today, tomorrow and for the time ahead,” she told the people of Haiti, before touring the capital to get a firsthand look at the damage.

The next day, the Sunday Times filed this report: “The American secretary of state, Hillary Clinton, flew into Haiti yesterday [January 16] to spearhead a huge aid operation that the U.S. administration hopes will serve as a symbol of America’s humanitarian spirit and an example of the prowess of its armed forces. …

“Hillary Clinton’s visit to tour the devastated capital came as President Barack Obama committed himself to throwing the full might of America’s military machine into relief efforts—sending in ships, helicopters and up to 10,000 troops, as well as $100 million (£61 million) in aid to help the victims. …

“This is the first big humanitarian disaster since Obama took office a year ago and he is clearly anxious to avoid the mistakes of Bush, much criticized for his bungled response to Hurricane Katrina in New Orleans” (January 17).

President Obama called the Haiti operation “one of the largest relief efforts in our history.” He explained, “I will not put up with any excuses for us not doing the very best in this time of tragedy.”

Read it again and grasp the significance of what is happening here. On January 16, it had become undeniably clear: The monumental task of rebuilding a destroyed nation had landed squarely on the shoulders of a superpower in the midst of rapid decline.

“Haiti had barely functioning ministries even before the earthquake,” one expert on Haiti told Reuters. “The Obama administration can describe this as a partnership, but it is one where one partner is doing all the work and has all the authority” (January 17). The Washington Post said Haiti’s government was so overwhelmed by the foreign aid that overnight it became “largely invisible.”

And yet, as Reuters pointed out, America had little choice but to become Haiti’s de facto government. The U.S. “must either step up to the task of relief rebuilding,” it wrote, “or open itself to criticism and … a possible new flood of Haitian refugees.”

The United States is now responsible for fixing what has been broken in Haiti for over two centuries. And like so many other nation-building enterprises the U.S. has embarked upon over the last half century, it will not turn out well in the end.

Nineteen years after the start of the Gulf War, on the very same day (for more on the significance of January 16, see “America’s Next Iraq,” page 4), U.S. Secretary of State Clinton landed in Haiti to “spearhead” one of the largest relief and rebuilding efforts in American history. Barely one week into the mission President Obama said will take “years,” there were already 11,500 U.S. troops on the ground in Haiti, a little nation with a population the size of the Chicago metropolitan area.

These 4,000 marines had been scheduled to leave for Afghanistan that very week! But instead of fighting against terrorists that are currently making great gains in Kabul, they were re-routed to one of the largest relief and rebuilding efforts in the history of the United States. This, according to the Christian Science Monitor, “presents the Pentagon with a delicate balancing act, since the already-overstretched U.S. military can ill afford to get mired in a security-and-stabilization mission” (January 20).

Too late. It’s already mired in Operation Haiti—will be for years. No matter the cost, Haiti is now “top priority.”

President Obama concluded his January 14 remarks at the White House by making a personal appeal to the people of Haiti. “Few in the world have endured the hardships that you have known,” he said. “Long before this tragedy, daily life itself was often a bitter struggle. And after suffering so much for so long, to face this new horror must cause some to look up and ask, ‘Have we somehow been forsaken?’

“To the people of Haiti, we say clearly, and with conviction, you will not be forsaken; you will not be forgotten. In this, your hour of greatest need, America stands with you. The world stands with you. We know that you are a strong and resilient people. You have endured a history of slavery and struggle, of natural disaster and recovery. And through it all, your spirit has been unbroken and your faith has been unwavering. So today, you must know that help is arriving—much, much more help is on the way.”

That Haiti’s leaders have already squandered billions of dollars in aid no longer matters. That Colombia uses Haiti as a convenient back door to sneak drugs into America is of little concern. That more than half of Haitians practice voodoo—irrelevant.

In addition: That the United States is bankrupt and cannot afford the war against terrorism, let alone one of the largest humanitarian missions in its history, is altogether unimportant. That we can’t even solve our own problems of corruption, greed, incompetence and cronyism, or our obsessions with celebrity and pornography, or eliminate our many addictions and diseases—none of this matters.

Haiti, the deluded thinking of our leadership goes, is an opportunity for American righteousness to shine forth!

You may think God has forsaken you, but America will not? Who do we think we are?

Haiti is under a curse, one popular American preacher maintains, but America somehow is not? How self-righteous!

No wonder God says He’s coming against us with fiery wrath to correct a hypocritical nation! (Isaiah 10:5-6). God, it says in Ezekiel 5:8, is against us!

That’s how we know this won’t turn out well for the United States in the end. Far from being an opportunity or a blessing, Haiti is yet another heavy millstone that now hangs around the neck of a once-mighty superpower that is frantically kicking and flailing to stay afloat.

From The March 2010 Philadelphia Trumpet
View Issue FREE Subscription
Next