Its beauty lies in its simplicity. 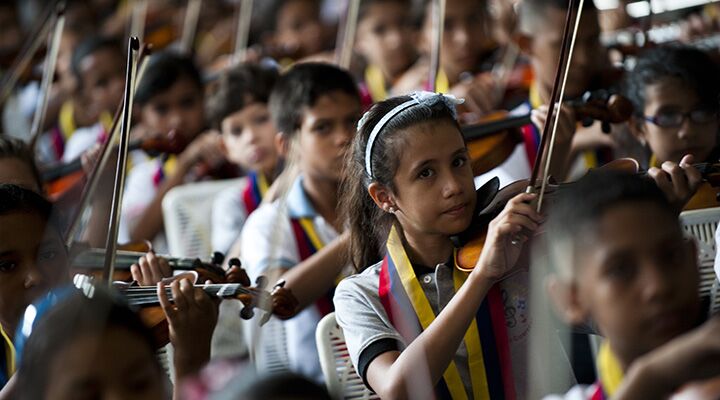 Its beauty lies in its simplicity.

The other day, my daughter told me Venezuela was producing some of the best young classical musicians in the world. “Venezuela?” I said. “Are you sure you don’t mean another nation—perhaps somewhere in Europe?”

“I don’t think so,” she replied. “I’m pretty sure it’s Venezuela.” She and her violin teacher had recently viewed a 12-minute video about a music program so extraordinary that some maestros are hailing it as “the future of classical music.”

In fact, it is in Venezuela. It’s called El Sistema in Spanish, meaning “The System.” It started 35 years ago with 11 students and an amateur musician who believed classical music was an effective antidote to the societal ills of family breakdown, crime and poverty. “I had a feeling this was the beginning of something very big,” remembers José Antonio Abreu, El Sistema’s creator.

Today, some 300,000 Venezuelan children—most of them coming from impoverished neighborhoods—are enrolled in one of The System’s several hundred orchestras, ensembles and choirs. Enrollment is expected to exceed more than a million within the next two years.

Outside Venezuela, numerous international organizations in more than 25 countries have developed music programs based on Abreu’s model. In Harmony, for example, is the British version of El Sistema. Cellist Julian Lloyd-Webber spearheads the fledgling program in England. After just one year of implementation in poor British communities, educators have noticed remarkable changes. “Teachers are reporting hugely increased levels of concentration, discipline, motivation and attendance,” Lloyd-Webber wrote for the Telegraph (Dec. 22, 2009). In Venezuela, where the program has a much longer track record, there have been noticeable declines in crime and drug use wherever The System is in place.

What is the secret to El Sistema’s success?

One thing that stands out is how much discipline and hard work it adds to the child’s education. “Every day after school throughout Venezuela, you can see kids practicing,” reporter Bob Simon said in the 60 Minutes piece my daughter shared with me. “Fifteen thousand trained musicians work with them. But The System also uses gifted kids to teach other kids. On top of eight hours of schoolwork, it makes for a long day.”

It amounts to about 11 hours of schoolwork and music training every day, six days a week. It’s a grueling pace for any youngster to maintain, but consider the alternative: hopelessness, disorder, delinquency and violence in the slum.

Parental involvement also plays a significant role. Teachers make house calls to inform parents about what the program expects of its students. The government provides a small stipend for families of El Sistema students, which helps encourage families to stick with it. But more than anything, it is the results that encourage parental support. When families saw how The System helped keep their children off the streets, Abreu says, “they became our most important allies.”

Children need discipline and structure in their education. They need support from involved parents at home. And, Abreu believes, they need music. Not the noise that masquerades as music in popular culture. Real music—music that feeds the mind, uplifts the human spirit, builds confidence and inspires achievement.

Popular music won’t work, one El Sistema teacher told 60 Minutes. Children can get that anywhere, even at home in the slum. But “when they sit in one of these chairs in the orchestra, they think they’re in another country, in another planet, and they start changing” (emphasis mine throughout).

“My struggle is for a society in which art is something more than just an aesthetic dimension of life,” Abreu explained to the Globe and Mail last year. “It is a primary instrument for the development of the individual and of the people.”

Using beautiful music as an instrument to educate and train young people for a brighter tomorrow. It’s a model that is as beautiful as it is simple.

We use it at Herbert W. Armstrong College and Imperial Academy. Our “José Antonio Abreu” was Herbert W. Armstrong, an amateur musician with a maestro-like genius for using God-inspired music to disseminate God’s truth while educating the young. “Music is another study we want to teach at Ambassador,” Mr. Armstrong wrote several months before he opened the college in 1947—“for music has an important place in evangelistic work.”

It was a system rooted in the foundation of God’s Word. Wholesome and uplifting music has always played an instrumental role in the work of God’s ministry and the education of our young. Colossians 3:16 tells us to teach using psalms, hymns and spiritual songs. 1 Chronicles 25:1 even describes the role musical instruments have in prophesying! And did you know that in ancient Israel, there were a number of priests whose sole responsibility was to make music to honor and praise God? (See 1 Chronicles 9:33.)

God is the author of beautiful music. He’s always intended for it to be used as an instrument to bring human beings into His Family!

That’s why Abreu’s story is so inspiring. True, it’s not God’s system. But it does reveal how much one visionary can improve the quality of life for many people by using a simple, family-oriented system of education that revolves around fine music.

Think of the wonderful abundance, the beautiful peace and prosperity that will soon spread over all the Earth once God’s government is established in Jerusalem and His system of reeducating the world is finally in place. Will music play an instrumental role? You know it will!

As prophesied in hundreds of Bible passages, the dawn of that beautiful new civilization—fittingly signaled by a thunderous blast from a musical instrument—is almost here.