Germany is conquering Europe without firing a shot. 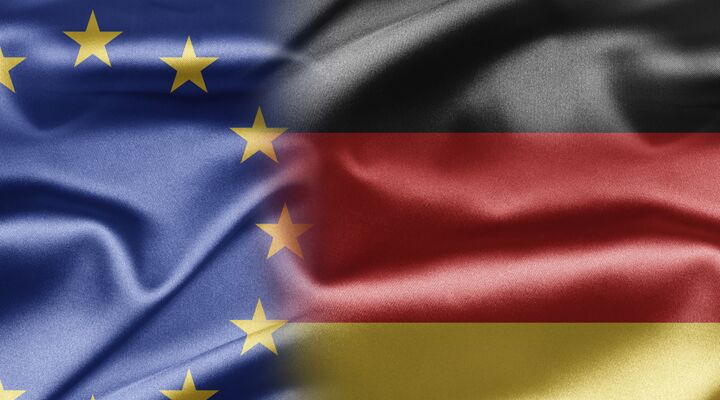 Germany is conquering Europe without firing a shot.

Nov. 9, 1989, was a momentous day. It was the day the Berlin Wall came crashing down. The Soviet empire began to retreat from Europe, releasing the Continent from the clutch of communism.

Nineteen years later, another—possibly even greater—event shook the world, one that had a similar emboldening effect on Europe. The sudden collapse of America’s banking system in September 2008 opened the way for the emergence of a European economic superpower—and for the nation hijacking it.

“The week surrounding September 11 of this year will prove to be a more significant turning point than the one that occurred seven years before,” we wrote in our November-December 2008 issue. “It was a stark, blaring announcement to the world that the American economic system has passed the point of no return. And when America’s economy goes, the world as we know it will be radically transformed.”

Nowhere is the transformation more pronounced than in Europe. The global economic crisis is sweeping away national powers and forcing an unnatural union of European states. It is hastening the rise of a new global superpower!

Politicians, business leaders and military planners alike are about to be stunned by Europe’s sudden rise to prominence. The international balance of power is already shifting. New alliances are taking shape. Economic systems are being challenged.

Yet the events shaking the world today were forecast many years ago.

Back in 1984, Herbert W. Armstrong, editor in chief of the globally circulated Plain Truth newsmagazine (the precursor to the Trumpet magazine), warned that a massive banking crisis in America could “suddenly result in triggering European nations to unite as a new world power larger than either the Soviet Union or the U.S.” (member and co-worker letter, July 22, 1984).

During a message given that same year, Mr. Armstrong related: “[I]n London, the economic conference was on while we were there. … And I can tell you now that I learned things while in London that have alarmed me very greatly. And I can see now the event that is going to trigger the formation of the reunification in Europe …. I believe that some event is going to happen suddenly, just like out of a blue sky, that is going to shock the whole world, and is going to cause the nations in Europe to realize they must unite! … Well, now I think I can see what may be the very event that is going to trigger it, and that is the economic situation in the world” (July 7, 1984; emphasis mine throughout).

No one can argue that the world isn’t locked in a global economic crisis that originated in America. But now witness how fast the prophesied united European superpower is rising.

The disparate leaders of Europe most often can’t agree on anything—but they are united in one strange, ominous way: They blame the United States for wrecking the global economy.

German Finance Minister Peer Steinbrück summed up European sentiment in October last year: “The origin and the center of gravity of the problem is clearly in the U.S.” German Chancellor Angela Merkel and French President Nicolas Sarkozy agreed. It is America’s fault, and now the world has to deal with it. More recently, in his encyclical released in July, Pope Benedict xvijoined the chorus, calling for anewworld financial order independent of the U.S.

But it is the Franco-German solution to Anglo-Saxon recklessness that is so ominous. During the G-20 economic summit last November, the world’s most powerful economies quietly signed over their sovereign rights to regulate their own economies. A new overarching international body charged with preventing future economic accidents, the Financial Stability Board (fsb), will now trump the national law of individual signatories (article, page 2). Virtually overnight, the new head of the fsb, Mario Draghi, has become the most powerful regulator of banking, finance and commerce in the world. Mr. Draghi, a former Italian banker, is also known for his close ties to the Vatican.

The motive behind the creation of the fsb may be far more sinister than just to make sure banking crises do not occur again. In the past, Paris and Berlin, supported by Italy, Spain and most of the older EU nations, have repeatedly attacked the U.S.-British free-market economic system. The worry now is that Germany and France are using their newfound strength to loot it.

According to independent news agency EurActiv, a “new balance of power” is being worked out in Europe. “France and Germany are openly challenging the rule of the City of London as Europe’s main financial hub, and are keen to see Paris or Frankfurt as powerful financial centers in a new, more regulated global system” (July 31). It is proposed that the derivatives industry, which has been a huge source of growth for London’s financial institutions, be regulated by new “clearing houses” based elsewhere. Additionally, new financial regulations will remove the advantage of registering as a UK-based hedge fund. Large financial institutions may be forced to flee London to escape scrutiny.

And the fsb’s authority will stretch far beyond the G-20 nations. Any bank that wants to conduct business with a G-20 member will have to comply with fsb guidelines.

Meanwhile, the EU is also creating other new regulatory bodies with vast power over EU nations: a European Banking Authority in London; a European Insurance Authority in Frankfurt; and a European Securities Authority in Paris. All three of these agencies will report to Brussels.

Some officials in Britain are warning that all the new regulations are thinly veiled attacks on its financial industry. But London has little power and few allies in the aftermath of the financial crisis.

The big losers in the financial crisis are easy to identify. But one winner has flown under the radar.

A year after the initial crisis, Western Europe remains in economic malaise, but Eastern Europe—including the Balkan states, Bulgaria, the Czech Republic, Estonia, Hungary, Latvia, Lithuania, Poland and Romania—stands on the edge of the abyss. It is these eastern countries that, according to Stratfor, have “borne the brunt of the global financial crisis.” They are the new “ground zero” of the global recession.

These Eastern European nations are burdened by vast debts that have become impossible to finance. Making the matter worse, much of this debt is denominated in foreign currencies. This means these nations are caught in an economic Catch-22. They need strong currencies to pay back the loans, but with their economies in turmoil, the only way they can earn money is to devalue their currency to increase exports. As a way out, they have looked to buy time by borrowing even more money.

France and Germany initially came to the rescue. “Sweeping bank bailouts unite Europe,” was the Los Angeles Times headline on Oct. 14, 2008. “Like soldiers falling into step, governments across Europe” followed France and Germany’s lead to bail out the banking system. “The time of going it alone is fortunately over,” declared President Nicolas Sarkozy. “United Europe has pledged more than the U.S.”

Despite the confident rhetoric and the magnitude of the bailouts, Eastern European countries still wobbled on the edge of disaster. Analysts feared a second round of crisis loomed. This was especially bad news for Sweden, Austria and Greece. Over the previous decade, Sweden lent very heavily to businesses in Estonia, Latvia and Lithuania. Now those loans were threatened, and Swedish banks themselves faced default—imperiling Sweden itself. Similar precarious situations existed for the big banking houses in Austria and Greece that invested in the Balkans and East-Central Europe.

But another rescue was being put together. According to Stratfor, the only long-term solution for these Eastern European countries and their banks “is a mad dash to the eurozone” (ibid.). The Eastern Europeans know this, and consequently they looked to the European Central Bank (ecb) as a savior.

The European Central Bank is dominated by Germany.

On June 24, the ecb opened up an “unlimited” supply of 1 percent one-year loans to European banks as a means of keeping them afloat. Eastern Europe breathed a collective sigh of relief and quickly borrowed over $620 billion. Germany became the white knight of Europe.

But on some levels, the relief might be short-lived. Additional bailouts may be needed if the economic downturn is more prolonged than expected. Additionally, Eastern European states (as well as Sweden, Austria, Greece and other countries) are now incredibly indebted to the German-run European Central Bank, regardless of whether or not their economies recover. Plus, the rescue loans come due in only a year. How will that money be paid back? Much of Europe is about to find out it is utterly dependent on Germany for its livelihood.

And here is the great irony in it all. The ecb, like its counterpart in America, the Federal Reserve Bank, creates money by fiat. The money it has lent out to Eastern Europe is just electronic bookkeeping entries—there are no tangible assets behind it. No gold or silver was collected and sent out. What this means is that the nations of Eastern Europe, by accepting both the ecb loans and regulations, have sold their sovereignty for literally nothing—not even bits of paper.

It is the coup of the century. The biggest heist of all time! Germany is stealing Europe. History books will show that Germany conquered Europe without firing a shot.

How Could He Have Known?

Go back and reread the forecasts made by Mr. Armstrong about the unification of Europe, the rise of a European superpower, and the event that would set it all in motion. Remember: Mr. Armstrong made those statements when the Soviet empire completely dominated Eastern Europe and Germany was still disunited. The European Union didn’t even exist until almost a decade later, and it would be 14 years before the European Central Bank would be created. Yet Mr. Armstrong clearly forecast the future of Europe. How could he have known?

Readers familiar with the Trumpet know that we have been proclaiming Mr. Armstrong’s Bible-based warnings concerning Europe and the world. And that is where the hope is. God warned America and this world that these events were coming. He foreordained that they would happen, and He recorded them in the Bible for us today so that we might be prepared.

God also recorded the ultimate conclusion of these events for us. The Bible reveals the future. As Mr. Armstrong said in 1984, the Bible predicts that European unification “in turn, could bring on the Great Tribulation [a prophesied period of warfare in the end of the age] suddenly. And that will lead quickly into the Second Coming of Christ …” (July 22, 1984).

That’s where America’s economic collapse and Europe’s unification under German leadership is leading: to the return of Christ.