For decades, Herbert W. Armstrong said it would happen. Today, Russia and China are strong allies. 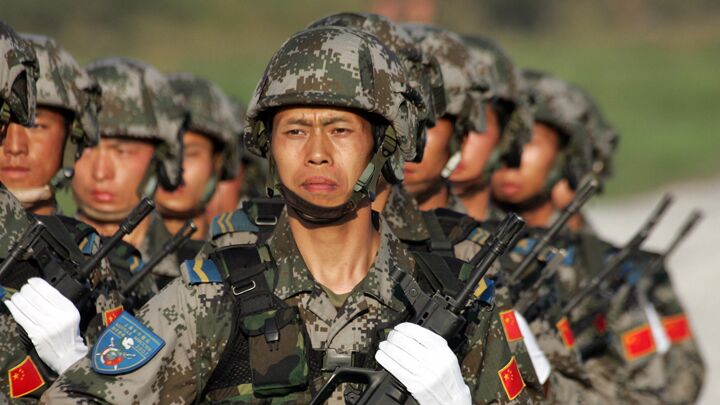 For decades, Herbert W. Armstrong said it would happen. Today, Russia and China are strong allies.

Russia and China are now better prepared to fight together than Britain and America were before World War ii.

For decades, Herbert W. Armstrong predicted an alliance between Russia and China. “Scripture prophesies two great military powers to arise in the last days—one the revival of the Roman Empire by a federation of 10 nations in the territory of the ancient Roman Empire; the other … Russia, with her allies … possibly China or Japan,” he wrote in the Plain Truth as far back as 1934.

He kept proclaiming this message as the Communist Party took over China. He held to this forecast even as Russia and China broke off relations in 1964, and Chinese posters publicly called for the people of the world “to overthrow Soviet revisionism.“

Since Mr. Armstrong died in 1986, much has changed. The ussr has fallen and been replaced by Vladimir Putin’s Russia. China has risen to become an economic and even military powerhouse. Yet Mr. Armstrong’s prophecies continue to prove correct. Russia and China are now close allies.

Russia and China held their first set of war games in 2005. These were labeled “anti-terrorist” exercises, but in reality they were far more—involving over 10,000 troops, warships and airplanes. They simulated landing attacks against hostile shores and even featured large-scale paratroop drops. Experts believe they may have been a trial run for a joint Russia-China invasion of Taiwan, or for supporting a Central Asian government against an American-backed insurgency.

Another major Russian-Chinese “anti-terrorist” exercise, called “Peace Mission 2009,” is scheduled for this summer. The war games, primarily intended to benefit the command staff, will involve around 2,000 men, as well as tanks, artillery and other heavy ground equipment.

In April, Russia and China announced yet more military exercises as part of a new era of military cooperation in their growing “strategic partnership.” During a meeting with his Chinese counterpart, Russian Defense Minister Anatoly Serdyukov announced that Russia and China would hold up to 25 joint maneuvers in 2009. “This points to a high level of cooperation between the defense ministries of the two countries,” he said.

These types of war games show a phenomenal level of cooperation. Many analysts have dismissed them as being inconsequential, especially as compared with the military integration within nato, for example, or the old Soviet-led Warsaw Pact. However, as United Press International analyst Martin Sieff pointed out, the nato model of a permanent alliance is historically very unusual. “Before World War ii and until U.S. entry into the war in December 1941, Britain and the United States held no exercises comparable to the scope and complexity of the 21st-century series of Russian-Chinese summer maneuvers,” he wrote (March 26).

“Special Relations in All Fields”

In 2001, Moscow and Beijing signed a “Treaty of Good-Neighborliness and Friendly Cooperation.” Article Nine of this treaty states, “When a situation arises in which one of the contracting parties deems that peace is being threatened and undermined or its security interests are involved or when it is confronted with the threat of aggression, the contracting parties shall immediately hold contacts and consultations in order to eliminate such threats.”

If one of these nations is attacked, the other is bound to defend it. This is a military alliance. The two nations are training to fight together and have already signed a treaty pledging to defend each other.

Since the treaty was signed in 2001, the two countries have only grown closer. This year is the 60th anniversary of the establishment of diplomatic relations between Russia and China, and statesmen from both countries want to use this milestone to become closer still—especially in military cooperation.

Last December, Chinese President Hu Jintao praised the nations’ military alliance during talks with Russia’s visiting defense minister. “As the strategic partnership between China and Russia develops, the relationship between the two militaries has also continued to become more consolidated and stronger,” he said. “I hope … to advance the China-Russian strategic partnership and the relationship between the two militaries from a new historical starting point to better and faster development toward the future.”

In April, in a meeting with China’s defense minister, Russian President Dmitry Medvedev said that Russia maintains “special relations in all fields” with China.

His foreign minister, Sergei Lavrov, went into more detail following talks with China’s foreign minister. “Russia and China have a common vision of the contemporary world and of its development trends; a common vision of ways to tackle global and regional problems based on international law, a more central role for the UN, and multilateral diplomacy,” he said. “Secondly, Russia and China, in the framework of the approaches I have set out, always support each other on concrete issues that directly affect the national interests of Russia and China. Such comradely mutual assistance is only going to be strengthened.”

Where It Is Leading

Russia and China have “a common vision of the contemporary world,” they “always support each other on concrete issues that directly affect the national interests of Russia and China,” and they have a de-facto military alliance to back it up.

Compare that reality with this forecast in the February/March 1985 Plain Truth: “Ultimately, as the prophesied united Europe rises to global superpowerdom, a fearful Kremlin would be forced to settle its differences with China—to be free to deal with rising European religious political and military leadership.

“However it happens, Russia and Asian neighbors will ultimately find themselves in some degree joining forces out of necessity to confront a power they perceive as threatening …” (emphasis mine).

Today, Europe is rising in the world. Russia and China are already responding by joining forces. What is next?

Mr. Armstrong actually forecast a Russia-China alliance as one of the events leading to the return of Christ!

The April 1952 Plain Truth foretold the fall of the Iron Curtain and the rise of a 10-nation union in Europe: “Russia may give East Germany back to the Germans and will be forced to relinquish her control over Hungary, Czechoslovakia and parts of Austria to complete the 10-nation union.”

In January 1957, Mr. Armstrong wrote: “When the right psychological moment arrives, a number of these nations will break away from Moscow.” This has already happened. Many of the countries that were behind the Iron Curtain are now part of the European Union. Watch for this Union to shrink to 10 entities, as Mr. Armstrong forecasted.

The military alliance between Russia and China is already in place. Watch for other Asian nations like Japan and India to put aside their differences as the European Union continues to rise in the west.

In 1980, Mr. Armstrong personally warned China’s then-Vice Chairman Tan Zhen-lin of this future. He recounted the exchange in the February 1980 Plain Truth: “Mr. Vice-Chairman … there will be … a union of 10 nations or groups of nations in Western Europe—and it might include two or three Russian satellite countries—in a union of church and state—brought about largely by the Roman Catholic Church. … They will have a common currency, a common government and a common military power. It will emerge out of the present Common Market. It is going to shock the whole world,” he said.

He was right! Yet how could Mr. Armstrong possibly have known these things would happen? It wasn’t because of any special insight he had himself. He knew because these events were prophesied thousands of years ago in the Bible.

Based on those prophecies, he also told the vice chairman of the hope that was on the horizon: “There will finally come … a tremendous single world power, with political and military rule over all nations—no military power to challenge it. I speak with heads of governments all over the world. All are faced with problems, troubles and evils greater than any man or group of men can handle—although many or most heads of state are unusually competent men. They are doing the best they can, and I’m trying to assist any way I can as an ambassador for world peace. But it will finally require what an American editor called the intervention of an unseen ‘strong hand from someplace’ to bring about this world-ruling Kingdom.”

Daniel 11 prophesies of a great Northern European power that will invade the Middle East and conquer Jerusalem. But notice what stops this power in its tracks: “But tidings out of the east and out of the north shall trouble him: therefore he shall go forth with great fury to destroy, and utterly to make away many” (verse 44).

Which nations are north and east of Jerusalem? Russia and China—among other Asian nations. When this European “king of the north” conquers the Middle East, these “kings of the east” will feel threatened, and will unite to mobilize militarily. This prompts the king of the north to make a preemptive strike.

In 1956, Mr. Armstrong also wrote about how this European empire would meet its end. “Plagues, terrible beyond description, shall fall upon this fascist European empire,” he wrote. “The sixth of these punishing plagues will be a military invasion of Europe by the Communist forces from Russia and the Orient. By that time, the Red Armies of Russia, China and allies will number 200 million!

“Think of it. A vast army of 200 million soldiers! These vast hordes will then sweep across Europe, utterly destroying all this resurrected Roman Empire!”

Revelation 9:16 tells of this attack by a great 200 million-man army. Where could an army this huge come from but an alliance of populous Asian nations? These nations strike back against the king of the north by forging the largest army the world has ever seen, in a colossal military alliance.

But these prophecies all end in the intervention of that “strong hand from someplace.” The book of Revelation shows that this Asian army, along with all human armies, will finally be destroyed by a triumphant Jesus Christ.

Mr. Armstrong showed that this Russia-China alliance is another step toward Christ’s return!

You can prove these forecasts from the Bible by requesting a free copy of Russia and China in Prophecy.