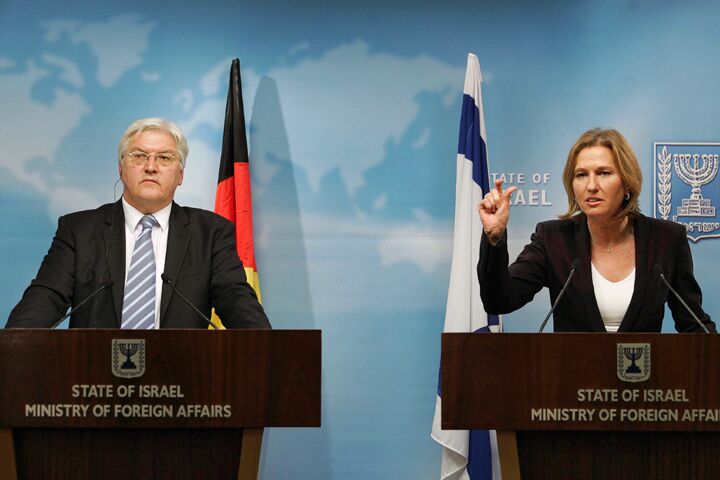 Will Bundeswehr soldiers soon be supporting the advisers Germany is already sending to the Mideast?

Not to be outdone by France and the European Union, Germany last Friday sent a delegation led by Foreign Minister Frank-Walter Steinmeier to Egypt and Israel in an attempt to broker some sort of peace agreement between Israel and Hamas. By the end of the day Saturday, it seems Steinmeier had had some measure of success.

“We agreed in the next few days a group from Germany will travel to Egypt to see how we can help equip police and provide training,” Steinmeier told reporters late Saturday. According to Reuters, “The German offer is the first proposal that appears to address Egyptian objections to stationing foreign troops on its border with the Gaza Strip.”

Berlin hopes the arrival of a German contingent will address the disagreement between Israel and Egypt about how Egypt’s border with Gaza should be secured to prevent the flow of weapons into the Strip. While Egypt objects to foreign troops being stationed along the border, it seems willing to accept technical assistance and aid from the Germans.

When asked on Friday if the German government would be prepared to send troops to Gaza should some sort of peace agreement be attained, government spokesman Thomas Steg told reporters that “the government has made clear it is aware of its responsibility and will not shy away from its responsibility.”

From a prophetic standpoint, this is an electrifying trend to watch. In an article last Wednesday, German-Foreign-Policy.com wrote:

Berlin’s foreign-policy politicians do not rule out a German military mission to the Gaza Strip. The chairman of the Foreign Policy Committee of the German Parliament (Bundestag) demands that under certain circumstances, Germany should furnish soldiers to a multinational Gaza force. The demand for German military presence in the immediate vicinity of Israel has been raised in Berlin already in 2002 and is being systematically pursued ever since, particularly via the German naval mission off the Lebanese coast. …The chairman of the Foreign Policy Committee of the German Bundestag, Ruprecht Polenz (cdu), is contemplating a Bundeswehr deployment in the Gaza Strip. This corresponds to a suggestion made by Israeli Prime Minister Ehud Olmert, who would like to establish a “monitoring system” in the war zone, for the verification of a ceasefire and the prohibition of “arms smuggling” …. Foreign-policy experts of the spd are also not excluding the sending of German forces to the Gaza Strip.

Back in 2002, when Chancellor Gerhard Schröder first raised the possibility of sending German troops to the area around Israel, he was backed by much of the German political class and by Palestinians. Support also came “astonishingly” from Israelis, according to Volker Perthes of the German Institute for International and Security Affairs. German-Foreign-Policy.com tells of one of the few voices of caution in Germany at the time:

“It should be clear to anyone who is sensitive at all” that it is impossible for Germany to send soldiers to the Israeli borders, said Wolfgang Benz, director of the Center for Anti-Semitism Studies in Berlin, detecting a “trashing of history” in the government’s Middle East plans.

Nevertheless, the years since 2002 have seen Germany establish a significant presence in the area around Israel. Here is this article’s list of these military ventures:

Germany is militarily participating in the UN’s unifil mission in Lebanon and is using this participation to arm and train the Lebanese Army. Under the direction and with the equipment of the German Navy, the Federal Police and the German customs service, Lebanon has been fortifying its terrestrial borders, also to reduce Syria’s influence and thereby strengthen the Western positions in that country. With German participation, the EU is running a training program for police officers in the Palestinian Autonomous Territories (eupol copps). They are also furnishing equipment. On the Rafah border crossing, as well, Berlin and Brussels had stationed police officers (eubam rafah), but this measure has been suspended. Last year the German Council on Foreign Relations (dgap) declared that the mission in Lebanon could “serve as a precedence for similar maritime missions in similar regional scenarios,” giving the example, “the coast of the Gaza Strip.”A Bundeswehr mission in the Gaza Strip, which would significantly upgrade German military presence at Israeli borders, seems now to be coming within reach.

Israel is looking to the administration of German Chancellor Angela Merkel for help in the peace process. Yet, behind the courageous pro-Israel viewpoint of Merkel, a highly dangerous anti-Israelism and anti-Semitism pervades the German mainstream. According to opinion polls, almost one third of Germans think Israel today is acting like fascist-era Germany. For Israel’s leaders to interpret the warmth of a few as the will of the majority is naive and foolhardy, and will ultimately lead to Israel’s downfall!

One of Jesus Christ’s signature prophecies regarding the end of this age was that there would come a point when Jerusalem would be “surrounded by armies”—and that this would be a signal “that the desolation thereof is nigh” (Luke 21:20). Put this together with other prophecies regarding the downfall of the Jewish state, and it can be determined that these armies are, in fact, European armies, and that their presence around Jerusalem signals an imminent and catastrophic double-cross.

Germany’s growing military presence in the region and discussion of expanding its role even further is a clarion signal of the fulfillment of this pivotal end-time prophecy. For more information, read Nahum—An End-Time Prophecy for Germany by editor in chief Gerald Flurry.