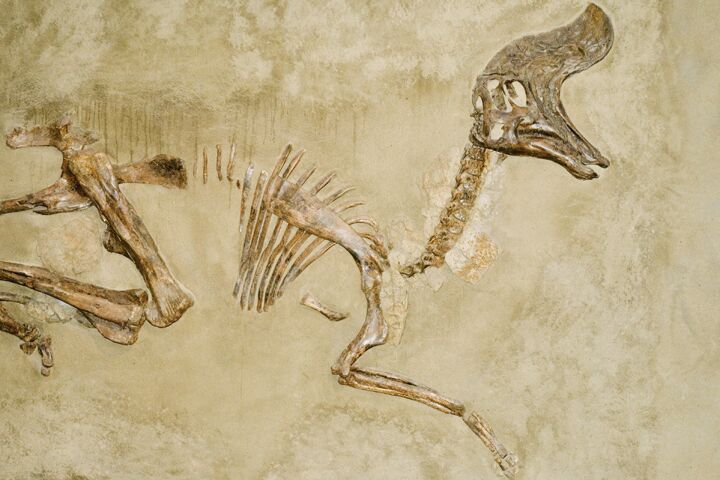 Dinosaur Tracks, the almost homemade-looking sign says on the side of Highway 160 just west of Tuba City, Arizona, on the way to the Grand Canyon. The expanse of fossils and footprints, scattered throughout this portion of the Painted Desert on a Navajo Indian reservation, attests to a dramatic moment in Earth’s history.

The site lies some miles north of an ancient meteoric crater, and the story seems relatively clear from the evidence left behind. Some footprints indicate running—confusion as traffic collided in the final moments of a chaotic world. Yet, the majority of the footprints seem to face the direction of the crater—as if these large reptiles were transfixed by a fiery display in the sky. The world around them was collapsing. Precipitation had muddied the terrain. When the meteor hit, scorching heat burst in all directions, baking this dinosaur community right into earth—the footprints, the eggs, the dung and even an almost-entire dinosaur skeleton—all of it fossilized just off this wilderness highway.

Paleontologists have left the remains there, says one of the Navajo locals who guides tourists around, though all the finds have been documented. This desert museum is one of many sites that attest to the destruction of a majestic breed of animals. These imposing creatures have captured the imagination of many a young boy, and the story as to their extinction has perplexed paleontologists, scientists and evolutionists, who can only theorize as to how the “age of reptiles” came to an end.

Mainstream Christians, on the other hand, are leery of all this dinosaur talk, fearing that—if scientists are right about these creatures’ existence—the Bible’s credibility could be forever extinguished. They assume the Earth is 6,000 years old, and that the Bible attests to that fact. This either causes them to ignore fossil evidence or to concoct outlandish theories that dinosaurs lived between Adam and the great Flood of Noah’s day.

On this point, traditional Christianity needs to be corrected. If scientists knew this, perhaps they would be less likely to dismiss the Bible as some mythical text that weaves a tale of a world much younger than they believe to exist. Science would, in fact, see the answer to the age-old mystery as to what happened to the dinosaurs! After all, science should be based on all knowledge—of which the Bible is the foundation!

The answer is in the first two verses of the Holy Bible, yet no one seems to acknowledge it!

“In the beginning God created the heaven and the earth” (Genesis 1:1). No biblical evidence suggests that this verse documents an event from 6,000 years ago—to the contrary!

Other verses confirm that God did not create the Earth in this disarray. The phrase “earth was without form” actually means, in the Hebrew, the Earth became without form and void (see Genesis 19:26 where the same Hebrew verb is used stating how Lot’s wife became a pillar of salt).

How much time passed between the creation of Genesis 1:1 and the ensuing destruction of the Earth’s ecosystem as noted in verse 2? Though the Bible does not tell us—it could have been millions or billions of years—it does tell us how the Earth came to be in such a state.

Genesis 1:2-10 indicate that the Earth was covered with water and that no sunlight was able to pierce through the impenetrable, lethal atmosphere. What God embarked on, according to this account, was a re-creation. This is what the Bible states occurred 6,000 years ago. Earth was re-inhabited with life. Psalm 104:30 shows that God renewed the face of the Earth.

Understanding this timeline allows for dinosaurs to have existed much more than six millennia ago. It is only when so-called Bible believers lock themselves into a 6,000-year-old world that they have trouble with dinosaurs. This gives birth to the erroneous notion that dinosaurs had to exist until the time of the great Flood—another Earth-wide destruction. A simple study into the account of Noah will show that he brought some of every kind of animal onto the ark (see Genesis 6:19-20). If dinosaurs had existed, they would have been on the ark—and still would have existed in large enough numbers to be documented throughout man’s history.

The Bible talks about the Earth before the re-creation of Genesis 1:2. An account like Isaiah 14:12-15 sheds light on this: “How art thou fallen from heaven, O Lucifer, son of the morning! how art thou cut down to the ground, which didst weaken the nations! For thou hast said in thine heart, I will ascend into heaven, I will exalt my throne above the stars of God: I will sit also upon the mount of the congregation, in the sides of the north: I will ascend above the heights of the clouds; I will be like the most High. Yet thou shalt be brought down to hell [Hebrew: sheol, meaning grave, pit or exile], to the sides of the pit.”

The Bible tells of an impressive angelic creature that rebelled against God before the creation of Adam. His attempt to launch a coup against God’s heavenly throne resulted in his being thrown back down to the already-existent planet Earth. Jesus Christ confirmed this during His earthly ministry: “I beheld Satan as lightning fall from heaven,” He said (Luke 10:18). Thus, unprecedented Earth-wide destruction ensued!

The story of the Bible is not about a young Earth, but an ancient one that was literally impacted by the rebellion of a great archangel so many years ago. Any details about the Earth after the re-creation are vastly different than those of the pre-Adamic world. Instead of an age where colossal reptiles roamed a planet hostile to human existence, this new age shows foliage and fruits, gardens and grains, and a dominant supply of warm-blooded mammals. This re-creation was a different Earth in that sense—a new cast of animals, where mammals take center stage while cold-blooded reptiles are more of a sideshow. Of course, the reptiles are vital to the ecosystem, but their role of dominance and grandeur is gone.

This world, after the ruins of Lucifer’s rebellion were repaired, is one completely suited for warm-blooded humankind, created in the image and likeness of God, to have dominion (Genesis 1:26). Man could not have dominated a world in the age of the Tyrannosaurus Rex or the Brachiosaurus. Nor could he have survived. The fruits and vegetables, the meat, and even the pleasant beauty and sounds of birds and flowers, were all created for the age of man.

Whether they believe the Bible or not, scientists must admit that the Bible does plainly allow for the existence of a pre-Adamic Earth and ecosystem, and for the catastrophic destruction of that world. What they will not accept is that the evidence they have uncovered proves the Bible’s explanation to be the answer to this age-old mystery!

Scientists look at the remains of the pre-Adamic world (our term, not theirs) and see fossils buried in what they say is an evolutionary order. That is what they assume—finding, we might add, no transitional fossils between these layers. This is something that still stumps the greatest scientists! The world, in truth, was actually teeming with all sorts of life of varying sizes. When destruction rained down on the Earth, rocks were laid down suddenly. Those creatures close to the impact of a meteor would have been cremated and/or buried and baked near the surface, as can be seen near that spot in the Painted Desert.

This great extinction wiped out old and young, eggs and elderly, small and large. No other explanation can account for such a dying off of these prehistoric life forms—particularly the dinosaurs, which, for example, disappeared in all regions of the world. It caused the extinction of air, land and marine reptiles.

For those who believe the Bible to be the inspired Word of God, this explanation gels with this divinely inspired text. (For more on this, request a free copy of our booklets Does God Exist? and The Proof of the Bible.)

These reptiles did not evolve into mammals. They were obliterated. The so-called Cenozoic era—the age of man’s existence on Earth, where all vegetation and life enable human survival—began after God re-created the Earth. Cenozoic rock, because it represents the age of man, consists of an entirely different set of sedimentary layers and fossils than was laid down in the pre-Adamic destruction mentioned in Genesis 1:2. In these more recent layers, not surprisingly, fossils of the warm-blooded mammals associated with man’s world predominate.

What geologists have found in Cenozoic rock is another mass burial of life. This can be traced back to Noah’s Flood, occurring about 1,650 years after the re-creation of the Earth. This worldwide catastrophe was not as severe as the pre-Adamic one, as sea life was not extinguished.

Bible and Science Can Coexist

Rather than proving evolution, the layers of fossilized rock attest to supernatural forces at work in nature: first, huge meteor showers unleashed by Satan’s war against God (Ezekiel 28:16-18) and the ensuing catastrophic Earth-wide flood; and, second, the Flood of Noah’s day, caused directly by God Himself.

Thus, there is no conflict between fossil record and biblical truth. Despite scientists’ attempts to ignore God and discard the Bible, the facts of science and God’s Word will always agree with and mutually amplify each other!