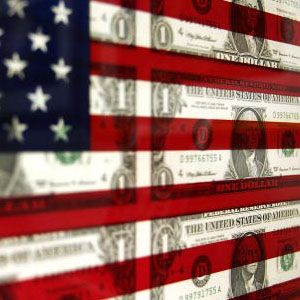 America is now the land of the “junk”-rated company. An incremental but dramatic downgrade in the creditworthiness of corporate America has occurred. Can a nation filled with junk survive an economic crisis? America is about to find out.

It may be time to lash yourself to the mast. If the Wall Street Journal is right, 2009 could change corporate America forever—and not for the better. In a very important article that went largely unnoticed, the Journalreported last month that 50 percent of all U.S. companies could be at risk of failure.

That’s right: Half of corporate America may be on the verge of bankruptcy.

The consequence of the greatest debt binge in the history of global finance may be about to slam with gale force into businesses big and small all across the country. During the Great Depression, unemployment reached 25 percent. We are well on our way.

Over the past several years, as times were good, businesses loaded up the debt like it would never go out of style. And why not? Borrowed money was making everybody rich—homeowners, stock market investors and commodity speculators, among other indirect beneficiaries.

It made perfect sense—or so it seemed. The Federal Reserve kept interest rates low, banks were practically fighting with each other to provide inexpensive financing, and as the money kept flowing, assets kept appreciating in value. After all, on a million-dollar loan you only needed to earn a 2 percent return to make $20,000. Think of how much harder you would need to work to make 20 grand with only a $100,000 loan—10 times harder. So investors competed with each other to borrow and spend.

Little thought was given to the time when the loans would come due. No big deal—just get another loan and roll it over.

It would be a recipe for disaster.

But nothing like that could happen in America, or so the corporate ceos and speculators thought. After all, America is the financial capital of the world. People will always willingly lend us money, right?

Unfortunately for the employees at bankrupted Mervyns department stores and the thousands of other companies now in the same boat, that’s what the financial wizards on Wall Street thought.

Now, 18,000 poor souls who worked for the once successful retail chain are out on the street without severance pay—in many cases, without even accumulated vacation pay. Twelve thousand more workers, some of whom have been with the company for more than 30 years, are soon to bounce out of Mervyns and into the worst job market in a generation.

But it didn’t have to end like this for this company. Debt killed Mervyns, and much of the blame lies with the three private-equity (aka leveraged-buyout) firms Cerberus Capital Management, Sun Capital Partners and Lubert-Adler.

These three companies, along with the likes of the Blackstone Group, Carlyle Group, kkr and others, epitomize the “debt is good” mentality that has turned the majority of corporate America into walking zombies—still functioning, but in actuality insolvent, and—when the loans come due—bankrupt.

When the firms bought Mervyns for $1.2 billion in 2004, they promised to reenergize the retailer. But, as it turns out, what they did was suck the life out of it. One of the first things these leveraged-buyout firms did was saddle the company with $800 million worth of debt. The new owners then promptly paid out $400 million of that to themselves in the form of dividends. They then sold off the company real-estate assets, which had the effect of doubling the company’s rental expenses. That money disappeared too.

With all the extra debt, Mervyns became so weak that it couldn’t survive even the first year of recession in America. And now that the credit crunch is imperiling many Wall Street banks, no one has been willing or able to lend new money to Mervyns for it to roll over its loans. Thus the bankruptcy proceedings. But don’t worry about Cerberus, Sun Capital or Adler. With the money sucked from Mervyns, they were able to move on to other acquisitions.

Yes, that is how these private-equity, leveraged-buyout predators work. First they identify a healthy, profitable company. Then they pay for the victim using as little of their own money as possible. The buyout is structured so that once the host company is purchased, it immediately has to take out a loan, which is then used to pay back the new owners. Essentially, the new owners pay little or nothing to gain control of the company, and feed off its assets like parasites.

If that isn’t enough of a fait accompli, oftentimes once the target company has been completely taken over, the new owners have the company borrow even more money so they can pay themselves a fat dividend check bonus. Then, if the new owners still have a functioning company on their hands, they often try to take the company public again by listing it on one of the stock exchanges and getting investors to purchase shares.

Then, on to the next target.

If Mervyns was just one sad case, it would be regrettable but survivable for America. But the leveraged-buyout boom has been massive. The credit boom of the past few years enabled private-equity pirates to plunder corporate America. And perhaps the most amazing part about this whole story is that analysts and bankers across the country viewed this whole process as positive. But that was probably to be expected—they were making a killing.

In 2006 alone, 667 U.S. companies were taken over by these leveraged-buyout firms. Hundreds more were taken over in 2005 and during the first half of 2007, before the credit crunch hit. And remember, it was often the most profitable healthy companies that were bought out, because these were the companies that could be used to borrow the most money.

According to Business Week, from 2005 to the third quarter of this year, almost three quarters of a trillion dollars of debt was put onto the balance sheets of these bought-out companies.

But now, as recession is setting in, corporate bankruptcies are on the rise. Of the 105 big U.S. corporations that have gone bankrupt this year, 66 have been owned by leveraged-buyout firms, or were recently sold by them.

The victims are piling up. In May, Linens ‘n Things went bankrupt. Most recently, the Tribune Co.—which owns the Los Angeles Times, Chicago Tribune and seven other major newspapers, the Chicago Cubs and Wrigley Field, and several television stations—filed for bankruptcy. When the Tribune Co. went private just last December, it was saddled with about $8 billion worth of debt. It didn’t even last one year.

And there are many other leveraged-buyout victims that could be waiting in the wings: chemical company Huntsman, accessories retailer Claire’s, real-estate firm Realogy (which owns Century 21 and Coldwell Banker), casino operator Harrah’s, radio company Clear Channel, Hilton Hotels, and automotive giant Chrysler, to name a few.

But it is far more than just companies taken over by leveraged-buyout firms that are in danger.

Over a year ago, theTrumpet.com warned that most U.S. companies had “junk” credit ratings—that most companies were considered at high risk of defaulting on their debts. We also reported that an astounding 71 percent of U.S. industrial companies were considered “junk” quality by Standard & Poor’s rating agency. We warned of “underlying weakness in the sector and the economy as a whole,” and a “harbinger of recession.” One year and five months later, the credit crunch that has destroyed much of Wall Street struck, and just months later, America was officially in recession.

Now the Wall Street Journal too is warning that half of corporate America could be heading for the graveyard. With lending dried up, companies can no longer borrow new money to pay back old. The loans are coming due, and unless credit markets loosen up, a tsunami of defaults is on the horizon.

But it won’t end there. The whole nation—head to toe—is sickened with debt. Federal, state, municipal, corporate, personal debt; America is maxed out. Trillions upon trillions.

That debt is coming due! And as many corporations are finding out, when you rely on debt, and your creditors cut you off, it is like trying to swim with 50-pound stones tied to your feet. You drown faster than you can say “Blackstoned.”