Want to get to know God and prove He exists? Study history. 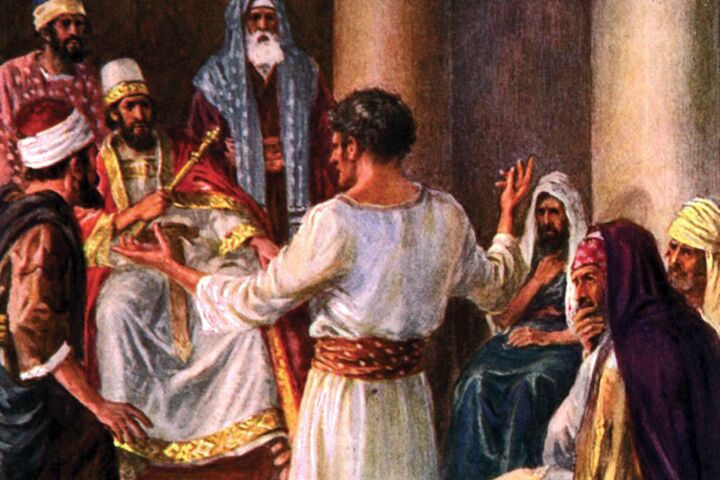 Want to get to know God and prove He exists? Study history.

History today is grossly underrated. It is maligned and devalued by modern education, abhorred by students, and forgotten by too many politicians, intellectuals and journalists.

Ironically, even most historians and others who enjoy and value history fail to grasp the critical importance of their beloved subject. In fact, history is perhaps the most underrated subject on Earth!

Whether you enjoy reading history or not, chances are that you too have underestimated the value of studying the past. Perhaps you have never fully grasped the supreme truth about history.

What is that truth? That secular history proves God’s existence!

It’s true. Documented history, be it of the Sumerians in Mesopotamia, or the ancient Egyptians, Assyrians, Phoenicians, Persians, Greeks or Romans, or Napoleon or Hitler, is real, concrete, irrefutable proof of God’s existence and the veracity of His Word.

The Scriptures and History

This fact should not be startling. After all, God tells us plainly He guides and influences world events. “Remember the former things of old,” He said through Isaiah the prophet, “for I am God, and there is no other; I am God, and there is none like me, declaring the end from the beginning, and from ancient times things not yet done, saying ‘My counsel shall stand, and I will accomplish all my purpose’” (Isaiah 46:9-10, Revised Standard Version).

God did not allow history to unfold haphazardly.

King David of Israel knew this: “Let all the earth fear the Lord, let all the inhabitants of the world stand in awe of him! For he spoke, and it came to be; he commanded, and it stood forth. The Lord foils the plans of the nations; he thwarts the purposes of the peoples. But the plans of the Lord stand firm forever, the purposes of his heart through all generations” (Psalm 33:8-11, rsv).

The Apostle Paul also recognized God’s central role in secular history, and wasn’t afraid to tell a crowd of Greeks as much while visiting Athens. Men of Athens, he said, “I perceive that in every way you are very religious,” but you cannot see the one true God, who made the world and everything in it. “[God] made from one [man] every nation of men to live on all the face of earth,” preached Paul, “having determined allotted periods and the boundaries of their habitation …” (Acts 17:22-23, rsv).

Paul knew that the rise and fall of entire civilizations, even the geographic locations of peoples, were determined by God!

These men of the Bible all recognized a profound and moving truth: They knew history was a product of God’s will and power. They knew that much of history was written by God before it actually happened—or was shaped and determined by God as it was occurring.

Yet how many people see God’s presence in secular history?

Put God to the test on this. Consider doing an in-depth study of ancient Egypt, or Assyria, or Persia, or Greece or the Roman Empire. Use the Bible as a textbook in your study. You will be floored at how closely events recorded in secular history books align with events recorded, often in advance, in the Bible.

Studying world history, especially that of Western civilization, in the context of the Bible is one of the most profound and enlightening studies you could undertake. If you’re interested in learning more about the spectacular link between secular history and the Bible, you should study The Proof of the Bible by Herbert W. Armstrong. Here, let’s consider one of the clearest and most powerful accounts of secular history proving God’s existence, and proving His Word true.

The Image of Daniel 2

The succession of dominant empires in Western civilization beginning in the 7th century b.c. is widely accepted by historians and scholars. That succession of empires, which you can find explained in detail in most any general history textbook, is as follows:

The first world-ruling empire was the Babylonian/Chaldean Empire, which became the dominant power in the 7th century b.c. after its famous King Nebuchadnezzar conquered Assyria and invaded Syria and Judah.

The second dominant empire was the Medo-Persian Empire, which, under the innovative leadership of Cyrus the Great in the 6th century b.c., defeated the Babylonians, and dominated territory from the shores of the Arabian Sea to the Mediterranean Sea.

The third dominant civilization was the vast and influential Grecian Empire established by Alexander the Great in the mid-4th century b.c. and maintained by four of Alexander’s generals after his death in Babylon in 323 b.c.

The fourth and largest world-ruling civilization was the Roman Empire, which emerged in the first century b.c. and went on to dominate Western civilization, to varying degrees, for the next two millennia.

The succession of these empires is recognized and chronicled in detail in history books the world over. Of course, other civilizations and peoples, many influential and impressive, existed alongside these four—but these four were the dominant civilizations of their time and form the backbone of history.

While history books do an excellent job detailing the rise and fall of these world-ruling empires, the Bible actually explains why they came about. It shows why there were four—first the Babylonians, then the Medo-Persians, then Greece and then Rome, in that order. These remarkable truths are found specifically in the book of Daniel.

The time setting of the book of Daniel is the 6th century b.c. In fact, read the first chapter of Daniel and you’ll see that it’s describing the sacking of Jerusalem by King Nebuchadnezzar of Babylon in 587 b.c. and his relocation of the Jews back to Babylon. Secular history textbooks describe these same events occurring at exactly the same time. Among the Jews captured by Nebuchadnezzar and taken back to Babylon was Daniel, a bright Jewish lad with the gift of interpreting dreams, who quickly became a confidant of the king.

Soon after returning to Babylon, the king had a dream that the Babylonian priests and magicians could not interpret. Daniel 2 shows that young Daniel was brought in to explain the dream to Nebuchadnezzar. Notice that the king did not explain his dream to Daniel. God revealed both the imagery and the meaning of the dream to Daniel, which he then explained in vivid detail to Nebuchadnezzar.

Read the young prophet’s explanation in Daniel 2:31-35. The king’s dream was detailed and impressive. He saw a great image, or statue, which was clearly divided into four distinct parts—its head comprised of fine gold, its breast and arms of silver, its belly and thighs of brass, and its legs of iron, with feet of a mixture of iron and clay. In the dream, the image was struck in its feet by a flying stone, which caused the image to crash to the ground, whereupon the shattered debris was blown away, and it was as if the image had never existed.

This dream, as Daniel explained further to Nebuchadnezzar, was a foundational event in world history!

After relaying the dream to Nebuchadnezzar, Daniel explained its meaning: “Thou, O king … art this head of gold. And after thee shall arise another kingdom inferior to thee, and another third kingdom of brass, which shall bear rule over all the earth. And the fourth kingdom shall be strong as iron” (read verses 37-45).

Daniel explained to Nebuchadnezzar that he, the king of the Babylonian-Chaldean Empire, was the head of gold, the first of the world-ruling empires—a fact recognized and confirmed by history books!

Daniel then told the king—the time setting, remember, is in the 6th centuryb.c.—that after the Babylonian/Chaldean Empire there would arise three successive empires, which were pictured by the breast and arms of silver, the belly and thighs of brass, and the legs of iron.

God was revealing through Daniel how the next 2,500 years of secular history would unfold!

The Medo-Persian and Greek and Roman civilizations at the time of this prophecy were mere kernels of their latter glory. God was revealing through this image that they would become world-dominant civilizations! Daniel 2 was a prophecy about the rise and fall of four world-ruling civilizations.

How can we know God was referring to these four specifically? Because the documented histories, which fill millions of pages of textbooks, of these civilizations unfolded exactly as God said they would in Daniel 2 and other prophecies in the book of Daniel. Take Daniel 8, for example. Here God revealed that the second world-ruling empire, pictured by the breasts and arms of silver in the Daniel 2 image, would be a combination of two distinct peoples that would come together to dominate civilization. If you know Persian history, you know that it was the joint efforts of the Medes and the Persians that defeated the Babylonians and established the great Persian Empire.

God revealed similar details about the Greek and Roman empires, even though they didn’t emerge as world-dominant civilizations until two or three hundred years later.

If you study the entire book of Daniel, you will realize it’s filled with history recorded before it actually happened!

There are countless thrilling details revealing God’s presence and role in history. Daniel 2 is simply one example. To learn more, request and read Daniel Unlocks Revelation, The Proof of the Bible and, most importantly, The United States and Britain in Prophecy. Study this literature in conjunction with some good secular history books, and you’ll be flabbergasted at the connection between secular history and the Bible.

Let’s stop rejecting and underrating history, and learn to study the past in the context of the Bible. Doing so makes studying history a riveting and moving experience—one that helps prove the existence of God and the absolute accuracy of His Word.