An Army of None

Signs of the times: The military’s telling manpower shortage. 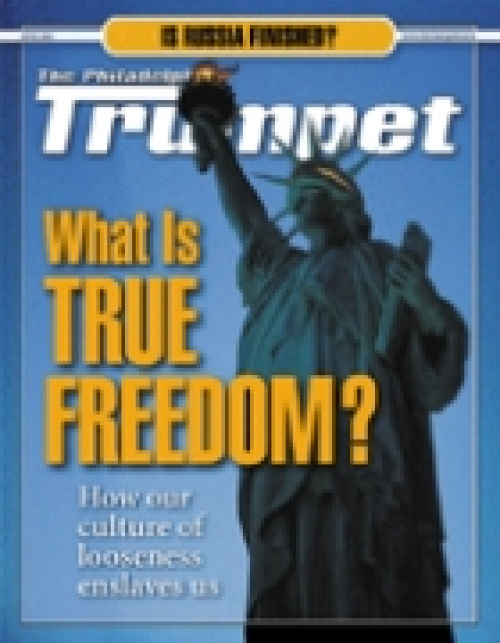 The U.S. Army has a major problem. It is facing one of the largest manpower shortages in its history.

Consider this fact: From the Korean War until Vietnam, 75 percent of male high school graduates and 70 percent of all college graduates in the U.S. served in the military.

All that changed with Vietnam. The fighting and dying in Vietnam was done principally by the sons of factory workers, secretaries, farmers and waitresses. Those who scored well enough on scholastic aptitude tests, and who had a family bankroll and the right connections, were able to avoid the service.

Since that time, recruitment numbers have declined in all branches of the U.S. military—most notably in the Army. The Army has reportedly “missed its recruiting goals in three of the past six years, and barely met them in the other three” (U.S.News & World Report, Jan. 22).

There are several possible explanations: The economic boom of the late 1990s and the lure of get-rich-quick jobs in the private sector might have siphoned off many potential recruits. Some might be disenchanted by the nature of recent military decisions, or worried about cutbacks in defense spending.

But possibly the most significant factor is the mindset of America’s youth. It appears Generation Y simply no longer views the military as a viable career option. High school and military academy recruiters say today’s youth simply don’t care about what is going on in the world. Neither will they abide the rigorous physical work of enlistment. Moreover, they are averse to the strict hierarchy and regimentation among the ranks. Soldiers must follow orders, work selflessly as a team, and risk getting shot at from time to time.

To deal with the dilemma of lackluster recruiting campaigns in recent years, the Army looked for how to update its image. “On the basis of the findings…the Army apparently concluded that the current generation of young people is so individualistic, so resistant to authority and rules, that it has to market military life as the natural home of the free-wheeling unfettered spirit” (ibid.). Consequently, the U.S. Army has abandoned its 20-year-old slogan, “Be All You Can Be,” and adopted a new one: “An Army of One.” The Army launched its new $150 million recruiting campaign in January, with prime-time television spot ads airing during popular youth-oriented programs, as well as radio, Internet and print advertising pitched to 18-to-24-year-olds.

In addition, Army recruiting battalions are being sent onto city streets and into subway stations like Grand Central and Times Square to hand out recruitment pamphlets. “The subway strategy is a sign of how the military has had to beat the bushes extra hard across the country to meet its enlistment quotas” (New York Times, Jan. 20).

The situation is equally bleak across the Atlantic Ocean, among the British armed forces. The March 21 edition of Jane’s Defence Weekly reports that enlistment numbers in the British Army during the fourth quarter of 2000 were 11 percent less than the similar period in 1999. Presently, the Army is “at least 8,000 recruits short of [its] target,” according to Col. Bob Stewart (Daily Mail, April 30).

The British Army, like the U.S. Army, turned to a civilian recruiting agency—Glasgow-based recruitment firm Search—for help. Last April it began a 12-month multimedia marketing campaign aimed at “ambitious young people seeking to acquire well-paid skills that could last a lifetime both within and outside the Army” (Press Association Newsfile, March 12). Other branches of the military are using similar tactics.

In addition to trying to attract new enlistees, Britain’s Ministry of Defense is bending over backward to try to keep hold of existing military personnel: Drill sergeants are required to lower their voices on the parade grounds so as not to upset the troops with the traditional “bark.” Fitness standards have been lowered to suit the needs of a modern generation that can barely tolerate wearing boots because they have spent their whole lives in tennis shoes and flip-flops.

Additionally, more attention is being given to the sexual health of conscripts. Condoms are made available. Regimental health officers give aids awareness advice. Free cosmetic surgery and sex change operations are offered to help deal with those who, according to the Ministry of Defense, have “serious psychological problems.” (Ironically, despite these efforts, aids cases in the military have doubled in four years. More than 1200 British servicemen and women are now hiv positive.)

Needless to say, both America and Britain seem to be ignoring the fact that the armed forces require hierarchy, discipline and a certain ruggedness. Soldiers should be physically tough and mentally balanced.

The personnel problems in the U.S. and British armed forces might not seem like a big deal to some. Nevertheless, these problems indicate an underlying attitude of licentiousness which, if not corrected, will undoubtedly spell disaster for these two once-great and blessed nations.

God has already broken the pride of our military power (Lev. 26:19). He prophesies in Ezekiel 7:14 that in the near future, when the alarm of war sounds, nobody will go to battle.