Musical group represents a college and a vision of the future. 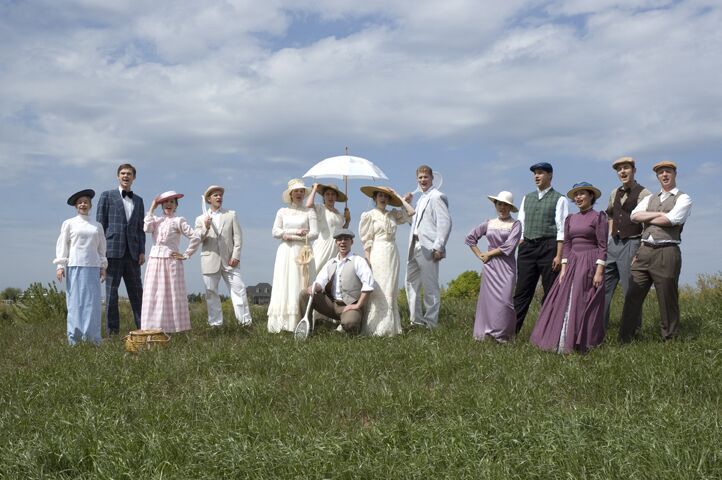 Musical group represents a college and a vision of the future.

Dressed in the dazzling and the debonair, seven young men and seven young women explode onto the stage—every movement drenched with enthusiasm, every face charged with a joy that literally begins to shake the room. An entire elementary school student body is clapping, tapping and cheering to the upbeat look and sound of this unique group. They have attended “show choir” assemblies before—but there is something special about this one.

That is a typical reaction to a performance by the Herbert W. Armstrong College Young Ambassadors—a 14-member singing and dancing group that tours the community and produces an annual film that features an inspiring and uplifting musical revue.

This college is sponsored by the Philadelphia Church of God, which also sponsors the Trumpet magazine. Since Herbert W. Armstrong College is patterned after Ambassador College (founded by Herbert Armstrong), it is only fitting that we resurrect the same group which so magnificently represented that college. The term “show choir” doesn’t quite do justice to what they accomplished under Mr. Armstrong. They truly were ambassadors. Each year, they produced full-length films that gave an entertaining tour of the campus and were viewed each fall by Worldwide Church of God members at Feast of Tabernacles sites around the world. Two of those films, Festival 1981 and Festival 1982, were even broadcast on Jordan tv, which showcased the college to the entire nation of Jordan and surrounding Middle East nations.

What the Young Ambassadors really represented was a wholesome, uplifting form of entertainment that has become more and more rare since their founding.

Their biggest fan, Mr. Armstrong, had some of the Young Ambassadors over to his home one evening in 1984—an event that was filmed and included in Festival 1984. “You Young Ambassadors are doing a great service to the people of the Church,” he told them, “and many of the children are beginning to learn a better kind of music ….” He then explained how so much of modern music was “one of the things that [is] ruining young people right along with drugs, excess alcohol, illicit sex. Those things all go together—and wrong music. It’s time that the people in the Church know the difference in music, and I’m glad they’re coming to learn some of the music that you young people sing.”

Mr. Armstrong said that one of the highlights of his year was getting to preview those festival films. He watched them again and again. He even viewed one of these films with Israeli leaders in his hotel room during a visit to Jerusalem, and “they thoroughly enjoyed it,” he told Church members (member letter, March 25, 1983).

Mr. Armstrong died in 1986; the Young Ambassador program died with Ambassador College in the early 1990s. Those Young Ambassadors who inspired Mr. Armstrong, thousands of Church members (this writer included) and even a select portion of world leaders left some big shoes to fill. We knew that when we resurrected the YA program in the fall of 2005.

Since then, the Herbert W. Armstrong College Young Ambassadors have been living up to their name—representing the college, the pcg and fine entertainment to all those they come in contact with.

We have produced three festival films (Festival 2006, Festival 2007 and Festival 2008). Taping usually occurs on the hwac campus and mostly during the students’ spring break. Sometimes the group will venture out to film at a specialized location that fits a particular song. The group has filmed at several places around Oklahoma.

It’s not just the film locales that take the group off campus, though. The Young Ambassadors perform for the community at elementary schools, retirement homes and dinner club meetings. The group sang the United States national anthem for Oklahoma City’s minor league baseball team in May 2007. They also performed for the LibertyFest parade on July 4, 2006. They sang and danced on a float they built, and won fourth place in their category for the float. (Some of these performances can be viewed online.)

As artistic director, I am privileged to work with these fine young people and follow them on their community tours. The reactions they receive from the community venues where they perform are truly stunning. Most of those booking us know that we represent a church-sponsored college—but we don’t go to them with religion. We don’t go to them with songs about Jesus (the public schools would kick us out faster than you could say “bebop”). We simply showcase our repertoire of uplifting, wholesome music: including Broadway musical numbers, Disney favorites, swing/jazz hits and popular ballads. In a world where dancing has become negative, androgynous, arrogant and provocative, our dancing emphasizes positive energy, masculine and feminine grace, poise, strength, athleticism and artistry, and absolutely nothing sexually charged.

Most of our Young Ambassadors are not trained singers or dancers. Our recordings aren’t necessarily of Grammy-winning caliber, nor are our couples ready to hold their own at the next ballroom competition. The oohs, ahs, clapping-along and cheers we receive from our audiences, however, remind us simply of what a refreshing breath of air this type of entertainment is in this dark world. We hear reports of parents talking about the assembly their child went to and how that was all the students could talk about when they got home.

Our college’s motto is “Education With Vision.” Here we teach a vision of a time when godly education will permeate the planet. Our singing and dancing—though many songs are of yesteryear—evoke music and entertainment of a future time. We represent not only a college or a church, but a world soon to come.