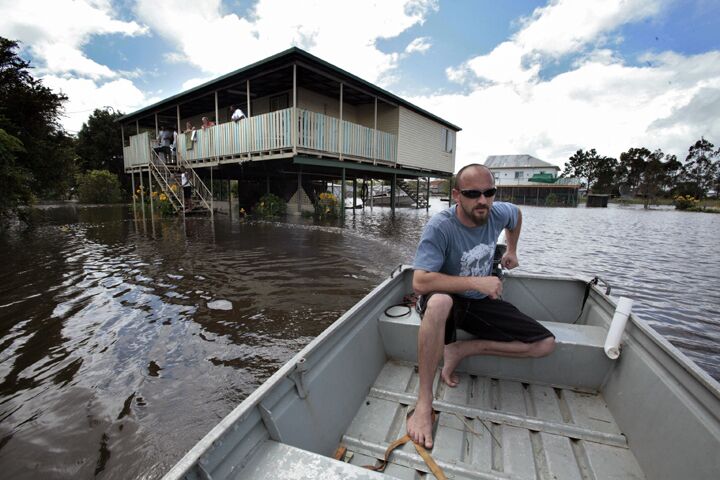 Recent extreme weather has left multiple thousands dead, injured or homeless. These disasters are part of a much wider trend developing in the weather.

Extreme storms, droughts, wildfires, cyclones, tornadoes, floods, and heat waves followed by unseasonable cold snaps, have left thousands dead and multiple thousands injured or homeless around the globe. But the climatic disasters seen so far this year are part of a much wider trend developing in the weather.

During the past 100 years or so, global surface temperatures have gradually increased. This, together with a 50-year meteorological lull (1910 to 1960), helped produce greater worldwide agricultural yields at the start of the last century. By the mid-1950s, output had reached record levels. The 1960s saw the birth of the so-called Green Revolution, spurred on by new hybrid seed, expanded irrigation, and chemical fertilizers and pesticides that promised to alleviate world hunger.

As a result of this shift in the weather, there has been a significant increase in economic losses, injuries and deaths. What is more, the promises of nonstop bumper crops underpinned by the agricultural miracles of the 1960s have clouded over.

Insurance companies and meteorologists generally accept that the weather is becoming progressively more unstable. Human efforts to improve farming methods, forecast and even manipulate the weather have redoubled. Yet, in the end, these efforts are of no avail.

When wild weather strikes, we suddenly realize that few things affect us more than our climate. History shows that whole societies have risen or fallen because of favorable or nasty weather.

What are the real causes behind today’s weather upsets? Why are climatic conditions worsening?

Climatologists know that climatic change results, in general, from innate variations in the naturally occurring phenomena that produce this Earth’s weather cycles. For years, scientists have studied signals such as oscillations in high-altitude jet streams and ocean currents, as well as solar radiation variation and volcanic activity.

However, many scientists and environmentalists now say human beings are agents of environmental change, though they are unclear as to what degree. There is a lot of debate on this issue at the moment, and quite a bit of conflicting data on both sides. (Read our article “A Really Inconvenient Truth” for more details.)

Current research has directly linked air pollution to weather upsets. There is indication that smog from industrial activity, smoke from slash-and-burn deforestation in developing countries, widespread replacement of green and open land surfaces by pavement, asphalt and buildings, and the exhaust of jets, cars, trucks, trains and ships have contributed to climatic variation.

There are many other suspected weather-modifying agents, such as crop irrigation and the creation of man-made lakes. The influence of diverted rivers, dams, drained swamps and underground aquifers may be significant too because of the effect the water-versus-land ratio has on the heat balance.

Not only that; now mankind is attempting to intentionally change weather through various experiments. For example, “cloud seeding” is intended either to produce needed rainfall or prevent cloud water from condensing into raindrops and snowflakes in an effort to head off severe storms and prevent flooding.

There is abundant evidence that we have abused, polluted, tarnished and ruined nearly everything our hands have touched on Earth.

In times past, when severe weather continually affected a particular area of the world, people simply migrated away from that area. But now, because of fixed borders and overpopulation, little new land is available anymore.

Today, the world is primarily dependent on the U.S., Canada, Australasia, Argentina and parts of Western Europe to supply the surplus foodstuffs to meet the deficits elsewhere in the world. Any time a bad year or two of weather affects these nations, it affects the rest of the world too.

Also, we have narrowed the number of plant species on which we depend for food. According to the World Resources Institute, humans have historically used about 5,000 species of plants as food, but only 150 or so have entered world commerce and less than 20 provide most of the world’s food. Just three grass crops—wheat, rice and maize (corn)—account for roughly 60 percent of the calories and 56 percent of the protein that we consume directly from plants. By narrowing our variety of world food crops, and by failing to store up enough excess grain for the future, we have increased our vulnerability to weather upsets. In addition, in the U.S. many corn crops are being sold for ethanol production, which could have an increasingly detrimental effect on the world food supply (see our article “Ethanol: Is It the Answer?”).

In addition, never before has there been such potential for human suffering due to climatic disasters. The tremendous rise in population the past century has placed more people at risk when an extreme weather event occurs. Rapid growth in coastal populations places more people in harm’s way when hurricanes or tropical storms strike. Also, a significant increase in the number of homes and businesses built in flood plains over the past 50 years increases the risk and frequency of high-cost flooding events.

Because of these societal trends, cost-per-disaster figures have risen. In the U.S. alone, 39 weather-related disasters occurred during the decade of 1991-2001 in which overall damages reached or exceeded $1 billion at the time of the event. The total damage costs exceeded $134 billion.

Since then, disasters have escalated, and many climatologists’ theories point to worse times ahead.

But, the question remains: Are the adverse weather phenomena that we are experiencing more frequently today than in the past due to the impact of the hand of man, or is there another power at work effecting changes in Earth’s climate?

Meteorologists may be able to predict the weather in the short term, but they still do not know the extent to which climatic changes or climatic variability may be accurately predicted in the long term. They admit they don’t know why major global-impacting weather forces, such as high-altitude jet streams or powerful ocean currents, shift as they do.

Weather experts are only able to rely on scientific observation, experimentation and reason—physical evidence—to forecast weather in the short term. But this tells only part of the story. There is another little-used source we can turn to for the other portion of the picture. It claims to pinpoint the causes of weather cataclysms, and to forecast long-term weather trends. Yet it is a source whose veracity most people would naturally question.

That source is the Book that most people have on their bookshelf, but few understand: the Holy Bible.

Can this Book of books really tell us the real cause of weather crises? Yes it can—and it does—though many would scoff at this claim.

The Creator God of the Bible clearly asserts that He controls the weather. And in His Word He challenges us to believe Him!

The Almighty Creator of the universe says He causes the sun to rise on the evil and on the good, and sends rain on the just and on the unjust. He sends the snow and ice as well as drought and heat. He bathes the Earth with gentle rain to show His loving concern, yet also sends flood and mildew to punish. Check it out for yourself in the following scriptures: Matthew 5:45; Job 37; Deuteronomy 28:22.

The Bible also reveals that God has set spiritual and physical laws in motion, and that He is presently allowing humans to develop their own ways of living—contrary to His laws—and to reap the natural consequences that result from those ways, including weather upsets.

Further, God, in His great purpose, also allows Satan the devil—the current (and temporary) god of this world, according to 2 Corinthians 4:4—to have a role in producing catastrophic weather, for man’s ultimate learning (see Job 1).

Mankind, in explaining weather, looks only to material causes—physical phenomena measurable by scientific instruments—yet the Bible shows that there is a spiritual dimension to this question!

Yet, most people today consider themselves too sophisticated to believe such a thing. Others swing to the opposite extreme and blame it on superstition.

Almighty God tells us that the real cause of our upset weather conditions involves sin—which is defined as the breaking of His laws (see 1 John 3:4). God uses weather to correct and discipline His creation—to help us realize the error in our lifestyle.

King Solomon understood the connection between the transgression of God’s law and bad weather. When he dedicated the temple of God, Solomon prayed, “When the heaven is shut up, and there is no rain, because they have sinned against thee; yet if they pray toward this place, and confess thy name, and turn from their sin, when thou dost afflict them; Then hear thou from heaven, and forgive the sin of thy servants, and of thy people Israel, when thou hast taught them the good way, wherein they should walk; and send rain upon thy land, which thou hast given unto thy people for an inheritance” (2 Chronicles 6:26-27).

Weathermen and news reporters would ridicule the idea that wrong ways of living—wrong lifestyles, morality and thinking—and chaotic weather are related. But in doing so, don’t they in effect consider themselves wiser than Solomon? In reality, they, along with the majority of mankind, have been deceived by the great unseen spiritual adversary of this world (Revelation 12:9), and will end up being victims of the very prophecies they reject unless they repent.

So what is the Bible’s weather forecast for the near future? The answer to that question is directly related to the moral and spiritual state of the world. Because that is prophesied to decay (a reality we already see around us), so too is the state of our weather.

The chaotic weather we have experienced in recent decades will soon seem tame by comparison, unless we alter our present course as a civilization. In the not-too-distant future, our weather is going to go completely haywire (see Revelation 6:5-8; 8:4-12). The powerful natural forces of weather are going to be unleashed upon a disobedient world, armed with terrorists and wmds, to bring it to its knees in repentance.

We should consider the worsening weather trend a warning from Almighty God—a warning to the nations today to turn from materialism, false religions and all the sundry sins that are leading us away from the true path of peace and abundant living. We can expect our weather to get worse until we acknowledge our Creator, get down on our knees and pray that God would grant us repentance and give us the power necessary to keep His law.

In Leviticus 26, God promises “rain in due season” and that “the land shall yield her increase” (verse 4)—“if ye walk in my statutes, and keep my commandments, and do them” (verse 3). Were the nations to do so, we would find ourselves blessed with beautiful weather and stable climates. We would not have to fear crop failures and famine, or being killed in a severe weather event.

We can experience prosperous living with pleasant, healthful weather—when mankind is willing to acknowledge and obey God, His laws and His benevolent rule. That will mean the dawning of a new age—a utopian time of perfect weather and peace and happiness everywhere.

If you would like to know more about that soon-coming world, request a copy of our free booklet The Wonderful World Tomorrow—What It Will Be Like.