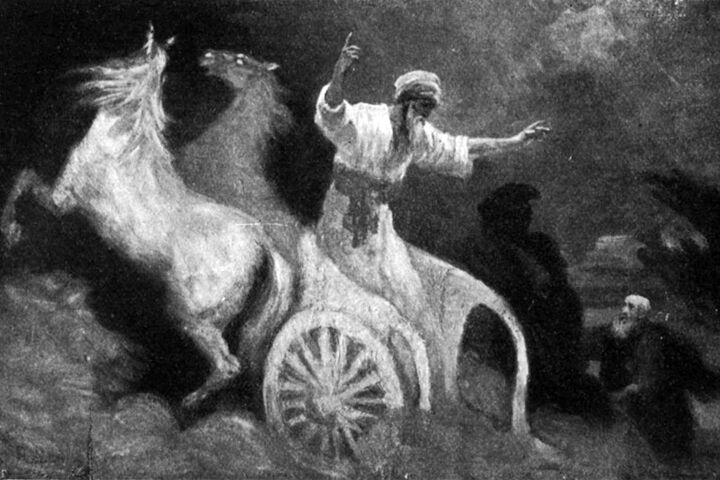 Elijah being whirled away from his followers in a fiery chariot is one of the most dramatic scenes in the Bible. Where Elijah went, however, is completely misunderstood by most.

After appearing to His disciples for 40 days after His resurrection, the living Jesus Christ ascended to heaven and assumed His place at the right hand of God the Father. The way traditional Christianity tells the story, Jesus ascended to a great company of saints who were already there—and He is there right now with billions, perhaps, of believers who have lived a “good” life, died, and continued on living in heaven as their reward.

But is heaven the reward of the saved? That’s what mainstream Christianity would have us think. To support that claim, many will point to the story of Elijah’s departure from Jericho as proof that the righteous go to heaven upon death.

2 Kings 2:11 reads, “… behold, there appeared a chariot of fire, and horses of fire, and parted them both asunder; and Elijah went up by a whirlwind into heaven.”

Even many Jews read this passage to mean that Elijah died, went to God’s throne room and, soon, God will send the same prophet back to this Earth before the coming of the Messiah.

Did Elijah ascend to heaven? Did he even die at this point in the story? Is this story proof that the reward of the saved is heaven after death?

What Would Jesus Say?

Jesus Christ said, “And no man hath ascended up to heaven, but he that came down from heaven, even the Son of man which is in heaven” (John 3:13).

This is the Being who, this passage says, “came down from heaven.” He had lived there, and so certainly He would have been the authority on whether Elijah had been up there with Him!

This proof in the form of Christ’s own words brings us to an apparent contradiction. How could no man have “ascended up to heaven” and yet the chronicler write that Elijah “went up by a whirlwind into heaven”?

If we accept the facts that God cannot lie (Titus 1:2), that every word of the Bible is true (Luke 4:4; 2 Timothy 3:16) and therefore that the Scripture cannot contradict itself, there must be a viable explanation. That explanation lies in the broad definition of the word heaven.

The Bible uses the word heaven to describe three very different places: God’s throne room (Hebrews 8:1); the physical universe, where the stars and planets reside (Psalm 8:3); and the Earth’s atmosphere: Genesis 1:20 speaks of a “fowl that may fly above the earth in the open firmament of heaven.” Genesis 27:28 and Deuteronomy 33:28 show that the “heavens shall drop down dew.” This again, is speaking of the Earth’s atmosphere.

So, in proximity to Earth, we could label the heavens that the Bible refers to as the first heaven, the sky within the Earth’s atmosphere; the second heaven, outer space; and the third heaven, God’s spiritual throne room. (2 Corinthians 12:2-3 actually use the phrase “third heaven” to describe God’s throne room.)

He could not have gone to the heaven of God’s throne (so says Jesus Christ), so where did he go? It should be obvious: Elijah “went up by a whirlwind into heaven,” or into the first heaven—the atmosphere surrounding the Earth, where birds fly and whirlwinds can exist!

So Elijah only ascended into the sky on this fiery transportation device. What’s more, this was not an ascension upon death: Elijah survived this ordeal! The context of the verse in 2 Kings 2 reveals that Elijah was talking about being “taken away from” Elisha—not that he was facing death. The purpose was a changing of the guard in the leadership of God’s work.

Of course, one could argue that being “taken away” was figurative or poetic language for death. But notice 2 Chronicles 21. Elijah was heard from again in another part of the region.

At this point in the chronicle, about 10 years had passed since Elijah was taken away from Elisha and the sons of the prophets. The story picks up in the land of Judah (Elijah’s work had primarily involved the kingdom of Israel). King Jehoram was going the way of Israel—setting up idols in the nation. “And there came a writing to him from Elijah the prophet, saying, Thus saith the Lord God of David thy father, Because thou hast not walked in the ways of Jehoshaphat thy father, nor in the ways of Asa king of Judah, But hast walked in the way of the kings of Israel … like to the whoredoms of the house of Ahab …. Behold, with a great plague will the Lord smite thy people …” (verses 12-14). Read the entire frightening prophecy and its fulfillment in verses 12 through 20.

Imagine the horror of receiving this sentence, much less from a prophet who had come out of hiding to deliver it! The wording of the prophecy is clear. Elijah wrote this after the king had set out on this course, and the message also concerned future events.

The Bible states that the dead know nothing (Ecclesiastes 9:5, 10; Psalm 146:4). If Elijah had died, he would not have known all that had happened, much less been able to pen and post a prophetic letter!

Those who think God gave Elijah endless life of three millennia already are reading into the Bible what is not there. Elijah was a mortal man, subject to death as all are (Hebrews 9:27); and, after being lifted by angelic chariot into the atmospheric heavens, he spent the remainder of his days at some undisclosed locale until he naturally died.

Where Is the God of Elijah?

Some try to focus on where Elijah went, using his miraculous transportation from Jericho as proof of their erroneous beliefs. No one knows where he went—and that’s the point.

Elijah had given his mantle to Elisha (1 Kings 19:19) as a symbolic gesture of God’s work passing to Elisha’s authority. Once Elijah was gone, Elisha knew Elijah’s whereabouts were irrelevant.

The question was, where is the great God who performed all those miracles through Elijah? Who parted the Jordan with the mantle of Elijah? Where are God the Father and Jesus Christ?

Our High Priest has ascended into the third heaven. No man is there. And our focus must be on Him and the work He is doing there.

As for Elijah’s prophesied reappearance just before the Messiah’s coming (Malachi 4:5-6), the prophecy concerned someone to come “in the spirit and power of [Elijah]” (Luke 1:17). John the Baptist fulfilled this prophecy in type (see also Matthew 17:12-13). But Jesus also prophesied that a type of Elijah would appear before His Second Coming—to “restore all things” to His Church (Matthew 17:10-11). And who fulfilled that role in this end time is another subject (see Mystery of the Ages for more).

Scripture shows that it is “appointed unto men once to die” (Hebrews 9:27). Elijah is dead, buried—his physical body has decayed. We must focus on the Eternal God of Elijah.

For more on the reward of the saved, please read Herbert W. Armstrong’s book The Incredible Human Potential.