How the mainstream press has missed the most important angle on events in the Balkans. 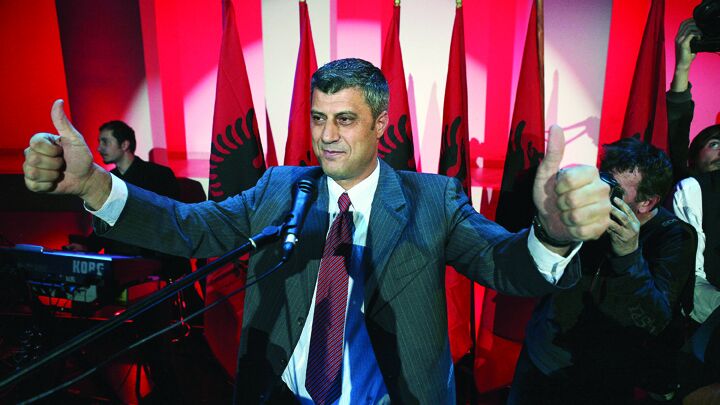 How the mainstream press has missed the most important angle on events in the Balkans.

On back-to-back days in December 1991, the New York Times published articles highlighting Germany’s alarming and audacious decision to recognize and legitimize the efforts of Slovenia and Croatia to break away from Yugoslavia. Both articles were refreshingly honest and held little back in their analysis of Germany’s seminal role in the violent fragmentation of Yugoslavia.

In the second of those two articles, Paul Lewis cited European diplomats who warned that Germany’s decision to support Croatia and Slovenia, despite opposition from virtually the rest of the world, “underscored Germany’s growing political power in the 12-nation European Community.” Germany’s incursion into the Balkans, wrote Lewis, “has worried many in Europe who see it as an attempt to re-exert traditional Germanic influences over this area of the Balkans” (Dec. 16, 1991; emphasis mine throughout).

Lewis exhibited little reticence in exposing the German undercurrent in what was unfolding in Yugoslavia, even when it meant connecting Germany’s decision to recognize Croatia and Slovenia in 1991 to its sordid history with these entities during World War II. He wrote, “[I]n its unusual assertiveness in moving ahead with a plan to extend diplomatic recognition to the breakaway Yugoslav republics of Croatia and Slovenia, Germany has stirred troubling historical associations …. Nazi Germany dominated the two Yugoslav regions during World War II, absorbing Slovenia into the Third Reich and creating a puppet regime in Croatia.”

A month later, the Times wrote this: “Germany’s decision to press for quick recognition of the two republics, disregarding appeals from the United States and the United Nations, marked a new assertiveness that some Europeans find disconcerting” (Jan. 16, 1992).

Just 16 years ago, a mainstream news organ like the New York Times was not afraid to report the reality that Germany was manipulating the Balkans in an effort to “re-exert traditional Germanic influences” over the region. A willingness to analyze the Balkans through the German prism was plainly evident.

How times have changed.

On Dec. 10, 2007, the deadline for a mutual solution to the Kosovo dilemma expired, and Kosovo Albanians, led by former terrorist leader Hashim Thaci, said they would immediately start finalizing their declaration of independence from Serbia.

The subject of Kosovo’s independence does not lack coverage. What it lacks is the kind of fresh, up-front, in-depth reporting practiced by the likes of the New York Times when it covered Yugoslavia’s dissolution in 1991-92. When Croatia, Slovenia and Bosnia broke away from Yugoslavia in the early 1990s, the Times didn’t hesitate to declare Germany’s pivotal and alarming role in the crises (though later, when the U.S. and British governments switched sides, so too did the Times).

Now Kosovo may well be on the verge of erupting again, and few people, certainly not the mainstream press, are talking about Germany’s fundamental role in this crisis!

Why not? It’s a blockbuster angle!

What’s happening in Kosovo is covered with German fingerprints. It was Germany (and the Vatican) that first legitimized the dissolution of the state formerly called Yugoslavia. The day Bonn threw its weight behind Croatia’s and Slovenia’s decision to break away in 1991 signaled the beginning of the breakup of the whole Republic of Yugoslavia and the inevitable takeover of the strategic Balkan Peninsula by the European Union.

This was the signal that the ex-Soviet state of Albania needed to stimulate its efforts to gain the enclave of Kosovo—something it had long felt was its right.

This intimate involvement with Kosovo by Germany, one of Albania’s most important and long-standing supporters, has manifested itself in very practical—and dangerous—ways. The German government has been closely linked to the Kosovo Liberation Army (kla), an Albanian terrorist organization that during the early-to-mid-1990s was linked to the Albanian mafia in Kosovo and other Islamic terrorists in the region.

In 1996, the German foreign intelligence service (bnd) established a major outpost in the Albanian city of Tirana, where kla terrorists were trained to fight against Serbian authorities. According to Le Monde Diplomatique, “special forces in Berlin provided the operational training and supplied arms and transmission equipment from ex-East German Stasi stocks as well as black uniforms” (May 1999).

Germany also gave financial support to the kla. bbc News reported that Kosovo’s “internationally unrecognized government-in-exile” was collecting taxes, and that its prime minister, based in Germany, “has repeatedly denied that the money is used to buy arms—he says that it’s spent on running the health and education services” (Aug. 5, 1998). Did anybody believe that? Here’s what Trumpet editor in chief Gerald Flurry wrote about that in July 2002: “Kosovo’s ‘internationally unrecognized government-in-exile’ had a prime minister who was based in Germany and operated freely with the blessing (perhaps even the direction) of the German government! So Germany recognized Kosovo’s government-in-exile when nobody else did. But the international community submissively followed Germany’s lead.

“The kla guerrillas didn’t just happen. They were essentially raised up and directly supported by Germany—the powerhouse of Europe.”

How many analysts, when they consider Kosovo’s independence today, are factoring in Germany’s central role in the growth and expansion of the kla? How many wonder why Germany would be so interested in, and go to such great lengths to secure, Kosovo’s independence from Serbia? What’s in it for Germany?

These questions lie at the heart of analysis on Kosovo—but few are asking them!

The Trumpet has explained how, under the umbrella of NATO, Germany and Europe have, since 1991, dramatically increased their influence in the Balkans. By employing a subtle diplomatic divide-and-conquer policy, Germany has precipitated the systematic and violent fracturing of Yugoslavia. It was Germany that, in 1999, through cunning use of exaggerated and inaccurate claims and emotive language, stirred NATO, predominantly comprised of U.S. troops, to bomb Serbia.

In March of that year, German Defense Minister Rudolf Scharping said in a television interview on zdf that “genocide is starting” in Serbia. His alarmist vocabulary helped turn the collective Western mindset against Serbia. The Australian reported on April 1, 1999, “With thousands of refugees continuing to stream out of the war-torn province, German Defense Minister Rudolf Scharping claimed in Bonn last night that evidence had emerged of concentration camps being set up by Serb forces.”

“People watched television and saw the streams of Albanian refugees,” wrote Gerald Flurry at the time. “Then they totally blamed the Serbs. Most knew very little about Kosovo, yet spoke of ‘genocide’—the deliberate and systematic destruction of a race. Then came talk about ‘concentration camps.’ Genocide and concentration camps—words introduced by the German defense minister” (The Rising Beast—request a free copy of this booklet).

Are Serbian leader Slobodan Milosevic’s supposed atrocities against Albanians the real reason America and NATO bombed Belgrade into submission? During the 1990s, actual genocides were occurring in Rwanda and Sierra Leone—not to mention the slaughter of Serbs by Croatians and the Kosovo Albanians themselves—and the Clinton government did little to intervene. Why was America prepared to bomb Serbia into submission, but not the evil forces killing hundreds of thousands of innocent victims in Rwanda or Sierra Leone? Because America was pressured into bombing Serbia! A German-led European Union convinced all of NATO to fight for its Balkan cause!

From the very beginning, a heavily Germany-influenced EU has been determined to conquer the Balkans, by a deft combination of force and diplomatic maneuvers.

In 2003, EU Commission President Romano Prodi promised that all Balkan countries—if they danced to the EU’s tune of course—could “become members of the EU one day.” While they might not necessarily become members on the same day, and each would have to follow its own course, he said, nonetheless, “in the long run, [the] Balkans belong strictly to the EU” (EUobserver, Jan. 10, 2003).

Out of the abundance of the heart the mouth speaks!

This is why Germany wanted Serbia, its historical enemy and counterweight in the region, neutralized by NATO. Germany and the EU believe the Balkans belong “strictly to the EU.” Without the pesky Slobodan Milosevic around to interrupt their plans, Germany and Europe could more easily conquer the Balkans!

Any in-depth analysis of the events unfolding in Kosovo must account for this history.

A “Fast and Decisive” Europe

The International Herald Tribune reported on Dec. 12, 2007, about a plan concocted by Slovenia (which now holds the EU presidency) by which the European Union will embrace Kosovo when it declares statehood. The EU is prepping itself for action in Kosovo.

The Tribune quoted one diplomat who said that if violence breaks out in Kosovo, Europe’s response must be “fast and decisive because the EU is showing it’s boss in its own courtyard. We want to show we don’t need Washington or Moscow to tell us what to do.”

Considering the history we just covered, against whom do you think Germany and the EU will take action?

Wolfgang Ischinger, the German diplomat representing the EU in the group of three international mediators (Russia, the United States and the EU) in the situation, has said that when Kosovo declares its independence, “It will be a state entity which will continue to be under broad international observation. The NATO troops will continue to be deployed there. A further international presence of the UN and, consequently, of EU, will be ensured” (Itar-Tass, Dec. 10, 2007).

Germany and the EU are making plans to cement their control of Kosovo via the UN and NATO! The EU is assembling an 1,800-strong police and judiciary mission to deploy if the UN requests it. A 17,000-strong nato-led international force is already on the ground in Kosovo, operating under the UN, which has run Kosovo ever since Serbian troops were forced out by the 1999 nato bombing campaign.

In 1991, both Germany and Europe as a whole were significantly weaker, less unified and less defined than they are today. Germany was a newly united, largely inward-focused state in the early stages of resurrecting itself as the leader of Europe. Europe was much more amorphous than it appears today.

But these factors didn’t stop a major newspaper from ringing alarm bells when Germany boldly announced it would support Croatia and Slovenia in their quest for independence, a decision many knew would set a dangerous precedent and likely cause Yugoslavia’s dissolution. At that time, even a mainstream news source analyzed the breakdown of Yugoslavia in the context of German ambition in the Balkans.

Today, we see few such pointed analyses in the news media. Germany and the EU are widely embraced as legitimate and influential global powers with a formidable economic, military and geopolitical imprint. Europe, with Germany as its vanguard, has become a respected and increasingly powerful geopolitical force motivated by lofty ambitions of becoming a united superpower.

The mainstream media refuse to analyze the Balkans in the context of what’s happening in Europe, and of Germany’s history with the region. This is the most dangerous and ominous angle of the story, and the most underreported one!

In time, this shameful ignorance will prove to be an expensive mistake.