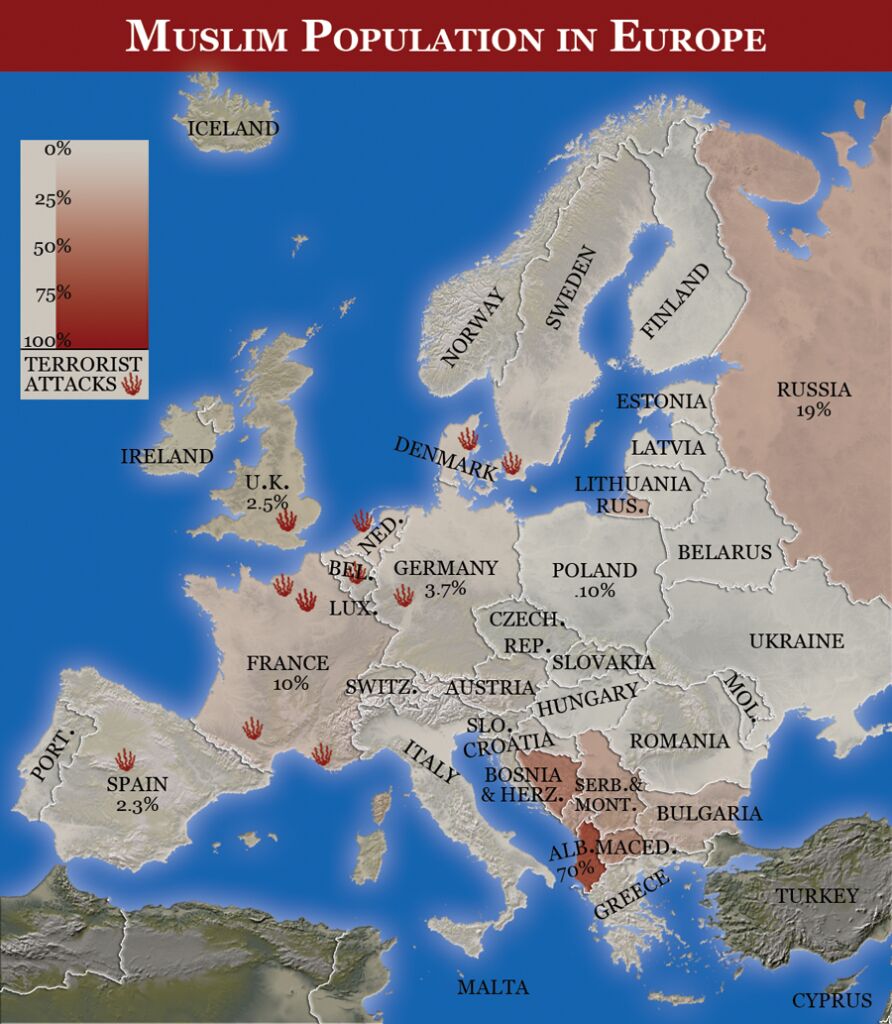 In A.D. 732, Muslim invaders and Christian soldiers collided in one of the most decisive battles in history. Why is this important? The same forces that made the Battle of Tours-Poitiers inevitable are at work today.

The fate of the world sometimes pivots on the smallest of circumstances. This was the case in a battle that occurred in October a.d. 732 about 200 miles south of Paris on a narrow road between the towns of Tours and Poitiers. The battle erupted when invading Muslim armies led by Rahman al-Ghafiqi streamed into France in an effort to conquer the French region of Aquitaine and were soundly stopped by Frankish General Charles Martel.

What happened on that small road turned the Muslim tide on the Continent. The Battle of Tours-Poitiers, wrote Victorian author John Henry Haaren, “decided that Christians, and not Muslims, should be the ruling power in Europe” (Famous Men of the Middle Ages). If the outcome of Poitiers were different, wrote Edward Gibbon in The Decline and Fall of the Roman Empire, perhaps “the interpretation of the Koran would now be taught in the schools of Oxford, and her pulpits might demonstrate to a circumcised people the sanctity and truth of the revelation of Mohammed.”

What happened in Poitiers was inevitable. Prior to 732 the Saracens, or Mohammedans, had conquered the southern shores of the Mediterranean and established Islam across the underbelly of Europe—from Palestine, Syria and Egypt, across North Africa to Morocco and, during the late 7th century under the Umayyad caliphate, even into the southwestern extremities of mainland Europe.

But these campaigns were just the beginning, mere stepping stones toward the Muslims’ ultimate goal. The incursion into the land of the Franks through the Pyrenees was the penultimate task of Islam’s armies. In the middle of the 8th century, Muslim ambition—hot, focused, menacing, and with decades of momentum behind it—made a dash toward its ultimate goal: the conquest of Christian Europe.

Poitiers was pivotal because it stopped the Muslims’ northward advance into broader Europe. It was, as Gibbon wrote, “an encounter which would change the history of the whole world” (emphasis mine throughout).

Today, the history of the Battle of Tours-Poitiers has, for the most part, been buried under masses of revisionist, politically correct, multicultural gibberish. Muslim imperialism is a taboo subject ignored by nearly everybody for fear of being ostracized, prosecuted, stabbed or bombed—or worse, igniting a global wave of riots on the Muslim street. This spirit of appeasement and non-judgmentalism, and willing ignorance of history, is preventing Westerners from analyzing the true nature of the crisis posed by Muslim ambition.

Too few are prepared to consider the fundamental forces at play in the Muslim-related crises occurring in Europe, such as last week’s brutal riots in Paris; or the Danish cartoon crisis; or the multiple terrorist plots that have been foiled across Europe; or the emergence of sharia suburbs in European cities; or the anti-European, anti-Christian vitriol spewing from the mouths of Muslim preachers in Europe, even the moderate ones; or the network of Islamic radicals stretching from Bosnia to Britain, Spain to Germany; or the rapid construction of hundreds of minarets across the European skyline, indicative of a swelling Muslim tide.

Troubles plague the relationship between European Muslims and their host nations, but few Europeans comprehend the magnitude of the crisis because they fail to look to history. This is alarming because the forces that made the Battle of Tours-Poitiers inevitable have been resurrected. The major difference is that today those forces run deeper and more intensely than they did in a.d.732!

The same ideology and religious motivations that underpinned Arab imperialism in a.d. 732 are again flourishing. Islam and its doctrines are thriving globally: It is one of the fastest-growing religions in the world, including in many Western states; individual Islamic movements, even radical ones, have gained massive momentum. Muslim leaders and followers, including many of the so-called moderates, freely and regularly call for the destruction of Western civilization and the construction of a global Islamic caliphate.

Last April, as the French went to the polls to elect a new president, Islamic forums buzzed with discussion about re-invading France, and one mentioned reliving the Battle of Tours-Poitiers. One user on the al-Firdaws jihadi forum reminisced about the Muslim commander at that battle: “We ask that Allah sends us a genuine Rahman al-Ghafiqi, to finish what he started in Europe, and conquer the Vatican as promised in our beautiful Islamic verses,” he wrote.

For Westerners, the Battle of Tours-Poitiers is buried 6 feet under; but it’s at the forefront of the jihadi imagination. Globally, Muslims, and not just the radical ones, are dreaming about the spirit of Poitiers, purging Europe of Christianity. In 2006, Steven Stalinsky, in an article in the New York Sun, listed an assortment of quotes from Muslim leaders calling for the conquest of Western states.

Libyan leader Colonel Muammar Qadhafi, a prominent figure in the Islamic world and a current darling of Western leaders, said only last year, “We have 50 million Muslims in Europe. There are signs that Allah will grant Islam victory in Europe—without swords, without guns, without conquests … [they will] turn it into a Muslim continent within a few decades.”

Qadhafi didn’t highlight the demographic rise of Islam in Europe as well as Iraqi Islamist Mullah Krekar, who during an interview with the Norwegian daily Dagbladet said, “Look at the development of the population in Europe, where the number of Muslims increases like mosquitoes. … By 2050, 30 percent of the European population will be Muslim,” he said.

Columnist Mark Steyn in his book America Alone recognizes what Qadhafi and other Muslims see: that a gargantuan demographic transformation is unfolding within industrialized nations, and none more so than on the continent of Europe. Rocketing birthrates among European Muslims and plummeting birthrates among native Europeans, argues Steyn, are at the foundation of the inherent rift between the two groups in Europe:

The demographic assault of Muslims on Europe makes the forces at play today worse for Europe than those at the time of Poitiers: In a.d.732 Muslims lacked a meaningful presence in the heart of Europe, which meant they had little demographic and military infrastructure to draw upon during their northward incursion.

Today, the armies of Islam can count on support, or at least sympathy, from millions of devoted, disgruntled and alienated Muslims across the Continent! Virtually every European state now has a healthy number of Muslims living within its borders, many concentrated in certain suburbs. Some areas in France, Britain, Germany and the Netherlands use sharia law as an alternative to national law.

“In smoky coffeehouses in Rotterdam and Copenhagen, makeshift prayer halls in Hamburg and Brussels, Islamic bookstalls in Birmingham and ‘Londonistan,’ and the prisons of Madrid, Milan and Marseilles, immigrants or their descendants are volunteering for jihad against the West,” wrote Robert Leiken in Foreign Affairs.

The lesson from the riots in France, the Danish cartoon crisis, the murder of Theo van Gogh, the multiple foiled terrorist attacks, the rapid construction of minarets on the European skyline, is painfully evident: European Muslims have not integrated into European culture and society; they exist as a separate, opposing force within their host nation.

It’s just as Theodore Dalrymple stated in a City Journal piece: “[T]he sweet dream of universal cultural compatibility has been replaced … by the nightmare of permanent conflict.”

Islam’s sights are once again set on Europe!

The critical history of Poitiers is repeating itself. Conditions are similar, and the strategy employed by today’s Muslim leaders has barely altered from that employed by Muslim caliphs in the Dark Ages. The religious and ideological motivations are identical.

Even the geographic positioning for invasion is largely the same: Since World War i, the demise of British and European colonies in the Middle East and North Africa have left the soft underbelly of Europe vulnerable to Islamic invasion. Now radical Islam permeates the territory from Pakistan in the east to Morocco in the west, and the region is again being exploited as a launching pad into Europe!

One big difference is that Muslim invaders have more than the humble sword at their disposal: Today they have access to some of the most sinister and dangerous technology available to man. In addition, they have a host of Muslims inside the Continent to draw upon.

When I consider the riots that occurred in France last week, or the terrorist networks sprawled across Europe, or the multiple foiled terrorist attacks, or the Danish cartoon crisis, I don’t see small, isolated outbursts of Muslim angst. I see a broader, deeper trend emerging between two historic enemies: I see the armies of Islam, powerful and menacing, motivated and eager, ambitious and emboldened by their dominance of the underbelly of Europe, nagging, practically begging, for a conflict.

And so do a handful of others.

Charles Martel was the Frankish general responsible for halting the Muslim incursions into France. He was a courageous and fierce leader, a man with the vision to realize that unless he stopped Rahman al-Ghafiqi and his warriors, Europe’s future as a Christian continent was at risk. During the battle, Charles was a beacon of bravery, and it is said that this was where he was given the name Martel, a derivative of marteau, the French word for hammer.

After he pulverized the Saracens, Charles the Hammer was viewed throughout Europe as the king of the Franks and the champion of European Christianity. After he died, his legacy as the protector of Christianity grew as his progeny picked up the mantle and advanced his achievements and conquests.

Even today, many of Europe’s prominent leaders and citizens admire, respect and seek to pattern European unification after Charlemagne, the powerful, ruthless emperor of the Holy Roman Empire—and grandson of Charles the Hammer.

Soon, a modern-day Charles the Hammer will emerge in Europe, and history will repeat. With radical Islam posing a massive threat, begging for conflict, this powerful leader, in conjunction with the Vatican, will resurrect the spirit that empowered Charles Martel at the Battle of Tours-Poitiers.

In a.d.732, the fate of the world pivoted on a single battle waged on a small road about 200 miles south of Paris. Today we are re-living the Battle of Tours-Poitiers—and once again, it will prove be one of the most decisive battles in history!