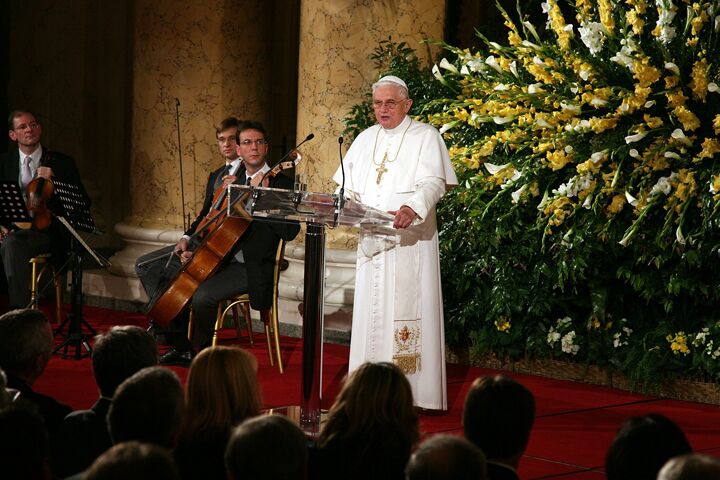 Benedict XVI continues his mission to transform Europe into a more Catholic continent than ever.

Pope Benedict xvi has concluded a three-day trip to Austria, where he spoke before Austria’s president, parliament and diplomatic corps. The Catholic leader addressed the assembly of leaders in the Hofburg Palace in Vienna.

Benedict xvi addressed a large slice of world politics, focusing on Europe’s global role and the importance of bolstering the bloc’s influence.

“The ‘European home,’ as we readily refer to the community of this continent, will be a good place to live for everyone only if it is built on a solid cultural and moral foundation of common values drawn from our history and our traditions,” he said, according to a Zenit.org transcript.

“Europe cannot and must not deny her Christian roots,” he said.

The pope also called for Europe to shoulder greater responsibility in the world, using its “intellectual tradition, its extraordinary resources and its great economic power” to fight poverty and promote peace.

Benedict added that European countries were “among those making the greatest contribution to international development, but they also need to make their political importance felt” in geopolitical issues such as Africa and the Middle East.

In his conclusion, the pope added, “Much of what Austria is and possesses, it owes to the Christian faith and its beneficial effects on individual men and women. … An Austria without a vibrant Christian faith would no longer be Austria.”

Benedict and the Catholic Church’s statements regarding the EU constitution indicate that the Vatican feels the same way about Europe in general: It will either be a Europe with a vibrant Catholic religion, or no Europe at all. Since the latter will never do, look for the secular continent to find its Catholic roots again and for the pope to exert an increasing amount of leverage. For more on the subject of Catholicism and Europe, read “Why the Pope Offends Muslims, Jews and Protestants” and Germany and the Holy Roman Empire.