The Founding Fathers didn’t establish a democracy, but a republic. 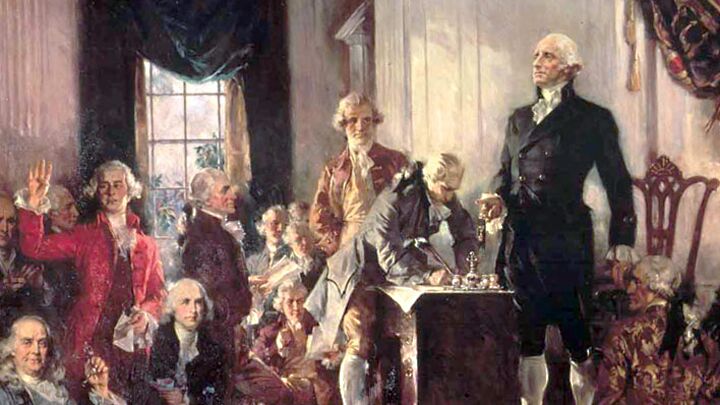 The Founding Fathers didn’t establish a democracy, but a republic.

Hillary Clinton, in one of her post-election speeches, promised to fight to abolish the electoral college. It is outmoded, she said, and should be phased out of our election system. Why is her proposal so dangerous to America?

To understand the electoral college, we must first understand the governmental system under which we live. Although we often use the terms democracy and republic as if they were the same, they are not. Yes, both systems give governing power to elected representatives, but in a republic those officials are expected to act on their own best judgment concerning the needs and interests of the country. Direct democratic rule, on the other hand, insists on the will of the people being realized whether that will is for the good or the destruction of the nation. Today we refer to that rule as partisan politics.

British professor Alexander Fraser Tyler wrote, “A democracy cannot exist as a permanent form of government. It can exist only until the voters discover they can vote themselves largess (defined as a liberal gift) out of the public treasury. From that moment on, the majority always votes for the candidate promising the most benefits from the public treasury, with the result that democracy always collapses over a loose fiscal policy, always to be followed by a dictatorship” (J.S. Mill, On Liberty).

Direct democratic rule was understood by the Founding Fathers to be historically destructive. James Madison wrote, “Democracies have ever been spectacles of turbulence and contention; have ever been found incompatible with personal security or the rights of property; and have in general been as short in their lives as they have been violent in their deaths” (The Federalist, no. 10).

What did he mean? Rule by simple majority creates the real danger of disenfranchising the rights of the minority. In the beginning, the founders studied the history of ancient governments. They made clear their sound reasons for preferring a republic: Nothing else could better safeguard the people’s liberties. These were exceptionally astute men who believed in the sovereign rule of God. They gave Him credit for their blessings and generally tried to submit to His laws. There are none on our political scene today to equal them!

The shame of election 2000 was acted out before the whole world—the shame of partisan politics. Everyone was able to see exactly what the founders tried so diligently to prevent. Partisan politics favor only a segment of the people, not all the people. And that’s the point of the electoral college.

The electoral system was devised by the drafters of the U.S. Constitution, who intended that their choice would be unaffected by partisan politics. In Article ii, Section 1, of the Constitution, the method of selecting electors is delegated to the separate state legislatures, and the voting procedure to be followed by the electors is carefully defined. Under the electoral college provision, when U.S. citizens vote, they are not voting for the person running for office. They are actually voting for a particular group of electors, who then cast the only binding ballots of the election.

Why is this better than relying on the popular vote only? As election 2000 demonstrated, some states have considerably less population than others. Obviously, a simple majority vote would routinely disenfranchise those minority states. But the electoral college system allows people to vote through their state, slightly favoring less populated areas. It may seem an unimportant distinction (and there are differing viewpoints), but the founders knew it was as good as they could get in a human system.

Under the popular vote system, would the votes of a low-population state like Wyoming ever count? No! Wyoming voters would always be steamrolled—while the majorities of heavily populated areas (Senator Clinton’s New York, for example) would always control the presidency. Do the politicians of our day understand this? Of course they do—it’s their business.

James Madison wrote, “In all cases where a majority are united by a common interest or passion, the rights of the minority are in danger!” John Adams agreed: “Unbridled passions produce the same effects, whether in a king, nobility, or a mob. The experience of all mankind has proved the prevalence of a disposition to use power wantonly. It is therefore as necessary to defend an individual against the majority [in a democracy] as against the king in a monarchy….”

The issue is far bigger than just “counting every vote.” The founders saw that when a minority is ignored, they soon realize that their votes don’t count. That realization begins to bring the destruction that has happened to every democracy in history: rebellion against governmental tyranny. What would the final outcome of such a venture be? A house hopelessly divided against itself.

Why, then, do many politicians keep trying to remove the electoral college—a safeguard against mob rule—and replace it with the “concept” of democracy—count every vote? Perhaps they don’t like the limits on the powers that have been granted them by state and federal constitutions. Maybe they know that if they control several key states—major population centers (California and New York, for example)—they can rob every election from the minority states and take control of the nation. That is what has happened to every democracy in history! Whatever the reason, such government will surely be self-serving—that’s the way mankind is unless we submit to and are governed first by the laws of God!

Given recent events, it is easy to see how a democracy can turn into anarchy when self-serving individuals wish to manipulate it.