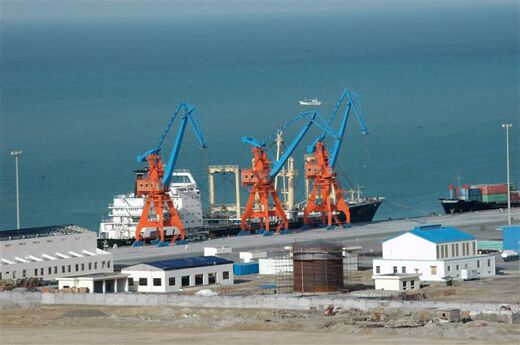 China has invested over a billion dollars into this strategic Pakistani port. What does it hope to gain?

The Chinese financed Pakistani port of Gwadar officially opened for business on March 20. This former fishing village turned strategic port-complex is set to become both a commercial and industrial center as well as a massive shipping hub. Its key geographic positioning will make it a jewel for its new Chinese investors. China has positioned itself to control another vital sea gate trade route.

“I stand where there was nothing except sand and dust when I came five, six years ago,” said Pakistani President Pervez Musharraf as he formally inaugurated the country’s new deep-sea port. “It is the friendship between China and Pakistan that has made my dream of Gwadar come true. It is this, the Chinese relationship with us, their spirit of assisting Pakistan, which has made this dream a reality. We thank you. We thank China.”

As President Musharraf stated, Pakistan does have much to thank China for. As the primary developer, China has spent more than a billion dollars in construction and has indicated its desire to spend multiple billions more on other future developments (menafn.com, Nov. 20, 2006). Once complete, the port is intended to have road and rail links to Afghanistan, several Central Asian states, western China and northern India. China is also to construct a 60,000-barrel-per-day oil refinery, power plants, and an international airport, while the Port Singapore Authority International plans to build a desalination plant and cold storage facilities. Talks are also underway to develop a coal mine and rehabilitate a local copper-gold deposit. Several oil and gas pipelines radiating from Gwadar to China, Central Asia, India and Iran are also proposed. The completed center could feasibly rival Singapore, Hong Kong and Dubai, says the Business Recorder.

So why is China spending so much money in Gwadar?

The first reason is economic. Gwadar will act as a gate opening western China to the rest of the world. For centers in western China, the country’s east coast is more than twice the distance away. Additionally, China is sure to benefit from the estimated $60 billion in annual trade that the port will generate. Also, as future supplies of oil and gas from the Middle East reach China overland via Gwadar, thousands of miles of easily interruptible and more expensive ocean transport will thereby be eliminated.

The second and probably more important reason is Gwadar’s strategic value. The port of Gwadar is located on the southwestern coast of Pakistan, close to the Strait of Hormuz, an oil transit choke-point through which more than 13 million barrels of oil passes each day. Reports indicate that China will be allowed to use Gwadar to dock its navy.

Thus, China, by having a controlling interest in Gwadar, is achieving two critical objectives: On one hand it is establishing a base from which its navy can guarantee the security of its oil as it comes through the Strait of Hormuz. On the other, it is increasing its navy’s sphere of influence. Gwadar will serve as a base from which China can patrol the high seas—specifically the Indian Ocean and the Arabian Sea. The Chinese Navy will be on the doorstep of the Middle East!

Chinese naval penetration of the Indian Ocean and Arabian Sea has caused concern in Washington, New Delhi and Tokyo. Authorities are concerned that China will now have a proximal base of operations for its navy, which would greatly increase its capability to project both military and political influence in the region. In the case of any conflict, this would increase China’s ability to obstruct oil transport sea lanes. Some analysts are even calling Gwadar the “Chinese Gibraltar,” likening it to the British-owned sea gate that controls maritime trade and movement between the Atlantic Ocean and Mediterranean Sea (Gibraltar is also arguably one of the top two or three strategic sea gates in the world).

China has taken control of some of the most critical seaports around the globe. Chinese government or private companies own or partially own ports in Europe, Asia, Latin America, South America and even Africa.

Reports indicate that Japan and India are concerned about growing Chinese influence in Gwadar and elsewhere. However, soon their concerns won’t matter. Relations between these two nations and China are elsewhere showing real signs of improvement and are bound to get even better in the future. Bible prophecy shows that Japan, India and China will be three of the nations that comprise a great Eastern alliance. Russia and China in Prophecy will help you prove these facts for yourself.

It’s a different story for America, however. China’s naval presence is growing and has become a serious concern for the United States. U.S. influence over and ability to control global trade and shipping is quickly eroding. Even the U.S.-built Panama Canal—probably the most strategic sea gate in the world—is long gone from U.S. control, just as the Bible prophesied would happen.