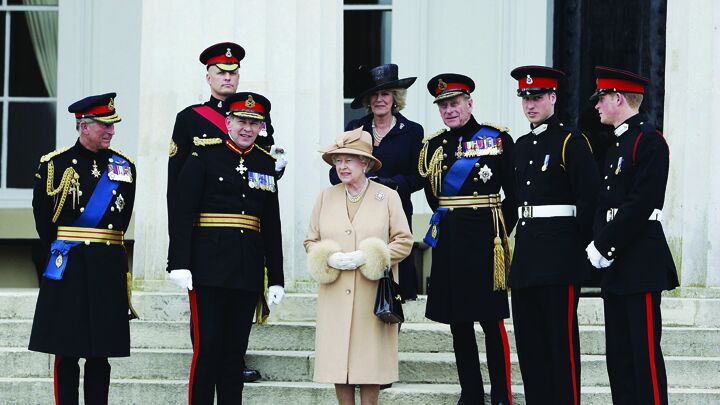 History records that the monarchy has been the backbone of Britain, the unfailing institution on which all other elements of national power and character have depended. The monarchy was at the vanguard of Britain’s march to unmatched global wealth and influence during the 18th and 19th centuries. British royals revolutionized international politics and law. Much of the world—from America to Australia, India to South Africa—has at one time or another been branded with the mark of the British royal family.

Be it King John and the Magna Carta, Henry viii and the Act of Supremacy, or William of Orange and the Bill of Rights, the British monarchy has been at the vanguard of Britain’s (and the world’s) judicial and political evolution. The Magna Carta, a revolutionary legal charter signed and sanctioned by England’s King John in 1215 to provide a framework for relations between king and country, has inspired nearly all modern democracies and their constitutions, including America’s Declaration of Independence.

Whether they were bold military geniuses saving England from death or fortresses of inspiration for a depressed nation, the royals have played a critical role in every major military conflict Britain has entered. During the Hundred Years’ War, King Henry v’s displayed military genius and courageous leadership in the decisive battle of Agincourt.

Never has one family been such a steady river of character, honor, bravery and faith in trial. After George vi, England’s king during World War ii, died in 1952, Winston Churchill saluted his upstanding character and profound leadership. When at the outbreak of war King George was encouraged to flee Hitler’s wrath by escaping to Canada, he refused, choosing instead to remain in London. Together with Churchill, he became a bulwark of faith and encouragement to the nation throughout the war. The day after King George vi died, Churchill praised his old friend in a moving remembrance speech. The king’s dignified and courageous conduct, said Churchill, “may well be a model and a guide to constitutional sovereigns throughout the world today and also in future generations.”

History defies the people today who pass the monarchy tas an entertaining fest of celebrity shenanigans.

The legacy of Elizabeth i, daughter of Henry viii, could hardly be more outstanding. The mother of the Elizabethan Age (17th century) of England, she possessed adroit political skills and strong personal character that helped put England on the path to becoming a global economic and political power. She was the last of the influential Tudor dynasty, and by confronting Roman Catholic influence in England, she stoked English nationalism (associated closely with the Protestant movement) and became, as the Encyclopedia Britannica labeled her, “the glittering symbol of the nation’s destiny.”

Elizabeth i was a product of her grandiloquent father, Henry viii. As the fire that was the Protestant Reformation stormed Europe in the 16th century, Henry viii unshackled England from Catholicism and secured the place of the Protestant (later called Anglican) Church in England. In 1534, the English Parliament recognized Henry viii as head of the Church of England—a responsibility still invested in kings and queens today. Beyond his role in securing the future of the Church of England, Henry “gave his nation what it wanted: a visible symbol of its nationhood” (ibid.; emphasis mine throughout).

Of all the feats and splendor of Britain’s monarchs, none match the accomplishments of Queen Victoria, Britain’s longest-ruling monarch. As queen of Great Britain and Ireland and the empress of India, Victoria sat on the throne at the height of Britain’s global achievements. She was queen of more than a nation; she ruled a staggeringly expansive, unspeakably wealthy empire. She spearheaded Britain’s transition from a medieval nation to the most modern industrial power on Earth.

People today wince at public displays of patriotism, but Churchill gloried in Victorian England, a time when, as historian William Manchester wrote, “… Victorians responded quickly to calls of duty, the flag, the race, the white man’s burden; the lot” (The Last Lion). During the 19th century under Queen Victoria, as Churchill himself wrote in A History of the English-Speaking Peoples, “Sovereign had become the symbol of Empire.” Under Victoria, the royal crown became the glue binding the vast and diverse British Empire together.

Queen Victoria’s duty, honor and love for the people and for the British Empire stirred the loyalty of Englishmen. “High devotion to her royal task, domestic virtues, evident sincerity of nature, a piercing and sometimes disconcerting truthfulness—all of these qualities of the queen’s had long impressed themselves upon the minds of her subjects” (ibid.). Even politicians who opposed Victoria and her policies respected “the watchful sense of duty that always moved her.” By the time Queen Victoria died, “[A]ll reflecting men and women could appreciate the advance of British power and the progress of the British peoples that had taken place during the age to which she gave her name” (ibid.).

As the sun set on Churchill’s life and he saw liberal, anti-royalist politics seep into the British government, he found solace in the history of his nation under its greatest monarchs. He prized the place and function of the British monarchy. The depth of his love and devotion to the monarchy was evident in his remembrance speech for King George vi.

“There is no doubt that of all the institutions which have grown up among us over the centuries, or sprung into being in our lifetime, the constitutional monarchy is the most deeply founded and dearly cherished by the whole association of our peoples.” Quite an endorsement from this great statesman, perhaps the greatest we have ever seen.

Do you prize the monarchy today as Winston Churchill did?

The denigration of the royal family of England to little more than fodder for trivial tabloids is a monstrous tragedy.

In his biography on Queen Elizabeth ii, titled The Queen, historian Ben Pimlott remarked that Elizabeth’s coronation in 1953 “provided an opportunity to display a new kind of imperial greatness, by reaffirming the monarchy as the cord tying together the Empire and Commonwealth into a group of diplomatically, economically and even militarily associated nations.” Since that occasion, Britain and the world have rapidly lost understanding of the true meaning of the royal monarchy.

In June 1953, the National and English Review cited Herbert Agar saying, “Without the crown there can obviously be no Britain and no Commonwealth. … Without Britain and the Commonwealth, there can be no tolerable future.” This institution has been the heart that pumped life into Britain. History declares loudly that the success or failure of the throne of David, Britain’s bedrock institution, largely determines the success or failure of Britain.