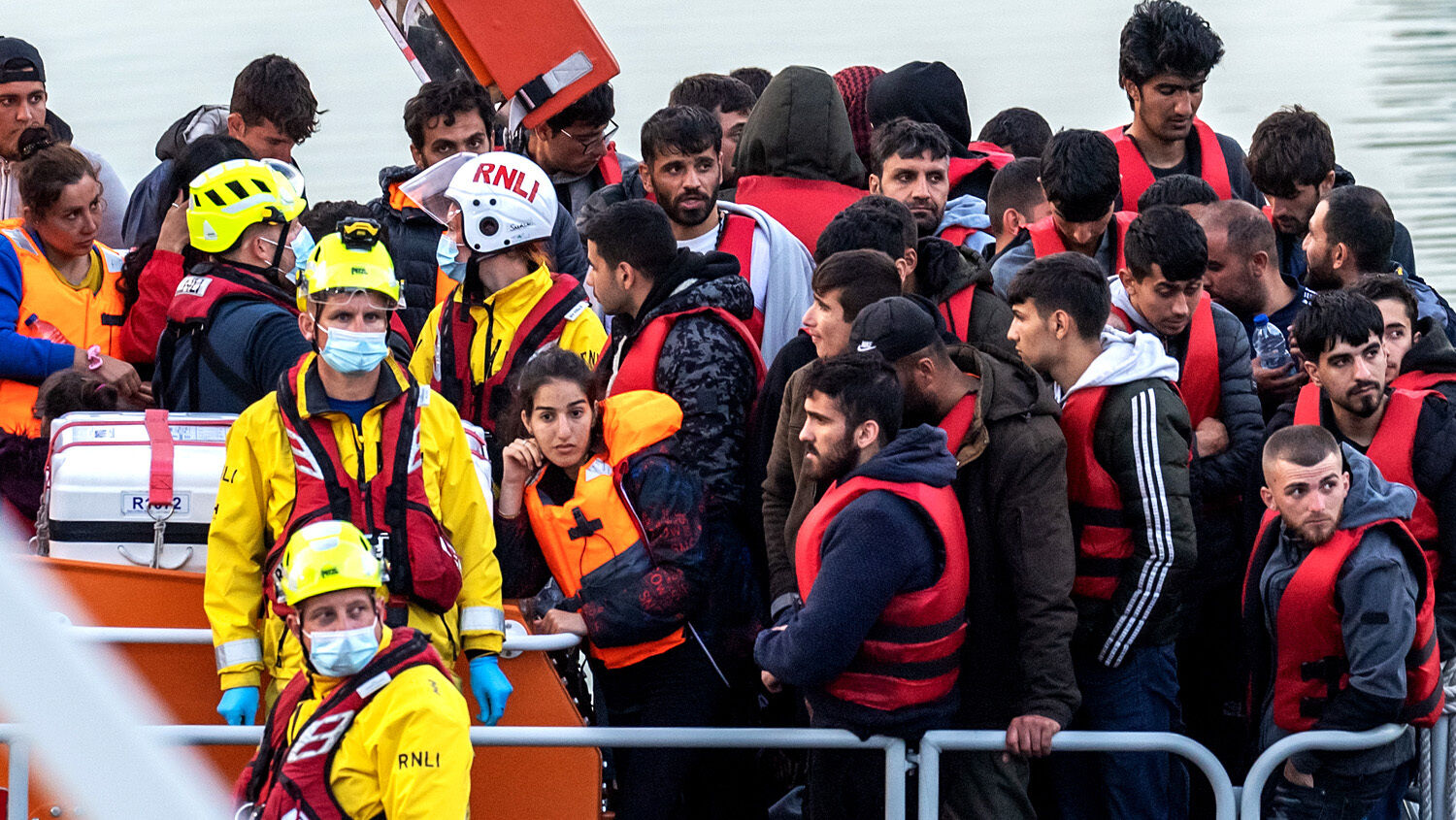 A lifeboat escorts migrants back to Dover on June 16 after they were picked up by English Channel Border Force officials.
Stuart Brock/Anadolu Agency via Getty Images

Britain has its own migrant crisis. Tens of thousands of immigrants are invading Britain’s southern coast, crossing the Channel in small boats from France.

The numbers are astounding. Between 1 and 2 percent of the entire adult population of Albania has arrived this way. That’s not an equivalent—it’s literal truth. Around 1 in 50 adult Albanians have recently climbed in a dinghy and set sail for England.

Ninety percent of these are men. These are clearly economic migrants, not women and children fleeing a war zone.

To house them, the government has rented out entire hotels—four-star holiday resorts in some cases. Now it is looking at changing tactics, booking them into rooms in hotels that still serve the public.

The government now spends £2 billion (us$2.3 billion) a year on its asylum system—double the spending from two years ago. That’s on top of the £2.5 billion (£6.8 million per day) hotel bill.

And that’s the direct financial costs. Many of the Albanians coming here work for gangs. Albania’s director of immigration police Saimir Boshnjaku said, “Those that make money from drugs come back here driving Maseratis and Mercedes, and they buy a big villa in the village.”

The government says that earlier Albanian gangs caused a significant boost in drug smuggling in the United Kingdom. The National Crime Agency said, “Albanian crime groups have established a high profile and degree of influence within UK organized crime, and have considerable access to the UK drug trafficking market, particularly cocaine.”

These gangs show off their wealth on social media and in rap videos. “Young men watch these videos and want to move to the UK to enjoy this wealth,” said Mohammed Veliu from Albania’s Top Channel tv. “They help attract more recruits for gang bosses.”

Naturally the subject has become a big deal in British politics—but not for the reason you’d expect.

What’s really been driving the news cycle is the push to demonize those who even discuss the issue. Home Secretary Suella Braverman called this an “invasion.” The bbc and the left tried to hound her from office.

On October 29, Andrew Leak petrol-bombed a migrant center before killing himself. The guy was clearly crazy and had a major problem with illegal drug use. But rather than look at this—an investigation that might lead us to examine foreign criminal gangs bringing drugs into the UK—the media is accusing anyone opposed to illegal immigration of inspiring future attackers.

This points to a real problem here—a crisis of leadership. Britain has a ruling class that consistently fails to deal with this and many other problems. It won’t even talk about them, and often pushes policies that hurt, rather than help.

It’s maddening to see so many problems that could be solved with strong leadership—but aren’t. But there is hope.

For years we’ve taught that the biblical tribe of Ephraim refers to Britain in Bible prophecy (read our free book The United States and Britain in Prophecy for more information).

The book of Hosea has a lot to say about modern Ephraim. In biblical language, it analyzes the causes of modern Britain’s dysfunction.

Chapter 5, for example, begins by addressing the “priests” and “house of the king”—the leaders of the nation. It says they have been a “snare” and “a net.” Our leaders are causing many of our problems. “God is putting the blame where it belongs,” writes Trumpet editor in chief Gerald Flurry in his booklet Hosea—Reaping the Whirlwind. “Who has led the nation of Britain astray? It has been the ministers, rulers and even the royal family. The leaders of the nation have been a snare to the people.”

Why doesn’t Britain produce strong leaders? Earlier chapters condemn the rampant immorality in the country. Family has collapsed—and without strong families and strong child rearing, there is no next generation of strong leaders. In fact, the consequences of the destruction of Britain’s families is so devastating, God likens it to child sacrifice (Hosea 4:13-14).

And the results of this weak leadership? “Ephraim, he hath mixed himself among the people,” or “foreigners,” as the New Living Translation terms it (Hosea 7:8). God prophesied that Britain would embrace mass migration.

A census result last week showed that 1 in 6 people living in England and Wales were born outside the UK. The pace of migration is accelerating. From 1981 to 1990, net migration to the UK was 445,000. In 2020 to 2021, 680,000 foreign-born migrants arrived in the UK. That’s more than the population of a large city showing up in a very short period of time.

And this massive change did not happen with the consent of voters; it’s been forced on them by their leadership. As the Spectator wrote last week: “From 2010 to today, the British public have voted to restrict immigration at every opportunity given to them.”

Hosea 7:8 continues, “… Ephraim is a cake not turned.” It may look good on the surface. But on the inside it’s been burned out and overcooked.

These are just tangible, measurable difficulties. But can a multicultural state pull together in crisis like Britain did in the blitz? Some would be quick to answer yes—but it’s never been tried. The Bible warns that when Britain needs strength and unity, it will suddenly be found missing: “Strangers have devoured his strength, and he knoweth it not: yea, gray hairs are here and there upon him, yet he knoweth not” (verse 9). We’re weak, and we don’t even realize it.

God shows that He knows all about our problems. But He also tells us how He will solve them.

In Hosea 8:7, God says, “For they have sown the wind, and they shall reap the whirlwind ….” God has a lesson for us about cause and effect. God is going to allow our foolish policies and sinful behavior to continue for a time. He will confront us with the consequences of our own actions.

In the end, “Ephraim shall receive shame, and Israel shall be ashamed of his own counsel” (Hosea 10:6).

Mr. Flurry writes: “Britain will soon become ashamed of its ‘craftsmen,’ or experts. Do you really want to rely upon the experts?” covid-19 has already given us a preview of where trust in such “experts” will lead.

“O Israel, thou has destroyed thyself,” God laments (Hosea 13:9). We cannot look to our leaders for lasting solutions. Our self-destructive policies will continue. But this description of our problems from Hosea also contains our only hope. “[I]n me is thine help,” God finishes the verse.

God is allowing us to cause problems that are worse than we realize—to turn Britain and all nations to Him. “I will heal their backsliding, I will love them freely: for mine anger is turned away from him,” God says. “I will be as the dew unto Israel: he shall grow as the lily, and cast forth his roots as Lebanon” (Hosea 14:4-5).

God is allowing us to experience the consequences of our actions for our own benefit.

For more on how God plans to correct and use Britain and America for the benefit of the whole world, read Herbert W. Armstrong’s book The United States and Britain in Prophecy.