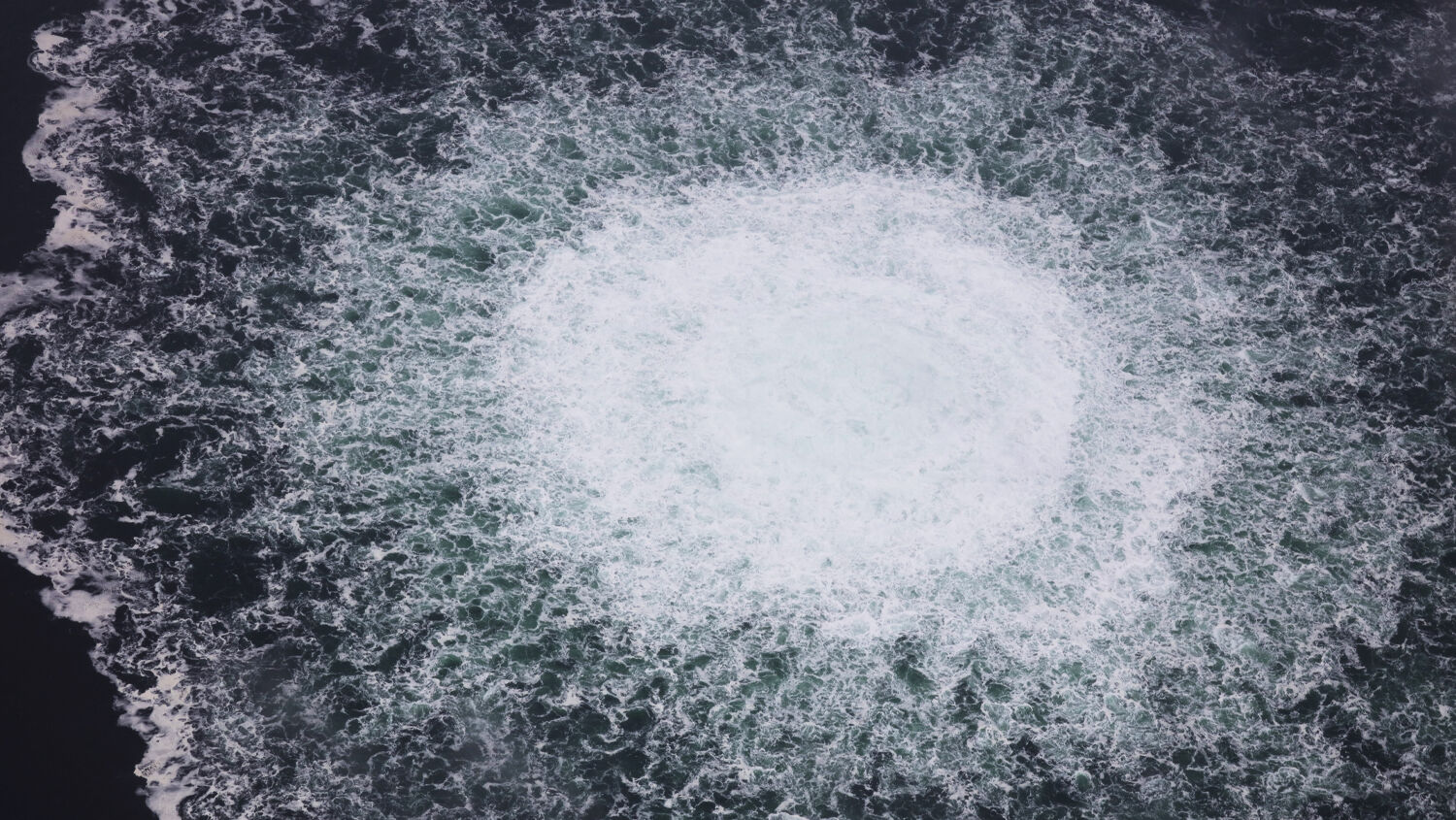 Undersea explosions expose how much Germany and Russia are linked.

Two powerful explosions tore apart the Nord Stream 1 and Nord Stream 2 natural gas pipelines last week, severely testing five decades of Russian-German energy policy. European Union energy prices have doubled since Russian President Vladimir Putin took Nord Stream 1 offline this summer, but now they are set to spike even higher. As Europe heads into winter, people are dimming the lights and switching off ovens because their natural gas supply is currently bubbling to the surface of the Baltic Sea. North Atlantic Treaty Organization officials are calling the explosion “deliberate, reckless and irresponsible acts of sabotage.” But it is still unclear who is responsible for them.

Various sources suggest it may have been Russia, Ukraine or even the United States—but no matter who carried out the attack, it certainly highlights how vulnerable Europe’s energy grid is. Targeted attacks on the energy sector have been increasing in recent years, but the Nord Stream attack takes things to a new level. These pipelines lie between 260 and 360 feet beneath the surface of the Baltic Sea and are protected by a cement casing. As risk analyst Peter Burgherr pointed out, only “state actors” have a realistic chance of destroying Nord Stream.

The Nord Stream attack is the type of incident that sparks wars. Former Central Intelligence Agency Director John Brennan thinks Russia is the most likely suspect behind the attack, arguing that Putin wants the explosion to be a signal to Europe that Russia can reach beyond Ukraine’s borders. Meanwhile, Putin is pushing the idea that “Anglo-Saxon” nations blew up the pipeline to hurt Russia’s economy. Other experts have even put forth the idea that Poland, Ukraine or one of the Baltic states may have blown up the pipeline in an attempt to sow division between Germany and Russia.

Regardless of who attacked the pipeline, as U.S. Secretary of State Antony Blinken told reporters, the sabotage is “a tremendous opportunity to once and for all remove the dependence on Russian energy and thus to take away from Vladimir Putin the weaponization of energy as a means of advancing his imperial designs.”

Back in March, the United States and European Union agreed to scale up American liquefied natural exports to Europe to 1,765 billion cubic feet per year starting in 2023. Many American energy officials undoubtedly hope that strain between Germany and Russia will expedite a European realignment to America.

Two weeks before Putin invaded Ukraine, Joe Biden told reporters that the U.S. had the power to stop a Russian invasion by ending the Nord Stream pipeline. Specifically, Biden said that if Russia invaded, “there will no longer be a Nord Stream 2. … We will bring an end to it.” Fox News host Tucker Carlson believes Biden may be responsible for the sabotage. “Notice how he phrased that,” Carlson said. “He didn’t say, ‘I will pause the delivery of gas from Russia to Germany.’ He said there won’t be a Nord Stream 2. We’ll put an end to it.” Carlson said that Blinken’s comments were basically an admission of responsibility.

Yet if Carlson is right, this plan might ultimately backfire on the Biden administration. Thirty-five percent of Europe’s Russian gas supply flows through Nord Stream. If Germany finds out that America was responsible for the sabotage and resulting energy shortages, German policymakers may pivot away from America and back to Russia out of spite. It’s hard to trust a geopolitical partner who blows up your pipelines behind your back.

Biden’s latest request for money to send to Ukraine could push U.S. spending on the war up to $70 billion—more than Russia’s entire 2021 defense budget. Yet that $70 billion does not guarantee a Ukrainian victory. If a cold winter pushes Germany and Russia back into each other’s arms, then Ukraine is doomed no matter how much Biden spends. Europe’s energy infrastructure is vulnerable, and Germany needs Russian assistance to protect it.

We still don’t know who blew up the pipeline, but my father, Trumpet editor in chief Gerald Flurry, predicted back in 2018 that the threat of energy cutoffs would be a powerful weapon in Putin’s arsenal. “Nord Stream and Nord Stream 2 are key components of Putin’s plan to tighten his grip on nations in Eastern Europe that used to be part of the Soviet Empire,” he wrote in “Germany and Russia’s Secret War Against America.” “Since these pipelines travel directly from Russia to Germany, they enable Putin to shut off gas supplies to nations in Eastern Europe—Ukraine, Poland—and the Baltic nations while keeping supplies flowing to Germany. This places a sharp edge on Putin’s energy weapon! To the former Soviet nations that he is determined to bring back under Russia’s power, he can say: Either obey Russia or suffer cold winters with no gas to heat your homes. This is why Eastern Europe tried to prevent Russia and Germany from building the first Nord Stream pipeline. They knew it would give Russia more leverage against them.“

Now the world is getting a hard look at just how bad things can get in Europe without Russian natural gas. As Europe moves into winter, expect Germany to start making some Machiavellian energy deals with Putin. Bible prophecy shows that Russia is going to attack the European Union, but only after an era of intense cooperation.

After King Nebuchadnezzar destroyed Solomon’s temple, the Prophet Jeremiah was forced to flee to Egypt with a small remnant of Jews. From Tahpanhes he prophesied against Babylon: “Set ye up a standard in the land, blow the trumpet among the nations, prepare the nations against her, call together against her the kingdoms of Ararat, Minni, and Ashchenaz; appoint a captain against her; cause the horses to come up as the rough caterpillers. Prepare against her the nations with the kings of the Medes, the captains thereof, and all the rulers thereof, and all the land of his dominion. And the land shall tremble and sorrow: for every purpose of the Lord shall be performed against Babylon, to make the land of Babylon a desolation without an inhabitant” (Jeremiah 51:27-29).

This prophecy was partially fulfilled over 40 years later, when the kings of the Medes conquered Babylon. But in a 1980 World Tomorrow broadcast, the late Herbert W. Armstrong explained that there is an end-time fulfillment to Jeremiah’s words. He noted that just as prophetic Babylon refers to the modern-day European Union, so prophetic Media refers to the nations that once comprised the Soviet Union. And just as ancient Babylon was eventually overrun by ancient Media, the modern-day EU will eventually be overrun by Russia. Yet this will not happen until after the EU conquers the Israelite nations (America, Britain and the Jewish nation in the Middle East).

Anciently, King Nebuchadnezzar married the daughter of King Cyaxares of Media so he would not have to worry about the Medes attacking while he conquered Egypt, Judah, Tyre and other nations. So, it is likely that the leaders of the modern-day European Union will make a similar arrangement with Russia. Both Germany and Russia have aspirations to replace the United States as the world’s premier superpower, but to do so Germany needs Russian natural resources and Russia needs German technology. So despite the Ukraine War and the Nord Stream attack, Germany and Russia will likely keep their alliance of convenience in place awhile longer.

The German-led euroforce is prophesied to turn against the West and catapult the whole world into nuclear war before Jeremiah’s prophecy about the kings of Ararat, Ashchenaz, Media and Minni comes to pass. And the attack on the Nord Stream pipeline will hasten all of these developments. Over the past two centuries, every time Germany has double-crossed the West, it has first entered a nonaggression pact with Russia in order to shore up its defenses to the east. Watch for such a pact. It will not be a sign of peace, but a precursor to war!