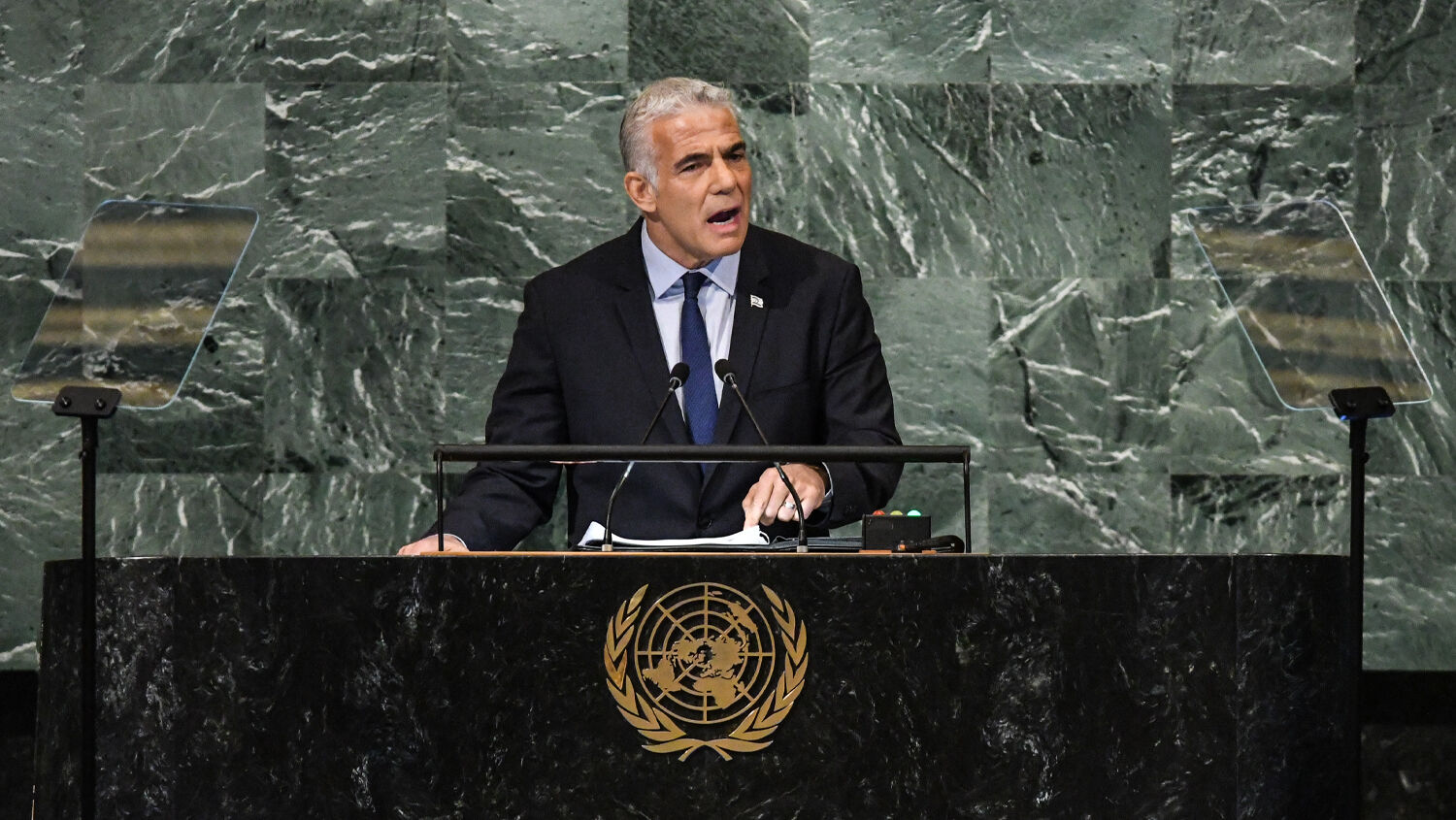 How did he do?

Israeli Prime Minister Yair Lapid gave his first speech to the United Nations General Assembly on September 22 and it was controversial. It all started the day before when Lapid’s team foreshadowed the content of his speech. By the end of his speech the following day, the floodgates were thrown wide open. The speech was vehemently condemned by his political opponents and even some of his allies.

What did Lapid say that caused such an uproar? With Israel’s November elections so close, are the condemnations just political theater or were they warranted?

There was a lot to like about Lapid’s speech. In it, he identified two of Israel’s greatest threats: Iran and the Palestinian question. Although Lapid is on the political left, his analysis was far more clear and grounded in reality than what you might expect from the left. The uproar wasn’t about his ability to identify the problems Israel faces, it was one of the solutions he proposed.

Iran: A Regime of Hate

The first problem Yair Lapid addressed was a nuclear-armed Iran. As Lapid noted, this is a grave threat not only to Israel but also to the rest of the world. And he went further than simply pointing the finger in Iran’s direction; Lapid got very close to the reason why Iran is such a threat. He said:

This is a regime that systematically deals with hatred.

They even hate their own people. Young Iranians are suffering and struggling from the shackles of Iran’s regime, and the world is silent. They cry for help on social media. They pay for their desire to live a life of freedom—with their lives.

Iran’s regime hates Jews, hates women, hates gay people, hates the West. They hate and kill Muslims who think differently, like Salman Rushdie and Mahsa Amini. Their hate is a way of life. It is a way to preserve their oppressive rule.

There is only one member state in the UN that openly states its wish to destroy another member state. Iran has declared time and time again that it is interested in the “total destruction” of the State of Israel.

If the Iranian regime gets a nuclear weapon, they will use it.

You have to give Lapid credit, very few are willing to call out evil this directly anymore.

So what was his solution? “The only way to prevent Iran from getting a nuclear weapon is to put a credible military threat on the table. And then—and only then—to negotiate a longer and stronger deal with them. “

This portion of Lapid’s speech was very well received overall and was not the source of the controversy. But it is worth taking a moment to look at the solution he proposed.

His solution to Iran is a perfect example of the fundamental problem with the secular West’s liberal worldview. It “assumes the essential goodness and infinite malleability of human nature,” wrote the late international relations expert Prof. Hans J. Morgenthau in his book Politics Among Nations. Liberals blame the lack of world peace on a “lack of knowledge and understanding” and “obsolescent social institutions, [and] it trusts in education, reform and the sporadic use of force to remedy these defects.”

One of those “obsolescent social institutions” liberals all but ignore is religion. As British journalist Melanie Phillips writes, “So why does the West ignore the Islamic religious roots common to both the war against Israel and the war against the West? It’s principally because the West seeks to explain everything in terms of reason, in which it believes religion can have no place.”

Negotiations with Iran will never bring about peace because the Iranian regime believes in a radical religion that does not want peace. But Western politicians don’t see the danger posed by Iran’s radical religious regime. This is why they keep trying to negotiate.

Now we come to the second major threat Yair Lapid identified in his speech: the Palestinian question. This was the part that ignited the flood of condemnation.

Israel’s economic and military strength allows us to protect ourselves but it also allows us something else: to strive for peace with the entire Arab world and with our closest neighbors—the Palestinians. An agreement with the Palestinians, based on two states for two peoples, is the right thing for Israel’s security, for Israel’s economy and for the future of our children.

Despite all the obstacles, still today a large majority of Israelis support the vision of this two-state solution. I am one of them.

Support for a two-state solution is nothing new at the United Nations or in Israel. So why was this so controversial?

First, many believe a two-state solution is no longer necessary. Up until recently, peace with Israel’s Arab neighbors was almost contingent upon Israel finding a solution to the Palestinian problem. The Abraham Accords signed in 2020 cut out the Palestinian middleman. It opened the door for Israel to pursue peace with its Arab neighbors, thus making a two-state solution unnecessary.

Second, Lapid is Israel’s interim prime minister until the elections in November. Because of this, his opponents believe he does not have the right to make such statements. As his own interior minister, Ayelet Shaked, said, “Lapid does not have public legitimacy to complicate Israel with comments that will harm the country.”

Fourth and most importantly, giving land for peace has not worked. The Palestinians are ruled by groups that do not want peace.

“[W]ho are we talking about when we talk about Palestinians?” asked former Israeli Prime Minister Naftali Bennett. “About the Hamas terror organization, which is supported by the majority of Palestinians? About the Islamic Jihad? Or about [Palestinian Authority leader Mahmoud] Abbas, who in his free time denies the Holocaust and pays murderers?”

Even Lapid recognized in his speech that for a two-state solution to work, the Palestinians must want peace:

We have only one condition: That a future Palestinian state will be a peaceful one. That it will not become another terror base from which to threaten the well-being and the very existence of Israel. That we will have the ability to protect the security of all the citizens of Israel at all times.

If someone believes that demand is too much, then look at the neighborhood in which we live. … Look at Gaza. Israel did everything the world asked of us, including from this very stage. We left. Seventeen years ago we dismantled the settlements, took apart our military bases. There is not a single Israeli soldier in Gaza. We even left them 3,000 green houses so they could start to build an economy for themselves.

What did they do in response? In less than a year, Hamas, a murderous terror organization, came to power. They destroyed the greenhouses and replaced them with terrorist training camps and rocket launch sites. Since we left Gaza, over 20,000 rockets and missiles have been fired at Israel. All of them at civilians. All of them at our children.

The two-state solution has already been tried. The end result is the Gaza we see today.

Like with Iran, liberal Western elites do not see the core problem. They don’t see that these Palestinian groups are governed by their radical religious beliefs. They are fundamentally and zealously opposed to the very existence of Israel. No matter how much you give them, it will never be enough and they will never be peaceful.

The Real Solution To Israel’s Problems

The problems Yair Lapid talked about at the UN are existential threats Israel has faced for decades. Yet the nation is no closer to solving them today. Why have Israel’s leaders failed to bring about real lasting peace? Why have world leaders failed to bring about world peace since World War ii? Mankind has been pursuing world peace for its entire history, yet we’ve only experienced war and strife. As Winston Churchill observed, “The story of the human race is war.”

What is the solution to war? Is there a way to world peace? Yes, there is! And it can be found sitting right in front of the United Nations building in New York.

The inspiration for this sculpture comes from the book of Isaiah. “And he shall judge among the nations, and shall rebuke many people: and they shall beat their swords into plowshares, and their spears into pruninghooks: nation shall not lift up sword against nation, neither shall they learn war any more” (Isaiah 2:4).

This passage is describing a time of real, lasting world peace brought on by the return of Jesus Christ. As the late educator Herbert W. Armstrong wrote in his book Mystery of the Ages, “What glory! A new day shall have dawned. Peace shall soon come. Men shall turn from the way of ‘get’ to the way of ‘give’—God’s way of love. A new civilization shall now grip the Earth. … Think of it! No more wars. No fear of man or beast. World peace at last.”

To learn more about the one and only way to world peace, please order your free copy of Mystery of the Ages.