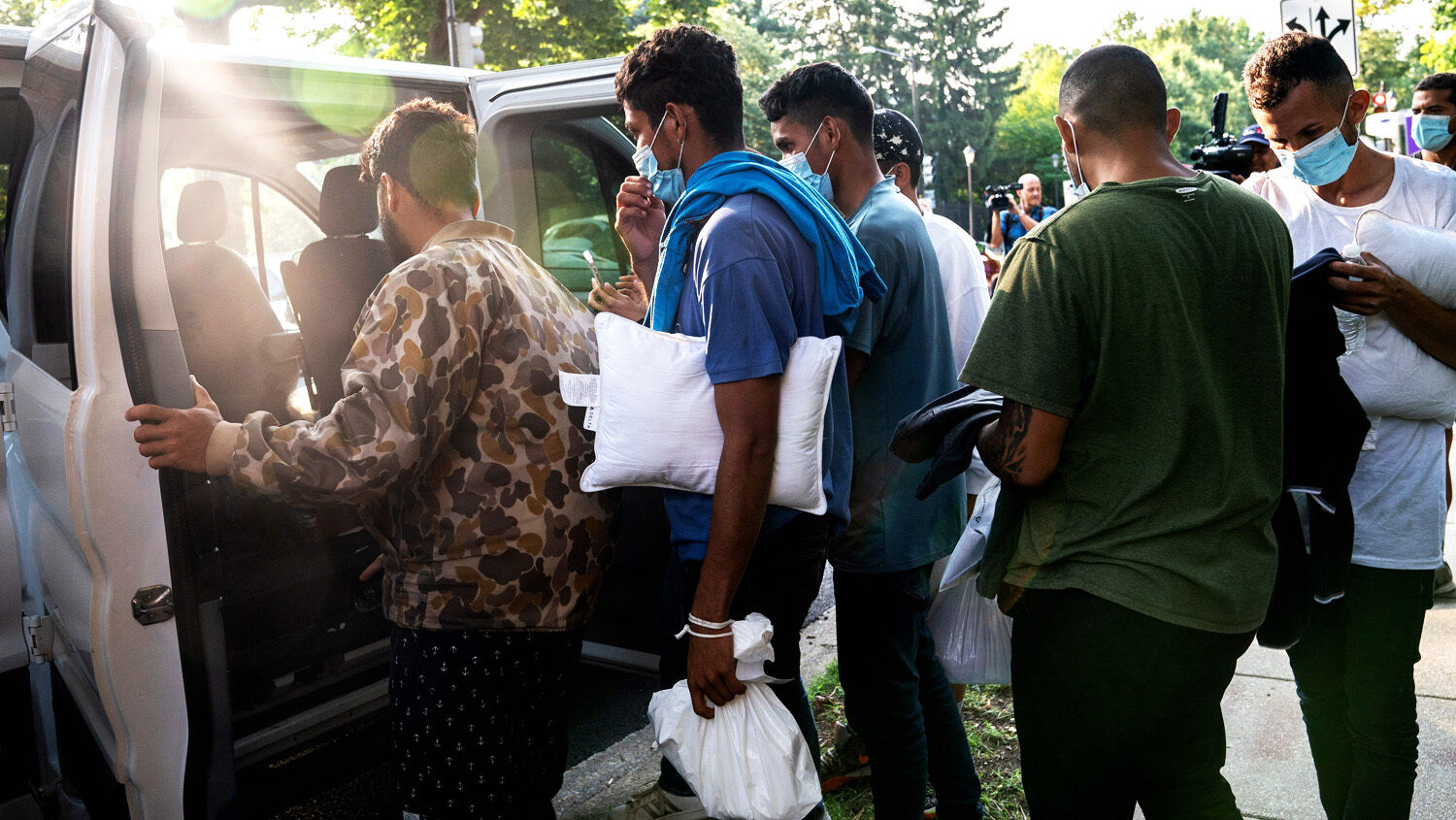 Migrants from Venezuela wait to be transported to a local church after being dropped off outside the residence of U.S. Vice President Kamala Harris in Washington, D.C., on September 15
STEFANI REYNOLDS/AFP via Getty Images

Martha’s Vineyard is an idyllic island retreat off the Massachusetts coast. It is a place of beautiful coastal scenery, pleasant temperatures and the (summer) homes of ultra-elite, ultra-powerful, ultra-affluent liberals who define people by their “socioeconomic status” and their skin color. This was also the place where 50 immigrant “brown lives” arrived on Wednesday, increasing the “ethnic diversity” of this super-rich and predominantly white liberal enclave.

They were deported in less than 48 hours.

The arrival of these Venezuelan immigrants on Martha’s Vineyard was arranged by Gov. Ron DeSantis of Florida, which has an estimated 772,000 illegal immigrants, by chartering a flight for them from Texas, which has an estimated 1,739,000. Massachusetts has more than twice as many liberal voters as conservatives and is a “sanctuary state” for illegal immigrants. Florida and Texas are not.

None is more prominent or in a more hypocritical predicament than the former—and current—boss of Joe Biden. More than anyone else, he has forced the border open and attracted millions of impoverished immigrants to flood into border towns in Texas and well beyond.

In addition to his $8 million, nine-bedroom mansion in Washington, D.C., and possibly another home in Chicago and another finishing up construction in Hawaii, Barack Obama personally owns a $12 million, seven-bedroom summer home on Martha’s Vineyard on a massive 29-acre shoreline estate. The man who stated that “welcoming immigrants to our shores is central to our way of life” has enough land, property and cash to care for 50 migrants personally. And he, like other Martha’s Vineyard elites, leaves his real estate unoccupied most of the year. Some have asked his representatives whether he would personally contribute the use of some of his real-estate portfolio to care for the immigrants that he is forcing on border towns and Americans in general. So far, he has been deafeningly silent.

Liberal media executives, meanwhile, have raged against DeSantis, flooding search results for “Martha’s Vineyard” and “immigrants” with stories focused on attacking and possibly prosecuting him. They are bending over backward to avoid writing the stories that would almost write themselves: If ultra-elite, white liberals are truly motivated to help illegal immigrants, why won’t they do so when they are dropped at their doorstep?

Welcome to America, where sending a few dozen migrants to a ritzy liberal holiday haven is evil, but leaving the border open for millions of illegals—many of whom die on the way or are trafficked once they arrive—is humane.

Certain wealthy, liberal residents of Martha’s Vineyard are known for saying things like, “What truly makes our country great is its diversity” and, “Immigrants and refugees revitalize and renew America,” and those who disagree are “racist.” So why didn’t they welcome these Venezuelans with open arms, even if only to score political points? Why did the authorities instead declare a humanitarian crisis and deport them to a military base on Cape Cod after about a day and a half? Are they really that far removed from actually caring about immigrants—or even acting like they do?

The plight of poor people in this country, and in other countries, attempting to emigrate from one country to another is sad. Many people in America and beyond want Venezuelans and others who are suffering so terribly to be lifted out of poverty. That is exactly what the United States and the British Empire did for billions of people—and not just in England and America. But lawless immigration is clearly not the way to do it. Lawless immigration serves another purpose that has nothing to do with immigrants.

Martha’s Vineyard is predominately white, liberal and wealthy. And what is more, about half of the houses on the island sit empty from October to March while their wealthy owners winter elsewhere. So it really is an ideal location for a kindhearted liberal to donate several unused beds to an oppressed immigrant family from South America. America’s liberal elites would rather have the impoverished residents of Del Rio, Texas, shoulder the burden of the migrant crisis they created so that their million-dollar estates are not soiled by someone just escaping from the Panamanian jungle.

The Chamber of Commerce of Martha’s Vineyard declared 50 Venezuelans a “humanitarian crisis,” but the National Review has done the math: Governor DeSantis would have to send 24,000 immigrants for the island to equally share the burden carried by Del Rio, Texas. Barack Obama has flooded and, through Biden, continues to flood Texas with hundreds of thousands of migrants. He and his radical liberal elites attack anyone who believes in a border and immigration according to the law as heartless. And he certainly doesn’t want them anywhere near his $12 million mansion.

Obama’s 6,900-square-foot Martha’s Vineyard estate has seven bedrooms and 8½ bathrooms, so he could easily house all 50 Venezuelans there himself while he and Michelle live in his D.C. mansion (where he spends most of his time) or possibly Chicago or Oahu. But Obama is not going to do this because he loves wide-open borders, lawlessness, and the opportunities that lawlessness provides for him to advance his agenda of “fundamentally transforming the United States of America.”

But he will definitely use some of his tremendous power to keep the ugly effects of his decisions from spoiling his scenic oceanfront views.

Former Secretary of State Hillary Clinton actually accused Governor DeSantis of “human trafficking” for sending migrants he was not allowed to deport to Martha’s Vineyard, ignoring the fact that the residents of Martha’s Vineyard also stuffed these people on buses and trafficked them to part of Massachusetts much less nice than the one DeSantis sent them to. Such blatant hypocrisy is almost unfathomable. Clinton famously called those who supported President Donald Trump a “basket of deplorables” for their “racist, sexist, homophobic, xenophobic, Islamaphobic” attitudes. Yet you can be sure she will not accept even a miniscule fraction of the migrants streaming into conservative states like Texas into her own neighborhood.

This is why tens of millions of working-class Americans, many of them immigrants, are looking to Donald Trump to look out for their interests. Obama and Clinton need to lead by example and accept 24,000 immigrants into Martha’s Vineyard. Or they need to start protecting Del Rio, Texas, with the same passion they protect their gated communities. But slandering millions of hard-working Americans as deplorable because they refuse to do things that you also refuse to do is a recipe for stirring up resentment and mass discontent in America.

For many liberals, the hypocrisy is largely the point. Michael Moore campaigns against the gun rights of law-abiding citizens, while having an armed bodyguard. Al Gore lectures Americans about the dangers of greenhouse gasses, while guzzling more energy in one year than the average American family uses in two decades. Nancy Pelosi shuts down San Francisco hairdressers and other proprietors with draconian coronavirus lockdowns, but allows one salon to temporarily reopen for her appointment alone. Barack Obama floods the nation with illegal immigrants while keeping multiple mansions empty. The liberal elites are sending the “deplorables” a message: You now live under an American nobility, and there’s nothing you can do about it.

The migrant crisis on the southern border has been raging for 20 months, but Martha’s Vineyard residents are congratulating themselves for allowing the migrants to stay just two days! The Bible actually has a lot to say about such shocking hypocrisy. The late Herbert W. Armstrong proved in his most popular book, The United States and Britain in Prophecy, that the English-speaking peoples of the world largely descended from the ancient Israelites. And the Prophet Isaiah foretold that God would send a foreign nation against end-time Israel because of its gross hypocrisy.

“Woe unto them that decree unrighteous decrees, and that write grievousness which they have prescribed; To turn aside the needy from judgment, and to take away the right from the poor of my people, that widows may be their prey, and that they may rob the fatherless! … O Assyrian, the rod of mine anger, and the staff in their hand is mine indignation. I will send him against an hypocritical nation, and against the people of my wrath will I give him a charge, to take the spoil, and to take the prey, and to tread them down like the mire of the streets” (Isaiah 10:1-2, 5-6).

Can you or I argue against God that we have not allowed horrendously hypocritical people to gain power over this nation? Can you argue against God that not only the elites but the people in general are guilty of shocking hypocrisy? The radical left’s sanctimonious attacks on those trying to enforce border security while they live in gated communities reminds us of Jesus Christ’s criticism of the Pharisees. “For they bind heavy burdens and grievous to be borne, and lay them on men’s shoulders; but they themselves will not move them with one of their fingers” (Matthew 23:4).

America is indeed a nation mired in hypocrisy and sin, so God is going to send it some harsh correction.

For a deeper understanding of the dangerous spirit behind the radical left, please read America Under Attack.