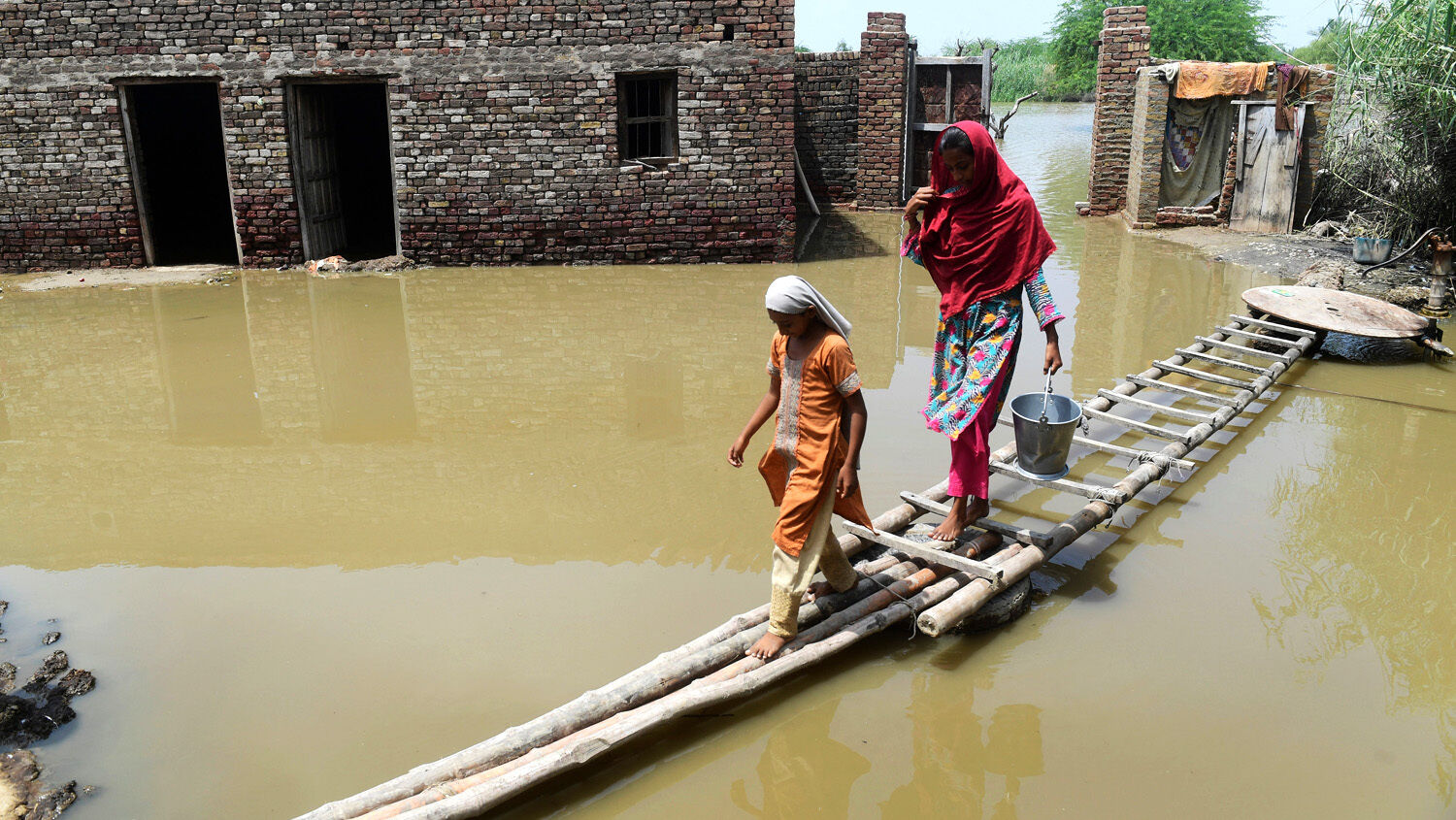 Flood affected people walk on a temporary bamboo path near their flooded house in Shikarpur of Sindh province on August 29, 2022.
ASIF HASSAN/AFP via Getty Images

This year’s monsoon season has had a historic impact on Pakistan’s landscape.

Much of Pakistan seemed “like a sea,” Pakistani Prime Minister Shehbaz Sharif said on September 7, after the nation suffered weeks of monsoon rains 10 times heavier than normal. The Indus River—known to have higher levels during monsoon season—drowned a third of the nation, which affected some 33 million people. More than 1,340 Pakistanis have died, including at least 466 children.

“The situation … is absolutely chaos everywhere. People are on the roadside, waiting for humanitarian assistance, like water, food, shelter, and this is unprecedented in the history of Pakistan,” Islamic Relief Worldwide ceo Waseem Ahmad said on September 1. “In 22 years of my experience as [a] humanitarian aid worker, I never saw such destruction caused by floods.”

The devastating deluge is predicted to cost Pakistan about $10 billion. Two million acres of crops intended to sustain the nation over the winter have been washed away; 800,000 farm animals have died; over 100 bridges have collapsed or been submerged; roughly 1,864 miles of road are damaged.

A section of the vital Karakoram Highway has collapsed after severely-flooding river swept away the foundation rock and soil underneath it in Kohistan. #Pakistan #PakistanFloods pic.twitter.com/v4DJ9MqAhE

Every day flood situation in Baluchistan is getting worse. May Allah help (especially Pak Army, Al-Khidmat, &others) who are participating in flood relief activity. #FloodinPakistan #PakistanFloods #Flood pic.twitter.com/7XxZkqVati

Pakistani authorities are still sending warnings to evacuate in some provinces. The damaged roads and bridges have left many people stranded. Rescue boats and helicopters are bringing aid and transporting people to safer ground. However, raging waters are preventing helicopters from landing.

In 2010, Pakistan experienced similar catastrophic floods. Twenty million people were affected, and 14 million Pakistanis were left homeless. An estimated 2,000 people died that year. It took months for those displaced to return home or find a new place to live. Many fear this year’s monsoon season will surpass 2010’s historical record.

Massive climatic disasters are happening regularly. Evidence shows they are increasing in frequency and intensity. The usual political and media response is to blame this trend on “climate change.” The worse the disaster, the louder the calls for taking action against climate change by addressing the supposed man-made causes, such as carbon emissions and the use of fossil fuels.

I don’t want to discuss political views; my job is to give you God’s view. Our great Creator knows that climate change is not the cause of weather disasters!

Mr. Flurry explained that devastating weather events, such as what Pakistan is facing, are God’s attempt to get mankind’s attention and turn humanity to Him. Usually people look to their Maker only in times of crisis. God does not want mankind to suffer (Ezekiel 33:11), but all man’s problems result from sin (verse 10). Pakistan’s devastation shows the consequence of disobeying God.

As our free booklet Why ‘Natural’ Disasters? explains: “To recognize our own helplessness, unhappiness and inadequacy apart from God is the most fundamental lesson any of us can learn.” For more information on how God uses weather disasters to correct mankind, read “The Deadly Climate Change Deception” and request a free copy of Why ‘Natural’ Disasters?