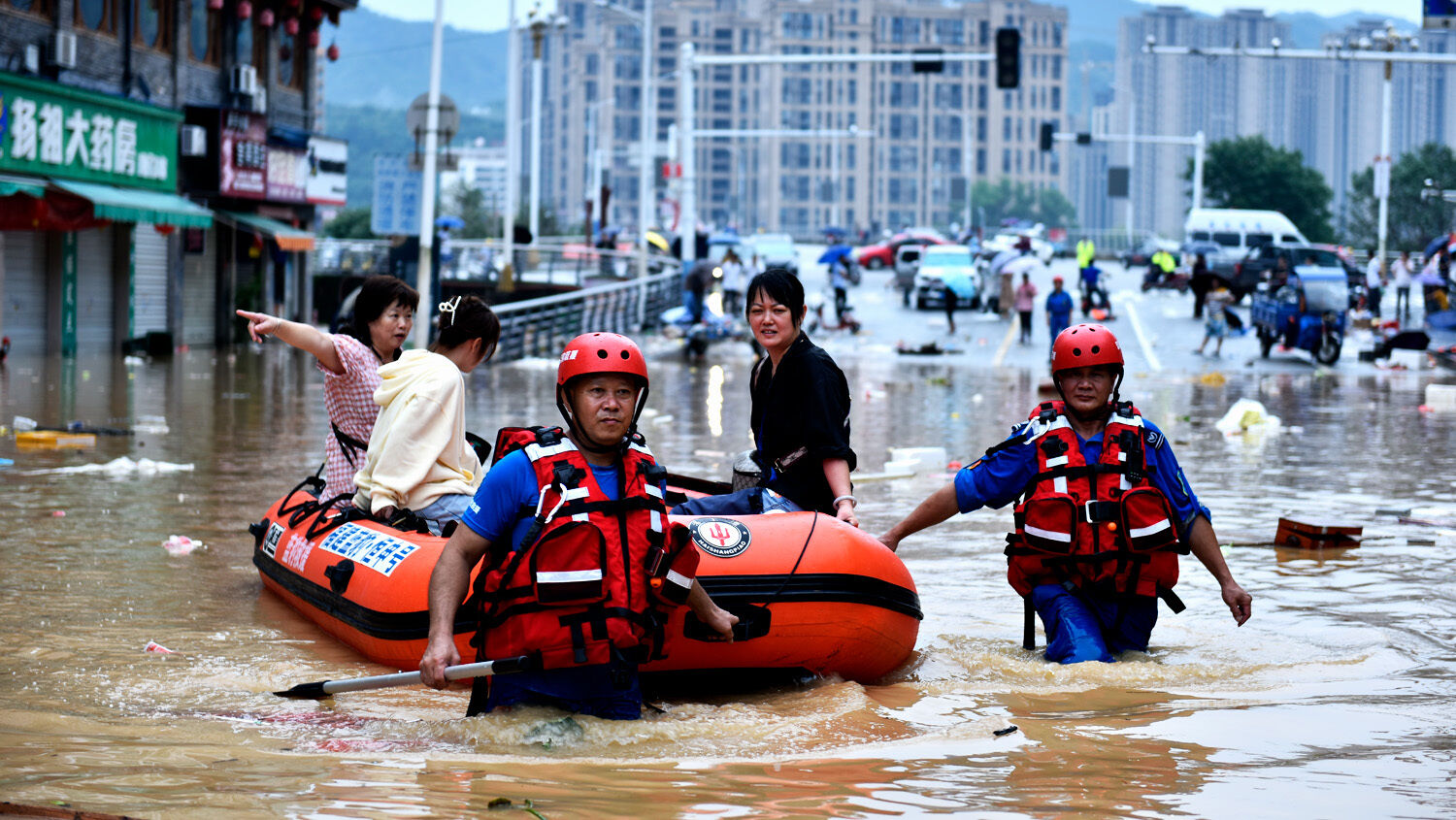 Rescuers use rubber boats to evacuate stranded people in floodwaters on June 19 in Jian’ou, Fujian province of China.
Huang Jiemin/VCG via Getty Images

Plants dried up by extreme heat might get swept away in floodwaters.

China has been battling a record heat wave this summer, but recent weather forecasts warn residents that floodwaters could be coming. China seems to be either scorched or underwater.

The record-breaking heat wave in northwestern and southeastern China has dried up close to 530,000 square miles of land. Chinese government data said that in July alone, high temperatures caused some $400 million worth of economic losses, affecting more than 5 million people and 1 million acres of land. The heat wave has dried up rivers and lakes across the region. China’s largest freshwater lake, the Poyang, began receding in July, two months earlier than normal. The Yangtze, China’s largest river also shrank over the summer. This river provides drinking water to over 400 million Chinese and is vital to China’s economy. In the Chongqing region, 66 rivers dried up.

Yet as of August 28, over 100,000 people had been displaced as heavy rainfall forecasts warned of possible flood risks to the Sichuan province and Chongquin city. In one night, 30,000 people in the cities of Guangyuan, Mianyang and Chengdu had to leave their homes and find safer ground. A week ago, the Sichuan province was suffering from 111.2 degree temperatures. The region is going from drought to floods in a matter of days.

Such drastic weather changes are no longer anomalies. Across the world, economies and agricultural sectors increasingly struggle to cope with climate instability. What is causing the inconsistency and imbalance in the weather?

[M]any scientists point to climate change. To account for everything climate-related—cold fronts, freakish blizzards, flooding rains, hurricanes and a host of other dangers—many of them blame greenhouse gases, injected into the atmosphere via human activity like deforestation and burning of fossil fuels. Thus, the lesson they draw from calamities is that man needs to stop producing carbon dioxide.

The Bible, however, gives an alternative explanation for chaotic weather. Job 36:27 through the end of chapter 37 makes clear that the Creator God controls the weather. He has the ability to send rain or take it away according to His will. “For he saith to the snow, Be thou on the earth; likewise to the small rain, and to the great rain of his strength” (Job 37:6). Our booklet further explains:

The Bible teaches that not only is nature the creation of God’s mind, it is, in fact a vital instrument through which He communicates with us. …

The Bible reveals that God has set spiritual and physical laws in motion, and that He is presently allowing humans to develop their own ways of living—contrary to His laws—and to reap the natural consequences that result from those ways, including weather upsets.

When we see intensifying climate calamity around the world, such as the current crises in China, we should view that as evidence that God is punishing mankind for its failure to turn to Him. To prove this for yourself, request a free copy of Why ‘Natural’ Disasters?