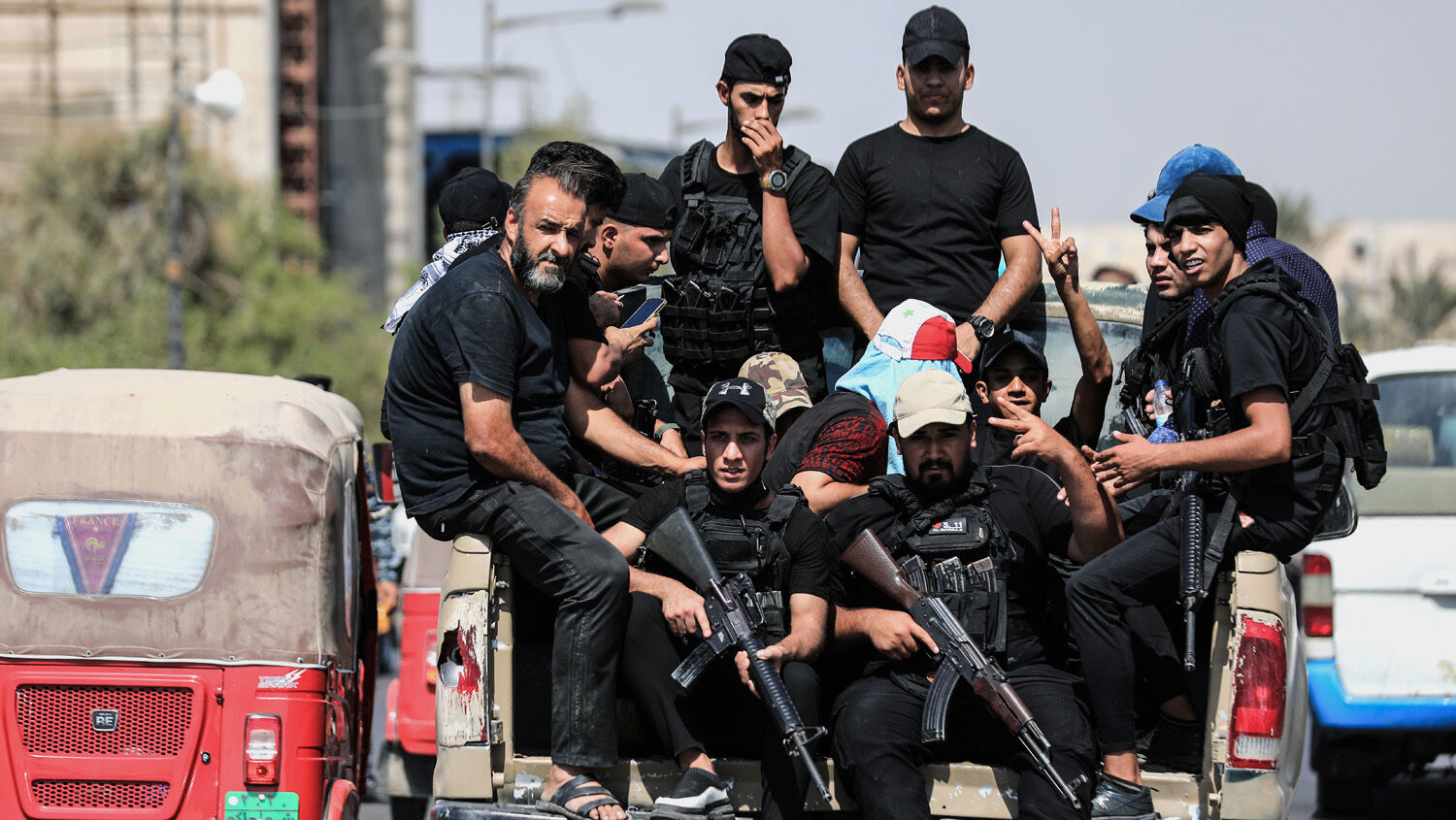 Violence broke out in Baghdad, Iraq, on Monday after prominent Shiite cleric Muqtada al-Sadr announced his retirement from politics. According to the Jerusalem Post, “rpgs [rocket-propelled grenades], gunfire and mortars were reportedly used in the clashes. Nearly constant gunfire was heard throughout the evening in Baghdad.” At the time of writing, 14 people have been killed and many injured. The clashes between Sadr’s supporters and security forces mark a new low for Iraq’s ongoing political crisis. The government has been deadlocked since the last elections in October 2021.

At the heart of the issue is an ongoing feud between Iraq’s two largest Shiite political factions. On one side is the ultra-nationalist Shiite cleric Sadr. He is the most popular politician in Iraq with his anti-corruption rhetoric. He is especially popular with the large Shiite underclass and impoverished who see Iraq’s entrenched political corruption as the source of all their problems.

On the other side is an alliance of pro-Iranian Shiite parties called the Coordination Framework. The framework represents Iraq’s political establishment and is led by Sadr’s longtime Shiite political rival, former Prime Minister Nouri al-Maliki.

Who will come out on top? Has the anti-corruption crusader been defeated by the establishment? And how will Iraq’s political troubles affect you? To answer these questions, we must look back to the United States’ invasion of Iraq in 2003.

In theory, this system sounded perfect for a nation so sharply divided along ethno-religious lines. Unfortunately for the average Iraqi, rather than preventing government corruption, it empowered it. Politicians exploited governmental resources to advance their own political agendas. For example, government jobs are handed out based on nepotism and party affiliation rather than merit. Ministries grant government contracts to party-affiliated contractors who give the largest kickbacks. The result is that the average Iraqi has become poorer. Politicians and their friends and family have gotten richer.

Fast-forward to the October 2021 elections. Riding his anti-corruption, nationalist message, Sadr won and received the mandate to form a government. He then announced his intent to ditch the sectarian apportionment system to form a national majority government with Kurdish and Sunni parties. This meant he would be excluding the other Shiite parties in the Coordination Framework, the very same parties who’ve held the power within Iraq until now.

The framework, however, refused to give up its power so easily. Enraged, they reasoned that if Sadr could break precedent, so would they. Using their control over the judiciary, they changed election law. The Federal Supreme Court decided a two-thirds supermajority was required to form a government instead of the simple majority previously required.

After months of trying, Sadr was unable to form a government. He had his members of parliament resign in protest on June 13 in an effort to trigger early elections. Using Iraqi law, the framework filled most of the vacated seats and directed Shia al-Sudani (a puppet of Maliki) to form a government on July 25.

In response, Sadr called on his supporters to protest and occupy government buildings. These protests have prevented parliament from convening. Sadr has also called upon the judiciary to dissolve the parliament, something the judiciary insists it doesn’t have the authority to do.

And thus, we arrive at Iraq’s current political impasse. Though Sadr has announced his retirement from politics, don’t discount him just yet. This isn’t the first time he has “retired,” and he is still Iraq’s most popular political figure.

Where does this leave Iraq? Tensions between the two sides have exploded into violence and an all-out intra-Shiite conflict isn’t out of the question.

Whichever side comes out on top, Iran will be the ultimate winner.

The framework’s close affiliation with Iran isn’t a secret. Sadr’s rhetoric and recent media coverage lead one to believe he is anti-Iranian. But he is a Shiite cleric. The leader of the Shiite world, for all intents and purposes, is the supreme leader of Iran. When the U.S. invaded Iraq, Sadr led an anti-American Shiite resistance whose leaders were trained by Iran. So where does Sadr stand with Iran?

“There is no doubt that Sadr has played the nationalist card in recent years,” wrote Shayan Talbany, an analyst at the Tony Blair Institute for Global Change. “However, like many of Iraq’s political power brokers, his relationship with Iran is complex and multifaceted, and the West needs to understand this. … Sadr stands up rhetorically against Iran because that matches the popular mood, but in reality, Sadr is as close as anyone to it. … Sadr is not anti-Iran; he just wants to be the primary figure Iranians (and everyone else) have to deal with.”

As Talbany pointed out, Sadr has deep ties to Iran. He regularly visits for both religious and family reasons. He’s met with Iran’s supreme leader on multiple occasions, has had meetings with the Islamic Revolutionary Guard Corps leadership, and even spent time being educated in Tehran. “Sadr wisely recognizes that Iran is still a—if not the most—powerful external actor in Iraq, and his relationship with it is not as strained as he’d like people to think,” Talbany wrote. “Iran still has sway over Sadr, and Sadr knows better than to cut off those ties completely.”

For over 30 years, Trumpet editor in chief Gerald Flurry has warned that Iran will gain control of Iraq. In December 1994, Mr. Flurry wrote, “Is Iraq About to Fall to Iran?” When the U.S. removed Saddam Hussein in 2003, many people believed it would bring a new era of peace to the Middle East. But Mr. Flurry warned that America had just paved the way for Iran to dominate the Middle East.

In June 2003, Mr. Flurry wrote, “Now that Iraq has been taken out of the picture, Iran is even closer to becoming the reigning king of the Middle East. It may seem shocking, given the U.S. presence in the region right now, but prophecy indicates that, in pursuit of its goal, Iran will probably take over Iraq. At least, it will have a heavy influence over the Iraqi people. … Have we now cleared the way for Shiite Iran to rule over Shiite Iraq?”

Looking at Iraq today, it’s obvious that Mr. Flurry’s warning was accurate. But this isn’t the only event or trend he’s accurately predicted for the Middle East.

When America launched its invasion of Iraq, Mr. Flurry said that America would lose its “war on terror.” He predicted that America would grow weary of fighting and withdraw from the Middle East, allowing Iran to move in. After America’s shameful surrender of Afghanistan to the Taliban, is there any question that he was right?

Mr. Flurry has been predicting since the 1990s that Iran would get nuclear weapons. Iran and the U.S. are close to signing a deal that would “pave with gold” Iran’s path to nuclear weapons. He said that Iran would become the king of radical Islamic terrorism. Who else sponsors or conducts terrorism more than Iran today? How could Mr. Flurry make such accurate predictions and get them right time after time? He based his predictions on the sure word of Bible prophecy—prophecies that guide the Trumpet’s news coverage every week.

To learn more about these stunning prophecies, request a free copy of Mr. Flurry’s booklet The King of the South.