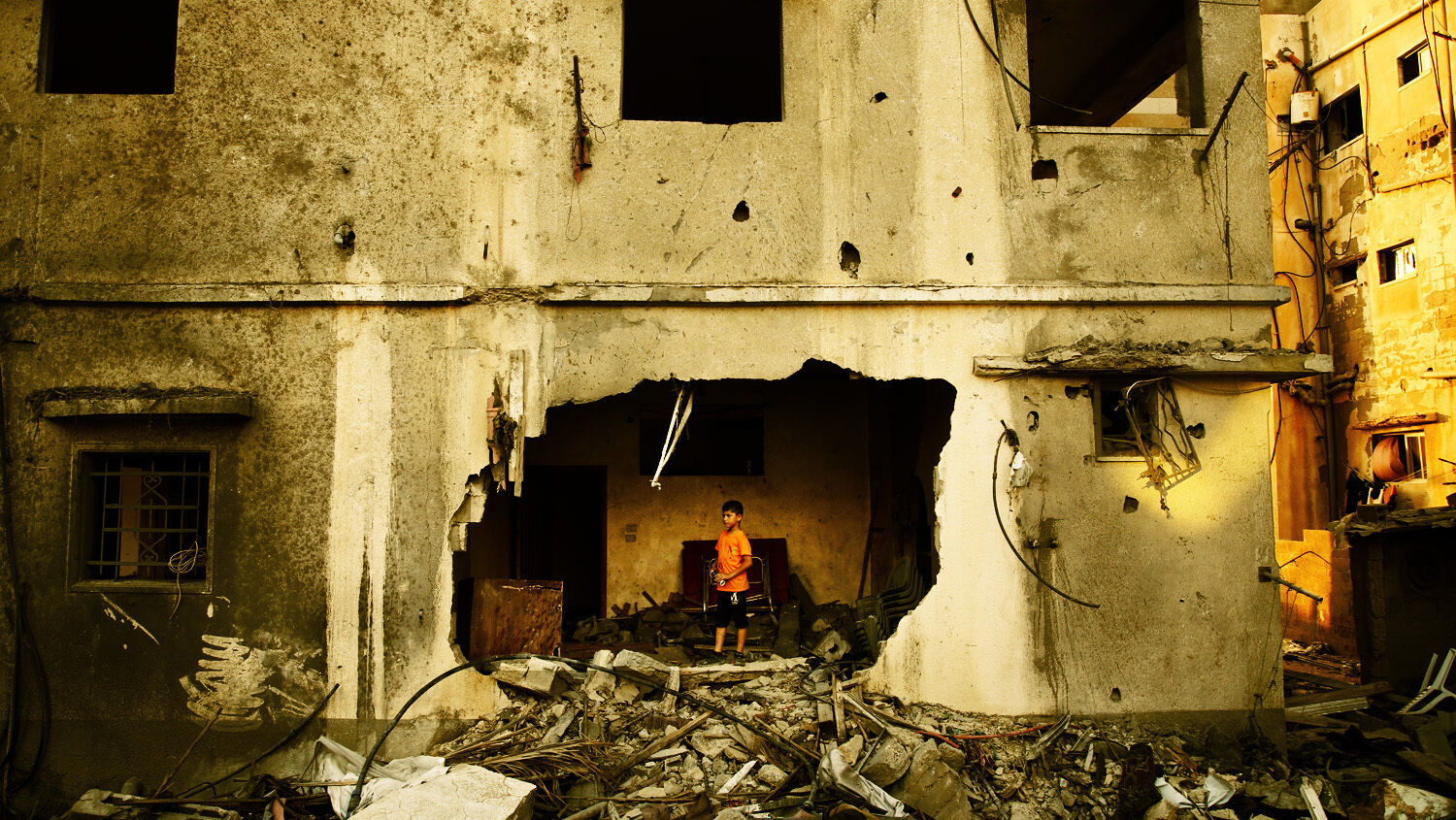 A Palestinian man inspects their damaged home in Gaza city early on August 9, 2022 after a ceasefire between Israel and Palestinian militants came into force.
Majdi Fathi/NurPhoto via Getty Images

After three days of fighting, a ceasefire went into effect on August 7, ending the latest conflict between Israel and the Palestinian Islamic Jihad (pij) in Gaza. By all measures, Israel’s Operation Breaking Dawn was a complete victory for Israel. The Israel Defense Forces (idf) decapitated the pij’s leadership in Gaza; destroyed much of the pij’s weaponry and infrastructure; kept civilian casualties to a minimum; and kept Hamas out of the fighting. Incredibly, it was able to achieve all this without a single Israeli casualty. In a rarity, the international community did not condemn Israel for defending itself.

According to the idf, during the three days of fighting, the pij launched over 1,100 rockets and mortars at Israel. Of those, 200 fell short into Gaza or misfired, killing 15 Palestinians. Israel’s Iron Dome intercepted 380 rockets and mortars that would have struck cities or towns. The rest fell harmlessly in unpopulated areas.

More than 1,100+ rockets were fired by Islamic Jihad in Gaza over the last 3 days. Here are the stats: pic.twitter.com/BQcA8yXotA

But what has Israel’s total victory over the pij changed? Is Israel any safer than it was before the conflict started? To answer these questions, consider the latest Gaza flare-up and the circumstances that led up to it.

On Monday, August 1, Israel’s security forces arrested the pij leader in the West Bank, Bassam al-Saadi, in the city of Jenin. Following his arrest, the pij leadership in Gaza threatened to retaliate against Israel should Saadi be killed or harmed. In an unprecedented step, Israeli officials leaked images of Saadi to prove he was well.

Preparing for the worst, Israel shut down all roads, rail lines, and locked down all communities around Gaza. The idf also began to shift air defense resources toward Southern Israel as well as bolster the idf’s Gaza Division with reservist troops.

The Palestinian Islamic Jihad is the second largest military and political organization in the Gaza Strip next to Hamas. Like Hamas, it rejects the Oslo Accords, rejects any two-state solution, and seeks nothing short of the complete destruction of Israel. Also, like Hamas, the pij is funded and armed by the world’s number one sponsor of terrorism: Iran.

But there is one very big and important difference between the pij and Hamas. As Herb Keinon, a senior contributing editor for the Jerusalem Post, put it, “Iran supports Hamas, but it controls Islamic Jihad.”

This is one of the reasons why Hamas stayed out of the fighting. Hamas is the de facto ruler of the Gaza Strip. It was not going to allow someone else to decide when it can attack Israel. It is also receiving a lot of financial, economic and humanitarian aid from Israel, Egypt and Qatar. Hamas is also still rebuilding its tunnel networks and rocket facilities that the idf destroyed in their last clash.

The real puppet master behind the scenes for this conflict and nearly every existential threat Israel faces is Iran.

In a press release after the start of Operation Breaking Dawn, Israeli Prime Minister Yair Lapid said, “Our fight is not with the people of Gaza. Islamic Jihad is an Iranian proxy that wants to destroy the State of Israel and kill innocent Israelis. The head of Islamic Jihad is in Tehran as we speak.” And so, he was.

Shortly after the arrest of Saadi, the pij’s overall leader Ziyad al-Nakhalah, went straight from his headquarters in Beirut, Lebanon, to his Iranian masters in Tehran, Iran, to negotiate with Egyptian mediators. In those negotiations, he demanded the release of Saadi, something he knew Israel would never do. On Wednesday, August 3, Nakhalah met with Iranian Foreign Minister Hossein Amir-Abdollahian. The following day, Nakhalah met with Iranian President Ebrahim Raisi. After Operation Breaking Dawn had begun, a picture emerged of Nakhalah in a secret meeting with the current head of the Islamic Revolutionary Guard Corps (irgc), Hossein Salami.

But what was Iran’s goal for this conflict?

At the start of the fighting on Friday, August 5, the irgc tweeted: “We clearly say that we interfere whenever there is the issue of opposing Israel. After this also, wherever any nation or group fights Israel, we stand behind them and support them.”

That same day, the head of the irgc’s Quds Force, Brig. Gen. Esmail Qaani, gave a speech at a memorial for three irgc service members. In the speech, he said, “Hezbollah’s sons are making plans to bring down the last blow against the Zionist regime … and to realize the wish of Imam Khomeini to eradicate Israel from the map and the face of the Earth.” Is Iran so focused on Israel because it hates the Israelis that much or is there another reason for its aggression? The answer is in the name of Iran’s most elite military unit.

Iran’s Quds Force is the irgc’s most infamous special forces unit. It answers directly to Iran’s supreme leader and is responsible for an unimaginable number of murders, attacks, kidnappings and other atrocities. “Quds” is an Arabic term for “Jerusalem.” It is not a coincidence that Iran named their most elite and infamous unit the “Jerusalem Force.”

Trumpet editor in chief Gerald Flurry writes in his booklet The King of the South:

In 2010, then President [Mahmoud] Ahmadinejad emphasized the global significance of Quds Day, or Jerusalem Day—Iran’s annual display of support for the Palestinian cause and the “liberation of Jerusalem.” The Meir Amit Intelligence and Terrorism Information Center reported that “according to Ahmadinejad, the issue of Jerusalem is not limited to one geographic area; it is not just a Palestinian issue and it is, in fact, ‘even greater than the issue of Islam.’”

Few people understand this Muslim passion for Jerusalem and its holy sites! It is the kind of passion that causes war!

So, what has Israel’s recent victory changed and is Israel any safer for it?

Jewish News Syndicate editor in chief Jonathan Tobin summed up the answer quite nicely, writing, “As with several other such bouts of fighting in and around Gaza over the last 14 years, it has ended with Israel offering the Palestinian terror groups ‘quiet for quiet.’ It is, as almost all Israelis know, a problem without a solution.”

While Israel may have done great damage to one of Iran’s proxies, it has many, many more. Hamas is simply biding its time while it rebuilds, rearms and prepares for its next assault on Israel. War with Hezbollah in the north over an offshore oil field isn’t out of the question either as Lebanon continues to grow ever more unstable. Iran does not lack for willing martyrs eager to “eradicate Israel from the map and the face of the Earth.”

Battling for its survival is nothing new to Israel. It has been fighting literally since the day it became a nation in 1948. But is Israel doomed to face off against enemies who desire nothing short of its annihilation forever? Is Israel’s current situation truly “a problem without a solution”? There is a solution, and it has everything to do with the city of Jerusalem.

To learn about the hope-filled solution to Israel’s troubles, please order free copies of The King of the South and The Eternal Has Chosen Jerusalem.