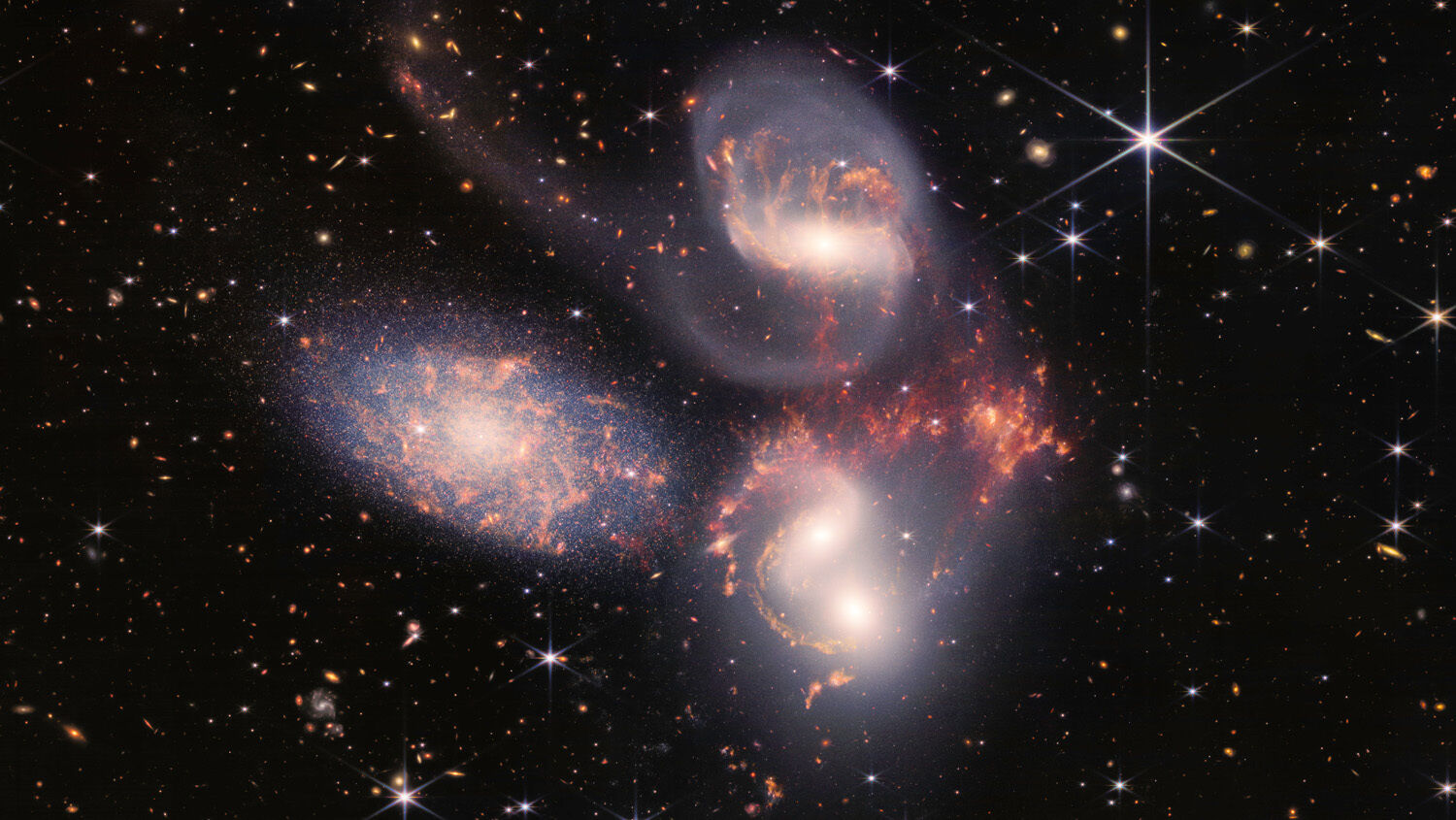 The James Webb Space Telescope has been sending back data for just a matter of weeks, and it is already causing major problems for the main theory to describe a creation with no need for a Creator.

This theory states that the universe began with a big bang—and evolved from then on out. It all began with an explosion of particles and energy (what caused the explosion isn’t addressed). Random variations in this cloud of particles caused some to clump together. Their gravity attracted more. Stars ignited and then drew together other stars to form galaxies.

A huge amount of work has been put into the theory, with massive, complex experiments designed to discover every detail of how particles would behave under those conditions. It has led to thorough predictions of the way galaxies gradually evolve, with smaller, simple galaxies dominating the early universe, and bigger, brighter, more complex ones forming later.

The trouble is, those predictions don’t match with the early results from the James Webb Space Telescope.

As Webb looks out into the universe, it is looking back in time. When you’re looking at the most distant galaxies, you’re seeing light that has spent billions of years traveling to us. Scientists believe that some of the galaxies Webb has photographed are from 300 to 400 million years after the beginning of the universe. This is very early; scientists believe the first stars formed 250 million years into the universe’s existence. Webb is already giving us our best-ever look at the universe’s ancient history.

The first problem is that it’s much easier to find these ancient galaxies than experts thought it would be. Pre-print papers all express surprise at how easy it was to find bright, ancient galaxies. “What is most remarkable of this first search is that we have found two bright … sources, one at … well beyond the expectations” based on previous models, wrote a team led by Marco Castellano, of the National Institute for Astrophysics in Rome.

The discovery of an ancient “unexpectedly luminous galaxy may challenge our current understanding of early galaxy build-up,” wrote a team led by P. A. Oesch in The Astrophysical Journal.

Rohan Naidu, from the Harvard and Smithsonian Center for Astrophysics, and colleagues found one bright galaxy easily. Current theories say they should have to search 10 to 100 times more of the sky before finding it.

Steven Finkelstein et al said their discovery of a particularly distant galaxy hinted at “significant differences between the physical assumptions in these models and the real early universe.”

“Should follow-up spectroscopy validate this redshift, we will learn that our universe was already aglow with fairly massive galaxies less than 300 [million years] after the big bang,” they wrote.

Haojing Yan of the University of Missouri–Columbia et al concluded after a search for candidate galaxies, “Neither the high number of such objects found nor the high redshifts [or ancient age] they reside at are expected from the previously favored predictions.”

“We had in mind an idea of what galaxies at these [distances] would look like, and how much detail we’d be able to see, but I think the reality is just kind of blowing our mind,” Jeyhan Kartaltepe of the Rochester Institute of Technology in New York told Nature.

“There’s hardly any empty space that doesn’t have something,” he said.

Again, all these papers are being released just weeks into Webb’s lifetime. “This is just the beginning of the beginning,” Naidu said.

The type of galaxies Webb is uncovering is also at odds with the latest theories.

Leonardo Ferreira of the University of Nottingham et al titled their paper “Panic! At the Disks.” Current theories of galactic evolution say that older galaxies are less uniform in shape—twisted and distorted by their formation in the more cramped earlier universe. Webb is already indicating that neat, disk-shaped galaxies are in fact 10 times more common in the early universe than the theories suggest. Nature described the find, writing:

“With the resolution of James Webb, we are able to see that galaxies have disks way earlier than we thought they did,” says Allison Kirkpatrick, an astronomer at the University of Kansas in Lawrence. That’s a problem, she says, because it contradicts earlier theories of galaxy evolution. “We’re going to have to figure that out.”

Another problem is the ingredients of the galaxies. Theories of galactic evolution say that stars started out mostly hydrogen—the most simple element. Over time, these stars used this hydrogen to build up more complex elements. Look into the earlier universe, and these more complex atoms won’t have been built yet.

Again, the reality is different. A study by Jonathan Trump of the University of Connecticut and others found that Webb indicates the early universe is much richer in elements like oxygen than the models would predict.

This all adds up to a serious challenge to these theories of galactic evolution. Kirkpatrick told Nature, “Right now, I find myself lying awake at 3 in the morning, wondering if everything I’ve ever done is wrong.”

Thus far, these scientists aren’t rejecting the idea of galaxies slowly evolving—instead they pushed back the formation of galaxies to a point “extremely early in the history of the universe,” as one study put it. But if this is what we’ve received in just a few weeks, how long will these theories last when more data comes pouring in?

As Webb launched, nasa administrator Bill Nelson looked back to when “a shepherd grazing his sheep would look up at the night sky. He became a poet. And he penned the words, ‘The heavens declare the glory of God; the firmament shows his handiwork.’ That shepherd, that poet, became king. And those immortal words in Psalm 19 encapsulate the expressions that we have today—the handiwork of God—as we peer back in time, over 13 billion years ago, [and] capture the light from the very beginning of the creation.”

Webb, like so many science experiments before, declares God’s glory. It points to a Lawgiver who set up the entire universe to run according to consistent, discoverable laws. But Webb is also clearly revealing God as Creator. Flaws in these theories of an accidental and gradual development of the universe are already being exposed.

Plenty of scientists are sure to explain every image and data set that Webb sends—though it be the infrared signature of the Creator Himself—as proof that there is no Creator.

But as the images and data provide an ever clearer picture, there are many scientists who are turning to face reality. They are willing to look at the data in good faith and see what it actually teaches us, even where it further proves that the universe has design and intent. …

Webb is ready to literally see invisible things from the creation. If it works, we are about to see power, beauty and even more dazzling proof of the great God who made it, and who made us. There is absolutely no other way that all of this could have come together. Scientific knowledge is increasingly aligning with the descriptions of creation contained in the Holy Bible.

Looking at the cosmos, you are looking at the handiwork of God! With advanced telescopes and other extraordinary instruments, the more we learn, the more impressive it becomes.

Here was a provable prediction, set in writing, before any of the data was released. And that prediction has stood up much better than these theories of galactic evolution.

Watch this telescope for more proof. Romans 1:20 says, “For the invisible things of him from the creation of the world are clearly seen, being understood by the things that are made, even his eternal power and Godhead; so that they are without excuse.”

We can see proof of a great Creator and Lawgiver all around us. With high-powered telescopes, that proof is only becoming clearer, the excuses more tenuous. The only question is, Will we listen to Him?

Keep watching the results of this space program as it points back to your Maker and forward to your future.

For more on your direct connection to what is being revealed in the universe, read our free booklet Our Awesome Universe Potential.