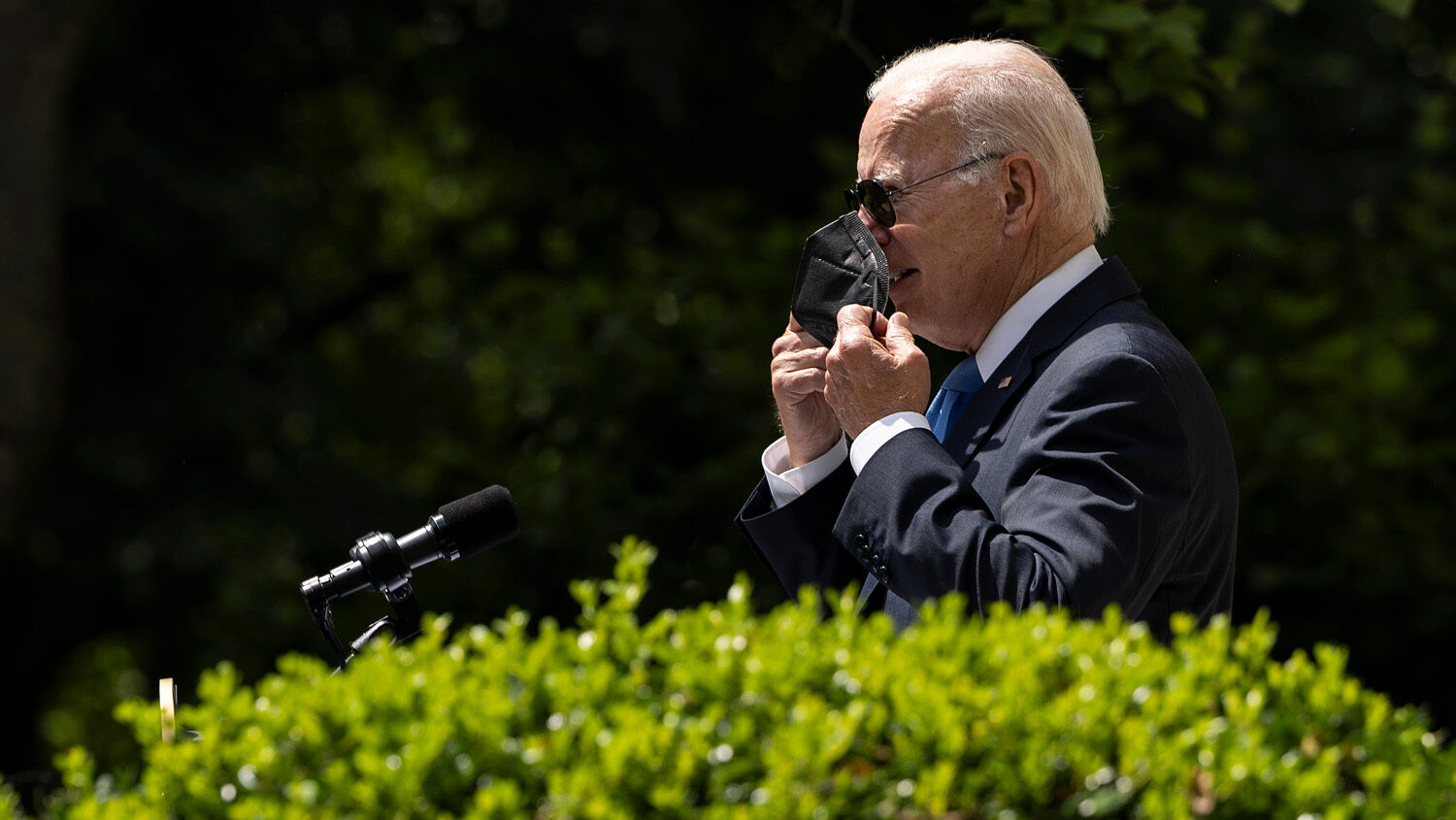 U.S. President Joe Biden takes off a mask as he enters the Rose Garden to deliver remarks on covid-19 at the White House on July 27 in Washington, D.C.
Anna Moneymaker/Getty Images

American politicians flaunting blatant hypocrisy are sending you a message.

When a covid-positive president took his mask off while standing alone on the South Portico of the White House, journalists went into a frenzy. One at cnn compared it to “something out of North Korea.” Another at msnbc called it a “Mussolini moment.” When another covid-positive individual stood at the same portico at the same White House, maskless, the reaction was pointedly different.

Joe Biden announced from the White House balcony on Thursday that he had tested positive for covid. He said he’d been double-vaccinated and double-boosted and was feeling good. And no, the propaganda journalists did not fill the headlines with “maskless,” “infected,” “sick,” “still contagious,” “toxic” and comparisons to megalomaniacs and dictators. But they did that when President Trump had covid.

Biden has officially contracted the same virus that journalists spent more than a year obsessing over and posting death counts for, the same virus that Biden amplified with a candlelit memorial at that same portico last February. Journalists tried to whip up a scandal when Trump had the virus. This time, when White House Press Secretary Karine Jean-Pierre was asked the important question of how Biden—who presumably uses the best pharmaceutical and other countermeasures in the world, along with everyone around him—contracted the virus, she replied, “I don’t think that matters.”

The double standard is obvious. But that’s the point.

Biden and the people controlling him know President Trump had covid, how he handled it, and how journalists spun it. They know that putting Biden on the White House portico to make his announcement makes the comparisons even clearer.

The radical elites know they are breaking the rules, breaking the law. They are defying you to do anything about it.

Nancy Pelosi does not get a haircut during a lockdown because she forgot she helped order that lockdown. Gov. Gavin Newsom does not have extenuating circumstances when he attends lavish dinners in public and sends his children to learn in private school in person, while he compels those he governs to stay at home and stay out of school. Al Gore does not fly private jets around the world to lecture people about their carbon emissions because he fails to realize the hypocrisy. Joe Biden does not claim ignorance of his son’s dealings because such a claim is believable. Stacey Abrams, Deborah Birx, Bill de Blasio, Muriel Bowser, London Breed, Andrew Cuomo, Lori Lightfoot, Chuck Schumer, Rashida Tlaib, Elizabeth Warren, Gretchen Whitmer, Anthony Fauci himself and too many other radical elites to count do not go to restaurants, salons, schools, gymnasiums, stadiums, protests, parties and everywhere else they please because they fail to realize that they live by one standard and make everyone else live by another.

These elites are deliberate in everything they do, especially everything visible to the public. They are disobeying their own rules to fool those who pay little attention and, for those who pay closer attention, to show you who has the power and how much power they have.

“We are getting a hard look at just what the radical left is willing to do in order to seize power and stay in power,” my father wrote in “Saving America From the Radical Left Temporarily.” “They have no respect for the rule of law! They believe they are above the law. It is no exaggeration to say that such contempt for the nation’s founding principles is a threat to the republic!”

This rampaging double standard among the elites is further evidence that perhaps the deadliest threat to the American republic is its own lawlessness!

For generations now, Americans have tolerated lawlessness among their leaders and among themselves. Even religious Americans have rejected the belief that human beings must live by the law of their loving Creator. This is a major reason why Christian and conservative Americans have lost their power and been helpless against socialists and anarchists.

The battle has moved from fighting over what the law should be to rejecting the rule of law altogether and replacing it with superior willpower. American elites are not governing according to what they should do or according to the law but according to what they will to do. This is true of one man (currently avoiding the law and other accountability by working behind the scenes) more than any other.

As the coronavirus response and other “big lies” have proved, large numbers of people can believe large lies. They can reject medical, biological, historical and other realities, claim to be right, and dare you to stand up to their will.

You are seeing people worship their own ideology, their own selves, their own will. They will reject and attack anything that stands in their way, and they have an incredible amount of power!

Where does that mindset and that power come from? I encourage you to answer that by taking a few minutes to read what my father wrote in “The War of the Wills.” He first focused in on the depth of this concept in 2013, but now you are seeing it out in the open: You can’t check the news without seeing it in monstrous action!

My father lays out strong evidence in his newly updated book America Under Attack that covid-19 is a bioweapon engineered for “fundamentally transforming” America. The elites’ reaction to the virus was definitely a weapon used for that purpose. They crashed the economy, decreased U.S. gross domestic product more severely than at any time since the Great Depression, increased the national debt by nearly $10 trillion, pushed 22 million people into unemployment, destroyed an uncountable number of small businesses, and transferred money from middle-class Americans to the wealthy and their corporations. They also caused school closures, anxiety, obesity, alcoholism, crime, drug overdoses and suicide. And they used the crisis to become even more lawless, enabling them to steal the 2020 presidential election.

The government response is also what gave propaganda journalists the pretext to attack President Trump and everyday Americans for trying to live normal lives, while establishing the elites’ superiority. They are taking the God-given constitutional rights you thought you had and making those rights—and you—subject to their will.

The lawlessness is now spreading like a wildfire burning completely out of control. What will it consume next? That will be determined not by the law or the will of everyday Americans but by the strong-blowing wind of the elites’ willpower. The fact that they are now openly applying restrictions to everyone but themselves shows that they have consolidated enough raw power to stop pretending to be subject to the law of the land, the will of the people and certainly the law of God.

You might think that such an illogical, reality-rejecting, bizarre attitude would have little power. You might think that someone who basically says there is no such thing as a woman would be a rarity on the fringe of society. Yet those people are numerous and exert power from the highest offices in the country!

There is something, someone giving this lawless worship of self-will enormous power.

“When human beings reject God’s truth, they start worshiping their own opinions,” my father writes. “They start thinking like Satan. When this type of thinking becomes entrenched enough, people stop even caring about the difference between true and false. They start trying to magically ‘create reality where no reality is.’ Satan’s broadcasts make us impervious to reason—if we allow it.”

Each of us thinks that our own beliefs are right. We can come to hold this belief so deeply that, if we are not humble and we do not worship God and His will, we come to worship our own will! And our own will is easily manipulated by the original will-worshiper, the very real and very active Satan the devil!

When you look for evidence of Satan, don’t look for the cartoon- or horror film-style caricatures. Look for someone presenting himself as an “angel of light,” as the Bible says. And look for lawless will worship. You will see that influence everywhere.

To understand the hypocritical double standard of the current American regime, you absolutely must understand “The War of the Wills,” Chapter 5 in How to Be an Overcomer, and the new America Under Attack. I urge you to order these two books now and see what’s happening in a whole new light.