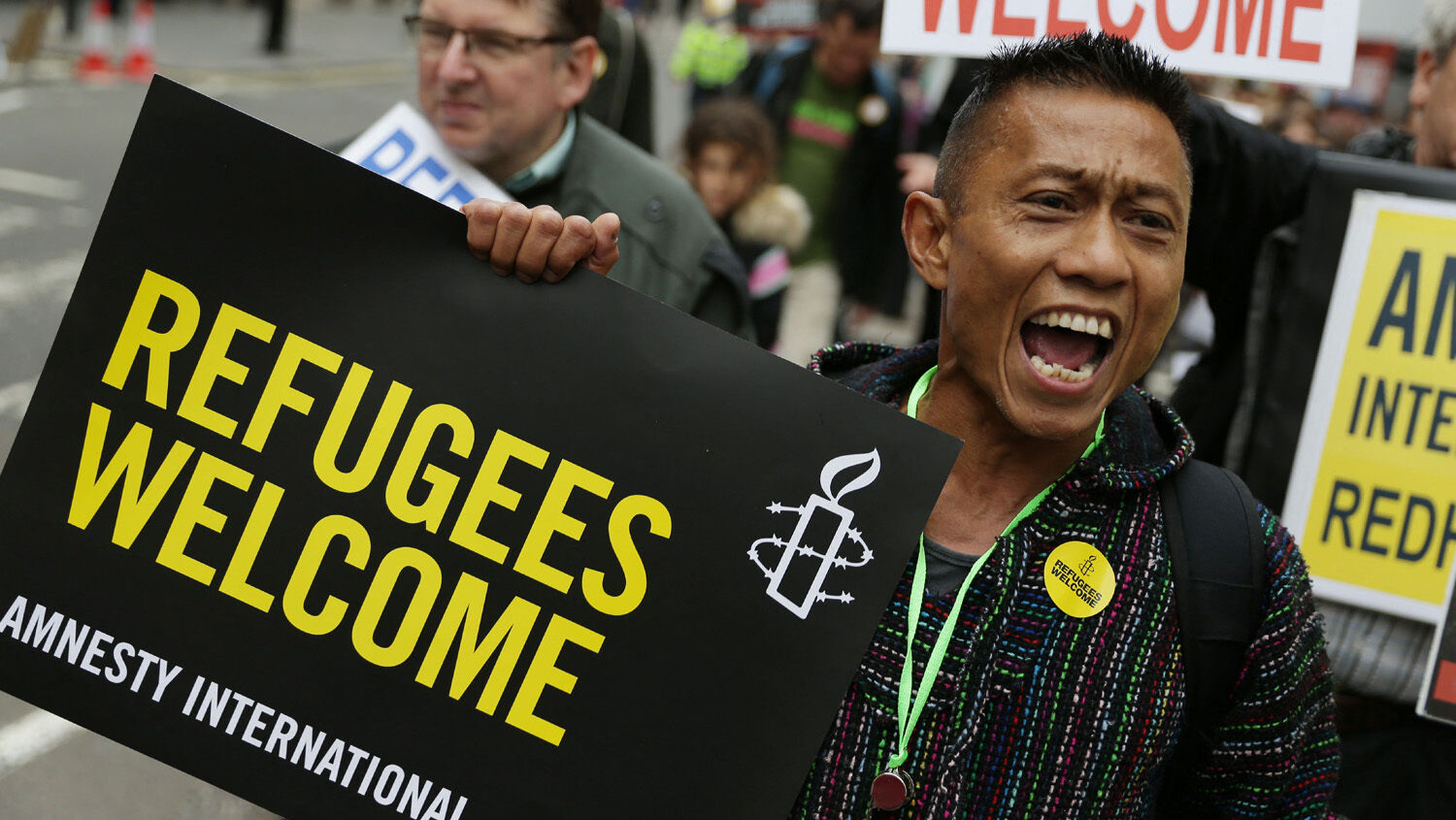 Demonstrators take part in a march calling for the British Parliament to welcome refugees.
DANIEL LEAL/AFP via Getty Images

As migrants pour across America’s southern border, the United Kingdom is struggling with its own migration crisis. A growing number of illegal immigrants are crossing the English Channel in small boats. In 2020, 8,500 came across; that rose to 28,500 last year. Already this year they’re coming across at double the rate they did in 2021.

Once here, they stand very little chance of being sent back. In the year ending September 2021, just 2,500 were deported—the lowest number on record.

These are not people fleeing war, famine or disaster. They’re fleeing France. And much as I like to make fun of it, France is hardly a disaster zone.

The root of the failure to cope with migration lies in human rights legislation. The average wait time for an asylum application is 4½ years. But if you’ve been “in a relationship” (not necessarily married) to someone in the UK for two years, in general, you’ll no longer be deported—because of your “human right” to family life. Get yourself a girlfriend in the first couple of years of your stay and you’re mostly immune from being kicked out.

That’s just one avenue to avoid being deported, out of a great many. Human rights legislation has prevented terrorists from being deported—because they could face torture in their own country. It has kept criminals in the UK. One alcoholic managed to avoid deportation by claiming that if he was sent back to Libya, he’d be in trouble with the law if he was caught indulging his addiction.

Human rights in the UK is clearly broken. They’ll save a terrorist from deportation, but completely fail to prevent the government putting the entire country under house arrest over covid-19.

A proper solution would fix the human rights law and tow the migrants straight back to France. And the government is working to sort the UK’s human rights laws. But in the meantime, it came up with a work-around: Illegal immigrants claiming to be fleeing to the UK for safety would be given a safe home in Rwanda. Their asylum would be processed there.

It was an expensive way to cut through the Gordian knot created by human rights laws, though it dealt with the migrant problem in a humane way. But it never got off the ground—literally. As the first plane to take migrants to Rwanda was about to take off, European judges grounded it.

But I thought Britain left the European Union, you may be thinking. We did. But Europe’s control over us lingers through the European Court of Human Rights (echr).

The echr predates the EU, so is not part of it. But the EU is now a signatory of the European Convention on Human Rights, as is every single one of its 27 members. Several key EU treaties reference the convention. And the judges on the echr rule in a similar spirit to the bureaucrats who run the EU.

The echr has a backlog of over 10,000 cases, yet somehow, they found time to rush through Britain’s.

The court granted several requests for an “urgent interim measure to the UK government” banning the flights. The court says it uses these measures “only on an exceptional basis” when there is an “imminent risk of irreparable harm.”

The biggest risk of irreparable harm here comes from the loss of control over the UK’s borders. We’re quickly becoming a country from which no one can be deported—legally obliged to take in everybody or anybody who arrives on our shores, regardless of their background, their danger to others, or our ability to host them.

But it also raises even bigger questions about who runs the country. “At stake is nothing less than the question of who runs Britain,” wrote the Daily Mail. “Are we still a democratic and sovereign nation, whose elected representatives make our laws and can be cast out by us when they get things wrong? Or are we forever to be subject to the arbitrary impulse of a court of foreign judges, over whom we have no say?”

The case brought to my mind the words of Herbert W. Armstrong, who wrote that the day Britain joined the European Union, Monday, Jan. 1, 1973, would be a “a most tragically historic date—a date fraught with ominous potentialities!”

Britain had already signed up to the European Convention on Human Rights by then. But the echr’s judicial activism began much later. And Britain’s spirit of signing over all power to European authorities meant we meekly went along.

The human rights legislation prevented the deportation of many immigrants from poorer countries, so refugees both real and so-called began pouring in from the Middle East and North Africa. During the 1990s and 2000s, Labour governments deliberately turned the flow into a flood. In 2004, 10 new member states, mostly poorer countries, joined the EU. Most member nations closed their borders to these new member states to protect their own workers. Britain was one of only three nations that threw its borders wide open. Andrew Neather, a speechwriter for Tony Blair and other senior Labour leaders, said his party had a “deliberate policy … to open up the UK to mass migration” and wanted to “rub the right’s nose in diversity.”

Britain now absorbs about 1 million people every three years. That’s the equivalent of one large city arriving annually. Well over a quarter of all births in England and Wales are to mothers born outside the UK. One in five elementary schoolchildren don’t speak English as a first language. In 2,000 schools, the majority don’t speak English as a first language; and in 200 schools, 90 percent do not.

As the migration tsunami was rising, Trumpet managing editor Joel Hilliker wrote, “Instead of producing a stronger, more unified, more harmonious, peaceful and prosperous nation, the diversity cult has done untold damage. … Compulsory multiculturalism has created ghettos, fragmented British society, and empowered the most dangerous and radical of ideologues” (Feb. 18, 2008).

But these “ominous potentialities” did not immediately end the day Britain voted to leave the EU. The damage is still being done.

Mr. Armstrong made this forecast because he knew in joining the EU Britain was shackling itself to an empire with a fundamentally different worldview and a different direction.

In joining the EU, Britain joined an empire that would be used to punish and harm the nation. It’s why membership proved such a curse, why Britain quit, and why the problems linger.

You can order your own free copy of Mr. Armstrong’s book to learn more about what the Bible says on the future of Britain. Or if you’d like a shorter summary first, you can read my article “The Rise and Fall of an Empire”—that shows how, specifically, the prophecies about Britain have been fulfilled.