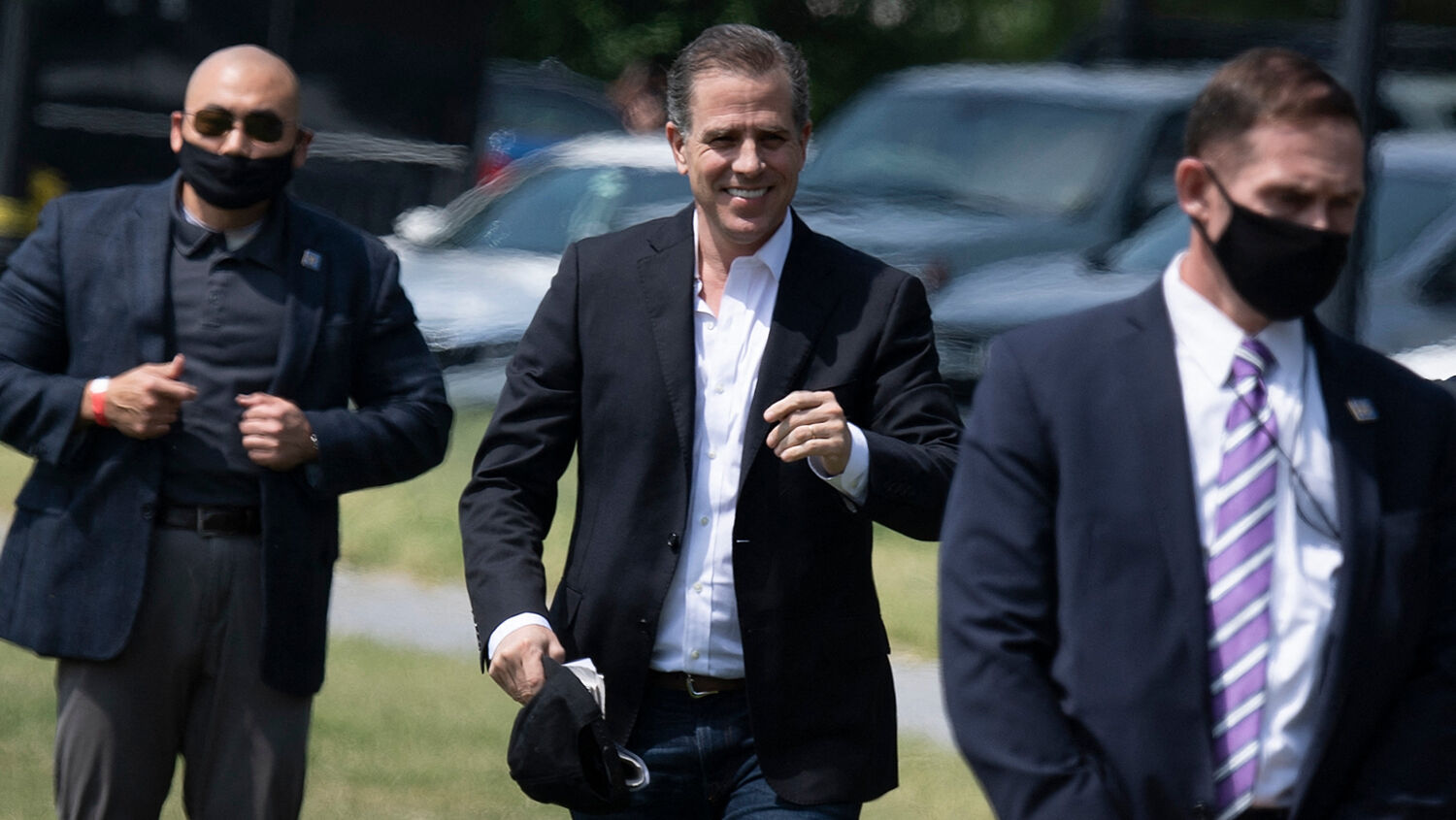 Hunter Biden walks to Marine One on the Ellipse outside the White House May 22, 2021, in Washington, D.C.
BRENDAN SMIALOWSKI/AFP via Getty Images

Is Barack Obama finally pulling the plug on Joe Biden?

What changed? A laptop belonging to a prominent figure emerged. Its numerous photos and messages contained evidence of horrible sexual perversions, molestation, heavy drug usage and selling political power for cash. Not only was this figure prominent, but he was a member of one of the top political families in the entire country. That’s a huge story, no matter who it is, no matter when it happens.

Unless it happens the month before a presidential election. And unless the person living that sordid life is the son of Joe Biden.

Social media executives literally banned people from even talking about it. Legacy media outlets like the New York Times framed it as “Russian disinformation.” Many pretended it didn’t exist.

Now, 17 months later, the Times and others have admitted what was clear well before election night: This is Hunter Biden’s laptop.

Media Research Center, a conservative group, reported last year that out of the 1,750 Biden voters it surveyed, 1 in 6 said they would not have voted for Joe Biden if they had known about the Hunter scandals. But they did not know about them because media executives had suppressed and banned that knowledge.

So is the media pulling the plug on Biden? Just before he died, conservative commentator Rush Limbaugh predicted that “Biden will serve at the pleasure of Barack Obama. If Obama gives the green light to Democrats to take Biden out, there will be ample evidence that Biden has lied about his knowledge [that] his family was selling his name and office with his permission. And if that’s in fact the case, then there’s likely unreported money that will be found. The fake news media will temporarily become hard news media if the decision is made that Biden has to step down. Until that time, they will be covering for Biden, they’ll be making excuses for Biden, they’ll be ignoring all the negatives.”

Barack Obama and the Big Media executives knew about Hunter Biden’s laptop and Joe Biden’s corruption 17 months ago, but they covered it up—not only to get their party in power but so Obama could install a puppet president who would be and now is subject to blackmail. There’s a reason why Biden’s government has been described by the Spectator as “even more Obamaish than the original Obama administration.”

But why choose now to increase the pressure, possibly to the point of terminating Biden’s stay in the White House three years early?

It has to do with an issue even greater than the fact that the current occupant of the White House has a horrid son whom he apparently uses as part of his ongoing sale of political influence to foreign countries like Ukraine and China. It has to do with how that occupant got there in the first place.

A lot of people have overlooked this, but in early March, Project Veritas secretly recorded Matthew Rosenberg, a New York Times award-winning journalist, admitting that the Jan. 6, 2021, protest outside the Capitol was harmless and anything but an organized coup. He said his colleagues at the Times overreacted to the January 6 Capitol protests. We know the reason for that. On the afternoon of Jan. 6, 2021, and thereafter, the media and the radical leftists in the government had to portray that protest as an “insurrection” to force Congress to certify it as legitimate, and to keep Americans believing that it was legitimate—or at least irreversible.

Telling the truth about January 6—and the media’s role in it—puts the spotlight back on the stolen election. And as relevant as Hunter Biden’s dealings and Joe Biden’s corruption are, the way he got to the White House is far more important.

The stolen election is not going away. Now that people are finding out about the Capitol Hill insurrection hoax, Obama and his allies seem to be gearing up to pull the plug on Joe Biden. Yesterday, Obama returned to the White House for the first time since his official presidency ended. Officially, he went to “celebrate the success of the Affordable Care Act and Medicaid,” but it’s hard to believe that is the only reason, or even the main reason, he’s back. Is a Kamala Harris presidency coming?

Donald Trump predicted last year that House Speaker Nancy Pelosi would remove Biden and install Harris if she could, and recent events indicated he may have been right.

Joe Biden denied any unethical behavior related to his son Hunter during his second presidential debate with Donald Trump, but now the legacy media is turning on him. The New York Times is still pushing fake news regarding the Capitol Hill protests. But all of a sudden, it has become “hard news media” regarding Hunter’s corrupt business connections with Chinese, Kazakh, Russian and Ukrainian nationals. Its recent editorial “Hunter Biden Paid Tax Bill, but Broad Federal Investigation Continues” authenticates the reports showing Hunter abandoned a laptop at a Delaware repair shop that contained e-mails highlighting his work with Burisma, a corrupt Ukrainian energy company. And a recent Washington Post editorial, “Inside Hunter Biden’s Multimillion-Dollar Deals With a Chinese Energy Company,” confirms many of the key details previously exposed in a report by the Senate Committee on Homeland Security and Governmental Affairs.

Hunter and his colleagues were experts at setting up shell companies they could use to conduct business with corrupt oligarchs around the world. The laptop should have given investigators all they needed to prosecute him. Yet initially, only the New York Post had the courage to publish this story. Google, Facebook and Twitter censored the Post for doing so, but now even the New York Times is admitting the New York Post was right about Hunter Biden all along.

Hunter lived a life of corruption, while his father covered for him and apparently benefited financially himself. Newsmax’s Chris Salcedo described the sordid situation this way: “Nothing screams immorality like the Bidens. Tara Reade was a Joe Biden staffer in the Senate who credibly maintains that the current occupier in the Oval Office sexually assaulted her back in the day. The debaucherous apple doesn’t fall far from the tree. A laptop from hell belonging to Joe Biden’s son, Hunter Biden, reveals some of the values held by the family that leads the Democrat Party. Aside from poor dental hygiene, the laptop reveals sexual promiscuity and drug abuse. But that is not all it shows. The laptop allegedly contains evidence of the Biden family’s dealings with foreign countries like China, Russia, and Ukraine. Many consider the laptop a revelation that Joe Biden is compromised, ready to sacrifice the safety and security of every man, woman, and child in America in an effort to protect and enrich his crooked son and family, who, in my opinion, and evidence on the laptop suggests, was influence trading to enrich the Biden family.”

It used to be that an individual’s character was the primary consideration in determining whether he was fit to lead—especially to lead the entire nation. My father, Trumpet editor in chief Gerald Flurry, and I coauthored the booklet Character in Crisis in the aftermath of President Bill Clinton’s adulterous affair with Monica Lewinsky, making the case that to our Founding Fathers, character meant everything to the success of the nation and its leadership. But America had strayed far from its founding principles in the time of President Clinton, and it has strayed even further today. Hunter Biden has been involved with prostitutes, drugs, and national-security-destroying business deals. The public had learned about it, but the legacy media refused to report on this story. That is, until it became a good way to distract conservatives and other Americans from ongoing investigations into an even bigger scandal: the role of Obama’s Federal Bureau of Investigation in the Capitol Hill protests.

The Prophet Jeremiah described America today when he wrote: “I have seen also in the prophets of Jerusalem an horrible thing: they commit adultery, and walk in lies: they strengthen also the hands of evildoers, that none doth return from his wickedness: they are all of them unto me as Sodom, and the inhabitants thereof as Gomorrah” (Jeremiah 23:14).

Today, politicians, media moguls, and everyday citizens commit adultery and act like the citizens of Sodom. Then they lie about it and strengthen the hands of Russian oligarchs, Chinese spies and others who want to destroy the nation. In the case of Hunter Biden, the laptop proved the adultery and debauchery. Yet many people did not hear about it for 17 months because of the lies and the cover-up. Even now the media is only telling the truth to strengthen the hand of the fbi agitators who incited violence on Jan. 6, 2021, so that Congress would be too scared to investigate the theft of the 2020 election.

“[W]here is it all leading?” my father and I ask in Character in Crisis. “It is not only the leaders who are sinning. They are ‘as Sodom’ and the ‘inhabitants thereof as Gomorrah.’ Our leaders lead the people into the most disgusting sexual sins of all. It is the grossest kind of immorality. That is the way lust works. A person starts with one lust. It soon fails to stimulate his evil desire. Then he twists his mind to a more disgusting lust—until we have reached Sodom and Gomorrah!”

The Prophet Ezekiel described Sodom this way: “Behold, this was the iniquity of thy sister Sodom, pride, fulness of bread, and abundance of idleness was in her and in her daughters, neither did she strengthen the hand of the poor and needy. And they were haughty, and committed abomination before me: therefore I took them away as I saw good” (Ezekiel 16:49-50).

God is currently exposing the many sins occurring in the White House and the millions of other houses across America, so people have a chance to repent after they see their society as it really is. The Biden administration is a curse on this nation, but if people refuse to examine this curse and repent, then a similar fate awaits them that struck Sodom. Request your free copy of Character in Crisis and watch for God to continue to expose the truth about our leaders’ character.