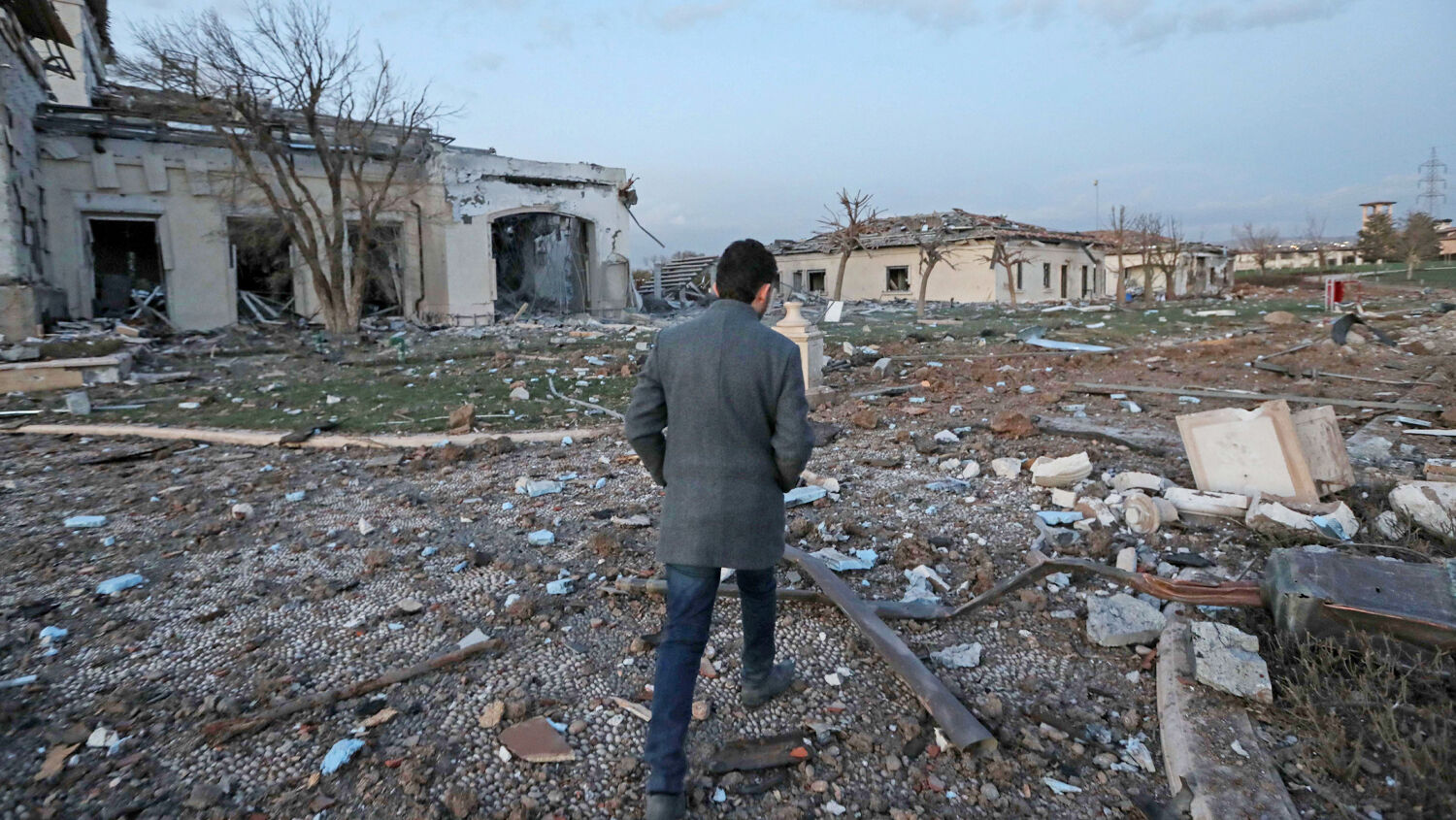 A man walks past damaged mansions following an overnight attack in Arbil, the capital of the northern Iraqi Kurdish autonomous region, on March 13.
SAFIN HAMED/AFP via Getty Images

Shouldn’t Iran be afraid to derail the new nuclear deal?

Iran’s terrorist activities are growing bolder and more aggressive as the conclusion to the new nuclear deal draws closer. On March 13, Iran attacked the northern Iraqi city of Erbil with 12 ballistic missiles. Some of the missiles landed dangerously close to a United States consulate while the majority struck the villa of a Kurdish businessman. There were no deaths and only one civilian injury reported.

What made this attack significant was Iran’s direct involvement. Iran hasn’t launched missiles at targets near U.S. interests in over two years. In January 2020, Iran launched strikes against the U.S. Those strikes were in retaliation for the killing of Iran’s Islamic Revolutionary Guard Corps (irgc) Quds Force leader, Cmdr. Qassem Suleimani.

Typically, Iran cloaks its terrorist activities in the guise of various proxies or militias. With this attack, Iran claimed full responsibility. Iranian state media said the attack was retribution for Israeli air strikes that killed two irgc members in Syria. The irgc also issued a statement, warning that “any repetition of attacks by Israel will be met with a harsh, decisive and destructive response.”

In addition to this brazen attack, Iran’s proxy in Yemen, the Houthis, have also been ramping up their attacks against the Saudi-led Gulf coalition. On March 25, the Houthis launched several drone and missile attacks on at least six sites across Saudi Arabia.

According to Saudi state media, the coalition foiled most of the attacks while Saudi air defenses intercepted one missile. Not all of the attacks were stopped, however. One missile attack managed to reach its target: the Aramco petroleum facilities in Jeddah. Two oil storage tanks were struck, causing them to erupt into towers of fire and black smoke that could be seen for miles.

The Saudi Energy Ministry placed the blame for the attack squarely on Iran’s shoulders.

“In many cases, Iran uses complex smuggling and procurement networks to provide more technologically advanced parts that the Houthis then combine with other locally acquired or produced ones,” wrote Thomas Juneau, a former policy officer with Canada’s Department of National Defense. “They assemble these parts into working weapons with technical assistance from Hezbollah and Islamic Revolutionary Guard Corps advisers. This approach has allowed the Houthis to now field short- and long-range drones and an increasingly diversified fleet of missiles capable of striking deep inside Saudi Arabia.”

With a new nuclear deal all but inevitable, many in the Middle East are growing worried. The new deal clears a path for Iran to acquire nuclear weapons in 2½ years. Add into the mix the potential removal of the irgc from the Foreign Terrorist Organization list, and it becomes easy to see the reason for their concern.

In what appears to be an attempt to ease some of those worries, the U.S. imposed sanctions on Mohammed Ali Hosseini and his network of companies. The U.S. Treasury Department accused him of procuring missile propellant-related material for the irgc.

While these new sanctions look good on paper, they’re ineffective, worthless and amount to little more than political theater. If America were actually committed to curbing the irgc’s belligerence, there’s a lot more it could do than sanction a low-level “procurement agent.” Worse still, the Biden administration isn’t fooling anyone. “[W]hen the Biden administration is trying to deceive the Arabs and sell them false promises about restraining the irgc in the region, this arouses contempt and scorn,” wrote Kurdish journalist Nezar Jaff.

The growing Iranian threat was at the heart of an unprecedented meeting held in Sde Boker, Israel. The foreign ministers of four Arab countries, Israel and the United States met to discuss various issues, but the main focus was Iran. Prof. Eytan Gilbao, an expert on U.S.-Israel relations, told Jewish News Syndicate that the goal of the Israeli and Arab side was “to show unity and tell [U.S. Secretary of State Antony] Blinken that America is making a huge mistake” with the nuclear deal.

Unfortunately, Blinken wasn’t interested in addressing Iran’s aggression. He came with an entirely different goal in mind. “America’s purpose in attending was ‘to show involvement, to reduce criticism over the pending Iran deal,’” Gilbao said.

With the promise of sanctions relief on the line, why are Iran’s leaders willing to risk torpedoing the nuclear deal with their aggression?

“Over the past few months, Iranian attacks on U.S. interests have become increasingly brazen while America’s response has been no more than a feeble slap on the wrist,” wrote British journalist Melanie Phillips. “In response to American weakness, Iran contemptuously upped the ante in the Vienna talks, to which the Biden administration cravenly offered it more and more concessions.”

The mullahs know the Biden administration is desperate for a deal and is willing to pay any cost to make it happen. That is why Iran ships untold tons of missiles, drones, explosives and small arms to its terrorist proxies around the region. That is why Iran pursues ever more advanced ballistic missile technology. And that is why Iran does not fear U.S. retaliation.

As American power and prestige diminishes in the Middle East, a dangerous power vacuum is being left behind. Iran is pushing to fill that vacuum and crown itself the nuclear-armed king of the Middle East.

Iran’s rise at the expense of America is exactly what the Trumpet has forecast for over three decades. In his free booklet The King of the South, Trumpet editor in chief Gerald Flurry links American, British and Israeli weakness with the rise of Iran to regional dominance. “Little Israel has more military might than Iran but fears to use it. The same is the case with Britain. And certainly that is true of America. But our nations fear to use their power—because of our sins. The ‘pride of [our] power’ has been broken! We simply lack the will to sustain our war against terrorism.”

Mr. Flurry then explains where Iran’s aggression is ultimately leading: “The blatantly bold and aggressive foreign policy of Iran must lead to war. It will either conquer or be conquered. Bible prophecy makes it clear that Iran will be conquered—but not at the hand of America and Britain.”

Who will finally conquer Iran? Look no further than a remilitarizing Germany. “And at the time of the end shall the king of the south push at him: and the king of the north shall come against him like a whirlwind, with chariots, and with horsemen, and with many ships; and he shall enter into the countries, and shall overflow and pass over” (Daniel 11:40). Mr. Flurry explains in his booklet that radical Islam, led by Iran, is this “king of the south” and a united, German-led Europe is “the king of the north.”

The stage is set and the characters are almost ready. Iran grows more “pushy” by the week, and Germany is rapidly remilitarizing to the applause and adulation of the world. How will this end? Thankfully, it will not end in tragedy. If you haven’t already, please request your free copy of The King of the South to learn the happy, hope-filled ending.