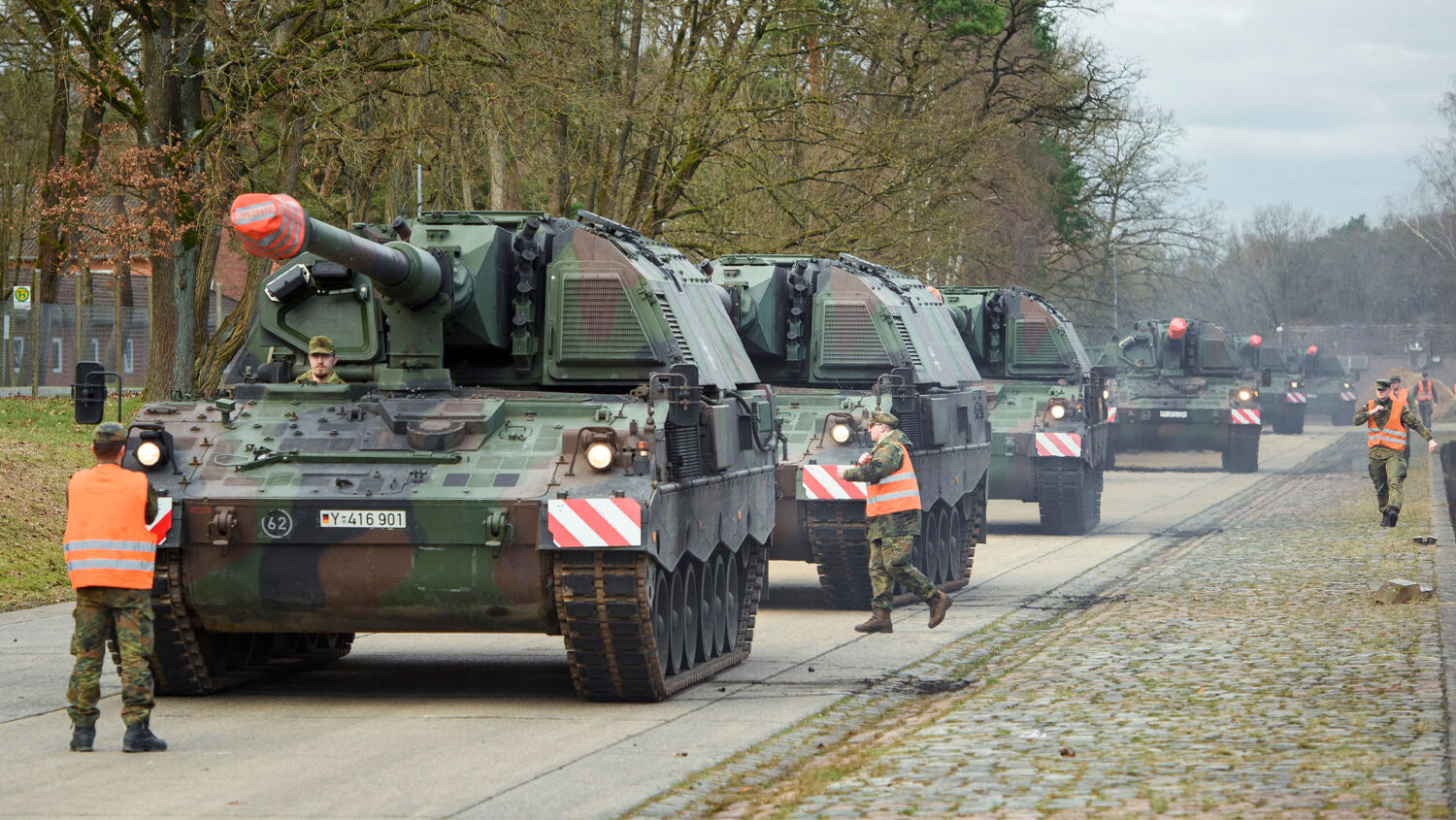 Tanks with mounted howitzers of the German armed forces Bundeswehr are driven to the loading area in the Hindenburg barracks in Munster on February 14.
REGOR FISCHER/AFP via Getty Images

As people are talking about the possibility of another world war, the Biden regime is helping build Germany into a superpower once again.

Germany is rearming! German Chancellor Olaf Scholz has announced that his nation will triple its defense budget. This will include purchasing 35 new fighter jets from the United States, stealth F-35s capable of carrying American nuclear weapons that are currently stored in Germany and other European nations. Russia’s war on Ukraine, which prompted the announcement, has been called “Germany’s Pearl Harbor” by Forbes. The world is applauding the idea of Germany waking up its latent power, as the United States did to win the last world war.

YouTube banned the interview, citing his mentioning of the 2020 election steal. Yet it still got 5 million views on Rumble. People are eager to hear what Trump has to say. His is one of the few voices saying that while Germany should spend 2 percent of its economic output for defense against Russia, it is dangerous to let Germany spend much more than that, lest Eastern Europe find itself caught between a powerful Russian dictatorship on one side and a powerful German dictatorship on the other.

At the end of the last world war, in 1945, British Prime Minister Winston Churchill and U.S. President Franklin Roosevelt signed a document to prevent Germany from ever becoming a war machine again. Their statement from the Yalta Conference said, “It is our inflexible purpose to destroy German militarism and Nazism and to ensure Germany will never again be able to disturb the peace of the world.”

Yet 77 years later, the world is cheering for Germany to become a military superpower capable of standing up to Vladimir Putin. This goes far beyond asking Germany to spend 2 percent of its economic output to help nato defend Europe from Russia. This is Germany spending 5 percent of its economic output and buying F-35s capable of carrying nuclear payloads. This is Germany tripling its military budget for its own motivations—motivations, it should be noted, that recently included pushing through an anti-U.S., anti-Europe pipeline deal with Russia and that, to this day, include blocking meaningful sanctions against Russia and meaningful aid to Ukraine.

What insane foreign policy the U.S. is engaging in. The Biden administration is helping transform Germany into a nuclear-powered superpower less than a century after the literal Nazis of the Third Reich tried to conquer Europe and the world.

The late Herbert W. Armstrong predicted this would happen 40 years ago. “Now one of the great things that is urging Europe on, and perhaps the greatest thing that will cause them to hurry and get together on this, is their fear of what’s going on in the Kremlin and the Soviet Union,” he said in a 1982 lecture. “They are losing confidence in the United States as having a military umbrella over them to protect them, and they want their own military force to protect themselves. That’s the way they feel over there. Now that is a chief incentive to unite them and that is taking place.”

The rise of the Holy Roman Empire was Mr. Armstrong’s signature prophecy. Based on Bible passages like Isaiah 10:5-6, Matthew 24:21-22 and Revelation 17:10-13, Mr. Armstrong taught that Germany would first build up a great military to defend itself from Russia, then use the nuclear bombs America has stored in Europe against not Russia but the United States. This is happening before our eyes as the Biden administration sells Germany U.S.-made nuclear-capable F-35s.

“When we talk about European nations with nuclear weapons, we usually think of Britain and France,” my father, Trumpet editor in chief Gerald Flurry, wrote in 2014. “But there are five other nations with nuclear bombs, bombs that technically belong to America. In Belgium, the Netherlands, Italy, Germany and Turkey, the United States has about 150 to 200 thermonuclear bombs. … America designed those hundreds of bombs to mount to planes in their host country. In a Dec. 2, 2009, article titled ‘What to Do About Europe’s Secret Nukes?’ Time wrote, ‘Twenty years after the fall of the Berlin Wall, Dutch, Belgian, Italian and German pilots remain ready to engage in nuclear war’ (emphasis mine throughout). That’s right, Germany and Italy—America’s bitter enemies in World War ii—are ready to wage nuclear war with bombs that belong to the United States! … Those weapons could conceivably be turned back on America!”

Other than Donald Trump, few modern politicians see the risk of arming Germany with advanced warplanes that can carry advanced nuclear weapons.

German Left Party spokesman Ali al-Dailami is one of these few as he recently warned that F-35s in Germany would “fuel the risk of nuclear war in Europe.” But most other politicians are so blinded by the threat posed by Vladimir Putin that they cannot see the threat posed by Germany or Europe. Yet here at the Trumpet, we recognize the threat posed by a nuclear-armed Germany because we understand what the Bible says about end-time Germany.

Today, under Biden and the power behind the scenes, Barack Obama, the U.S. is helping arm another German superpower. This iteration will lead the prophesied seventh and final resurrection of the Holy Roman Empire (Revelation 17:10-13).

A sobering prophecy in Ezekiel 23 shows that end-time Israel (America and Britain primarily) will not be conquered by a belligerent rival like Russia or China. Rather it will be betrayed by a perceived ally: modern-day Assyria, aka the Germans.

“The word of the Lord came again unto me, saying, Son of man, there were two women, the daughters of one mother: And they committed whoredoms in Egypt. … And the names of them were Aholah the elder, and Aholibah her sister: and they were mine, and they bare sons and daughters. Thus were their names; Samaria is Aholah, and Jerusalem Aholibah” (verses 1-4). These two sisters, Aholah and Aholibah, symbolize the northern kingdom of Israel (America and Britain today), and the southern kingdom of Judah (the Middle Eastern nation of Israel). Both sisters stop trusting God and instead turn to modern-day Germany for protection, but they are betrayed by their lovers when they least expect it.

“And Aholah played the harlot when she was mine; and she doted on her lovers, on the Assyrians her neighbours, Which were clothed with blue, captains and rulers, all of them desirable young men, horsemen riding upon horses. Thus she committed her whoredoms with them, with all them that were the chosen men of Assyria, and with all on whom she doted: with all their idols she defiled herself” (Ezekiel 23:5-7). America does not trust God for protection, nor does it have the willpower to protect nations like Ukraine. Instead, we sell F-35s to Germany to protect us.

America is creating the Frankenstein monster that will turn and destroy us because we refuse to trust God and follow His laws. The biggest development from Russia’s war on Ukraine may not have anything to do with Russia or Ukraine. It might be a nuclear-armed German superpower!