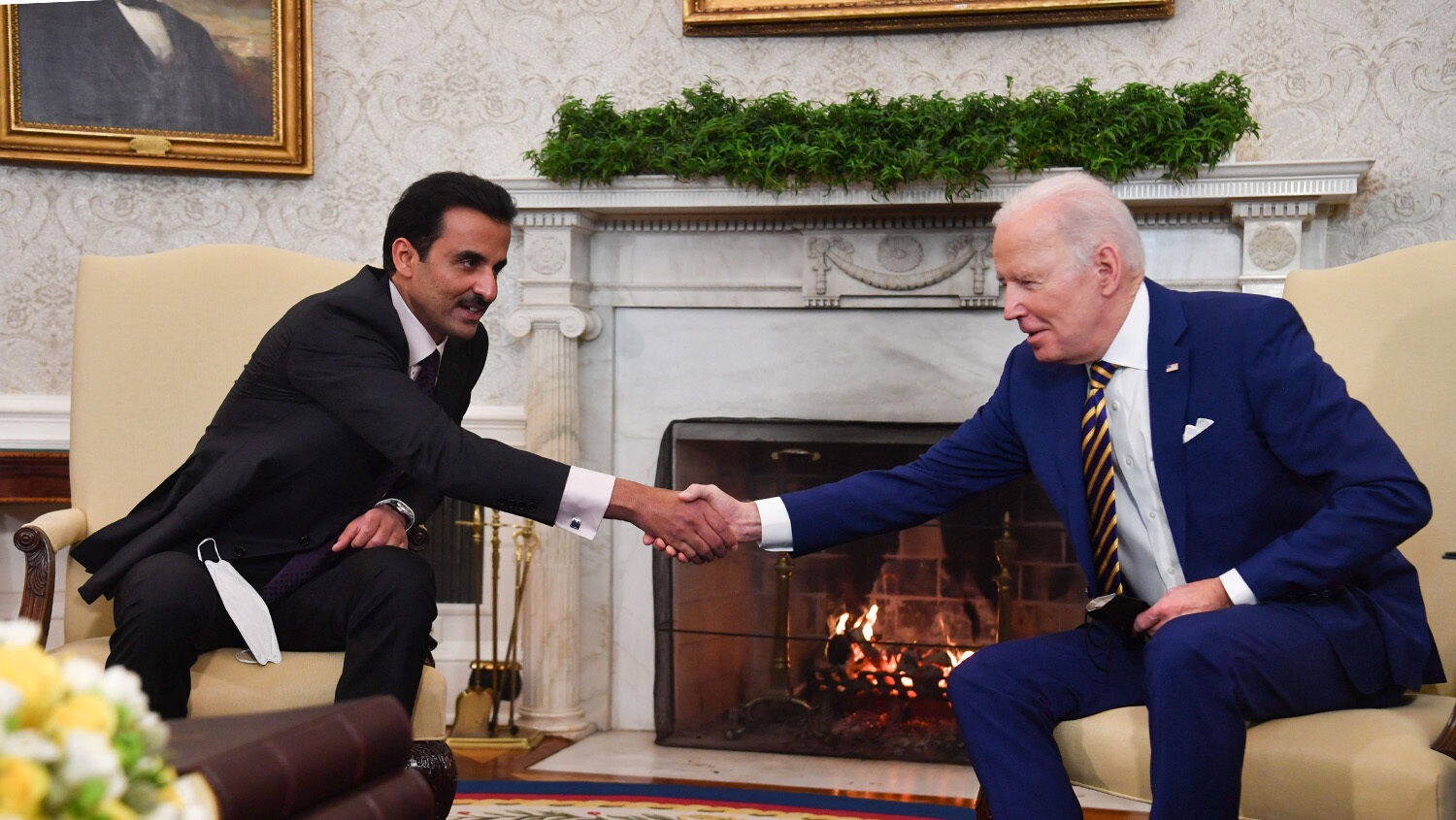 Joe Biden participates in a bilateral meeting with His Highness Sheikh Tamim Bin Hamad Al-Thani, Amir of the State of Qatar in the Oval Office of the White House on January 31, 2022 in Washington, DC.
NICHOLAS KAMM/AFP via Getty Images

Why is Joe Biden drawing closer to one of the world’s main sponsors of terrorism?

In February, the Biden administration upgraded relations with a nation that has supported virtually every anti-American Islamic terrorist organization. Yigal Carmon, founder and president of the Middle East Media Research Institute, told the Jewish News Syndicate that if it weren’t for this nation, “the September 11 attacks might not have taken place.”

Which terrorist-sponsoring nation did Joe Biden choose to honor with closer relations? “Qatar is a good friend and a reliable and capable partner,” Biden said in the announcement. “And I’m notifying Congress that I will designate Qatar as a major non-nato ally to reflect the importance of our relationship. I think it’s long overdue.”

What does it mean for Qatar to be a “major non-nato ally”? And has Qatar truly earned such a prestigious upgrade in its relationship with the United States?

The U.S. Department of State defines the “major non-nato ally” designation as “a powerful symbol of the close relationship the United States shares with those countries and demonstrates our deep respect for the friendship for the countries to which it is extended.” This designation is not merely political theater. It grants Qatar many important political and military privileges. Some of these include the ability to buy depleted uranium ammunition, priority in purchasing surplus military equipment at a reduced price, the opportunity of joint military training exercises, opportunities for joint research and development, and more.

“The relationship between Qatar and the United States is bizarre, and makes no strategic sense,” Carmon said. Why? Because of Qatar’s extensive history supporting radical Islamic terrorism.

Qatar has demonstrated its “friendship” by supporting a list of anti-American groups including al Qaeda, Hamas and the Islamic State, just to name a few. Apart from Iran, few other nations have supported radical Islamic terrorism and opposed American interests more than Qatar.

In his book Warnings, Richard Clarke, former National Coordinator for Security and Counterterrorism for both the Clinton and Bush administrations, recounts the failed 1996 attempt to apprehend Khalid Sheikh Mohammed, the man who would ultimately mastermind the 9/11 attacks. By 1996, the international community considered Khalid to be the most dangerous terrorist alive. U.S. intelligence located him in Qatar where he was being given a patronage job in the Doha Water Department. Hours after the U.S. ambassador met with Qatar’s emir requesting for his apprehension, Khalid disappeared. Shortly thereafter, the Qataris informed the U.S. that they believed he had left the country.

Khalid “went on to organize the 9/11 attacks, the Bali bombing in Indonesia, the murder of U.S. journalist Daniel Pearl, and other attacks,” said Clarke. “Had the Qataris handed him over to us as requested in 1996, the world might have been a very different place.”

One of Qatar’s biggest and most well-connected charities is the Qatar Charity (formally the Qatar Charitable Society). It has been accused of funding terrorism on many occasions. A 2002 federal terrorism case cited the charity in helping to fund Osama bin Laden’s al Qaeda throughout the 1990s. A March 11, 2003, hearing before a U.S. House of Representatives subcommittee found the charity guilty of laundering money for bin Laden.

In September 2001, the same month as the 9/11 terrorist attacks, the Qatar Charitable Society published this headline in its official newsletter: “Jihad Is the Solution!” A more recent article on the charity’s website said, “Charity is also in the public interest of Muslims, such as building mosques where they are needed, and spending in the field of jihad for the sake of Allah Almighty.”

Beyond helping to fund terrorism, Qatar has sheltered several jihadi terrorist leaders; allowed its government-run television broadcaster, Al Jazeera, to be used as a mouthpiece and recruitment tool for terrorist organizations; and propped up the Taliban, ensuring its fighters were paid better than the U.S.-funded Afghan National Army. Carmon also noted that “Qatar funded the Taliban throughout America’s presence in Afghanistan.”

Qatar’s ongoing support for the Brotherhood and other extremist groups was at the heart of a diplomatic crisis for Qatar. In June 2017, several Arab countries including Saudi Arabia, the United Arab Emirates and Egypt cut diplomatic ties with Qatar. Both sides have since reached a formal reconciliation mending relations. The underlying issue of Qatar’s support for radical terrorism, however, remains unaddressed and unresolved.

This is only scratching the surface on the veritable mountain of evidence exposing Qatar’s diplomatic duplicity. Ironically, one of the privileges now afforded Qatar is the opportunity to take part in counterterrorism initiatives.

As Carmon said, to give Qatar the designation of “major non-nato ally” from a foreign-policy perspective makes absolutely no sense. Is this incompetence? Naivety? Or is it part of something altogether more treacherous?

In the October 2021 cover story of the Trumpet, “This Isn’t Incompetence. This Is Treason!”, editor in chief Gerald Flurry explained that the disastrous foreign policy of the Biden administration has been a continuation of Barack Obama’s policy.

“I have written extensively on how, for eight years, the Obama administration was working dangerously against America’s interests—and why,” Mr. Flurry wrote. “President Obama empowered Islamists in many ways. In Egypt, he helped oust President Hosni Mubarak from power and supported the Muslim Brotherhood. He allowed America’s outpost in Libya to be overrun by jihadis, who killed a U.S. ambassador and several soldiers. Most importantly, he empowered the most extreme elements within the world’s number one terrorist nation, Iran.”

Currently, the world stands on the cusp of a revived nuclear deal with Iran that is even worse than the original. In August 2021, Joe Biden presided over the American surrender of Afghanistan to the Taliban. Mr. Flurry called it “the worst foreign-policy disaster in the nation’s history.” Now, Biden has extended “a powerful symbol” of friendship to the country that helped to fund and prop up the very Taliban that turned the U.S. into a laughingstock.

Why would Barack Obama, and now Joe Biden, deliberately enact such catastrophic foreign-policy decisions? Mr. Flurry continued, “Many people can see that these are disastrous decisions. But we must understand that this isn’t simply the result of the ineptitude on the part of this administration, or naivety about how the world really works. We are seeing the aftereffects of a calculated, aggressive, satanic attack aimed at weakening and ultimately destroying the nations of Israel, starting with the world’s most powerful nation!”

There is a terrible spiritual reality behind what is happening in America: “Satan the devil is working to bring down America,” Mr. Flurry said.

If you want to learn more about Satan’s ongoing attack on America, please request a free copy of Mr. Flurry’s booklet America Under Attack.