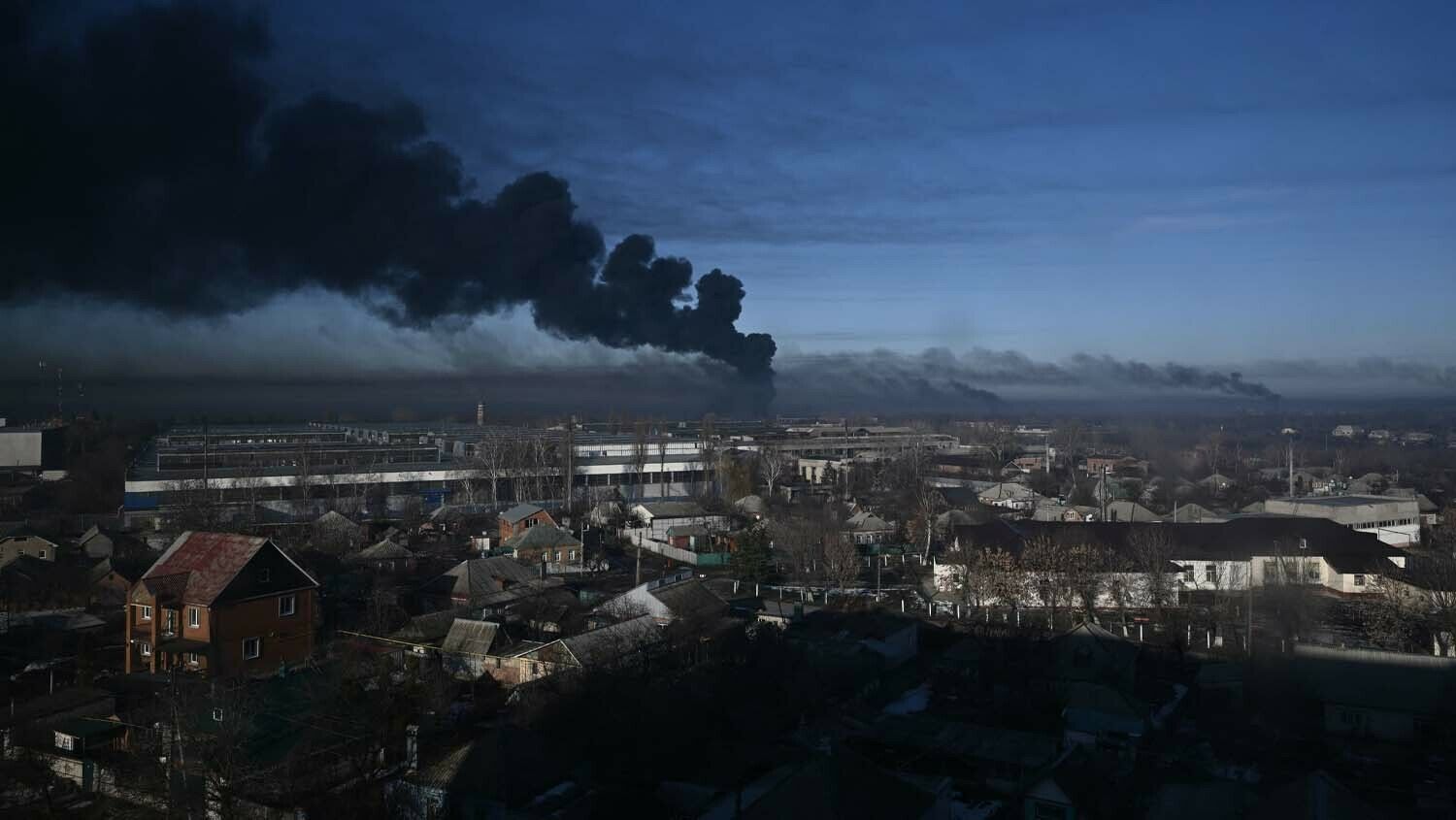 Black smoke rises from a military airport in Chuguyev near Kharkiv on February 24.
ARIS MESSINIS/AFP via Getty Images

Were you shocked by Russia’s invasion of Ukraine? A lot of world leaders were. They thought this kind of war was impossible.

“We now have war in Europe, on a scale and of a type we thought belonged to history,” said nato Secretary General Jens Stoltenberg. The New York Times’s Thomas Friedman called Russia’s invasion “a raw, 18th-century-style land grab” and “a throwback to earlier centuries.”

“This morning feels like a movie—but I can’t press the ‘off’ button,” wrote one resident of Kyiv as her city came under attack.

The violence in Ukraine is unbelievable; it feels unreal. Many of the statements on this war contain an implicit assumption about human nature—that it is improving, evolving. In the 18th century, we were more primitive, savage and barbaric; Vladimir Putin’s invasion is a throwback to a less sophisticated era. Today we’ve evolved past that kind of behavior.

That kind of thinking reflects a deadly error. And while I would quickly disagree with any kind of statement that human nature is good or improving, my own reaction to the Ukrainian invasion shows I’ve fallen victim to some of that kind of thinking. Have you?

In October, I thought there was a good chance Putin would invade Ukraine. But as time wore on and his troops remained on the border, I thought an invasion was less likely. Why wait? Why give up the element of surprise? By giving Ukraine time to dig in, Putin was making a quick, relatively bloodless victory unlikely.

Russia is dramatically more powerful than Ukraine. But after Turkey, Ukraine has the largest army in Europe. A full-scale invasion, after Ukraine had time to prepare, would be costly, both to Russia and to civilians. Would Putin really be willing to pay that kind of price, especially when he’s proved so good at quietly and gradually taking over countries?

Putin was willing. And I realize I was a victim, in part, to the same kind of thinking displayed by those liberals who believe full-scale war is a relic of a bygone age. He was far more willing to take on mass casualties than I thought.

The fact is, people have thought war was a thing of the past for centuries. At the end of the 18th century, experts thought large-scale war was over. Generals had grown so scientific and sophisticated they would no longer engage in bloody struggle. Instead, before a battle was fought, it would be clear who was in the better strategic position and, therefore, who would win. The soon-to-be-loser would recognize this reality and retire. Wars could be fought with strategy and little loss of blood.

Then the French Revolution and Napoleon Bonaparte launched two of the bloodiest decades in European history.

In 1913, Norman Angell produced his famous book The Great Illusion, arguing that international commerce and modern sophistication made war obsolete. Then came the most destructive war the world had known to that point. That war, in turn, was to be the war to end all wars—until World War ii came around.

Why do we make this same mistake over and again?

“There is a tendency to look upon peace as normal and war as abnormal,” wrote international relations expert Nicholas J. Spykman, “but this is because of an intellectual confusion resulting from emotional reactions to war. War is unpleasant, but it is an inherent part of state systems composed of sovereign independent units. To forget that reality because wars are unwelcome is to court disaster. War has been a constant phenomenon in international relations in all periods of history.”

That is part of the answer. But a deeper truth is that we consistently underestimate the evil of human nature.

Another international relations scholar, Hans J. Morgenthau, was even closer to the mark, when he wrote: “The human mind in its day-by-day operations cannot bear to look the truth of politics straight in the face. It must disguise, distort, belittle and embellish the truth—the more so, the more the individual is actively involved in the processes of politics, and particularly in those of international politics. For only by deceiving himself about the nature of politics and the role he plays on the political scene is man able to live contentedly as a political animal.”

If we look at the world and say, Mankind is basically good; we’re figuring out how to avoid wars and improving our society, we’re also telling ourselves, I am good; I have a good heart! If we say, Man has a fundamentally flawed nature and is completely incapable of living in peace, we’re also acknowledging that we are flawed and evil, and incapable of living good lives on our own effort.

And so the almost irresistible pull is to try and convince ourselves, against all the evidence, that this world is good, that we’ve figured out the way to peace and banished large-scale war to the history books.

Jeremiah 17:9 puts this truth even more plainly: “The heart is deceitful above all things, and desperately wicked: who can know it?” The phrase “desperately wicked” would be better translated dangerously sick, incurably sick or sick unto death. Human nature is evil, this verse tells us. In fact, it is so evil we are incapable of understanding that evil without God’s help.

“Trusting sick human minds is why we live in such a sick, sick, sick world!” writes Trumpet editor in chief Gerald Flurry in his booklet Jeremiah and the Greatest Vision in the Bible. “The frightening evidence is all around us. Avoiding human annihilation is our number one problem! (Matthew 24:21-22). That one problem should reveal how sick the human mind is.” Instead, we convince ourselves that this isn’t a problem—that we’ve got war and peace sorted out.

“We must see the evil in human nature, or we can never solve our problems,” he writes. “That is where man’s false hope lies—in an incredibly deceitful mind that is terminally ill!”

This problem of underestimating human nature doesn’t just crop up in statesmen, educators and commentators in the world; many in God’s Church have also made the same mistake.

Daniel 7 describes the major world-ruling empires that have dominated history. It typifies these empires as “beasts.”

A writer for God’s Church many years ago referred to them as “wild animals.” But this seriously waters down what the Bible says. Mr. Flurry writes in Daniel Unlocks Revelation that “even a deer or antelope is a wild animal. God calls them beasts—with the jaws and teeth of a lion, and the fierce claws of a bear, and the lightning-strike swiftness of a leopard!”

“These are dreadful beasts that conquer and enslave entire nations,” he continues. “It’s what these beasts do. But biblical Israel likes to think of them as harmless wild animals. Our nations do that because of their broken wills. They fear to face the extremely unpleasant truth. However, it is only a matter of time until they must do just that. The only way these beasts go away is when they themselves are conquered.”

Even many in God’s Church won’t believe this. “They will keep saying, ‘They’re peace-loving people,’ until they are devoured!” writes Mr. Flurry. “That’s what these beasts do. It’s their nature.”

The last week has brought this passage vividly to life. We live in a world of beasts. Vladimir Putin cares little about flattening cities; he already did that in Chechnya many years ago. If we really understand this lesson, we should not have been surprised by anything over the last week. These events have made me realize I haven’t learned this lesson deeply enough. Have you?

Meanwhile Germany is rapidly rearming, to the applause of the whole country and the whole world. The Bible tells us that this is another beast rising up. Daniel 7:7 calls it “dreadful and terrible, and strong exceedingly.” Even Germany’s history sounds a warning. Yet almost no one hears it.

The last 70 years have been relatively peaceful, but not because we’ve solved war or improved ourselves. It’s because of God’s blessings (you can read more about that in our book The United States and Britain in Prophecy, by Herbert W. Armstrong). Instead of thanking God for this peace, however, we’ve taken credit for it and convinced ourselves that peace is now normal.

We have been protected in this country for a couple hundred years. We have not experienced the turmoil that many other nations have. Yes, we were involved in two world wars, but God has given us a lot of peace. As a result, our people have settled into an unreality about what is really happening around us. They don’t understand how deadly dangerous this world is!

This is not God’s world. There is a lot of evil in this world. It is full of tigers waiting to tear people apart. It has always been that way. As Winston Churchill said, the history of man is the history of war. Yet somehow we can’t come to grips with that today.

Are you willing to face reality? Most people are not. A haze of deception enshrouds our world. It is absolutely stunning how easily the people in this land today are duped.

Sadly, even after Ukraine, few will wake up. Most will tell themselves Vladimir Putin is one bad man, but overall we’re good and we’ve fixed our problems.

Jesus Christ Himself prophesied of this age: “Ye shall hear of wars and rumours of wars” but these are merely “the beginning of sorrows” (Matthew 24:6-8).

The conflict in Ukraine could soon get a whole lot worse. More conflicts are coming. God is allowing it. Why? Because we won’t truly turn to God until we realize how sick and evil the human mind is.

Mr. Flurry writes in his Jeremiah booklet that understanding Jeremiah 17:9 “is more important than any education in this world.”

“When we understand it, radical action is necessary,” he writes. “The greatest need is to understand God—to let Him reveal our own sickness and heal it.”

Man’s evil heart is going to lead him into even worse catastrophes. But as Mr. Flurry writes, understanding our own evil “is where mankind must begin if we are ever to have hope. There is no hope in man. There is endless hope in God.”

There is a solution to war. But it’s not in trade, treaties or organizations like the United Nations. It’s in following Jeremiah’s example, recorded a few verses later, in saying: “Heal me, O Lord, and I shall be healed; save me, and I shall be saved” (verse 14).

Man’s problems will get worse until he finally turns to God. And then God will bring healing to the whole world, ushering in a time of real peace.