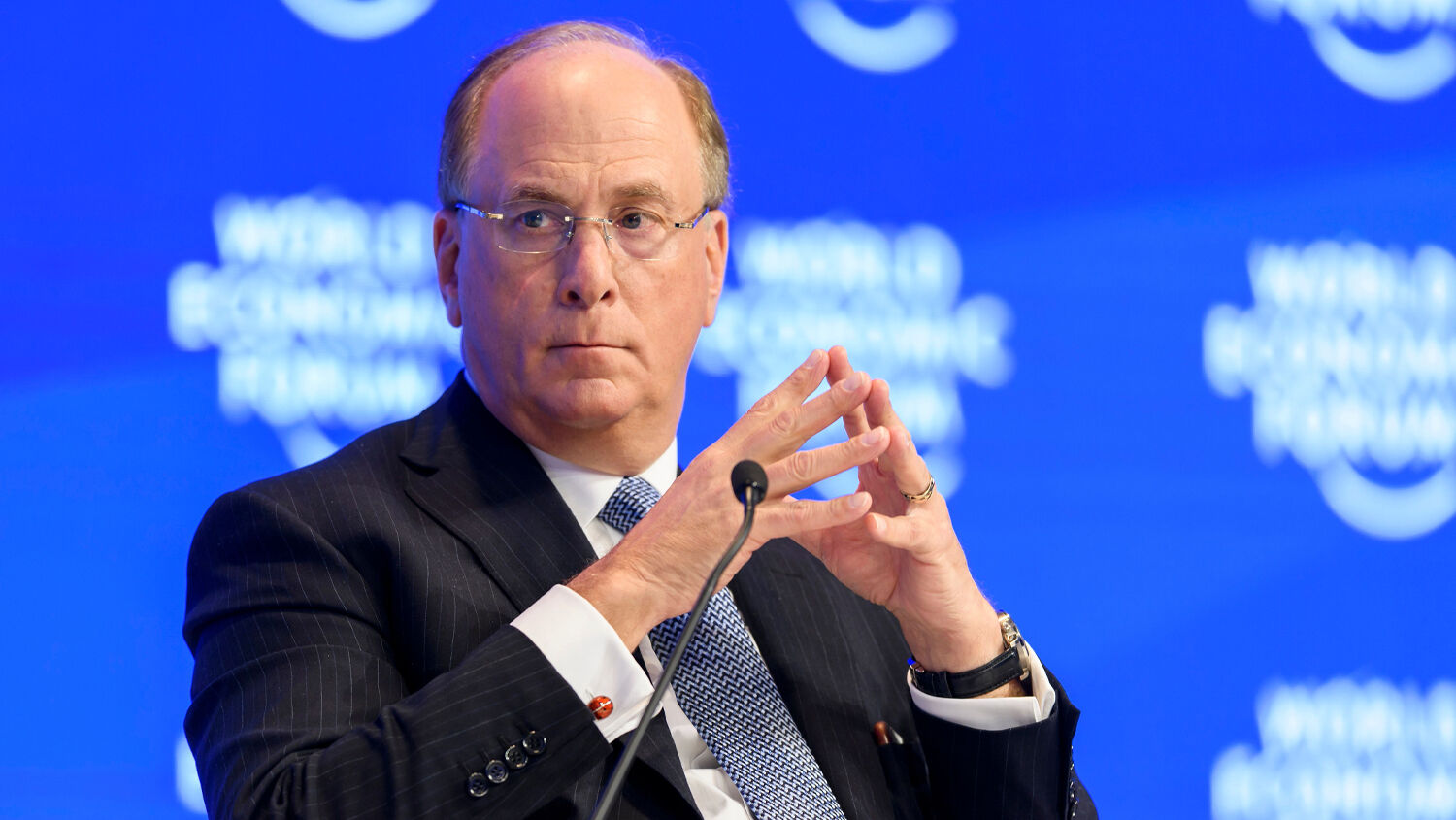 Former United States President Barack Obama famously stated his goal of “fundamentally transforming the United States of America.” In this mission, he has had many supporters. Few are more important than Larry Fink.

Fink heads one of the world’s most influential companies: BlackRock. This company manages $10 trillion of assets—the size of Japan’s and Germany’s annual economic output combined. As the government prints money to keep the economy afloat, BlackRock is an essential partner, managing that cash. It’s so embedded in the U.S. Treasury that Bloomberg has called it a “fourth branch of government.” Thanks to its revolving door of personnel, rotating between left-wing administrations and BlackRock corporate headquarters, it has more influence in the Treasury than any financial company in history.

Fink is open about what he wants to do with this influence. In a Jan. 14, 2020, open letter addressed to ceos, he stated, “I believe we are on the edge of a fundamental reshaping of finance.”

Fink is leader of the esg movement, which believes investment shouldn’t simply be about making money, but rather it should support environmental, social and governance goals. Fink has a lot of money to invest.

The idea of caring capitalism sounds great. But Fink is also a huge fan of investing in China. His social goals don’t stretch as far as protecting 1 million Uyghurs in concentration camps. Instead, esg investing is about a “fundamental reshaping of finance” and the world.

Asset management companies like BlackRock are not as famous as Apple, Google or General Motors. But they can influence huge numbers of businesses. Individuals, businesses, even governments have BlackRock manage their pension funds. It controls where these funds go and can deny businesses access to billions of dollars in investments.

BlackRock is one of the “big three” passive asset managers—Vanguard and State Street being the other two. These three own 22 percent of the average S&P 500 company.

Passive asset managers used to be just that, passive. They don’t pick and choose which companies to invest in; passive funds put a bit of money in all of them. Historically, it’s been a safe investment strategy.

But now BlackRock and others are using the fact that they own substantial portions of these companies to demand political changes in the companies.

The esg movement tries to push businesses to the left. Support Black Lives Matter or build windmills, and you get a good esg grade. Oppose the leftist agenda, and some of your biggest investors will oppose your every move.

For example, last year, BlackRock and Vanguard backed a movement to replace three Exxon board members with activists opposed in principle to fossil fuels. Thanks to the switch, the company is considering the adoption of a net zero target and the cancellation of major fossil fuel projects around the world.

Stacey Lenox at PJ Media described the power this gives BlackRock, writing: “The federal government no longer needs to pass the Green New Deal; BlackRock’s investment criteria will do it for them.” Those who don’t meet these criteria will see BlackRock, alongside other giant shareholders, voting against them in directors’ meetings.

In his latest letter to ceos, Fink wrote: “Every company and every industry will be transformed by the transition to a net zero world. The question is, will you lead, or will you be led?”

Fink and friends are also pushing “diversity.” According to comments obtained by Fox News Business in 2019, Fink told BlackRock that he would be implementing an aggressive diversity program, ensuring that a “bunch of white men” would no longer be in charge.

“This isn’t about diversity,” one anonymous BlackRock executive told Fox. “It’s about identity politics and virtue signaling that a ceo of a public company shouldn’t be engaged in.”

They push these policies on other companies too. In December, BlackRock said it wants boards to be 30 percent diverse and have at least one member from an “underrepresented group.” Goldman Sachs Group has a similar target. Lack of diversity was a major reason for voting against directors in the last few years

In his book The Dictatorship of Woke Capital, Stephen Soukup writes that Fink “is a crusader, a man on a mission who is bound and determined to use the power that other people’s money—your money, perhaps—gives him to impose his beliefs on the capital markets and, by extension, on the nation more generally.”

Yet none of these concerns tamper Fink’s enthusiasm for investing in China—one of the most polluting and least “woke” countries on Earth. Last June, BlackRock became the first foreign business licensed to start its own mutual-fund business in China. It attracted $1 billion from Chinese investors in its first week. Visiting China in 2019, Fink told the nation’s top financial officials that BlackRock would put China first when investing there, saying that it should be a Chinese company in China.

“I continue to firmly believe China will be one of the biggest opportunities for BlackRock over the long term, both for asset managers and investors,” he told shareholders.

“BlackRock’s hypocrisy speaks for itself,” wrote RealClearPolitics, “punishing American companies that decline to apply entirely voluntary standards while being mute about Chinese companies’ lack of audit oversight and enforcement. There could hardly be a more blatant case of double standards.”

Perhaps few investments illustrate that double standard more than BlackRock’s investment in PetroChina, the publicly listed arm of the state-owned China National Petroleum Company. BlackRock will not be placing any activist directors on that company. Yet it’s happy to profit from a state-owned company with a history of doing business with convicted war criminals.

So if this isn’t really about sustainability and diversity, what are Fink’s true goals? They can be seen by looking at his associates.

Fink was one of the first Wall Street executives to back Barack Obama for president. It’s not that others on Wall Street aren’t left-wing, but at first, many supported Hillary Clinton.

Since then, BlackRock has been invited into the heart of government. BlackRock executives were given key roles under the Obama administration. When Obama’s people lost their jobs with Donald Trump’s election in 2016, BlackRock was there for them. And then they moved right back into power when Joe Biden entered the White House.

BlackRock investment executive Brian Deese was a senior adviser to President Obama. He now leads the National Economic Council under Mr. Biden. Adewale Adeyemo was Obama’s senior international economics adviser, then chief of staff to BlackRock’s chief executive, and is now deputy treasury secretary for Mr. Biden. Michael Pyle, who worked in the Obama administration, has become BlackRock’s global chief investment strategist and will now be chief economic adviser to Vice President Kamala Harris. More than a dozen people went from the Obama administration to BlackRock.

No business has ever had this level of influence in the United States Treasury, not even Goldman Sachs.

Even some on the left are concerned with the level of power BlackRock now has. “BlackRock needs to be broken up and regulated,” director of research at the American Economic Liberties Project Matt Stoller said. “BlackRock ceo Larry Fink knows this, so he’s been storing hack Democrats on ice so they can go into the Biden administration and make sure that doesn’t happen.”

But there’s more to this than profit. Yes, being friendly with the Democrats could protect them against regulation. Eric Holder, Barack Obama’s “wingman,” was instrumental in ensuring no big financial firms or executives were punished in the aftermath of the 2008 financial crisis—and walked back to a legal practice funded largely by the same businesses he’d just gone soft on.

But the truth is, Fink’s goals align with Obama’s and the radical left. In this January’s letter to ceos, Fink wrote: “Capitalism has the power to shape society and act as a powerful catalyst for change.” Like Obama, he wants to fundamentally change America.

“When we harness the power of both the public and private sectors, we can achieve truly incredible things,” he said.

This is what Fink is all about. He’s part of a private sector that works hand in glove with the radical left. Governments can be voted out—as we saw in 2016. But BlackRock remained as a lifeboat for suddenly unemployed Obama economists.

“When Barack Obama promised to ‘fundamentally change America’ during his 2008 presidential run, few people knew what he really meant,” wrote Trumpet editor in chief Gerald Flurry. “He meant changing America from a constitutional republic. And what we are witnessing in the country today shows that, to an alarming degree, he succeeded!”

Capitalism with a conscience would be no bad thing. How many entertainment, media and Internet companies profit off family-destroying, sexualized content? The damage social media does to teens has been thoroughly charted, yet few are pulling out due to moral objections. Taking care of our physical environment is certainly a good and important thing for businesses to be doing. Yet the net zero movement embraces actions of questionable efficacy. So much of it merely pushes pollution businesses abroad, often making the problem worse in the first place.

This is not about ethics or environmentalism. They’re tools for transforming the countries.

God condemned these executives as those who “lie upon beds of ivory, and stretch themselves upon their couches, and eat the lambs out of the flock, and the calves out of the midst of the stall; That chant to the sound of the viol, and invent to themselves instruments of musick, like David; That drink wine in bowls, and anoint themselves with the chief ointments: but they are not grieved for the affliction of Joseph” (Amos 6:4-6).

The modern descendants of Joseph today are Britain and America (see our free book The United States and Britain in Prophecy for more information). He condemns the rich who enjoy lavish lifestyles and don’t care that their country is being destroyed. This is why businesses like BlackRock will tear down American companies while building up China.

Many involved in this may not fully understand this agenda. But the Bible is clear: There is a devil, an evil spirit being who works to harm mankind and fights fiercely against God’s plan. The modern descendants of Israel have played a role in that plan, and so they are the target for that attack. Satan is working to destroy Britain and America. Barack Obama and the radical left play a key role in that. So do their fellows in “woke capitalism.”

This is more than a political or business war. It’s a spiritual war—and so the key to understanding aren’t the newspapers or investment guides. It’s the Bible. Its scriptures detail why God is allowing this war to happen, how it will end, and what you can do about it. Mr. Flurry’s article “Barack Obama in Bible Prophecy” is a great starting place to understand this warfare.