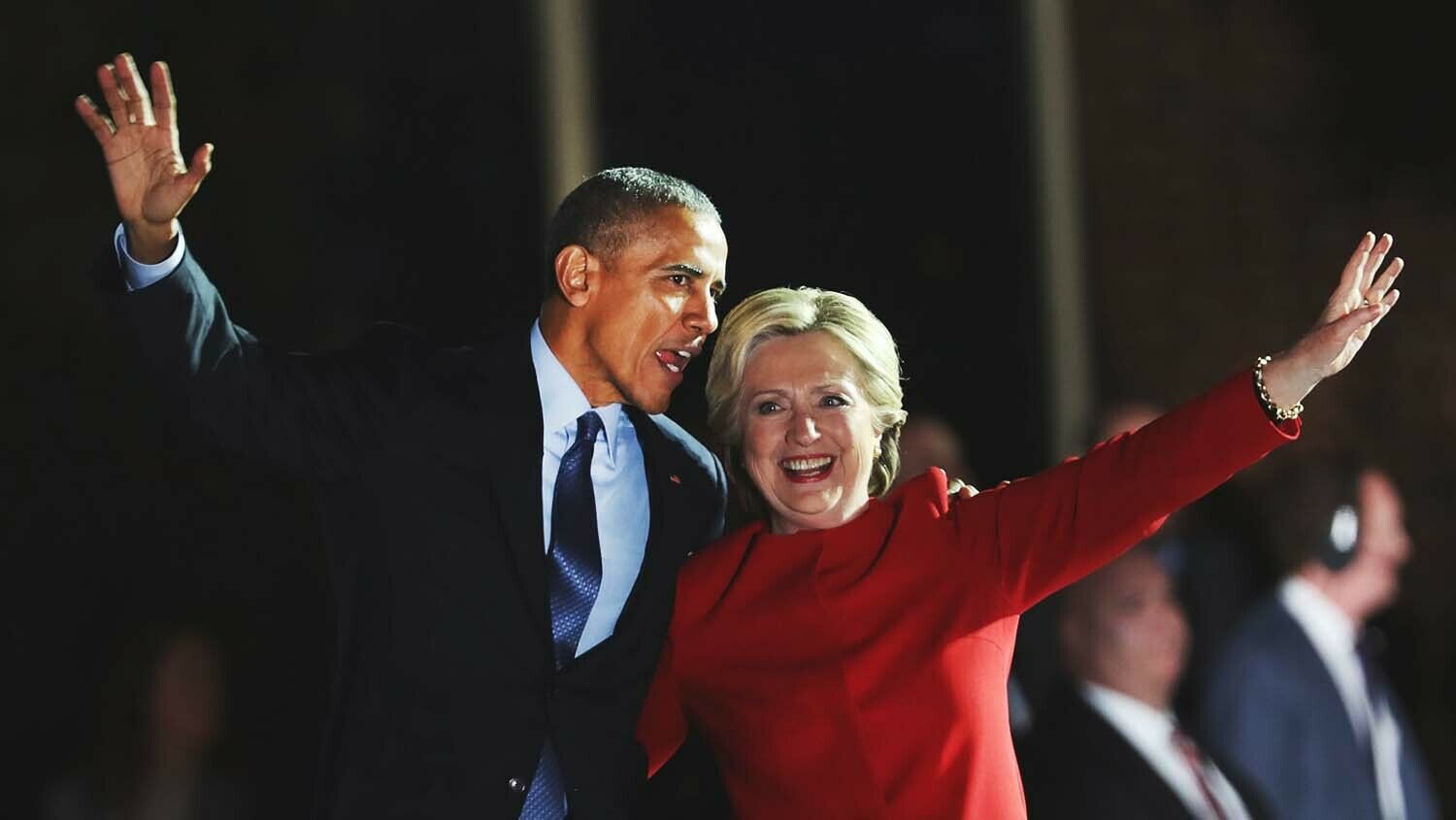 ‘This is a scandal far greater in scope and magnitude than Watergate.’

Hillary Clinton’s campaign employed hackers and lawyers to spy on Donald Trump at Trump Tower before he was elected president. And the campaign continued spying on Donald Trump at the White House while he was president. This revelation comes from evidence collected by Special Counsel John Durham. Clinton’s spying operation also fabricated an accusation against Trump that he had colluded with Russia to win the 2016 election.

Think about it: A presidential candidate who was defeated in a legitimate election actually hired people to breach national security and create a false narrative in an effort to steal the election after the fact! Rep. Mike Turner, the ranking Republican on the House of Representatives Intelligence Committee, told Fox News that the Clinton campaign tried to “frame the president of the United States as having Russia ties” and that the Durham filing proves it. Donald Trump issued a statement asserting, “What Hillary Clinton and the radical left Democrats did with respect to spying on a president of the United States, even while in office, is a far bigger crime than Watergate.”

Watergate is the name of the 1972–1974 scandal that Democrats used to bring down a president. It is one of the best-known scandals of our lifetimes. News media corporations celebrate it as legendary.

This is bigger than that.

Those same corporate news media covered the Trump-Russia accusation nonstop, for years, including all the details of Special Counsel Robert Mueller’s investigation into it. Right up until—and even after—Mueller finally, dubiously, awkwardly closed his investigation by providing zero proof of Russian collusion.

Now we have an accusation that is obviously just as grave. The stakes are just as high. A special counsel, John Durham, is investigating. But the silence is deafening. News executives and reporters are taking great pains to avoid this crucial topic as much as possible. So it is up to sites like theTrumpet.com to shine light on the deep corruption now being exposed.

Based on Durham’s investigation, a grand jury indicted former Clinton campaign lawyer Michael Sussmann in September 2021 on charges of lying to a federal agent. The indictment alleges that he met with the Federal Bureau of Investigation general counsel at fbi headquarters in Washington, D.C., less than three weeks prior to the 2016 election and provided what he claimed was evidence that the Trump Organization was working with a Russian bank that had links to the Russian government. He claimed he was doing so as a good citizen rather than as a paid political operative.

Sussmann has pled not guilty, but part of Durham’s new motion on February 11 states that Sussmann was actually working for at least three clients: Tech Executive-1, Internet Company-1 and the Clinton campaign. It states that Sussmann’s “billing records reflect” that he “repeatedly billed the Clinton campaign for his work on the Russian Bank-1 allegations.” It also states that Tech Executive-1, which numerous reports have identified as Rodney Joffe, used his firm to hack into servers belonging to Trump Tower and servers belonging to the White House. Joffe and the firm from which he retired in 2021, Neustar, have not been charged, but the picture emerging is that Sussmann promised Joffe a top cybersecurity position in the government when Democrats took power in return for his hacking services. The motion reads, in part:

Tech Executive-1 tasked [a team] to mine Internet data to establish “an inference” and “narrative” tying then candidate Trump to Russia. In doing so, Tech Executive-1 indicated that he was seeking to please certain “vips,” referring to individuals at Law Firm-1 and the Clinton campaign.

The government’s evidence at trial will also establish that among the Internet data Tech Executive-1 and his associates exploited was domain name system (“dns”) Internet traffic pertaining to (i) a particular health-care provider, (ii) Trump Tower, (iii) Donald Trump’s Central Park West apartment building, and (iv) the Executive Office of the President of the United States (“eop”). … Tech Executive-1 and his associates exploited this arrangement by mining the eop’s dns traffic and other data for the purpose of gathering derogatory information about Donald Trump.)

Do you remember Donald Trump claiming that Trump Tower was being spied on? Democrats and the corporate media ridiculed him for it. Now the Durham special counsel says it has specific evidence that servers belonging to Trump Tower and even the White House were being hacked by Clinton’s people. We also now know that at the same time the Obama administration was using a ridiculous false dossier, bought and paid for by the Clinton campaign, to get a secret warrant to spy on Donald Trump. We know that the spying continued even after Donald Trump became the duly-elected, sitting president of the United States!

Right now, the Clinton campaign is in the spotlight because it is the organization that paid for the false dossier and for Michael Sussmann to work with Rodney Joffe and Neustar to infiltrate Trump Tower and the White House. But the Clinton campaign obviously needed a lot of help from “deep state” agents within the administration to commit such high-level crimes. And that administration was (and is) controlled by Barack Obama.

It is a documented fact that Obama’s fbi knew about the Clinton campaign’s role in compiling the Steele dossier and spying on the incoming Trump administration.

fbi agent Peter Strzok openly told the woman with whom he was committing adultery that the agency’s probe into the Russia accusation was an “insurance policy” in case Donald Trump won the 2016 presidential election.

The Watergate scandal was a low-level burglary at Democratic National Committee headquarters that the White House tried to cover up and resulted in President Richard Nixon’s resignation. Russiagate was a high-level espionage operation involving people connected to a failed presidential candidate and to the outgoing president to frame a duly-elected president of crimes he did not commit. Its purpose was to empower Democrats to steal control of the nation, even after President Trump took office.

Donald Trump was not exaggerating when he responded this way to the recent revelations: “This is a scandal far greater in scope and magnitude than Watergate, and those who were involved in and knew about this spying operation should be subject to criminal prosecution. In a stronger period of time in our country, this crime would have been punishable by death.”

The radical Democrats knew they were committing a brazen crime, but that did not make them any less brazen. On Oct. 31, 2016, Hillary Clinton posted on Twitter: “Computer scientists have apparently uncovered a covert server linking the Trump Organization to a Russian-based bank.” She told the world this baseless accusation, without telling us that these “computer scientists” were ultimately controlled by her campaign, and without telling us that the Russia-Trump accusations in the Steele dossier were ultimately controlled by her campaign. No one would have cared whether or not Trump worked with Alfa Bank if it weren’t for the false accusation made in the Clinton-initiated Steele dossier. The Clinton campaign threw out these accusations as it was illegally trying to hack its way to something Russia-related that looked incriminating.

The radical left is out to destroy traditional America by any means necessary. That is the stated goal of the socialists. They are far more than a political party.

“The ‘Communist Party’ is merely a trick term to pull the wool over our eyes and deceive us—a means of getting a fifth column into our midst—of getting the enemy’s government into our very midst, leading us to accept it as part of our government,” Herbert W. Armstrong wrote in 1962. “Its only object is to destroy our government. Of course, if it could do this peaceably at the polls, it would—but it knows it can’t, so it does stand for the violent overthrow of the United States government.”

The radical Communists who have gained control of the Democratic Party are using all means, legal and illegal, to destroy Donald Trump and to steal the presidency. They are exerting enormous control throughout the government. They are willing to spy—and worse—to solidify that control.

Yet somehow, the truth is coming to light. Slowly but surely, John Durham and others are uncovering how the radicals hijacked America. And soon you will see how much it traces back not just to Hillary Clinton, but, most of all, to Barack Obama.

The truth coming out is not an accident, and it certainly isn’t thanks to a strong conservative movement in politics or even among the people. It is thanks to the fact that God is involved, and He is about to give America one last chance to face reality. A prophecy in Amos 7 states that God will pass by America one last time, and the only way for America to survive is for Americans to repent of their sins (verse 8). Unbelievable, horrible things are happening to our country, not just because of radical leftists but because, as Abraham Lincoln warned us, “we have forgotten God.”

“We have been watching this prophecy since June 1990, in the second issue of the Trumpet we ever produced,” my father wrote regarding Amos 7 (“Why I Still Believe Donald Trump Is Coming Back”). “It speaks of a time when God is preparing to measure the destruction of end-time Israel—the United States and Britain—and He says, ‘I will not again pass by them any more’ (verse 8). This is just before severe correction comes on these nations if they don’t repent. They are receiving their final warning. … So the entire context of God saying I will not again pass by them anymore is the time of ‘Jeroboam’—an end-time antitype of King Jeroboam ii of Israel.”

This prophecy is why we have consistently insisted that President Trump will return to power. We do not know exactly how this will unfold, but it looks like the Durham investigation may expose a lot of corruption. His indictment of Igor Danchenko exposed the Obama administration’s role in compiling the bogus Steele dossier and the Michael Sussmann indictment is exposing the Obama administration’s role in spying on the Trump White House. Keep watching the indictments as they move closer and closer to the real epicenter of the Russiagate scandal: Barack Obama.

Even many Democrats are growing concerned about the open Communist tactics the radical left is using to multiply the debt, create inflation, upset supply chains, flood the country with illegal immigrants, push parents out of their children’s lives, dismantle family, and even deny fundamental sex differences. Life in America continues to get worse, radicals continue to amass and exert power, but at the same time, God is making sure more people can wake up to the fact that Obama’s regime is really just a cabal of Communist monsters dead set on destroying America’s constitutional system of government! We are in a horribly weak period of time in this country, but God is giving us, giving you, one last chance to repent.