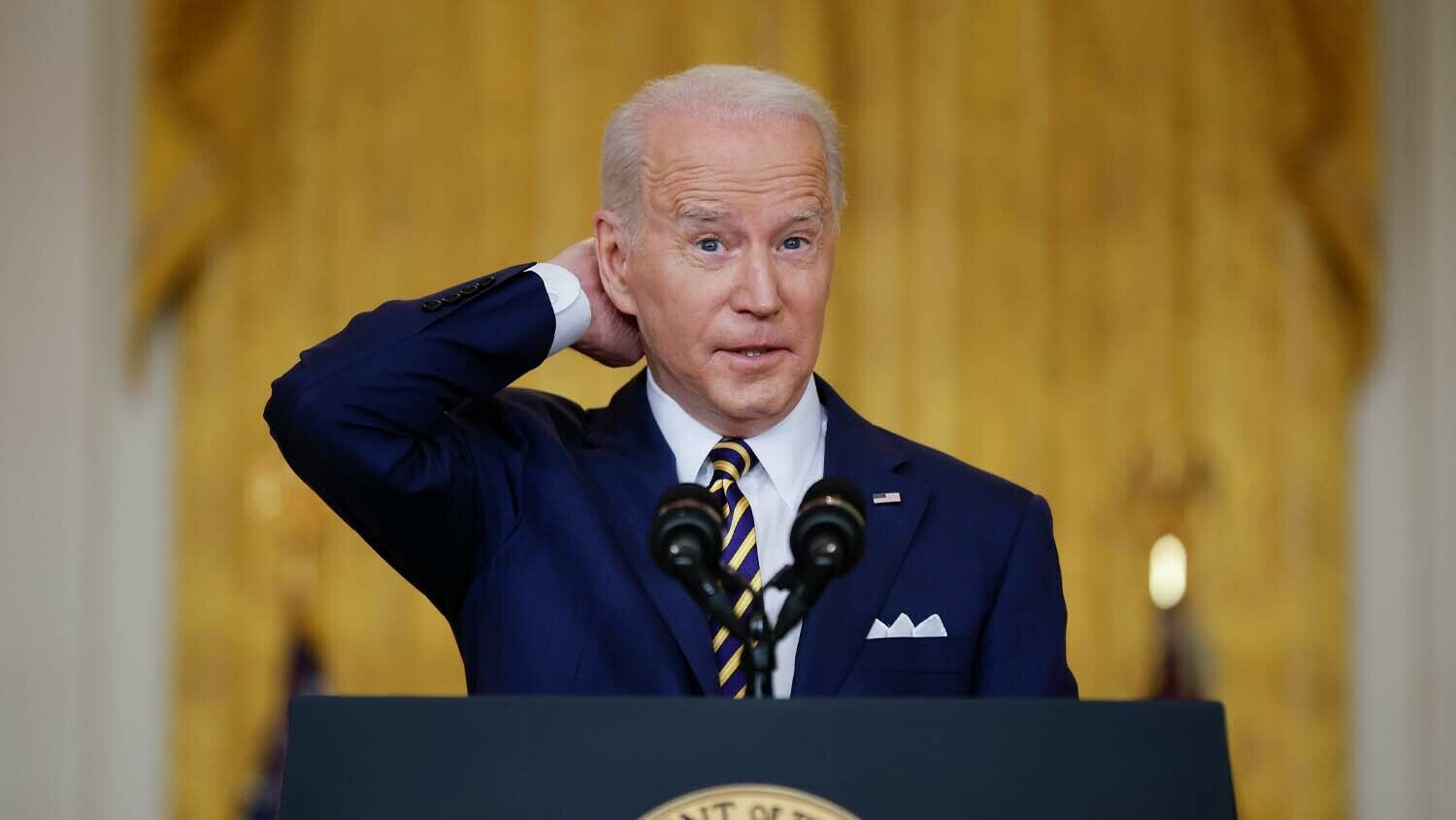 Joe Biden delivers an opening statement during a news conference in the East Room of the White House on January 19.
Somodevilla/Getty Images

Marked by a strangely appropriate and predictably disastrous press conference.

Ahead of his one-year anniversary of taking the White House, Joe Biden did something that, for him, has been rare: He held a press conference. Biden has become infamous for dodging questions. He has participated in fewer first-year press conferences and interviews than any president since Ronald Reagan in 1980, who was recuperating from a gunshot wound. When he does take questions, he lets on that “they” have given him a preapproved list of reporters to call on and makes remarks that he’ll “get in trouble” if he goes off script. Some suspect that he actually has a script of some kind and that the reporters he calls on do too.

So it was strangely fitting that Biden’s one-year anniversary should be marked by a press conference (his 10th) that was disastrous. In the White House briefing room on January 19, he dodged questions from reporters for two hours. He made farcical claims that his first year had been harder than any other incoming president, that he had made “enormous progress,” and that he had “outperformed what anyone thought would happen.” “Can you think of any other president that has done as much in one year?” he shot back to one reporter. “Name one.”

Immigration and inflation are Biden’s two weakest issues with Americans, so he was undoubtedly grateful that he was not asked a single question about border control during his press conference. One wonders whether this agreement was part of the “script.”

Biden used the press conference, in part, to tell more lies about inflation. He again insisted that his plan to create and spend almost $2 trillion more to “Build Back Better” would lower inflation, despite the obvious fact that creating more dollars makes all dollars worth less.

Yet one thing you can say about the pretender to the throne, and those controlling him, is that they are working hard. Not to salvage or build up America but to consolidate their power. They have pushed radically unconstitutional policies, economic sabotage, progressive tyranny, the Freedom to Vote Act to legalize massive amounts of mail-in ballots that are prone to fraud, and the John Lewis Voting Rights Advancement Act to dramatically reduce scrutiny of these fraud-prone ballots. Biden and, more importantly, the radicals behind him know that unless they legalize election fraud in a hurry, they could lose their tyrannical grip on power as soon as the next election, if not before.

Many Americans can’t believe their eyes, but they need to: The radicals who have seized control of the federal government are trying to make that seizure permanent.

Analysts like historian Victor Davis Hanson are warning that the United States may be about to collapse. “Hard left ‘woke’ ideology has all but obliterated the idea of a border,” he wrote in “Is America Heading for a Systems Collapse?” “Millions of impoverished foreigners are entering the United States illegally—and during a pandemic without either covid-19 tests or vaccinations. The health bureaucracies have lost credibility as official communiques on masks, herd and acquired immunity, vaccinations, and comorbidities apparently change and adjust to perceived political realities. After decades of improving race relations, America is regressing into a premodern tribal society. Crime soars. Inflation roars. Meritocracy is libeled, and so we are governed more by ideology and tribe. … Our path to systems collapse is not due to an earthquake, climate change, a nuclear war, or even the covid-19 pandemic. Instead, most of our maladies are self-inflicted.”

Biden thinks that he has made “enormous progress” during his first year, but only because his goal is to execute Barack Obama’s dream to fundamentally transform America into a socialist state. He wants to destroy America’s culture by flooding the nation with migrants; he wants to destroy America’s economy by printing trillions of dollars out of thin air. When our constitutional form of government and free-market economy are in shambles, Obama will make an even stronger move to force Americans into technocracy and socialism.

That may sound shocking, but take a minute to remember the “progress” Obama pushed during his eight years in the White House. He was—and is—fundamentally transforming America. We should have seen it coming. So much of Obama’s background, which the media compliantly minimized, indicated that he hated what America is and was. He taught a class, after all, on the political approach of Saul Alinsky.

“[T]aking a new step is what people fear most,” Alinsky wrote in Rules for Radicals, a book he introduces with praise for Lucifer. “They must feel so frustrated, so defeated, so lost, so futureless in the prevailing system that they are willing to let go of the past and chance the future. … A revolutionary organizer must shake up the prevailing patterns of their lives—agitate, create disenchantment and discontent with the current values, to produce, if not a passion for change, at least a passive, affirmative, non-challenging climate.”

Obama and the other radicals behind Joe Biden are tearing down America by design.

During his voting rights speech in Georgia, Biden said anyone opposed to the Freedom to Vote Act or the John Lewis Voting Rights Advancement Act was as racist as George Wallace, Bull Connor and Jefferson Davis. These are not the words of a president trying to unite America but the words of a tyrant trying to shame people into dropping their opposition to rigging elections.

Barack Obama and his accomplices are destroying the very country they were born into and attempting to turn it into something akin to Cuba, Venezuela or the Soviet Union. Based on Bible prophecy, my father’s booklet America Under Attack explains that in our lifetimes, three leaders are rising up like the ancient king Antiochus Epiphanes. Like Antiochus, each gains power by pretending to be someone he is not. A spiritual Antiochus “cast down the truth to the ground” inside God’s one true Church. A political Antiochus is casting down truth in America. And a foreign Antiochus is coming who will obtain power in Europe “by flatteries” and lead it to destroy America, Britain, Israel and other nations.

Perhaps the clearest description in prophecy of the work of an Antiochus appears in Daniel 8. Verses 9-12 describe a spiritual force that God allows to perpetrate evil due to the sins of the people. “[A]n host was given … by reason of transgression, and it cast down the truth to the ground; and it practised, and prospered.”

Strong’s Concordance defines “host” as a mass of persons, especially one organized for war—an army. It can refer to an army of demons, angels or men. Here it refers to demons and evil men who attack the truth. In Obama’s case, this host includes “deep state” bureaucrats, intelligence agents, military leaders, radical congressmen, media moguls, tech entrepreneurs, Wall Street financiers and even foreign spies who work together to attack the remaining constitutional, biblical-related truth in America’s culture and government. They work together to make people “feel so frustrated, so defeated, so lost, so futureless in the prevailing system that they are willing to let go of the past and chance the future.”

But God is at work as well. As my father explained in “Saving America From the Radical Left—Temporarily” and “Who Is the Modern-Day Jeroboam?”, God used King Jeroboam ii to temporarily save the kingdom of Israel from destruction in the eighth century b.c. He wrote that 2 Kings 14:26-27 and Amos 7 are prophecies for today: God will use a modern type of Jeroboam ii to save America—temporarily. That modern fulfillment is President Donald Trump.

But right now, we are still in the very bitter “affliction of Israel.” We are under the agenda and power of the political Antiochus, Barack Obama. The radicals are out in the open, and God is exposing them.

But once again, the worst tragedy is the sins of the people. The radicals are still holding onto power and tyrannically exerting that power because the people are too weak to stop them: And the people are too weak to stop them because of their own personal sins. As we saw in God’s true Church, when people do not deeply love the truth, they eventually come to believe lies (2 Thessalonians 2:9-12). The radical assault on America’s Bible heritage is so extreme that if God did not step in to save America from the radical left temporarily, the radicals would be “legally” rigging every election for the foreseeable future, until elections become an ironic joke or an artifact of history. Without God saving America “by the hand of Jeroboam,” you can look forward to a one-party surveillance state, like Communist China.

But here is what even conservatives still fail to understand. The battle for America’s future is spiritual. It’s not just about polls or bills or trade or money or immigration, elections or even wars. It is about a choice that each of us makes every day: Whether or not to believe and obey God.

America is mortally vulnerable to the radicals “because of transgression.” We are weak not just because of their egregious sins but because of our own sins, which we tend to view as a lot less egregious. But because we are not obeying God, recognizing Him in our history or even believing in His Word or even His existence, we are suffering. This is exactly what God warned our ancestors in ancient Israel.

Leftists are making “enormous progress” in destroying the nation that God gave us and making Americans feel futureless. They are consolidating their power to the point that they are looking to secure their power indefinitely.

What they don’t realize and what most conservatives still don’t realize is that God is correcting America, and this correction will grow far more severe! My father has boldly and consistently said, based on Bible prophecy, that Donald Trump will return to office. This will produce another revival of sorts. But the purpose for that revival is to give all Americans (yes, even conservatives) an opportunity to repent of our sins! If we do not, then, just as our ancestors under Jeroboam ii, we will indeed be futureless.