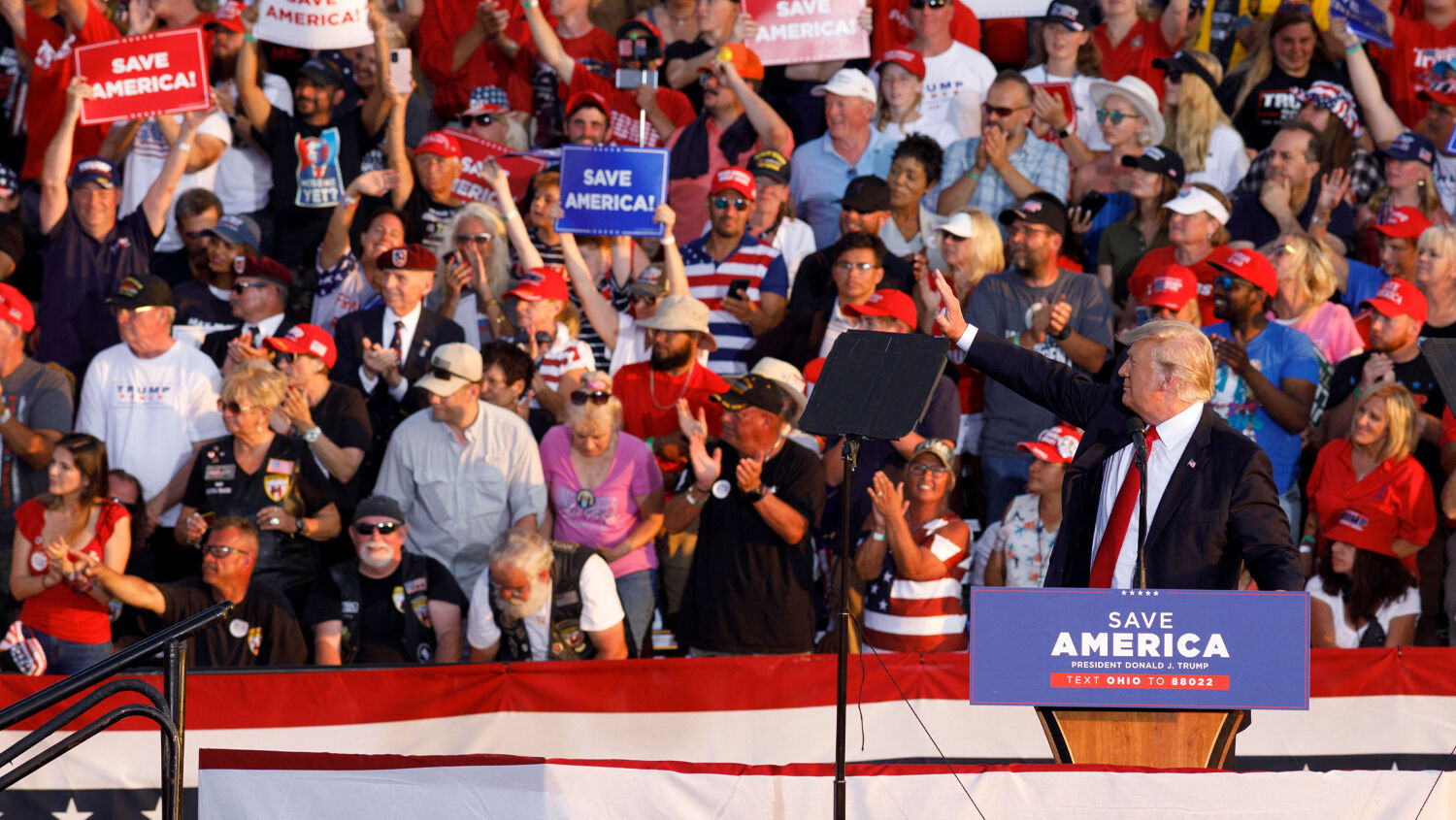 Democratic elites say that if the 45th president runs for office again, our democracy will die. Is that really what they are afraid of?

Americans are realizing that Joe Biden’s regime is illegitimate. His ratings have dropped to a new low, with some polls showing a disapproval rating nearing 60 percent. The December 12-14 Economist-YouGov poll found that about 18 percent of Republicans believe President Donald Trump could be reinstated as president by the end of this month. But diehard Trump supporters are not the only ones who think he could soon return.

Meet the Press host Chuck Todd led a roundtable discussion on December 12 on nbc that focused on the very real possibility that Trump will make a comeback.

Todd read from “Trump’s Next Coup Has Already Begun” in the Atlantic, which claimed, “Trump and his party have convinced a dauntingly large number of Americans that the essential workings of democracy are corrupt, that made-up claims of fraud are true, that only cheating can thwart their victory at the polls, that tyranny has usurped their government, and that violence is a legitimate response.” Analyst John Heilemann asserted that this is not an exaggeration, that many Trump supporters are part of “a mass movement in America in favor of political violence,” and that there are “30 million people right now who are ready to take up arms” against the Biden regime.

Liberal Republicans like Liz Cheney have the same message. So do three retired United States Army generals, Paul Eaton, Antonio Taguba and Steven Anderson, who wrote in a Washington Post editorial, “As we approach the first anniversary of the deadly insurrection at the U.S. Capitol, we … are increasingly concerned about the aftermath of the 2024 presidential election and the potential for lethal chaos inside our military, which would put all Americans at severe risk.”

The press have done everything they possibly could to destroy Donald Trump and his supporters, and they have failed. Now they are visibly fearful that their false narratives are being exposed.

These analysts and other liberals know that the Biden administration is a disaster. It is obvious that Americans disapprove of his actions on inflation, immigration, coronavirus, school boards, crime, Hunter Biden, Afghanistan, Russia and other issues. And Donald Trump is waiting in the wings.

President Trump moved out of the White House 11 months ago (after liberal television commentators like these claimed he would refuse to leave and possibly incite violence). He has been forced out of power. But Democrats are rattled. Why? Because they fear that the election fraud will be exposed. As President Trump said recently, the insurrection was on Nov. 3, 2020: Election Day.

After seizing power in the White House and in Congress, the liberals have pushed an even more revolutionary agenda than they did when Barack Obama was president. They are trying to federalize American elections, legalize the fraud committed in the 2020 election, and employ the U.S. military to help silence anyone who stands up to their illegal, unconstitutional seizure of the government.

“What the panel of John Heilemann, Marianna Sotomayor, Kimberly Atkins Stohr and Brendan Buck really fear is the pesky system within our constitutional republic we call ‘federalism.’ They need to keep their attacks against Donald Trump cast in the role of eliminating baby Hitler simply to avoid confronting the flaws in their own ideological arguments. They fear freedom. They need the collective. Individual liberty is against their own sense of self and purpose. If you listen through their nonsense (not for the faint of heart), all of the panel apoplexy boils down to individual states in control of their own elections,” reported Conservative Treehouse.

Biden supposedly won more votes than any presidential candidate in U.S. history; yet these corporate media ideologues do not carry themselves as if they are supported by the American people. They are, to varying degrees, guilty of a coup! And although they have power and are using it radically, aggressively and urgently, they are also constantly looking over their shoulders, fearful that the treason will be exposed.

Former Democratic presidential candidate Hillary Clinton recently said, “If I were a betting person right now, I’d say Trump is going to run again. He seems to be setting himself up to do that, and if he’s not held accountable, he gets to do it again. I think that could be the end of our democracy.”

You read that right! Hillary Clinton wants you to think that if a particular politician is allowed to run for office in a free and fair election, democracy will be over. She wants him “held accountable,” which means barred from running for office. The only way to stop him from running would be for the federal government to ignore the Constitution and start deciding which political candidates the American people are allowed to vote for.

Clinton likewise lacks the air of someone who has the confidence of the people, because she knows the only way to keep Donald Trump out of the White House is to deny the people a voice in a free and fair election. (She also knows she is being investigated for election-related crimes in her 2016 campaign against Trump.)

“We are getting a hard look at just what the radical left is willing to do in order to seize power and stay in power,” my father, Trumpet editor in chief Gerald Flurry, wrote in “Saving America From the Radical Left—Temporarily.” “They have no respect for the rule of law! They believe they are above the law. It is no exaggeration to say that such contempt for the nation’s founding principles is a threat to the Republic.”

But Americans are finally waking up to the anti-American spirit of Biden’s administration. And they are increasingly aware that such a spirit could have stolen the election in the first place.

In his article “Why I Still Believe Donald Trump Is Coming Back,” my father wrote that Bible prophecy reveals Donald Trump is actually an end-time type of King Jeroboam ii of ancient Israel. He also explained a Bible prophecy, to be fulfilled in the time of Jeroboam, in which God promises to temporarily save America from destruction.

Amos 7:8 states, “And the Lord said unto me, Amos, what seest thou? And I said, A plumbline. Then said the Lord, Behold, I will set a plumbline in the midst of my people Israel: I will not again pass by them any more.” God warns that, because of our sins, He will measure out the destruction of America and other nations that descended from ancient Israel.

My father has recently emphasized that Amos 7 begins by prophesying the two presidential terms of Barack Obama. Treason against America permeated his eight years in office, his attempt to help stop Trump from being elected, “deep state” subversion even after President Trump took office, stealing the 2020 election from the American people, and almost a year of pushing an even more radical agenda, still underway. As shown in Amos, God twice spared America from destruction. He saved it “by the hand of Jeroboam,” and that leader will have to “war” in some way to return to power (2 Kings 14:27-28).

These prophecies are why the Trumpet continues to assert that President Trump will return to power. We do not know exactly how this will unfold, but there is a real chance that nation-shaking fraud will be exposed long before the next election!