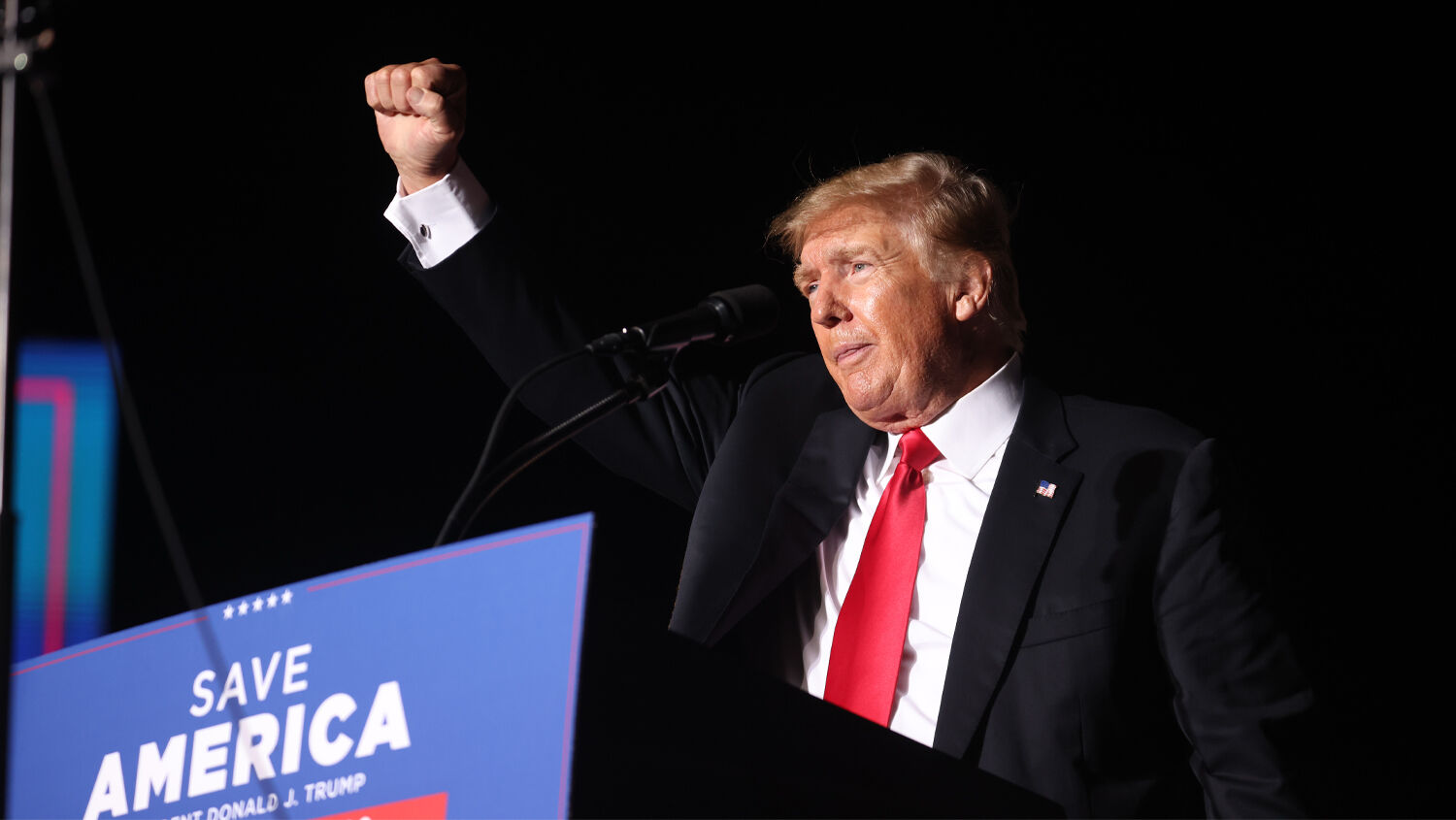 Former President Donald Trump speaks to supporters during a rally at the Iowa State Fairgrounds on October 9.
Scott Olson/Getty Images

All across America, Republican leaders are anticipating the 2022 midterm elections with tremendous optimism. Buoyed by positive poll numbers, the Republican triumph in the recent gubernatorial race in Virginia, the better-than-expected results in New Jersey—and the historically destructive leadership of Joe Biden—Republicans believe victory next year (and in 2024) is inevitable.

I’m no political guru, but the prevailing belief that regaining the House and Senate, and then the White House, is inevitable feels like a giant trap. A magnificent ploy designed to create a false sense of security and confidence, and more importantly, to distract people from what happened in 2020 and what will happen in 2022.

And many Republicans in name only (rinos) are scampering right into the trap. “What happened this week was historic,” said Republican Sen. Rick Scott in a November 7 Fox News interview. “We’re going to take the Senate” and “we’re going to do unbelievably in 2022.”

Texas Sen. Ted Cruz agrees. “The elections this week were enormously consequential,” he said. The elections in Virginia and New Jersey are “foreshadowing what’s coming next year in 2022.”

Confident that victory is in the bag, Republican elites say the party must now forget about the 2020 election and focus solely on 2022.

Rupert Murdoch, the boss of Fox News, delivered this message to shareholders just yesterday. “The current American political debate is profound, whether about education or welfare or economic opportunity. It is crucial that conservatives play an active, forceful role in that debate, but that will not happen if President Trump stays focused on the past. The past is the past, and the country is now in a contest to define the future” (emphasis added throughout).

Senate Minority Leader Mitch McConnell agrees. “It’s my hope that 2022 election will be a referendum on the performance of the current administration, not a rehash about suggestions of what may have happened in 2020,” McConnell stated in a press conference earlier this month. “We need to be talking about the future, not the past.”

Speaking on nbc’s Meet the Press, Asa Hutchinson, the Republican governor of Arkansas, warned that “relitigating 2020 is a recipe for disaster in 2022.” We need to focus on the future, he said, “the election is past. It’s been certified. The states made decisions on the integrity of each of their elections ….”

The magnitude of the ignorance and cowardice on display here is absolutely staggering.

These men ignore a simple yet pivotal question: After what happened in 2020, how can America have honest, lawful elections ever again?

A Rasmussen Reports survey from October showed that a majority of voters believe cheating affected the outcome of last year’s election. When asked, “How likely is it that cheating affected the outcome of the 2020 presidential election?”, 56 percent of respondents said it was “very or somewhat likely.” A remarkable 41 percent believe cheating was “very likely.”

On this issue, the majority is right. Over the past 12 months, evidence has surfaced all across the nation proving there was widespread cheating and corruption. Evidence gained via audits, witness testimony and video surveillance in multiple states, including Arizona, Georgia, Wisconsin and Pennsylvania—all states that Donald Trump “lost” by only a few thousand votes—have revealed incidents of ballot stuffing, ballot harvesting, ballot destruction, voting machine manipulation, mail-in vote manipulation and numerous other crimes and corruptions. In some instances, the fraudulent behavior impacted thousands, even multiple thousands, of votes—enough to have made a difference to the final election result.

All of this added up to a “targeted campaign to undermine election integrity in the 2020 elections,” wrote Bruce Oliver Newsome at American Greatness last month. “Across several states, with the help of numerous friendly institutions, the Democratic Party was able to change the way America votes, and manipulate how those votes were counted.”

It’s the giant boil on America’s face, the issue everyone sees and is aware of, but no one wants to discuss: The 2020 election was stolen!

Yet the Republican establishment somehow believes next year’s elections will be free and fair, that the pervasive cheating cannot and will not happen again. Where’s the evidence that it won’t happen again in 2022? There is none.

The only way the 2022 midterm elections can be free and fair is if the corruption is purged. The cheating and lies must be confronted, the elaborate networks of lies and deceit dismantled. The boil must be lanced if it’s going to heal.

And the only way this can happen is if the 2020 election steal is exposed! You have to properly diagnose a problem before you can treat it.

On Tuesday, the issue of the 2020 election came up in an interview between Mike Lindell and Donald Trump. Trump relayed how even some of his own “people” tell him to “forget about 2020 [because] you’re going to win [2024], you’re way up in the polls.”

When he hears this, Trump’s response is always, “We’re not going to have a country in three years …. [Look what Joe Biden] did in nine months. He destroyed our country.”

This man gets it. This is why Donald Trump is one of the few who won’t move on from the 2020 election. He knows that if America is going to have future elections, then it must confront what happened in the 2020 election!

And this is exactly what rinos say we must never do.

Perhaps more than anything else, this reveals just how wretchedly amoral, clueless and cowardly these people are. They all claim to love America and to believe in America. They all claim to love the Constitution and rule of law, to love democracy and the republic. But when America’s vital organs—including its election system and Constitution—are openly and violently attacked, they go silent. Even worse, they encourage the American people to forget about it, to move on, to focus on the future.

It’s probably safe to assume too, that in time, as the reality of Biden’s America sets in and the corruption and deceit of the radical left continues to be exposed—as we’re currently witnessing with the Steele dossier—the number of Americans willing to accept that the election was stolen will grow. Will this be enough to inspire rinos to revisit the 2020 election? Probably not.

In Isaiah 1, the prophet describes America (and Britain) in the end time and writes: “Ah sinful nation, a people laden with iniquity, a seed of evildoers, children that are corrupters: they have forsaken the Lord, they have provoked the Holy One of Israel unto anger, they are gone away backward. Why should ye be stricken any more? ye will revolt more and more: the whole head is sick, and the whole heart faint” (verses 4-5).

Isaiah is describing our leaders. “The ‘head’ refers to the leaders of modern Israel,” Gerald Furry writes in Great Again. “God says ‘the whole head is sick’! The minds of our leaders are sick with deceitful human reasoning that is anti-God! Their decisions are perverse and leading to greater and greater calamities!”

The rinos’ admonition to Americans to just forget the 2020 election is absolutely perverse! And unless something happens to prevent it, it will lead to calamity in the 2022 midterm elections. Shrinking in the face of abject evil only allows it to grow stronger. When God says “the whole heart is faint,” He is talking about spineless people and leaders who put personal gain before the country and doing what is right.

Strong, brave leaders confront evil, especially when it thrusts their nation into an existential crisis!

Mr. Trump has many imperfections, which Mr. Flurry has also explained in detail. But there is still much to admire about his leadership, including his courage, his love of America, and his readiness to confront the extraordinary evil responsible for America’s disastrous 2020 election.